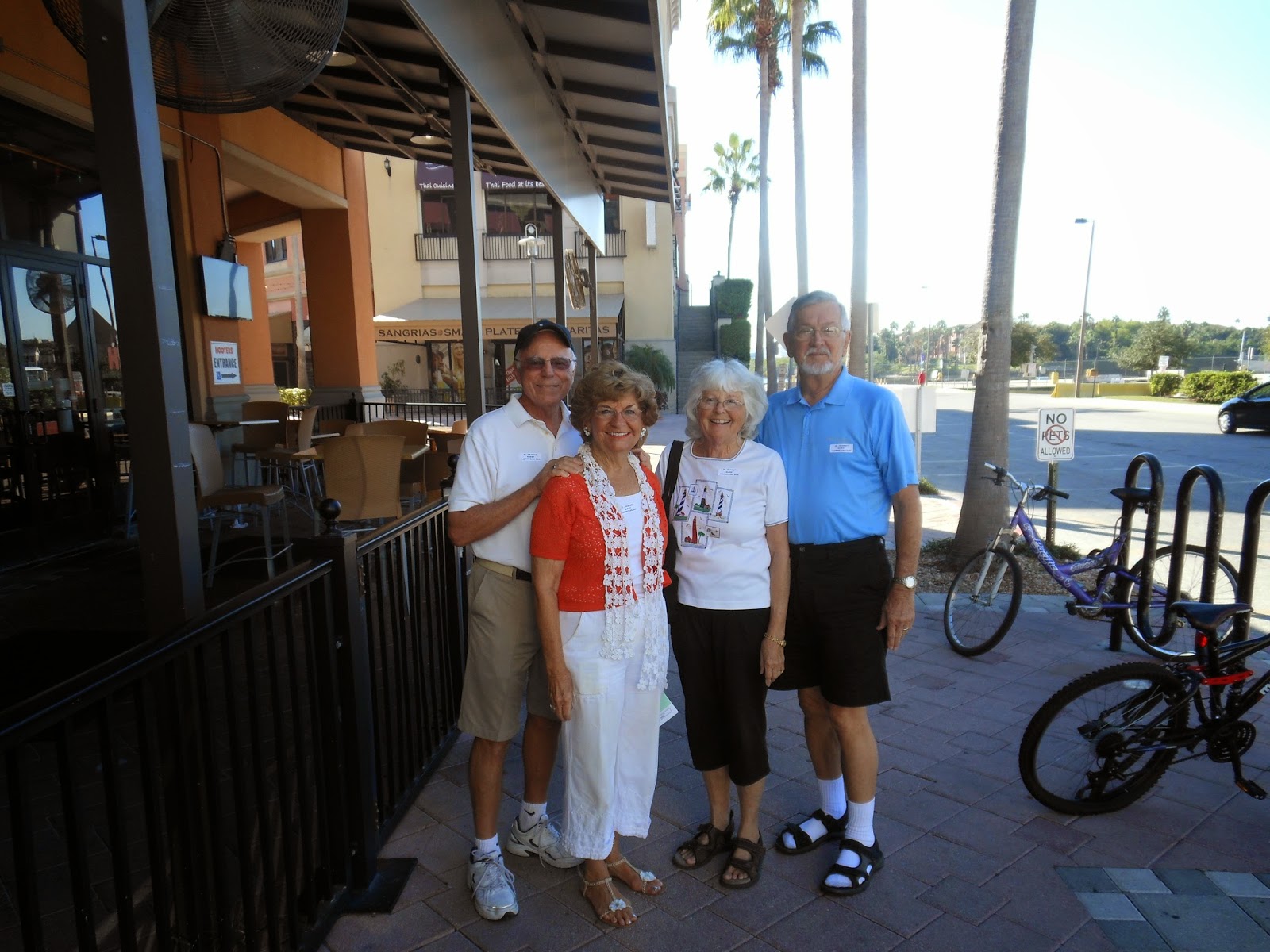 We arrived early Sunday morning, day number fifteen, for the end of the first part of our cruise.  We had a leisurely breakfast and then left the ship at ten o’clock with the intention of walking a block to the Aquarium during our down time in Tampa.  But…contrary to what we’d heard….rumors were that it was “free”….the $20.95 admission fee for each of us seemed extravagant as we only planned to be there for a short time.   So we continued walking around the port until eleven o’clock when the Tourist Office opened and everyone rushed in to shop!
From the time we tied up to the dock, everyone on board the ship had their cell phones in hand making calls to family and friends.  We were no exception and managed to call everyone in our family during the few hours that we were in Tampa.  Good to talk with each of them and find out the latest news on family and friends. 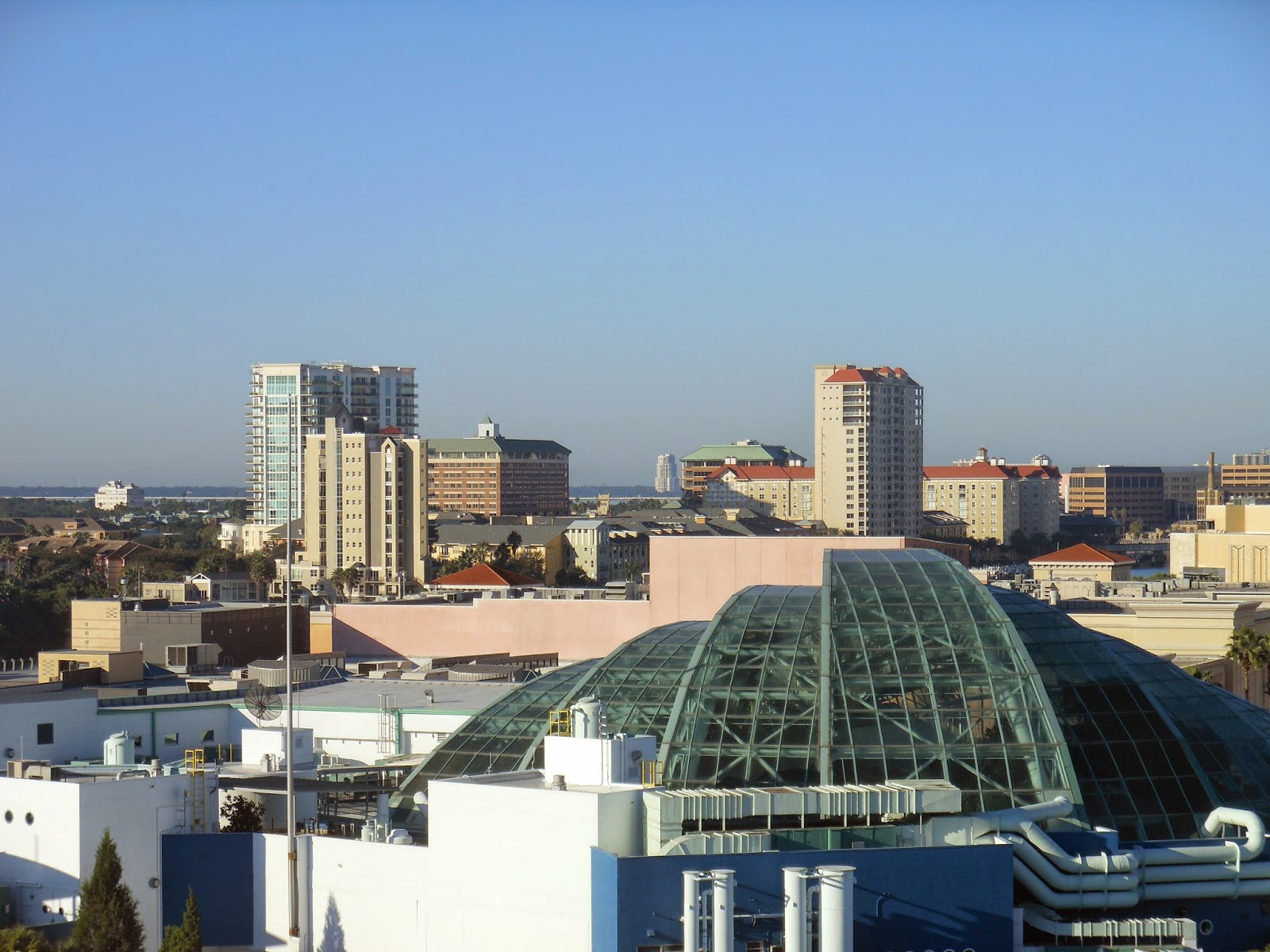 By noon we were back on the ship and eating lunch in the Garden Café.  Afterwards we started another game of Hand and Foot with Shari and I skunking the boys by over six thousand points!  We had 14,735 points to their 8,550.
Soon we were each doing our own thing; reading, crafts, napping, etc.  At 4:30 pm…they tossed off the ropes and we headed out to Tampa Bay with several new crew members and mostly new guests.  There is a handful of people who have been aboard with us since Los Angeles, but not many.  The new crowd is much younger, many more children and the gambling Casino is full all day long!  The decks are jammed with sun bathers and the hot tubs are full.  Definitely a different crowd. 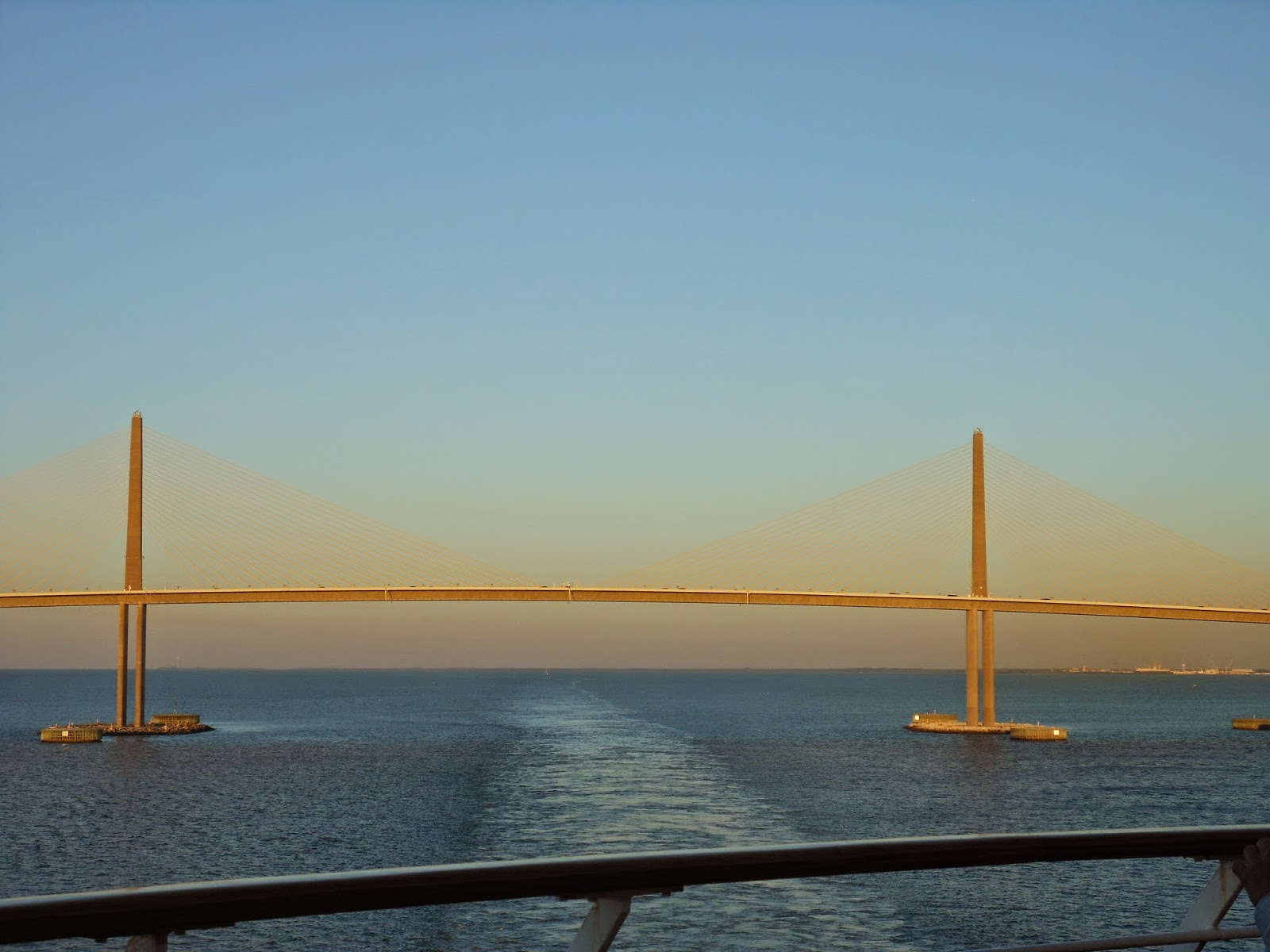 But we did enjoy sailing under the Sky Way Bridge that connects Tampa and St. Petersburg with Bradenton and points south about 6:30 pm.  It took two hours from the dock to finally reach the bridge and enter into the gulf from Tampa Bay.   No…we could not spot our friend’s home from the ship even though we knew about where it should be on the coastline.   We enjoyed an early dinner in the Garden Café and then attended the early show at seven o’clock.  It was a Variety Show with the dancers performing, introduction of various crew members and a short performance by the new comedian that will be performing Monday evening.
Monday morning we were up early as we’d set our clocks back an hour last night and got to sleep early because of it.  This is Day Two of the new cruise.
Both Jim and I are reading books all the time so we’re never at a loss for something to do.  The television in the room is rarely on which is nice.  I walked my two miles today but Jim passed.  The weather is cool and breezy but the sun is shining bright and the pools are full.  But then the Casino is also full.  Not sure but I’d say there are many more people on this seven day cruise than we had on the first portion of the trip.
We met for lunch at 11:30 am in the Garden Café and then had our daily dose of Hand and Foot.  Jim and I were partners today and although the score was close they definitely beat us each hand and took the game by three thousand points.  This afternoon, Shari and I are going to the free session at the Spa that they say will make us look ten years younger!    The boys wanted to go to the Hot Tubs but again…too full.
Dinner tonight will be at the Four Seasons; and then the early show where the comedian is performing for an hour.  This has been a good day at sea and tomorrow we land in Roatan, Honduras.   We’re planning to stay near the port.   One interesting observation is that we’re seeing repeat performances by some of the entertainers and also the music has changed.  We can no longer find any groups playing classical music; as I said…it’s a younger crowd.


Thanks again for signing in to hear about our continuing cruise in the Gulf.   Below is the slideshow:

Ive heard people say that the older you get, the less you understand. In your youth you have that confidence, sort of blind confidence which allows you to take chances and do things you might not do when youre older because you know better. See the link below for more info.


I simply want to say I am new to weblog and truly savored you’re website. More than likely I’m want to bookmark your blog . You actually have excellent writings. Thanks a bunch for sharing your web site.