Our last full day in Cusco and the last day that our Tourist Pass is good.  What shall we do?   We could hire a taxi to take us to one of several sites anywhere from two miles to fifty miles away from Cusco.  But that would involve taxi fare and then long walks and usually some climbing. 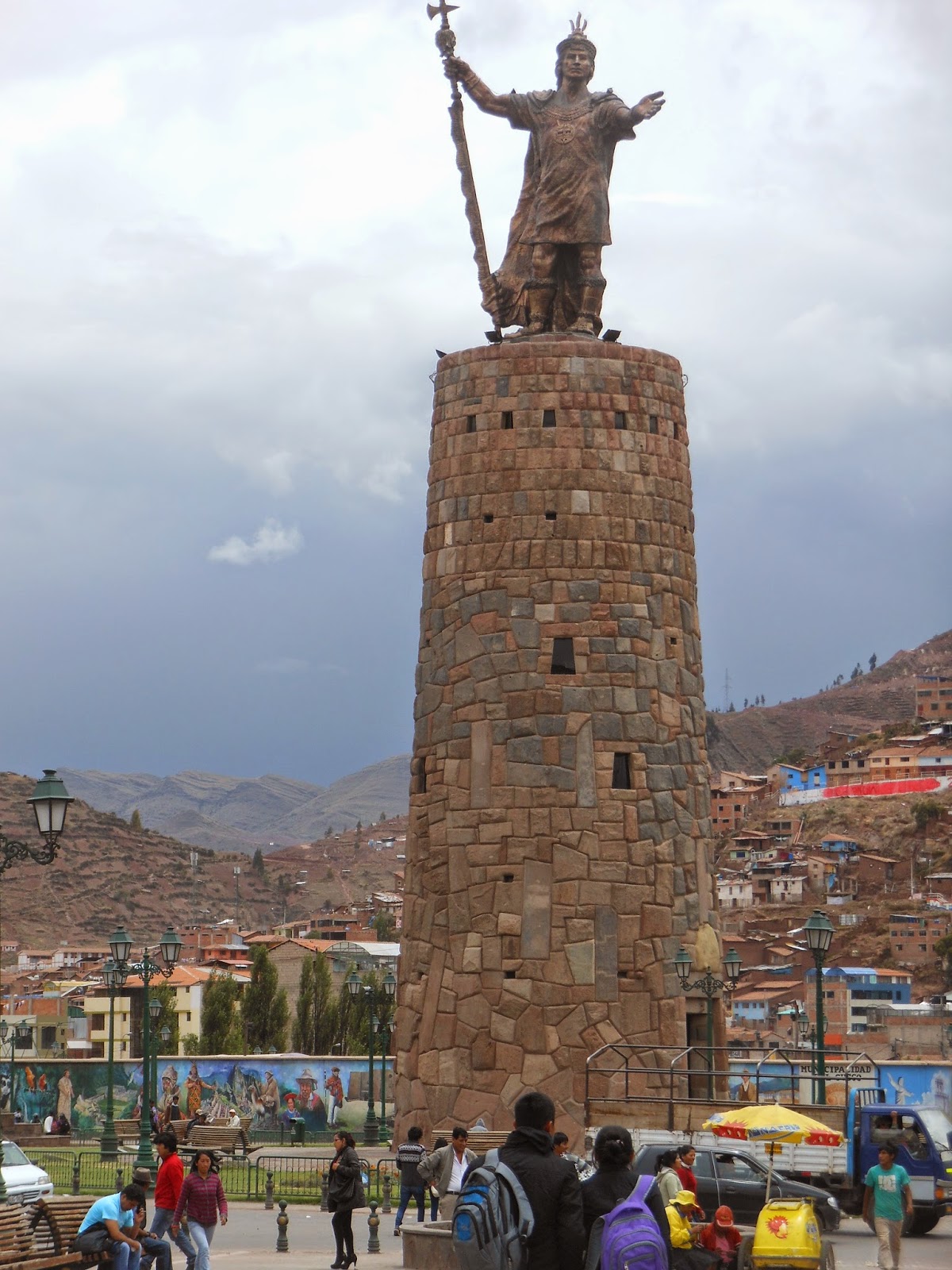 We decided to stay in town, prepare for possible rain…the dark clouds are numerous across the skies…and walk to the Monument to Pachakuteq to the west of our hotel.  I told Jim that if we could slowly walk, it’s downhill all the way, to the monument; on the walk back he could whistle for a taxi any time he had had enough.  The altitude has really gotten to him; we’re eleven thousand two hundred feet above sea level here in Cusco.   We’re both short of breath regularly and can hear the ticker beating after climbing some stairs.  It will be good to go back to California tomorrow.

About 11:30 am we left the hotel heading southwest down Avenida del Sol.   We walked for an hour before we arrived at the Monument.  Coming home we shed our jackets and put on sunglasses as the sun was shining brightly around those dark clouds.  After many stops we were about a third of the way back when Jim raised his hand for a taxi; it was about one thirty and we were back at the hotel within minutes. 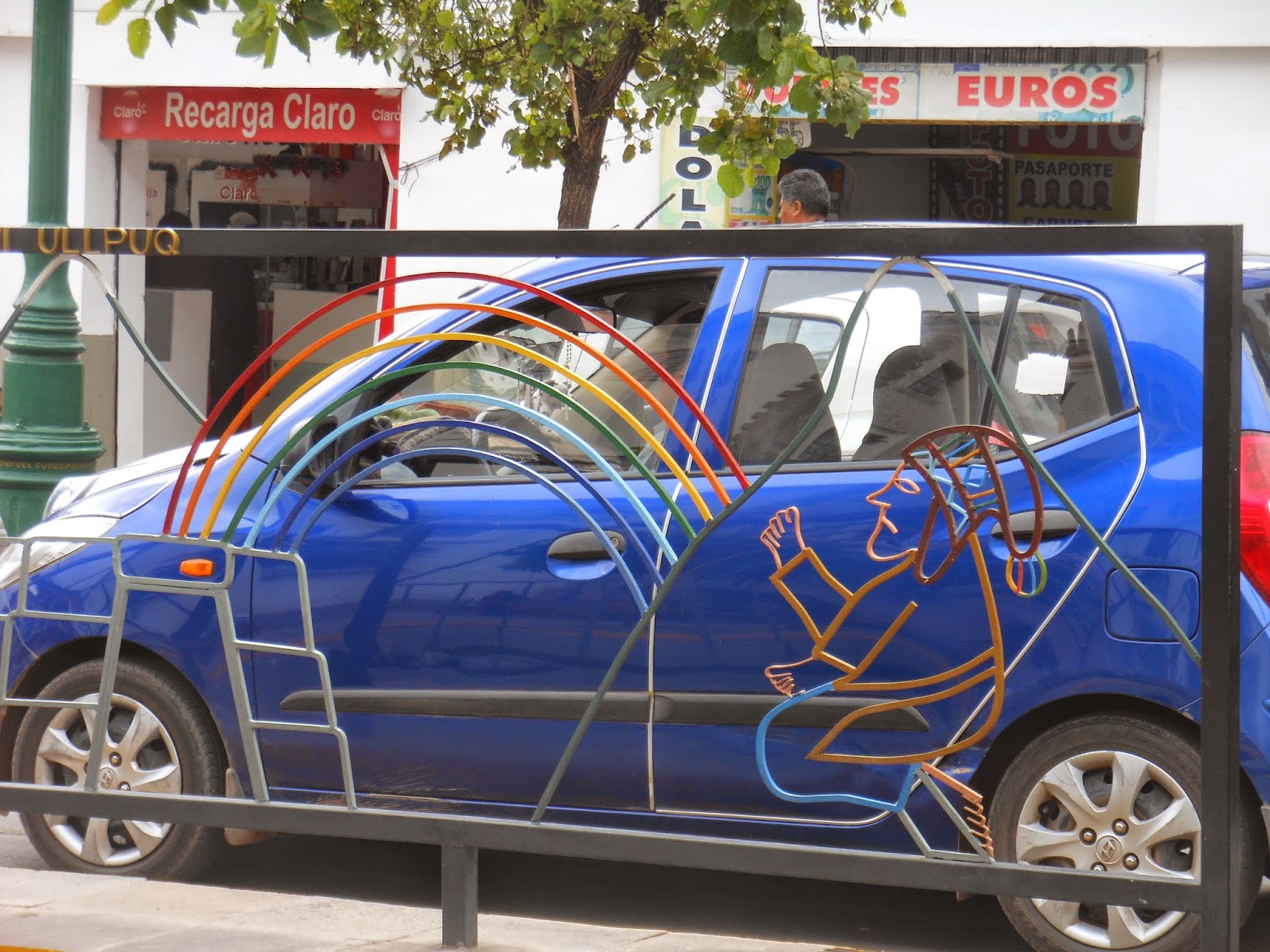 Along the way down Avenida del Sol I took many photos.  This is a broad street that has a divider in the center that has planters and beautiful iron artwork stretching for many blocks.  The art depicts Peruvian scenes.    One of the first large building is the Hall of Justice.  Many people were sitting outside waiting to go in; Jim said the men in the suits were the attorneys.
We stopped at a free Museum dedicated to the history of the beautiful weaving of Inca motifs in the materials of Peru and how they are made for different types of uses.  A large display had to do the clothing made for weddings.   Children spend their time with parents and grandparents and much of the skill of weaving is learned over the years as they grow up within the family.  But…no photos so you only have the front of the building and one of three people who were weaving inside. 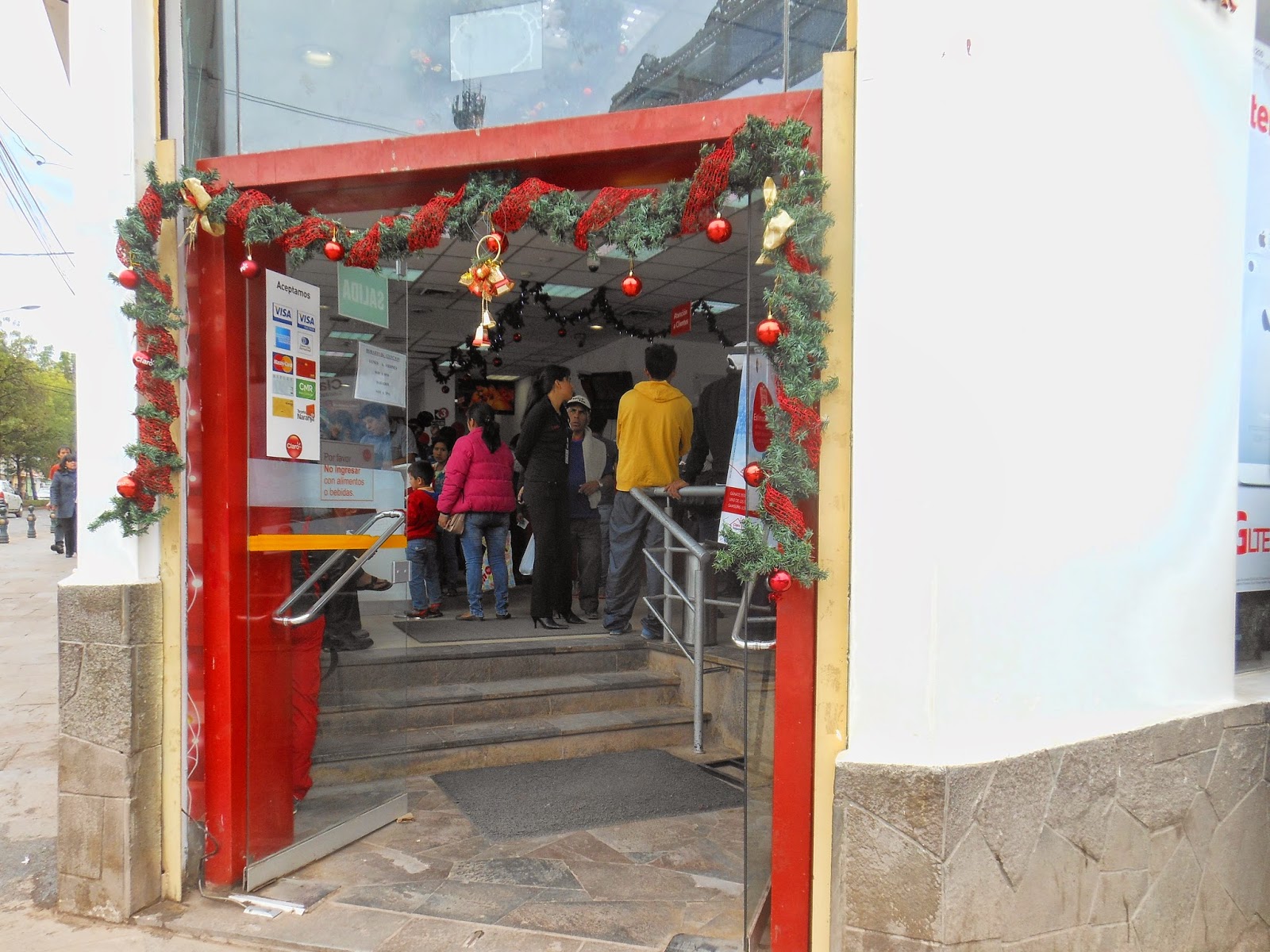 Many expensive hotels are located along this street and some beautiful restaurants.  There are also many stores, some fancy and more that are very basic.   Today is December 1st and there are a lot of Christmas decorations being hung … even here in our hotel.  They look much like the ones at home in the USA.

We visited a small plaza; then a much larger one with a waterfall that Jim was able to walk under.  That marked the area where we entered a much larger street called Alameda Pachakuteq which ends at the Monument built in 1992; our goal for today. 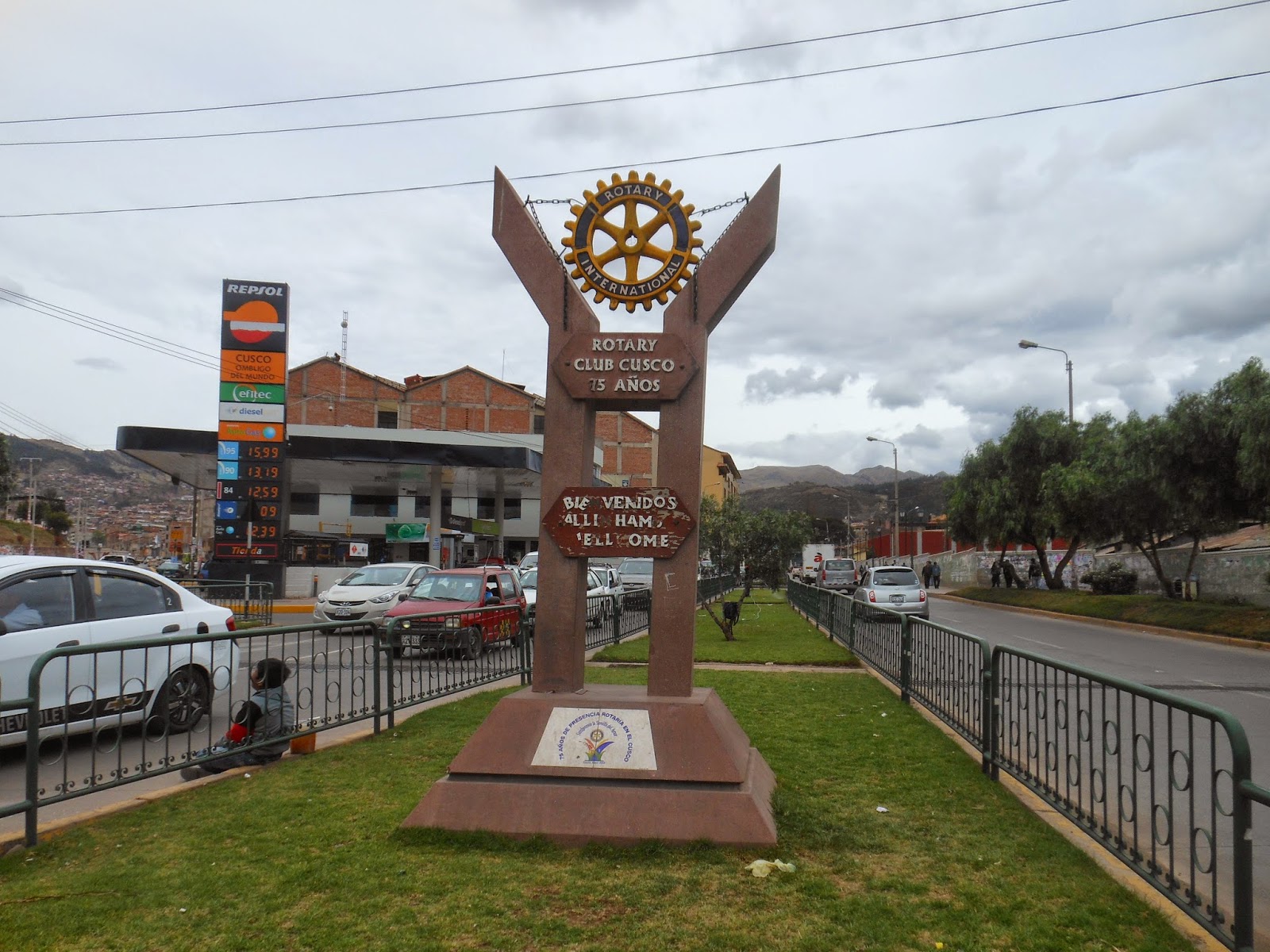 At the beginning of the street there was a beautiful Rotary Club sign; possibly they helped finance the building of this park in the center of the street.

The base of the monument is constructed of stone, which serves as the base for the thirty-eight feet tall bronze sculpture of Pachakuteq; it has nine levels and is seventy-five feet high.  Inside the monument are museological and museographic exhibits, which acquaint visitors through oral and visual media, with the history of this Inca, who was the greatest planner, visionary, city builder, reformer and administrator of his time.  From the top, you have a spectacular view of the city.    (this paragraph was copied from the brochure) 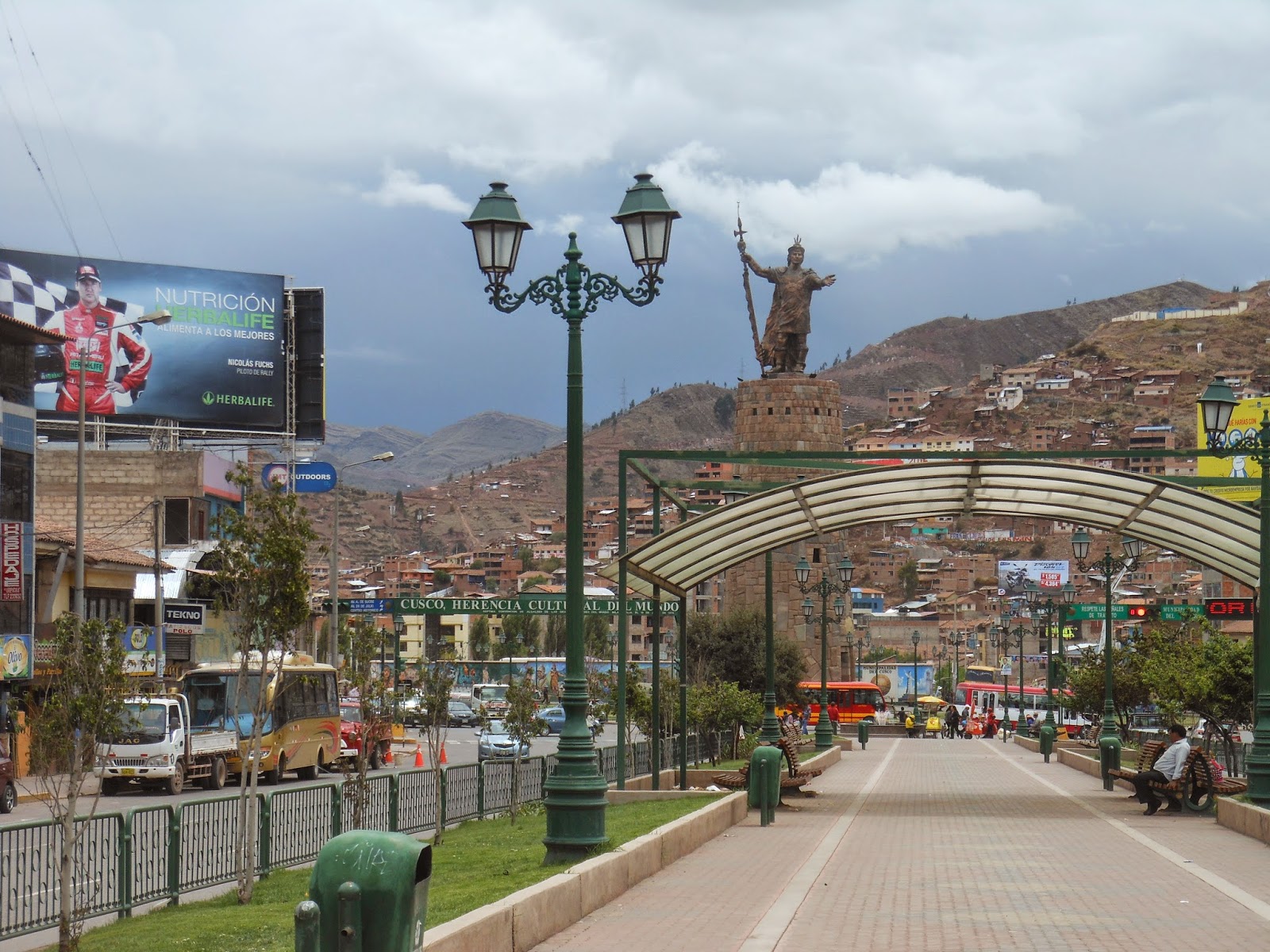 The large street has a beautiful park that stretches the entire length of the street.  Midway there is small amusement park for children on a side street.    There were covered area with park benches that we made good use of for resting.    At one point I saw a group of half a dozen dogs sleeping; as soon as we approached they started snarling and barking but kept their distance.  As I’ve said before; it is extremely unusual to see dogs on a lease and I rarely see cats.

I hope you enjoy the photos of our adventure on our last full day in Cusco.  We head home tomorrow evening.  Thank you for joining us on our journey.  Adios Amigos

Post Script:     We went out for dinner this evening and enjoyed a delicious bowl of soup at the Los Balcones Grill; just a few steps down from our hotel.  There we enjoyed taking some photos of the two cathedrals while we waited for our soup.  Jim had an Inka Kola; a cream soda.   Said he hadn’t had one of those in years.  I enjoyed a dessert drink that I was told I must have sometime while I am in Peru ….Pisco Sour….except I just had the Pisco straight….El Artesano was the brand.  Very good.  Jim took a few sips so he could say that he’d also tried the National Speciality for alcohol; similar to Vokda.
We walked the block after dinner and enjoyed looking in the store windows for the new Christmas decorations.  I’ve added a few more photos for you.
Always forget to mention something unusual about our hotel…the hot water pipes are in the wall at the head of my bed.   So, before we take a shower we always feel my wall to see if we need to go downstairs and have them turn on the propane gas for the hot water.  Fortunately, it will be hot within a very short time.  Now we will finish packing and I promise…no new blogs until I add the final one in California after I get home.