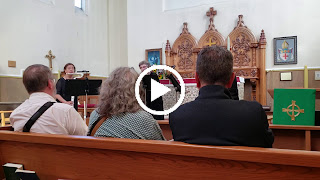 Awake early at 6 am gave me quiet time to write and post yesterday 's adventures in Victoria.   Today didn't start until noon.
We walked to the bus stop and after a short wait in the hot sun we boarded our bus for the short ride to St. Mary The Virgin's Church.  Oops... had not planned well and the bus whizzed by  our planned stop; before we realize it we were a mile down the road!
So glad we'd worn our tennis shoes as twice today we had to walk a distance because of errors in bus routes. The bonus for this mistake was the doe we saw within ten feet of us as we rounded a curve while we were walking.  She saw us and walked away, crossing the road as we held our breath for fear a car would come by; but luckily that didn't happen.
Good news we arrived two minutes before the classical  concert began in the small chapel with 50 seats that were filled.
The opening and closings were performed by a string trio, bookends for an outstanding trio of flutists with five different flutes, including a base flute, the first I've ever seen.  It was used to perform a Japanese piece of music.  So enjoyed the entire performance and chatting with fellow members of the audience during the intermission.
Back home on the bus for dinner and then a three block walk to St. Patrick's church for 6 pm mass.  The priest asked if there were visitors and we were the only ones.  The parishioners warmly welcomed us.  The gospel and sermon were about Mary and Martha.  After mass I told the priest my name was Martha and I had a twin named Mary. He laughed and said and I also have a twin named Mary.  Great experience and then we walked home to pack our bags for today's  trip to the northern tip of Vancouver Island to Swartz Bay.  There we will cross by ferry to Vancouver City and by taxi to the Port of Vancouver.
We will board the Noordam, a cruise ship with the Holland American Line, for a weeks cruise to Alaska.  Not sure how the wifi 's going to be but will post as often as possible.
Posted by Martha at 9:46 PM