ARRIVED IN MADRID ON TIME

The photo was taken by my daughter at 4 am at LAX.   I'm  now sitting in Madrid Puerta de Atocha train station waiting to board the train to Pamplona.

Yesterday was hectic due to bad weather in Philadelphia causing flight delays.  But my angels were all around me with good advice and although I had to run through the airport in Philadelphia. ... I caught my scheduled flight with five minutes to spare.  They had already changed my flight to 8 pm to Lisbon connecting from there to Madrid ... I would have missed my train by the time I arrived.  Thanks everyone for your prayers....I know they helped.
The flight was only about one third full and all the center seats were used as beds.  I should have grabbed one but took two on the side so I could get some photos.


The storm was headed east so we had some bumpy weather but after we cleared it they feed us a lovely dinner and I celebrated with two cups of wine!
Eight hours later we were in Madrid. 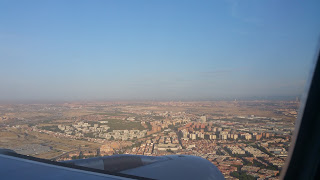