DAY ELEVEN ON THE CAMINO

Well, it's been a humbling experience today.  I slept really good with earplugs and didn't even hear all the others come to bed  (they were mostly spanish and they probably didn't even begin dinner until I was asleep)...then the cell phone alarms started going off at 5 am so I got up, packed and headed out.

It was 6:30 am and pitch black for about half an hour but I put on my headlamp and headed out with my  backpack.  Because so many were also getting up I knew there'd be a string of pilgrims passing me soon.


The sunrise was especially beautiful this morning, but the brisk winds kept it a very cool walk.  At the top of the first ridge there was an interesting collection of rock memorials with prayer sheets, photos and other personal items held down with rocks.  There was also a coffee truck near here as we crossed a highway in the area.  In fact, we actually did more highway walking then usual today.

Along the way I was passed by many camino friends from past days.  Some from Friday night and several Italians from the birthday party.  Many stopped to make sure I was okay.  I'm very recognizable with my gray hair and pigtails.  One kind gentleman said that I was an inspiration to many of the pilgrims.  But, they could tell I was struggling more than usual today.  If I tossed my sleeping bag and another five pounds I'd be fine... but I like suggling down in my bag early in the morning when it's cool.  And it's good to know that I have the supplies and creature comforts so decision made that unless it's a less than five mile day. .. the big backpack is going by Transport.  I'll drink one less beer and sleep in large dorms to pay for the cost...well worth it...7 euros...tomorrow it goes down to 6 euros and after Burgos...5 euro and by the time I meet Jim in Sarria it will only be 3 euros per day. 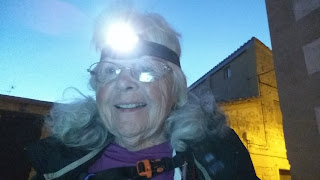 I was lucky as the owner came out with her son in the first 10 minutes.  Using sign language...she let me put my stuff inside and told me to come back at noon.

I spent the next two hours exploring the old city center.....up the hill...which was a snap without my gear.  Beautiful church that I will go back to this evening after dinner in a bar that offers a pilgrims 10 euro dinner as they have a 7:30 pm mass.

I was very fortunate as this is a lovely new albergue and several English speaking guests...including two recent college graduates from Florida.  We have a dorm room with eight bunk beds ...16 people....for only 8 euros a bed.  There are also several private rooms.  But no dinner.  They do have a Continental bkf for 3 euros but I find I walk better on an empty stomach.

To transport you have to have  a reservation so they know where to deliver your bag.  The albergue is very helpful setting up the next night and arranging the transport.  Also the municipal albergues do not take reservations so I'm using the private ones which are generally cleaner and the same  price.

Viana is an active town with 4000 residents.   The Camino passes through the historical center which is much the same as it was when medieval pilgrims were walking through.  Cesare Borgia was linked to this town during the reign of Pope Alexander VI...he was his iligimate son.   This was the 15th century.

There is the newer church and then the ruins of another named for st. Peter.

I'm really glad you are going to let your big backpack be transported by truck. That will make a huge difference! Chin up...Logranos beckons!!