Yesterday was a day best forgotten as the altitude was playing games with me and Jim was a good sport and let me sleep most of the day.  By late afternoon I was feeling like a human and we enjoyed an early dinner at KFC on the Plaza and walked around the square and used the ATM before tucking in for the night. 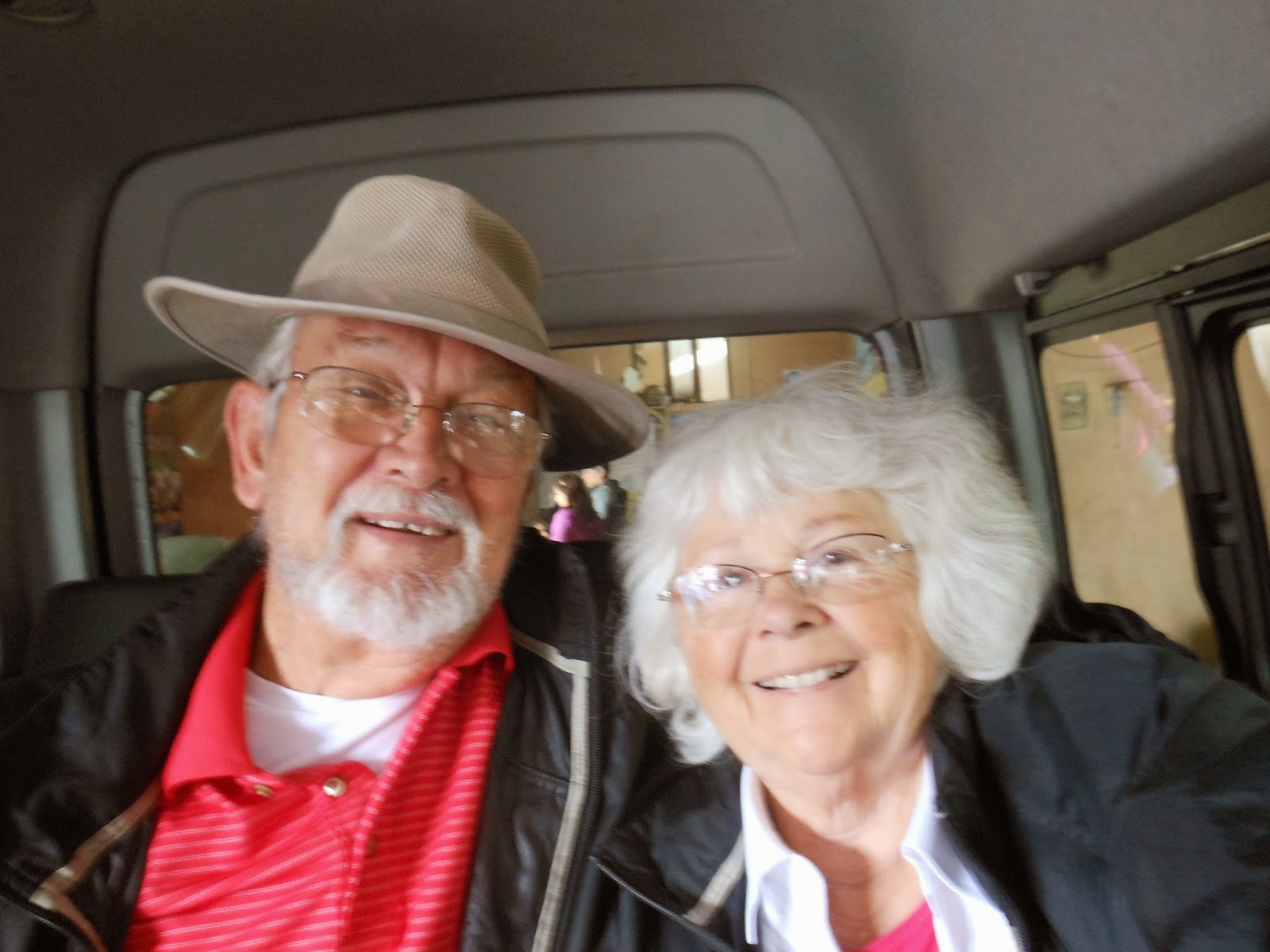 Woke up bright eyed and bushy tailed and ready for an adventure this morning.  After breakfast we had the hotel call us a taxi that took us to the bus depot.  There we boarded a fourteen passenger van and waited a short time until the van was full before taking off on our hair raising (at times) ride up and down the mountains on a two lane road.  There was a speed bump before we entered each town; otherwise it was who had the loudest horn and the most guts as we careened around the bends.  You’ll notice in the photos a darling old man who sat next to Jim for the entire trip with a live cocoa plant on his lap. 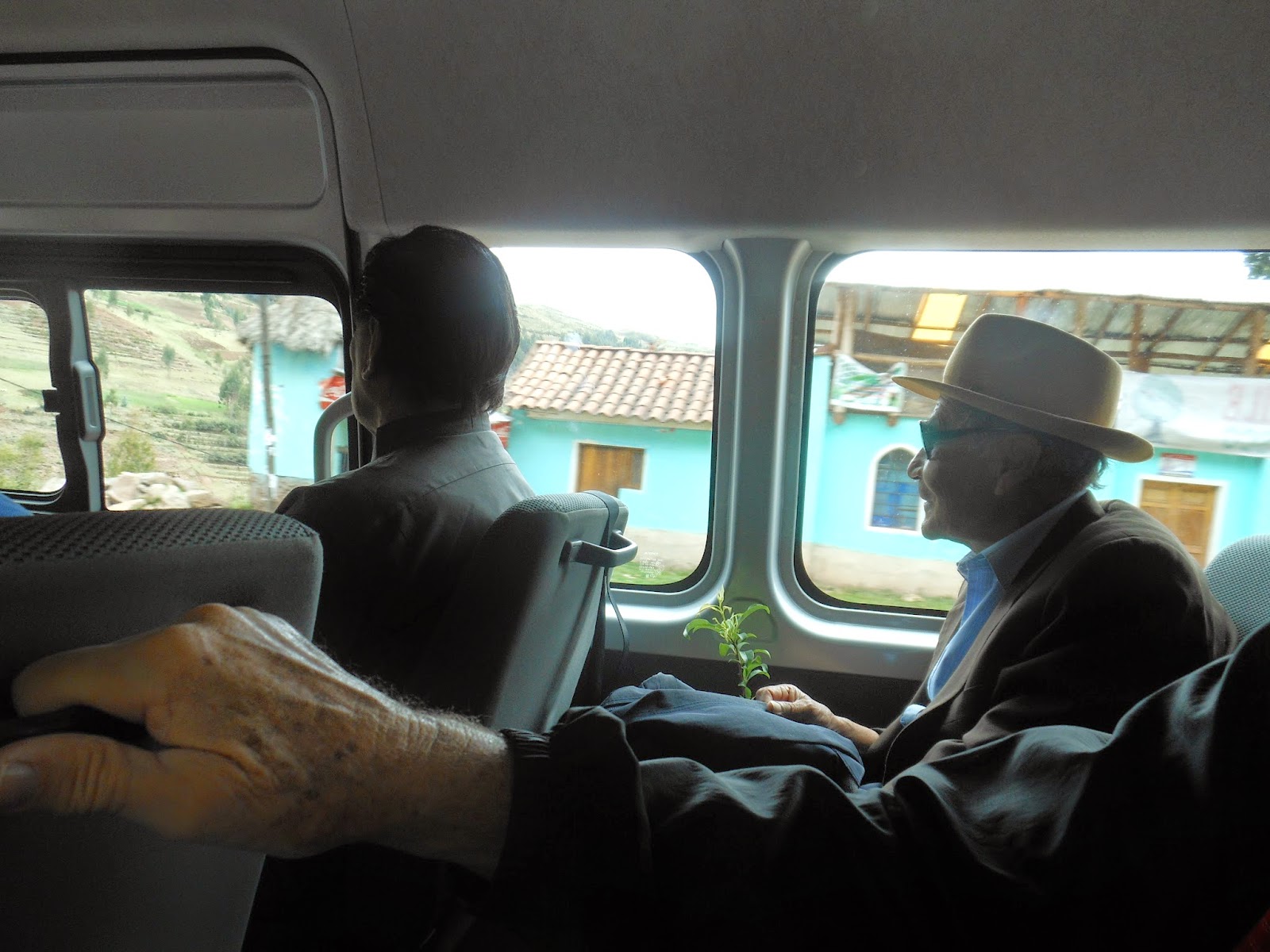 Along the way we saw crops of corn and many gardens.   Many of the homes hung on the hillside and their gardens were terraced up the hill behind their homes.  In the distance we could see snow covered mountains in some areas.  It was a beautiful sunny day and we didn’t need the jackets and umbrellas that we’d brought with us.   When we stopped for gas for the van a girl came up and sold bags of nuts to many of our passengers.  One time we stopped suddenly and started backing up quickly.   He put many bags on the car carrier on top and two large packages of rolls of toilet paper had come out of the box.  No problem, we were soon on our way again.
Animals roam freely everywhere.  Dogs have no collars and run in packs at sometimes or just meander on their own.   It is not unusual to see cows and goats along the roadside, sometimes tethered on a short rope and at other times roaming freely.
When we arrived in Olantaytambo we checked out the train station and then decided to go see the ruins that are in the village.  Just about that time I got a major nosebleed and only had one pack of tissues with me.  It cost of a dollar to get two more packs from the street vendor; but I was glad she was there.  And, she knew immediately what I needed. 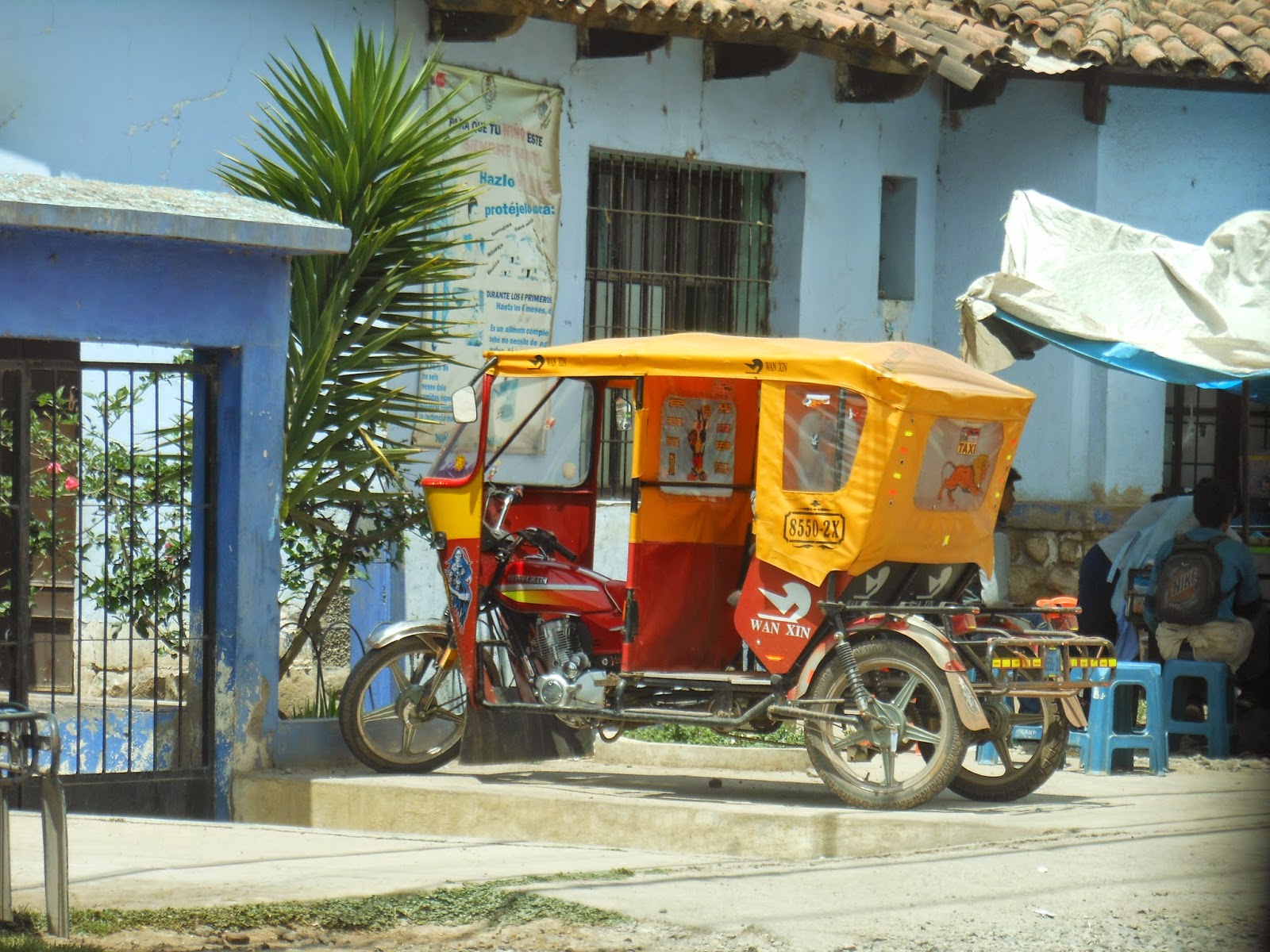 So we stuffed tissue under my top lip and inside my nose as we started asking for information on where the ruins were located but all we got were offers to take us in a taxi.   Jim was sure it was walking distance…and it was but uphill.  We paid the taxi and he took us the short distance…we really got taken on the fee but it was worth it.    After half a mile we were there!

This village is described as a living Inca town.  They attempt to maintain Inca traditions including ploughing their fields by hand with a foot plough and oxen.  I actually saw one but the van was moving too fast for a photo.  People have lived here on these cobblestone street since the 13th century.   The ruins are located at the top of the village and are a series of carved stone terraces built to protect the valley from invaders; leading up to the fortress, Araqama Ayllu. 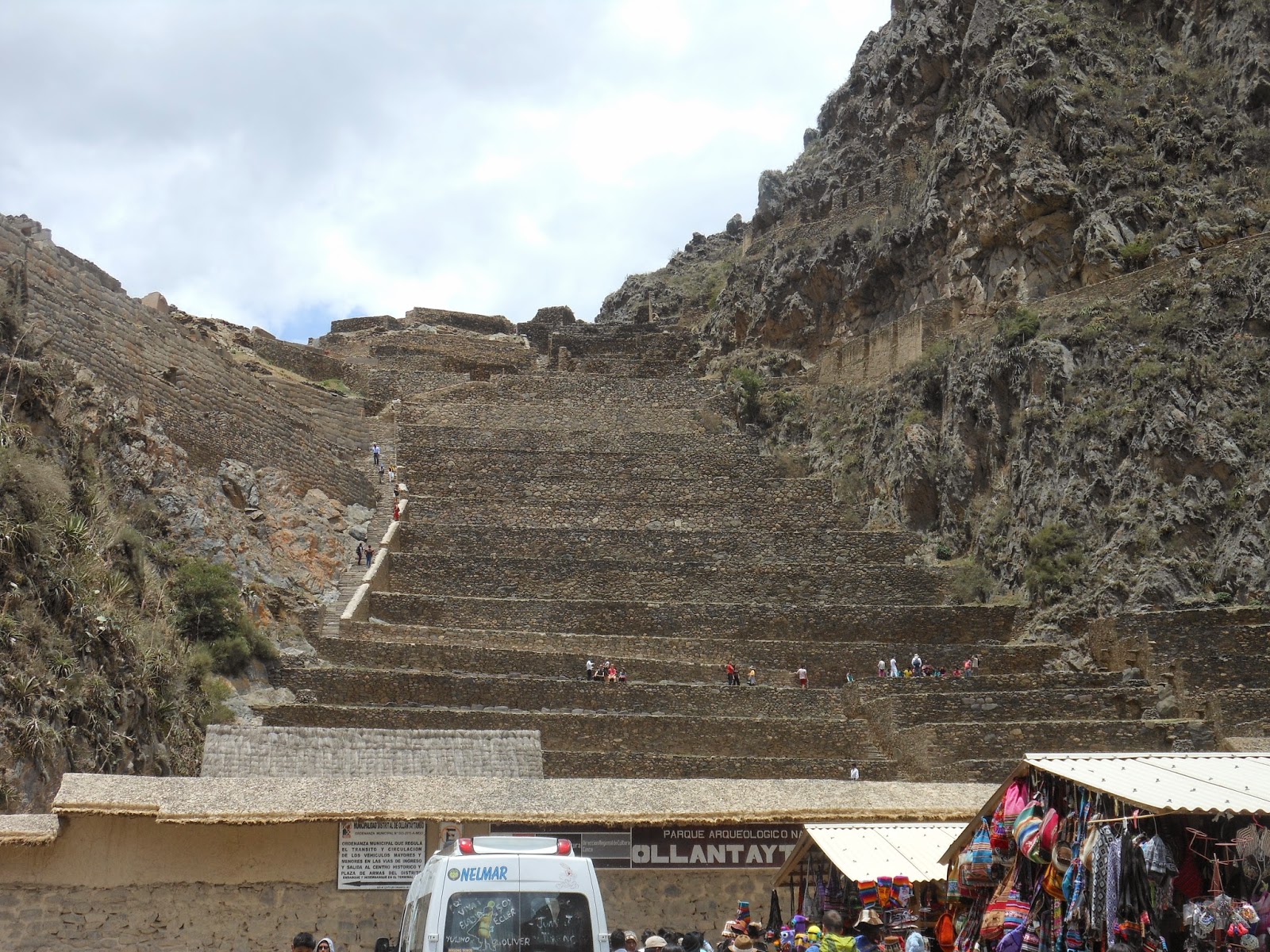 We had to make a tough decision.  First we could see most of it from the outside; secondly the cost was rather steep because you were actually purchasing a ticket for entries into four different sites, this being one.  They would not sell us a single entry ticket.  Also, there were some steep steps to climb and Jim decided to save that for our main adventure in Machu Picchu next week.

So we turned around and easily walked back to the bus stop where we got back on a van for the trip home.  We waited nearly half an hour but he only had the van half full.  While we were waiting a man and a woman got out of a taxi with one suitcase.  He was in a business suit with a tie; she must have picked him up at the office for the start of their weekend adventure!  People watching can be fun even in a foreign country.  Jim is sure that they headed for the Belmond Sanctuary Lodge at Machu Picchu.  We looked up the going rate this evening; out of season it is $1,333.00 a night.  Soon we were on the road and at each village the driver called out “Cusco” and by the time we arrived it was with a full van.
The weather held for us as we had only a few sprinkles at the ruins and a few more after dinner; but the weatherman is not being so kind about the prediction for the weekend. 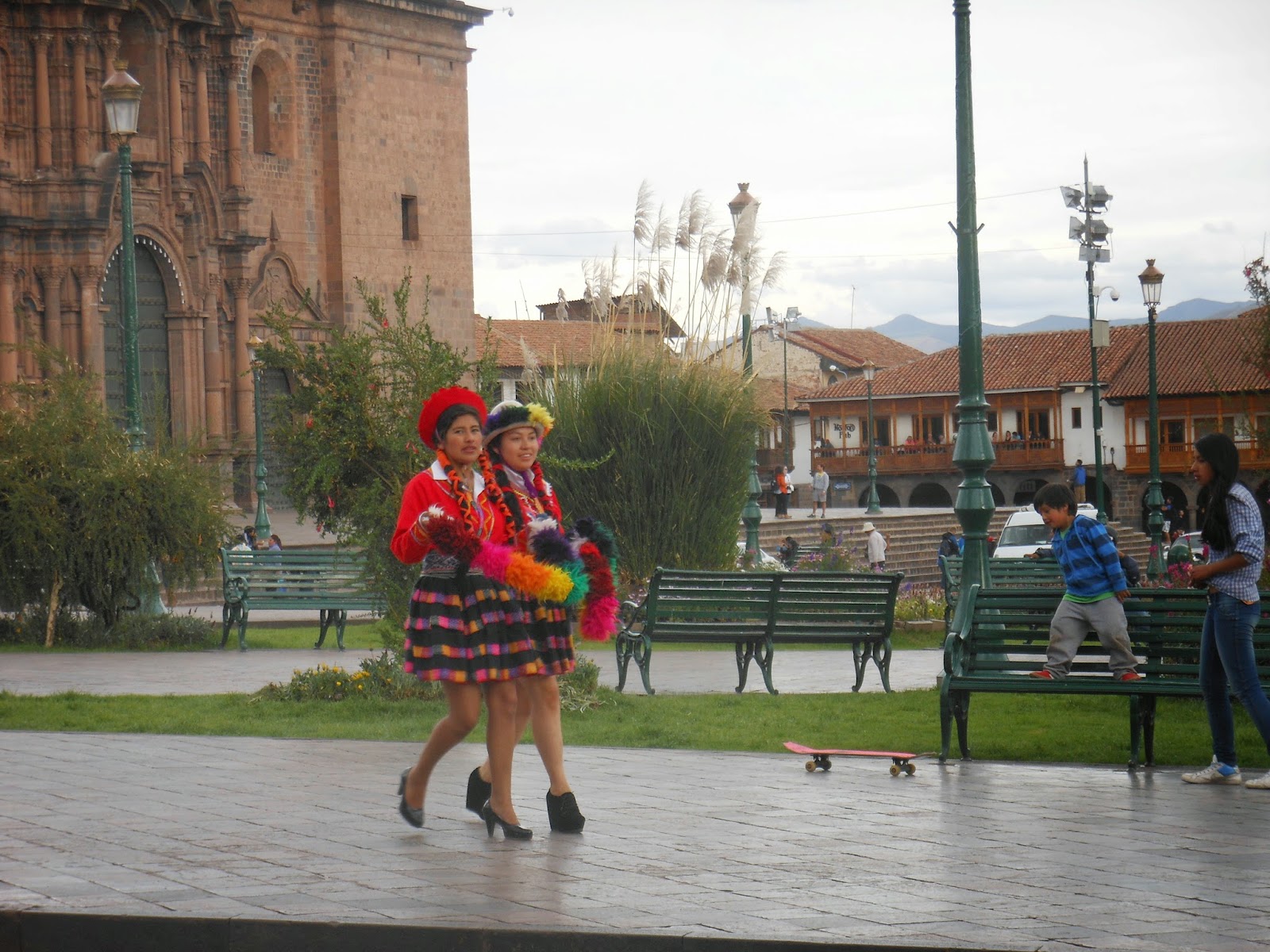 Our dinner this evening was at the restaurant called Las Estancia Andina Resturant & Grill.  It is located in the same building as our hotel and we share the same entrance.   The décor was lovely with views of the plaza and offering a wide variety of food.    The table linens were a big plus for me.  I enjoyed tomatoes stuffed with vegetables and cheese.  Jim had a pasta dish with ham and cheese.   No room left for dessert by the time we finished.

Outside we watched the town starting to come to life for Friday night.  We walked around the plaza before tucking in for the night to read, write blogs, and review photos…I have nearly three hundred and pared it down to only one hundred for your enjoyment.   I hope that you enjoy the slideshow below.
Posted by Martha at 5:06 PM