It’s been a busy three days since I last sat down at my computer to journal the story of our adventure on the high seas.   Today is Saturday and we’re on the open water heading for Tampa, Florida where we will be departing the ship after twenty two days of cruising. 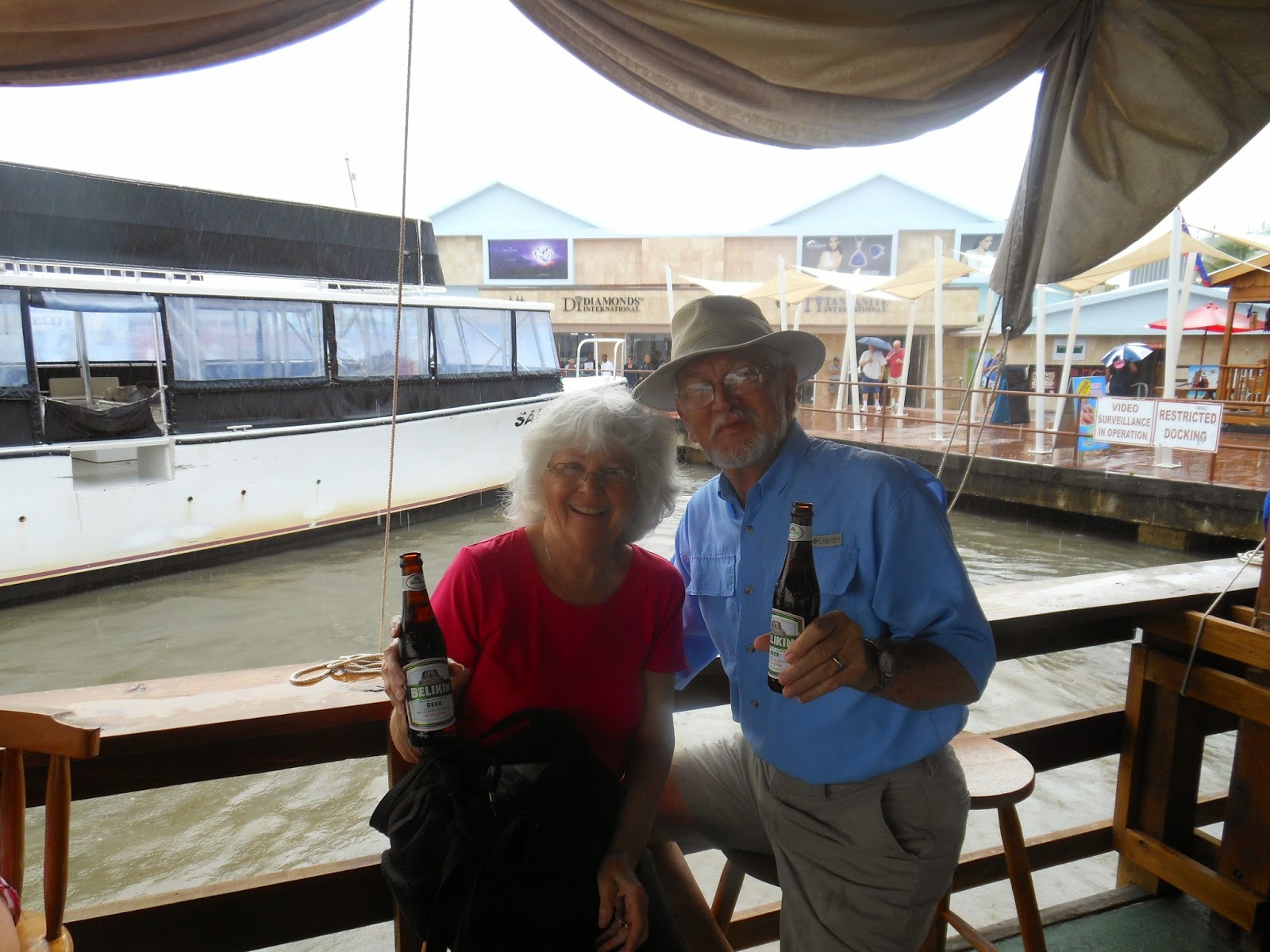 On Wednesday we were sitting off Belize when I last chatted with you; promising details if they were exciting.   Well….the trip by tender to Belize was very wet and after walking through the shops we had a bit of an adventure with local beers in an open air tavern before climbing back on the tender for the half hour trip back to the ship.  We were absolutely soaking wet by the time we arrived!   Lots of fun as we hid behind our umbrellas that we used to buffer the wind and rain as it swept across the seats of the boat.
Thursday was a day at sea as we continued towards the southern tip of Mexico.  They completed laying new carpet in our hallway…we now follow the little fishes to our room; about every three feet there is a red one that stands out on the very blue carpet especially because, as Jim noticed, he is swimming the opposite direction from all the other little fishes! 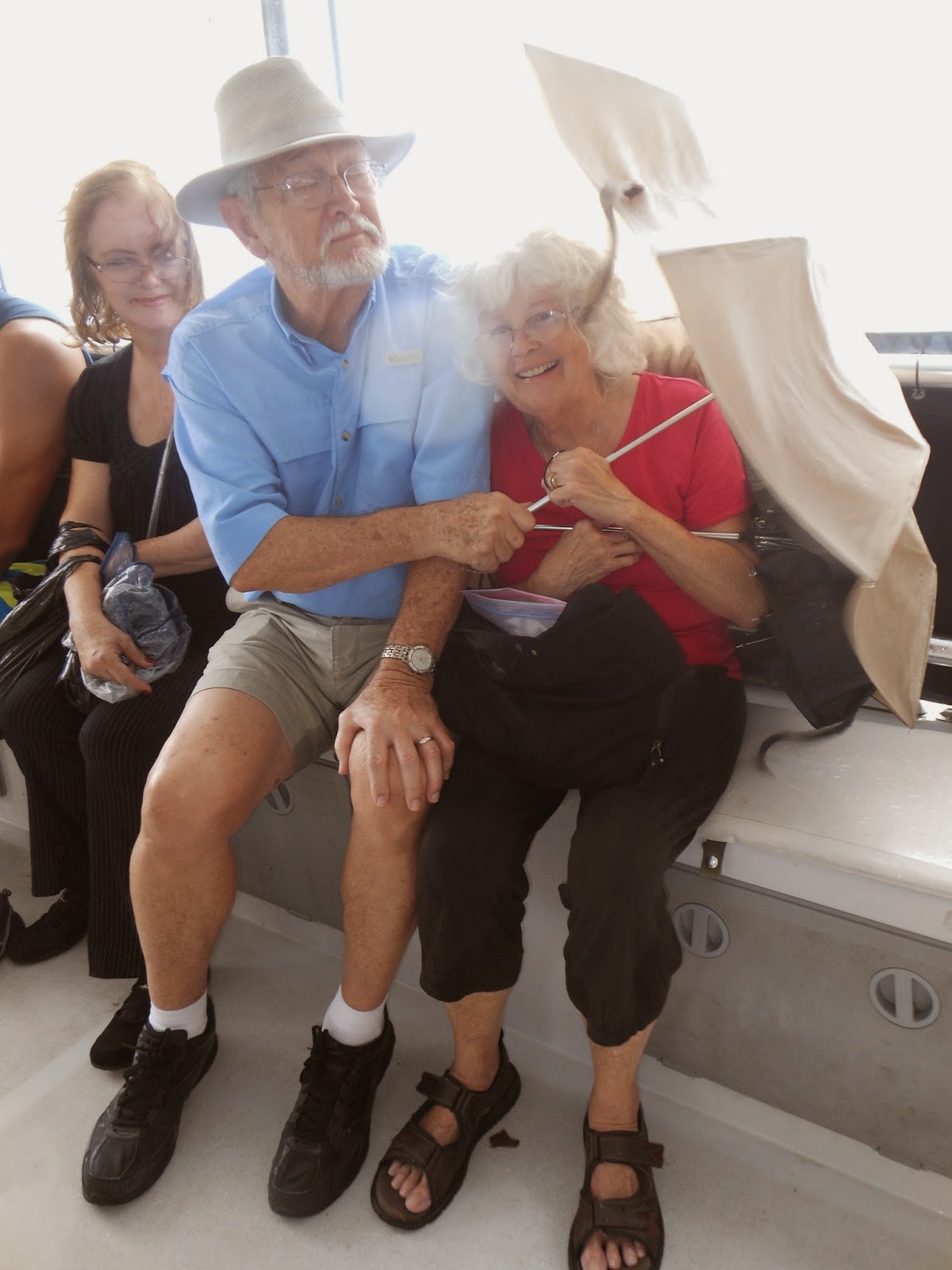 We also watched our ship’s captain, Captain Ronny Borg, spend time working with his crew on installing new film on one of the windows in the area of the Atrium where we enjoy reading.  A very personable fellow who apparently is not afraid to get his hands dirty and is well respected by the crew.
After lunch we boarded the trolley from the ship to the port of Costa Maya.  Walked through the shops and enjoyed watching the pools that had dolphins that you could pay to swim with.  One of the most amazing features of today’s stop was the color of the water, a very clear topaz blue.  The sun was shining and it shimmered as we watched several of the guests snorkeling in the water.
The afternoon was spent playing Hand and Foot with Dave and I as partners; we won but barely, the score was 13,955 to 13,085.   After dinner in the Four Seasons we enjoyed an hour at the theater watching the new juggler/comedian called “Sideshow Bert”.   One of the best parts of the show was the volunteer woman guest who very cleverly stole the show with her reactions to Bert’s instructions! 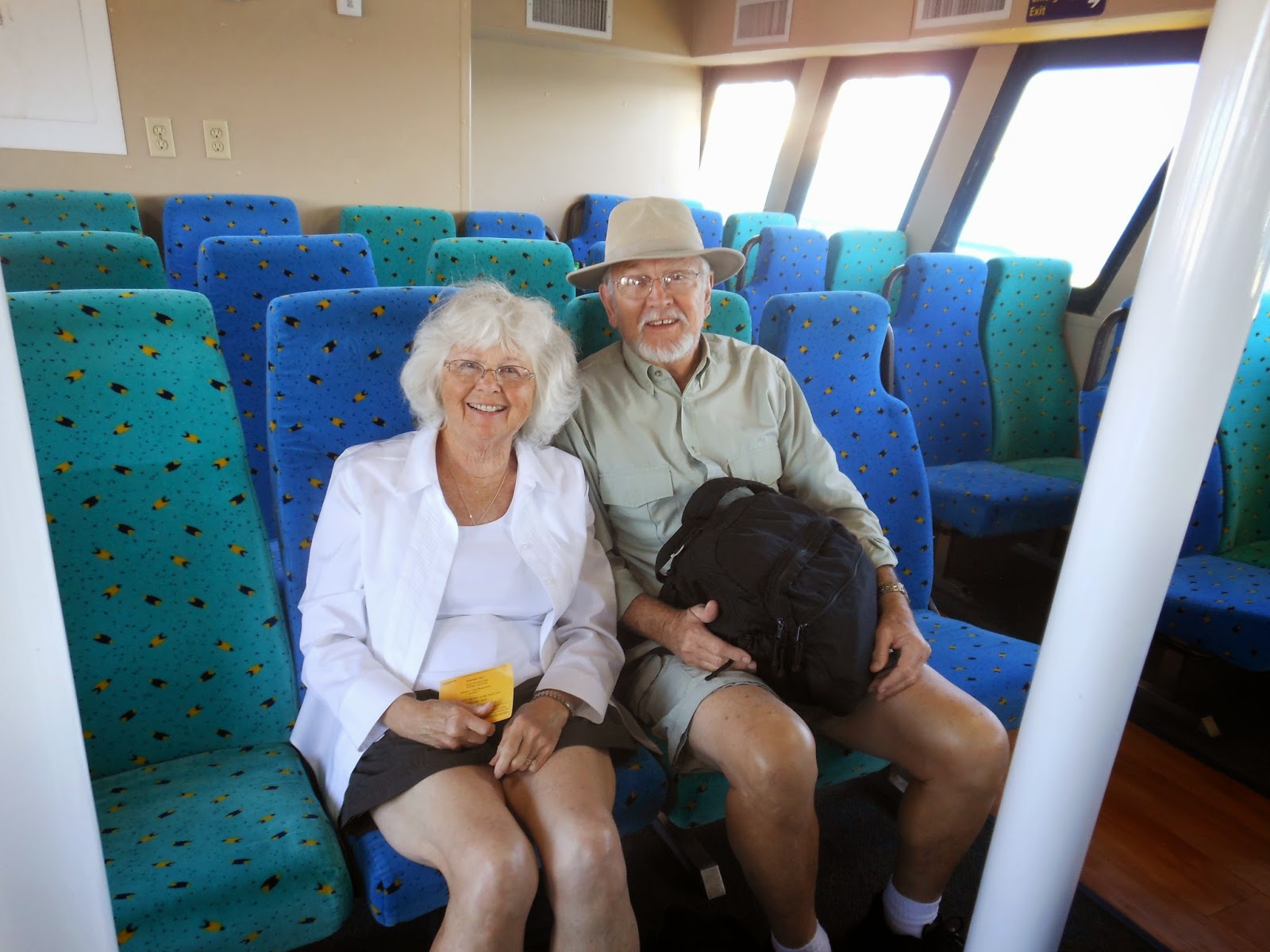 Friday arrived and we gathered our gear for our second major adventure of the trip:  The Tulum Mayan Ruins Trip.   We had to take everything with us that we thought we might need in the next seven hours.   We were actually docked at the Island of Cozumel.  We walked to the Ferry Boat that took us across the water to the mainland.   About forty-five minutes later we were in the town of Playa del Carmen, a tourist resort that caters to the cruise ships.   We met our tour director Pamela there and walked about a mile through the village to the air conditioned bus.   Pamela gave us the history of the Mayan people during the ride out to the ruins.  She is of Mayan descent and speaks both her native language, Spanish, English and a bit of several other languages that are necessary to keep her employed as a guide. 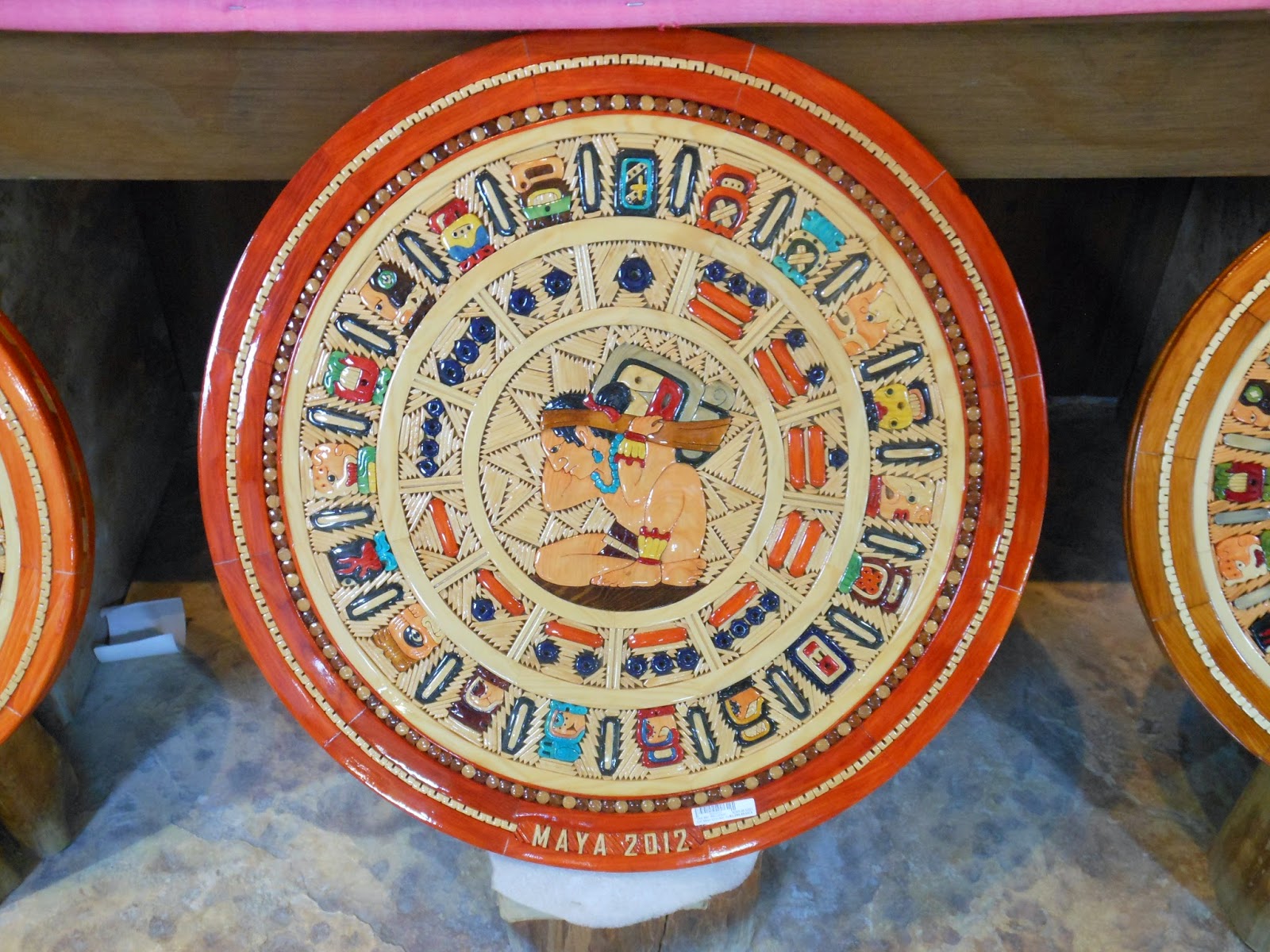 We had one stop at a very lovely store where you could purchase some beautiful, but very expensive souvenirs to take home with you.   The beautiful Mayan Calendars were tempting but the thought of where you’d display one made our decision to take home photos of it instead.
Soon we were at the Ruins.  We had another walk of about a mile to the actual site of the ancient Mayan Village that overlooks the beautiful coast far below.  We’d come prepared to swim in the crystal clear water today but when we looked at the time and viewed the very long staircase down to the edge of the water; we decided to forgo that part of the adventure.  We were disappointed to learn that people are no long allowed to climb the steps up to the top of the Temple; again it was a mixed blessing as the steps were steep and very old which could have been dangerous climbing for each of us at our ages. 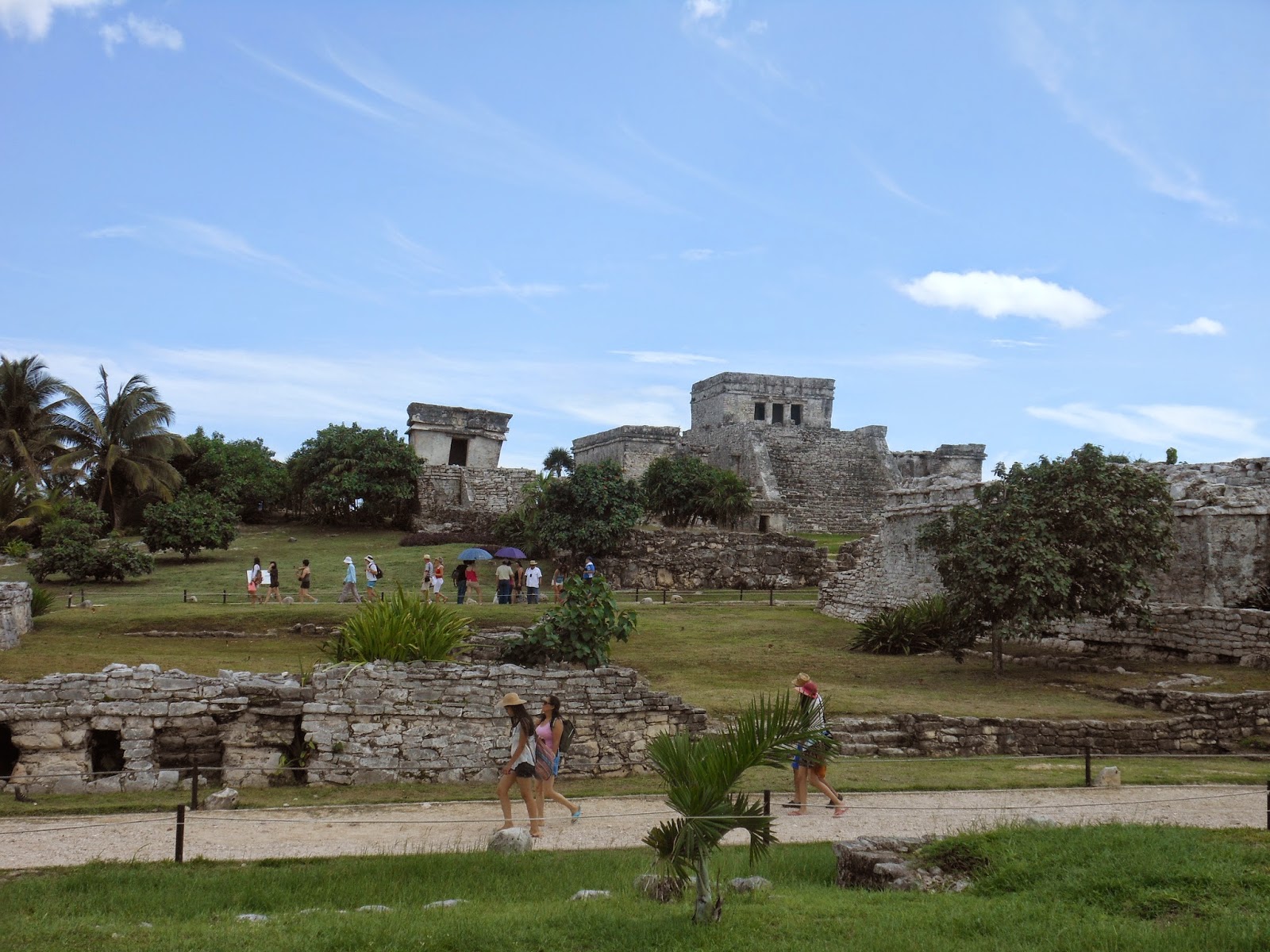 So….another mile walk back to the bus area where we enjoyed a lunch of fish tacos and margaritas.   They were very strong double shots and we had two so felt great on the way home.  We also enjoyed the extra spicy salsa on the tacos at Frosty Restaurant.
The trip home was quiet as Pamela knew that we needed some down time.   We’d all walked about three miles and since I’d awaken at 4:30 am and walked for an hour before breakfast….I was really ready for a nap!   Back to town where we stumbled along the road back to the ferry boat and another forty-five minute ride out to the ship. 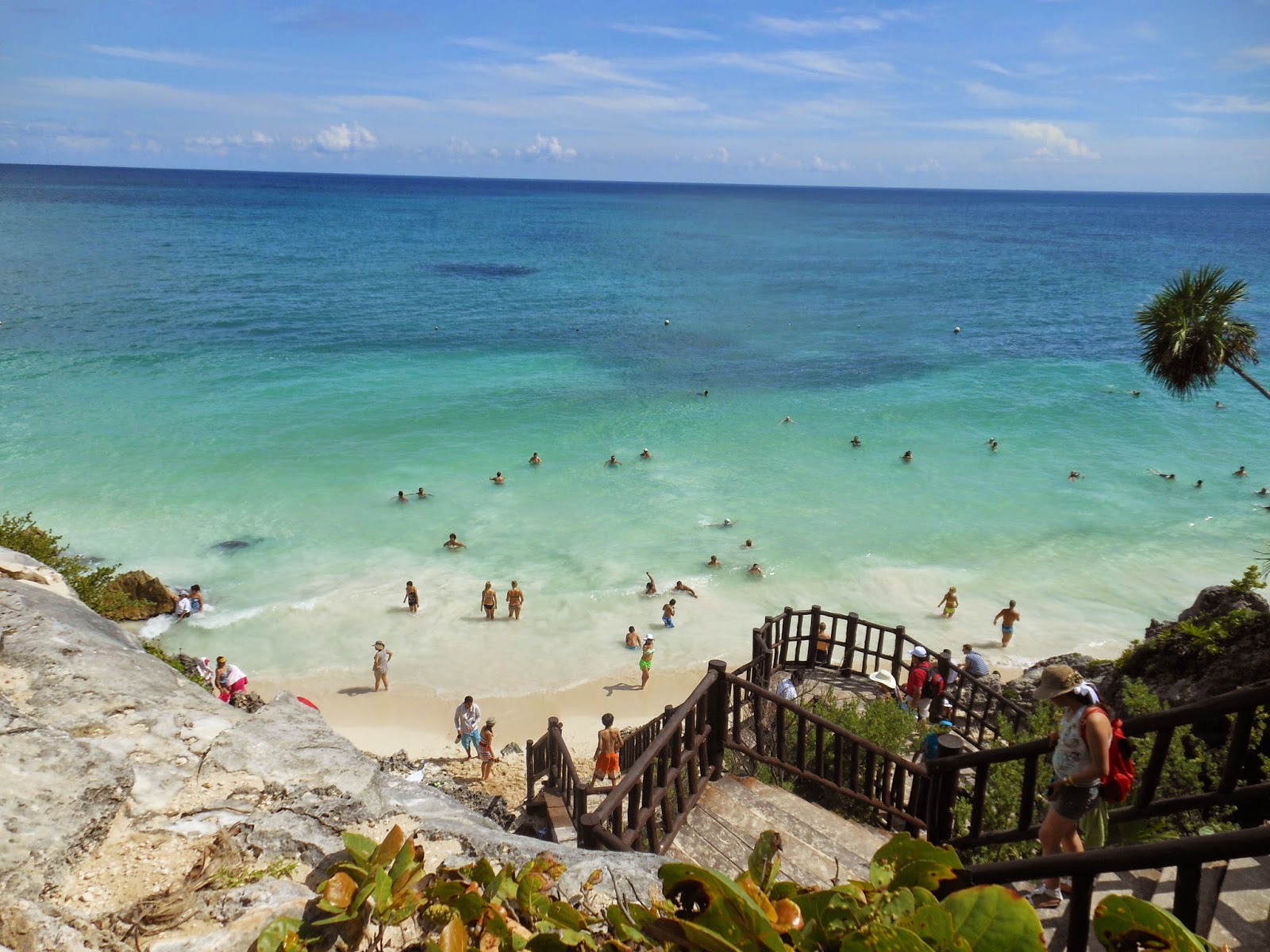 Hard to believe it but we did make it to dinner before crashing for the night.  The ship was decked out for Halloween and people were having a ball.  The main party didn’t start until ten o’clock and we were tucked in for the night long before it began.  Shari had brought us each a Mickey Mouse shirt from home and she’d cleverly created ears for each of us from materials here on the ship.  We may put them on today and take a photo just for the memories.    The Garden Café still had the pumpkins out this morning and I took a few photos.
It’s a day to relax and catch our breath before entering the real world tomorrow in Tampa, Florida.  We’ll enjoy the next two weeks with our family and friends who live in that area.    It will be great having access to the Internet on a regular basis.


Check back in around November 17th when we’ll be catching the plane for the last part of our adventure; we’ll be heading for Peru for a couple of weeks before arriving home in December.  Thanks again for taking time to enjoy our adventures on the high sea!   Below is the slideshow: