The Trip to Machu Picchu 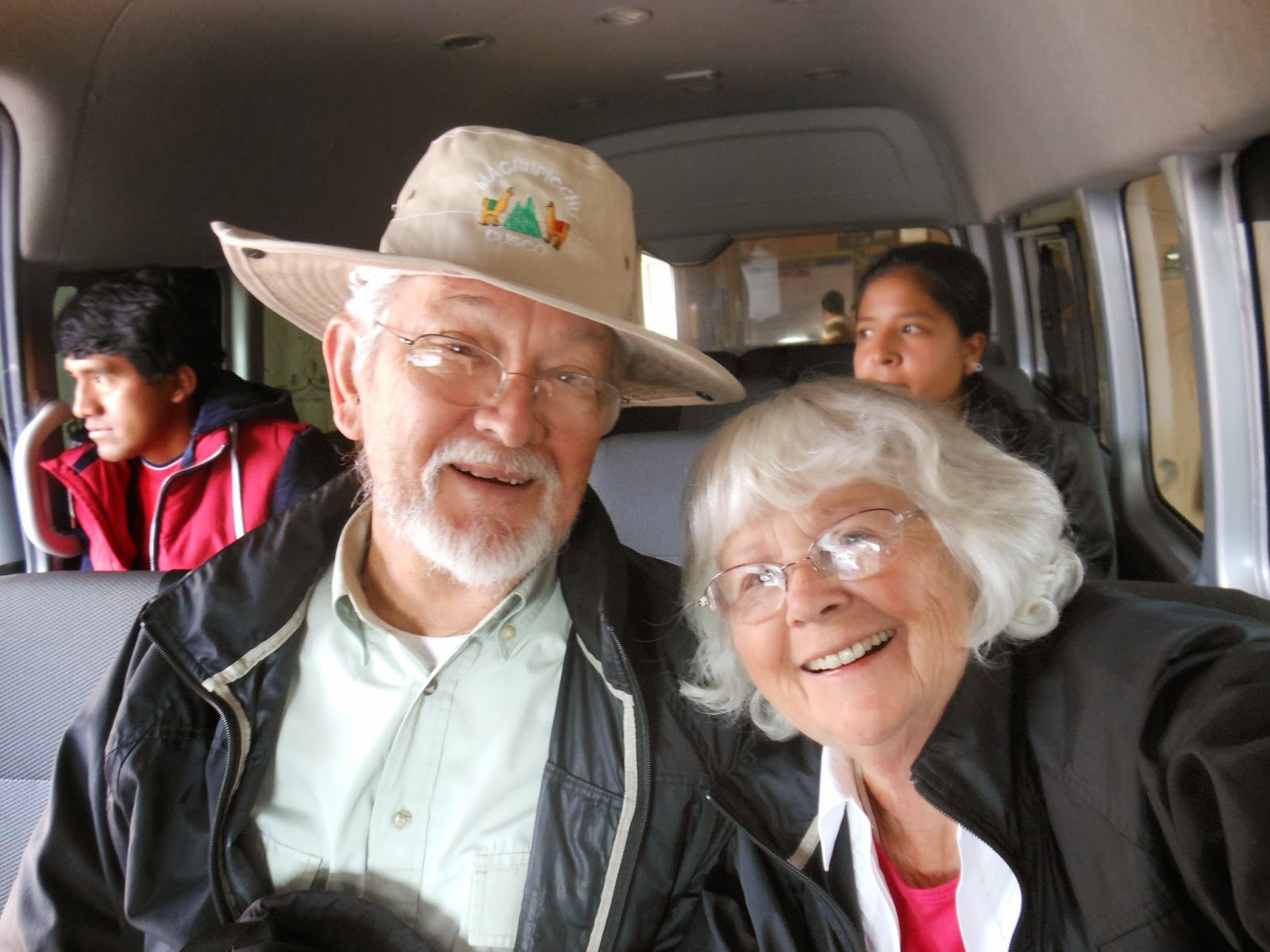 Today began at six am when the alarm clock went off!   We had breakfast at 6:30 and were in the taxi to the bus station by 7 am.  We arrived by 7:15 and there was only room for one more person in the bus that they were currently filling.  So we stepped aside and got into the next bus.  Good news is choice seats right behind the driver, bad news was that it took half an hour to fill all fourteen seats.  We ended with thirteen passengers, a large box occupied one seat and a couple held a cute little baby girl.  We were the only non-Peruvians in the bus, but the mother of the little girl spoke English. 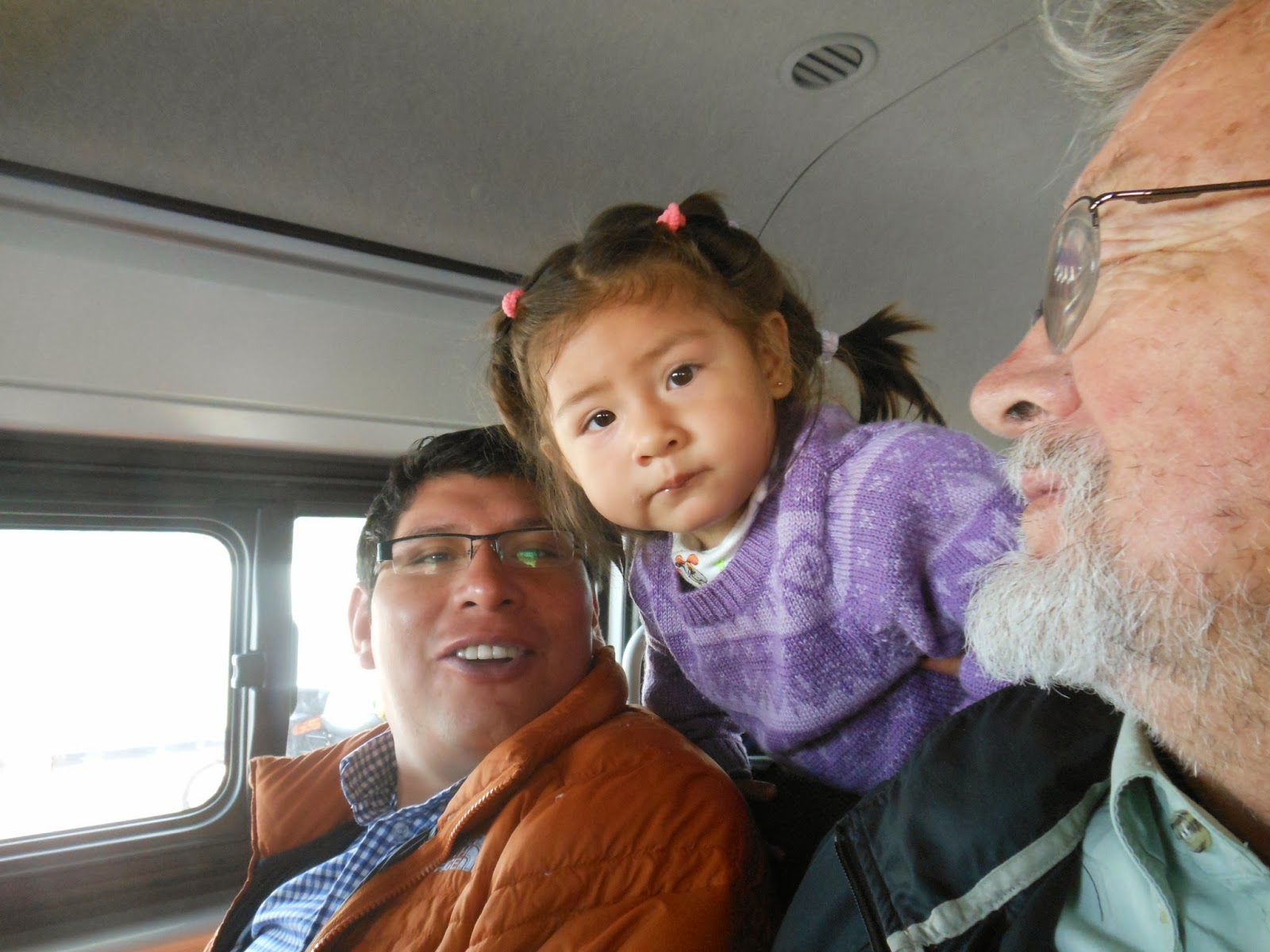 We had the same bus driver that we had last week on the return trip and he didn’t waste a minute.  However, he was sure to slow down for speed bumps, you’ll find one in the slideshow!    The little girl was a doll as the parents took turns holding her; but even the cartoon on the cell phone didn’t keep her quiet after the first hour.  We notice that there are now many more freshly tilled fields ready for planting and young crops already coming up in many of the fields.  Saw some fields of beautiful flowers mixed in with the corn crops.  It was an hour and forty-five minute trip from Cusco to Ollantaytambo where the train station is located that we took to Machu Picchu.  As soon as we entered the city the van slowed down to a crawl; all of the streets were cobblestones.
We were at the train station by 9:30 am.  Our train didn’t leave until 11:15, so we have a bit of time to kill.  But, I love to be early and with the unknown factor of the bus trip; Jim humored me and didn’t complain too much when he realized just how early I had him there.  He loves to arrive on time, not early and not late.  But once we entered the train station we first found a couple from Florida.  The husband was from Spain and they’d lived in Spain ten years.  She was a Spanish teacher before retiring and speaks the language beautifully.   They got on the 10:15 train.  Then we went into the station waiting room and found comfortable seats, clean and free rest rooms and a refreshment bar.  There was a man dressed as an Inca Warrior and he played beautiful and haunting music on his pan flute.    We realized that we were hearing more English than we’ve heard since we arrived. 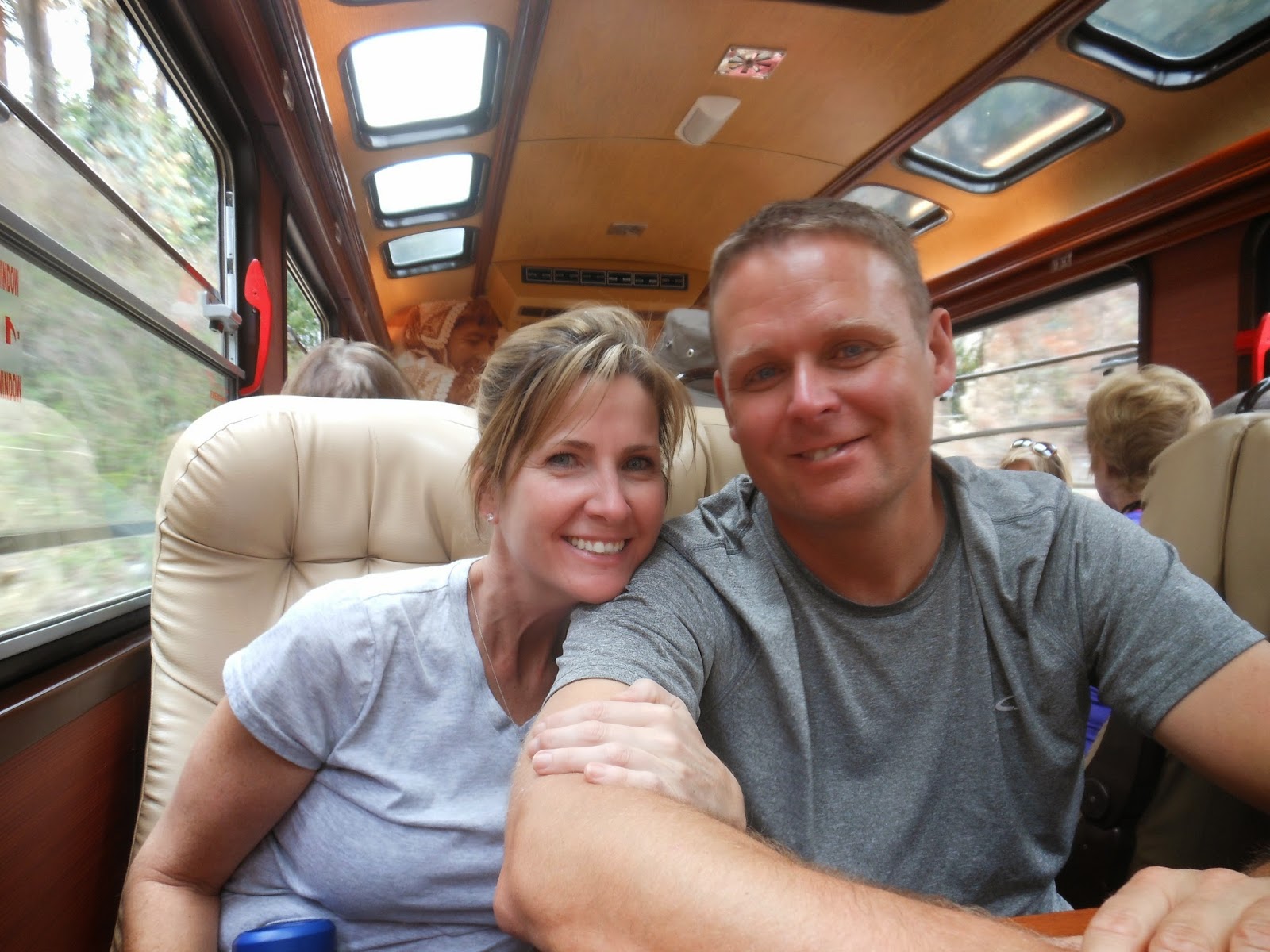 Our train, the 11:15 Inca Rail arrived right on time and we boarded.  It was a short train of only three cars.  Because of the off season we’d been able to upgrade to the Executive Coach for the same price as the regular coach.  We even were served a snack and a drink during the trip.  The train took about an hour and a half traveling through farmland, valleys and finally into deep gorges with one beautiful waterfall crashing down the side of the mountain into the stream filled with rapids along the foot of the mountains.  Soon we noticed that the foliage became very thick and jungle-like as we neared our destination.   Our seatmates were Americans from Chicago, Paul and Colleen.  Paul works six months and travels six months each year; we should all be so fortunate.   Colleen has a busy career that involves regular travel but from a home base.  She still manages to meets Paul at various places around the world regularly.   Delightful and true travelers … definitely not tourists.  Most of their travels this year are in South America; but there are few places they haven’t enjoyed.   I encouraged Paul to begin writing a blog as his stories and travel tips would be an inspiration to many.   This is his second trip to Machu Picchu, he visited thirteen years ago, and they will travel to Columbia after Peru.
Our first challenge after departing the train was to locate our hotel; Denny’s House.  After stopping several people, one finally took us to a policeman to pointed up the street and said turn right.  This is the street alongside of the river than runs through the village.  We headed up to where he’d pointed and just before we turned we saw the sign for the hotel.  We are on the second floor and overlook housing and construction but it will be much quieter than the crashing river in rooms on the front of the hotel. 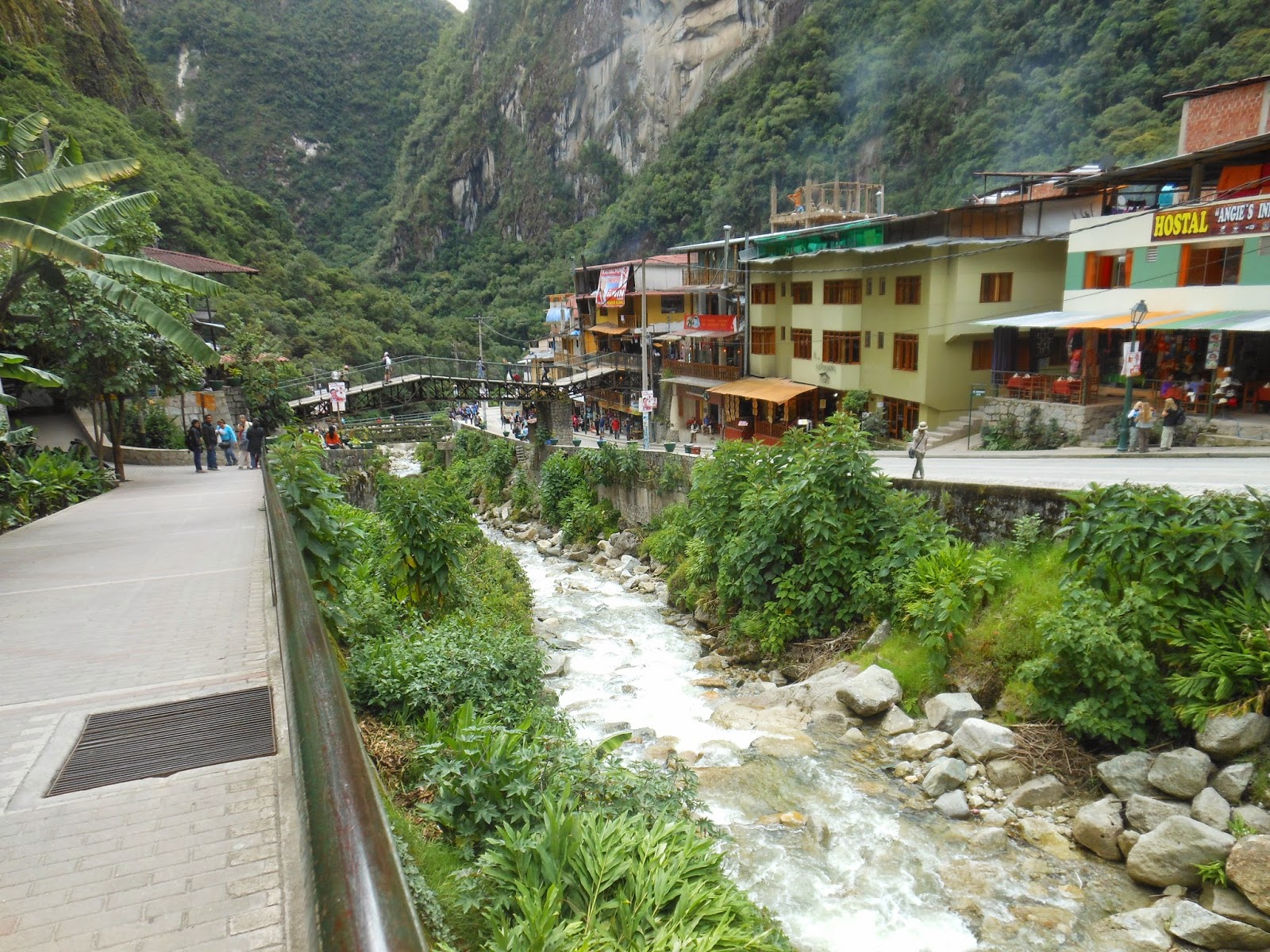 We walked down to the area where we will be catching our bus tomorrow morning that will take us up the mountain to the base of the ruins.  There we purchased our roundtrip ticket for tomorrow.  We could use USA Dollars as long as they were in good shape.  Fortunately, I had several tucked away and we paid $19.00 roundtrip for each of us.   We also found an ice cream shop and enjoyed a cone.  We were surprised to find a Paris food shop with all types of French food including croissants, the first we’ve seen on our stay in Peru.  What we really wanted to find were walking poles for the trek tomorrow.  Not one shop in the village that we could find.  But when we returned to the Hotel the clerk found two poles that were in the storage area and has loaned them to us for tomorrow.  Be aware…don’t wait until you get here to rent your walking poles.  They were everywhere in Cusco but we thought we’d be able to rent them for only one day here instead of three days in Cusco.  Wrong!

We discovered that we are right next to the beautiful soccer field complete with artificial turf and lights.  We had a parade of school children this afternoon; not sure what the theme was about but they seem to have fun.  There are hot springs here that are very popular with the visitors but we sent our swimming suits home from Florida.  A fun item is the size of the paper napkins that are used; they are one quarter of the size of a standard paper napkin.   Paper must be very precious in Peru.

It’s going on six o’clock now and we’re heading out for some dinner.  I’ve found Cuy (Guinea Pig); but they only serve whole ones and it’s too much for one person.  Jim refuses to even be at the table if I order it so guess I may have to forgo tasting the favorite special dish of Peru.
When we return I’ll post this and attach the slideshow….stay tuned for tomorrow…if it rains who knows what will happen!