A RAINY SUNDAY IN PARIS

We woke to rain on this first Sunday in May; and many museums are free on the first Sunday of each month but we've learned that you must also be ready to stand in very long lines.  We saw them today outside the Pompidou Museum; at least four blocks long! We were up and out for ten o'clock Mass at the l'eglise Saint-Merry that is just around the corner from our apartment near the Pompidou Center.  A beautiful old church that is badly in need of restoration. There were about fifty people attending the mass.  An unusual "for us" part of the service was dipping the host into a cup of wine (optional) before putting it into ones mouth.  A nice custom I thought.  The organ was beautiful and we enjoyed the Mass even though it was all in French except for a few Latin parts. 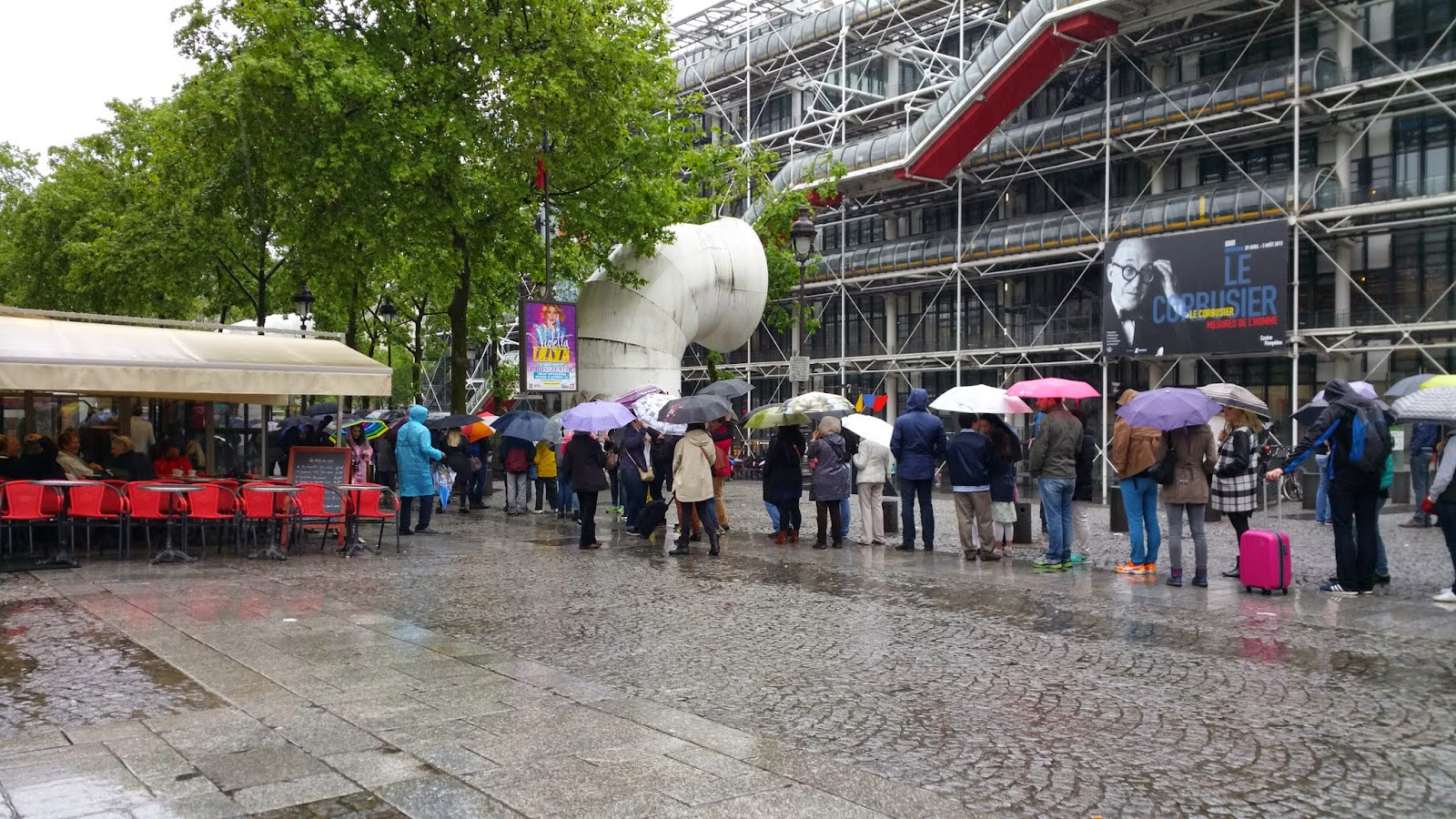 After Mass we dodged the rain puddles as we headed home and that is when we found the very long lines of people waiting for the free entry into the museum today.  Not all museums are free, especially the private ones.   Stopped at the apartment to dry out a bit and then walked over to Mary and Phil's where we left Jim and Phil working on their computers while the twins had an outing in the rain.

First we walked around the corner to the Rambuteau Metro Station and took that to the Hotel de Ville Station where we changed to the #1 line that dropped us off right inside of the Louvre Museum. 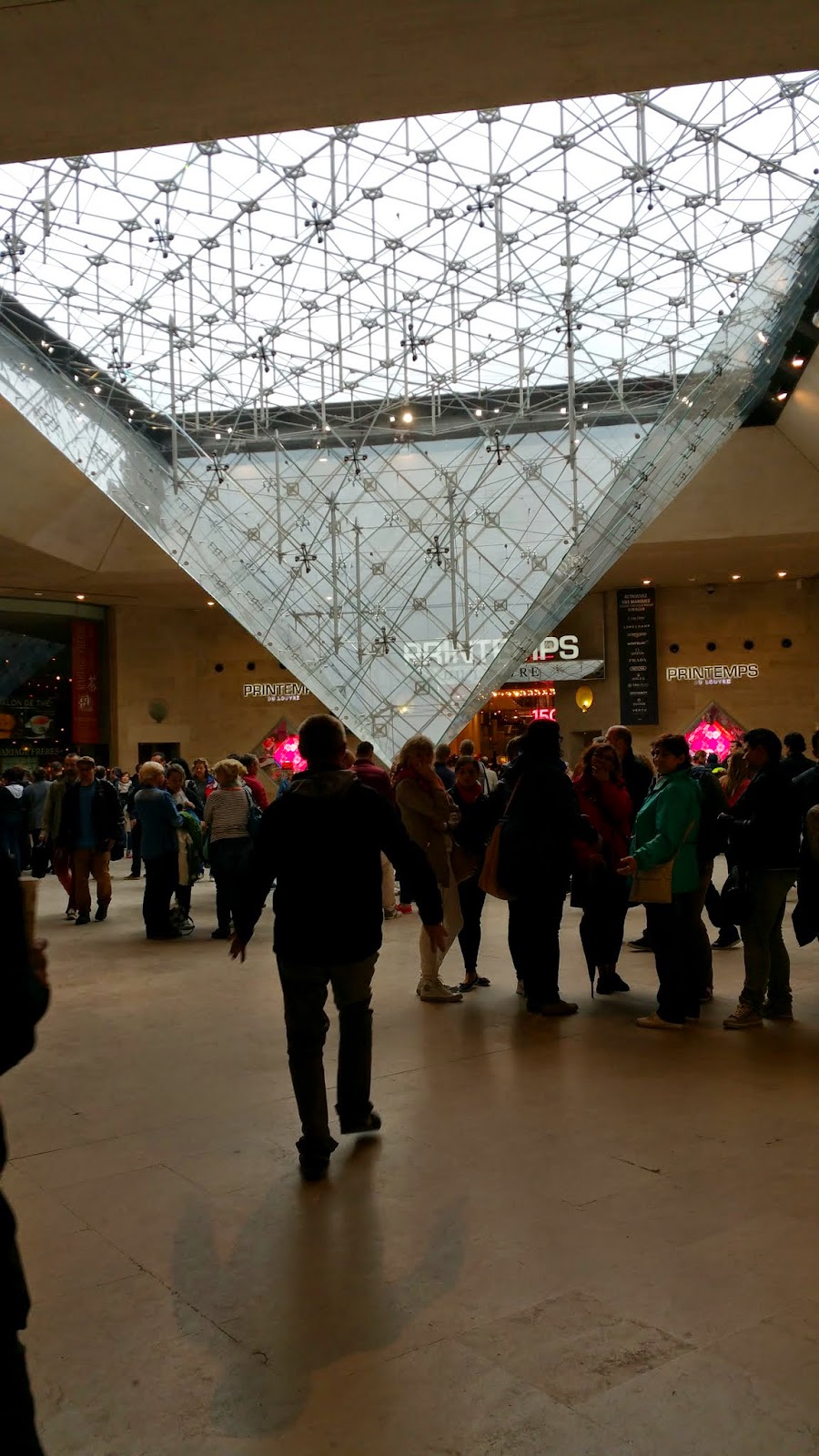 Well actually we were going to the Carousel Shopping area inside of the museum buildings.   The lines were very, very long again with people waiting to enter the Louvre Museum.   But this one is not free on the first Sunday except during the winter months.  I wonder how many people standing in line were not aware that they were going to have to pay the regular entry price!

Mary wanted to visit this shopping center for two reasons:  first she loves to see the bottom of the pyramid that is inside of the Museum and secondly she wanted to visit the Apple Store that is located there to purchase a French Plug for her IPhone "to insure that she would come back to France again".  When she was her in 2013 with me she purchased one for her IPad and by golly...she did come back again!   Something like rubbing the boar in Florence after dropping money in the water!

We walked outside to Rue de Rivoli and hailed a cab and asked him to take us to the Pont del Alma.  A very nice man who spoke excellent English.  He said "you know, that is not really a monument to Princess Diana?"   We said 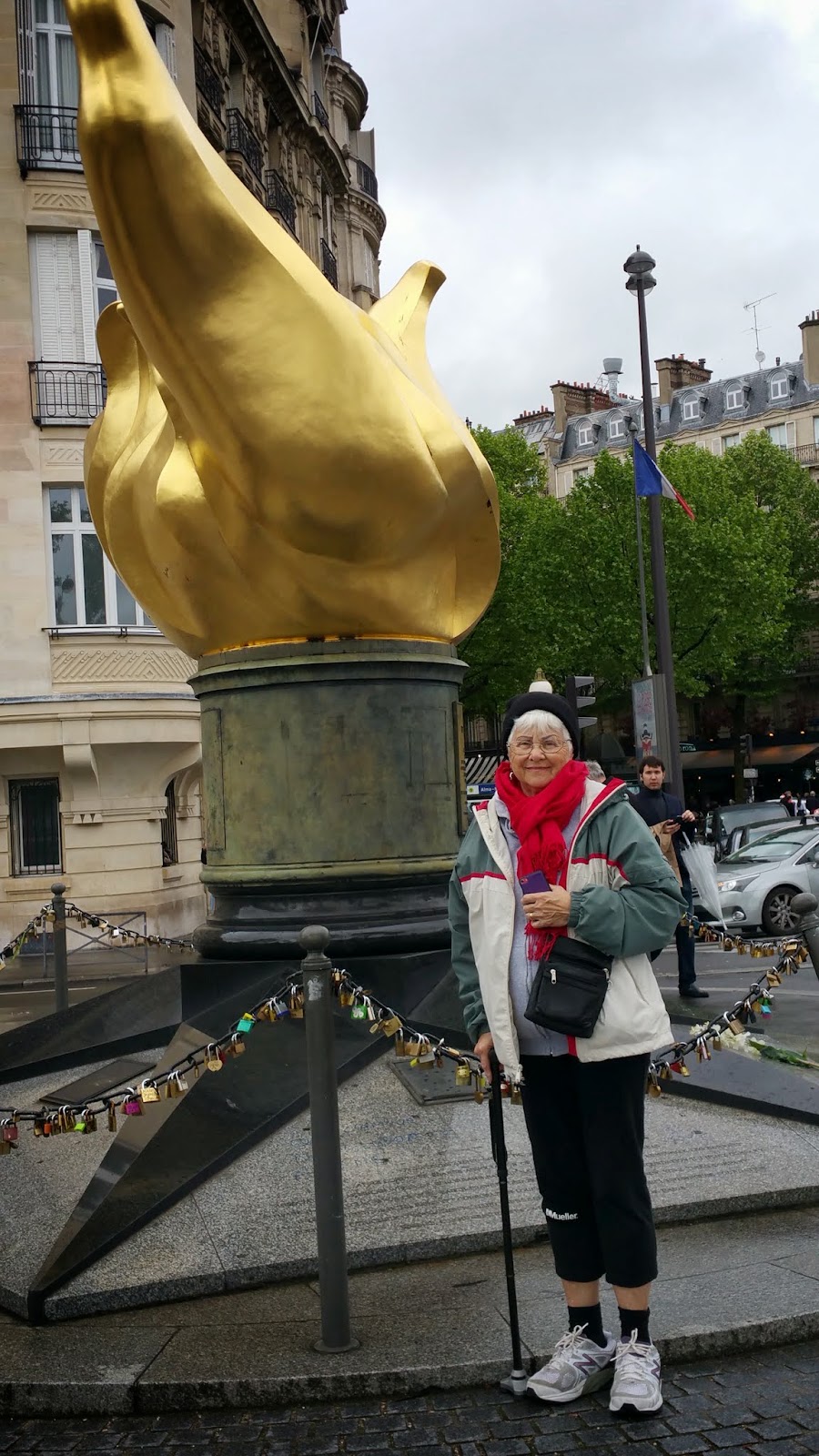 yes but that we always enjoyed reading the things that people wrote on the wall in tribute to her.   It's really a monument to the friendship between the USA and France; it's a large torch.  But when Princess Diana was killed in a car accident under the monument; it because a place for people to visit and leave flowers and notes.  The city has finally painted over the "graffiti" about her but there were a few flowers.  I think this is probably the last time I will visit that particular site.

We found the Metro Station right there and decided to use that to reach our next spot; the large department stores of Galeries Lafayette and Printemps.   On my bus ride to the train station yesterday I had seen their beautifully decorated windows.   We walked the length in front of both of them admiring the window displays.  Printemps was especially beautiful as they are celebrating 150 years!  One of the most unusual things we saw was a new fashion for the women:  black nylon stockings with holes in them much like the current fashion with Levis. 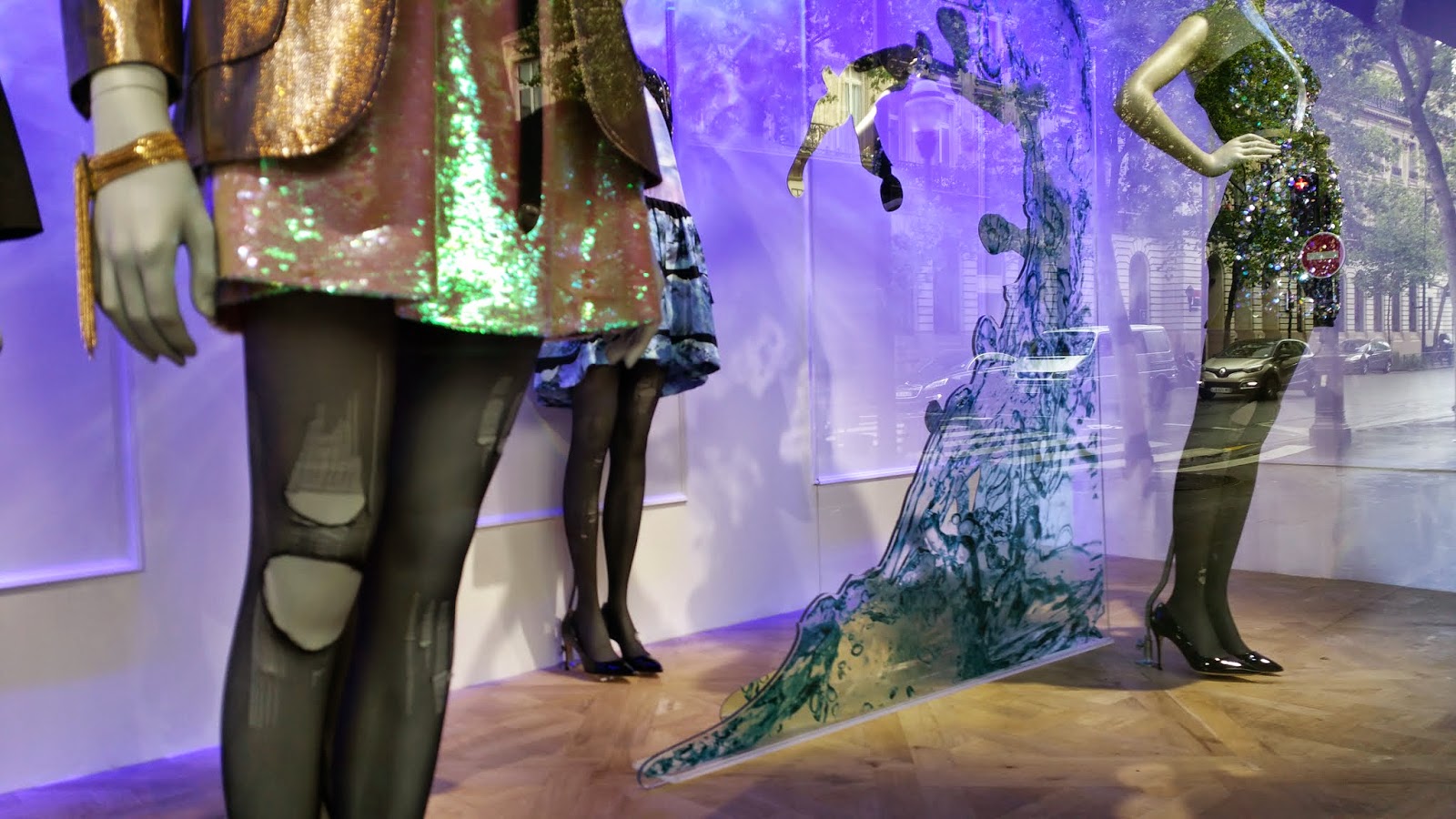 We then got on Bus # 29 and headed home.  Oops...it passed our street; when I asked the driver he said they don't go down that street on Sundays.  Too small and too crowded.   So we got a longer walk home than expected when we got off at the next stop which was over by the river.  But we had the opportunity to walk by our apartment and I took Mary up to see our digs.  From there we walked to her apartment; picked up the boys and headed back to the Archivers bar/restaurant across the street from our apartment.  Phil walked the whole way...slowly but we all walked the four blocks there and back after an early dinner.

On our walk home the sun came out and it was the end of the rain for the day.   We enjoyed another evening of cards and Mary and Jim won this round.  Must be time to change partners again.