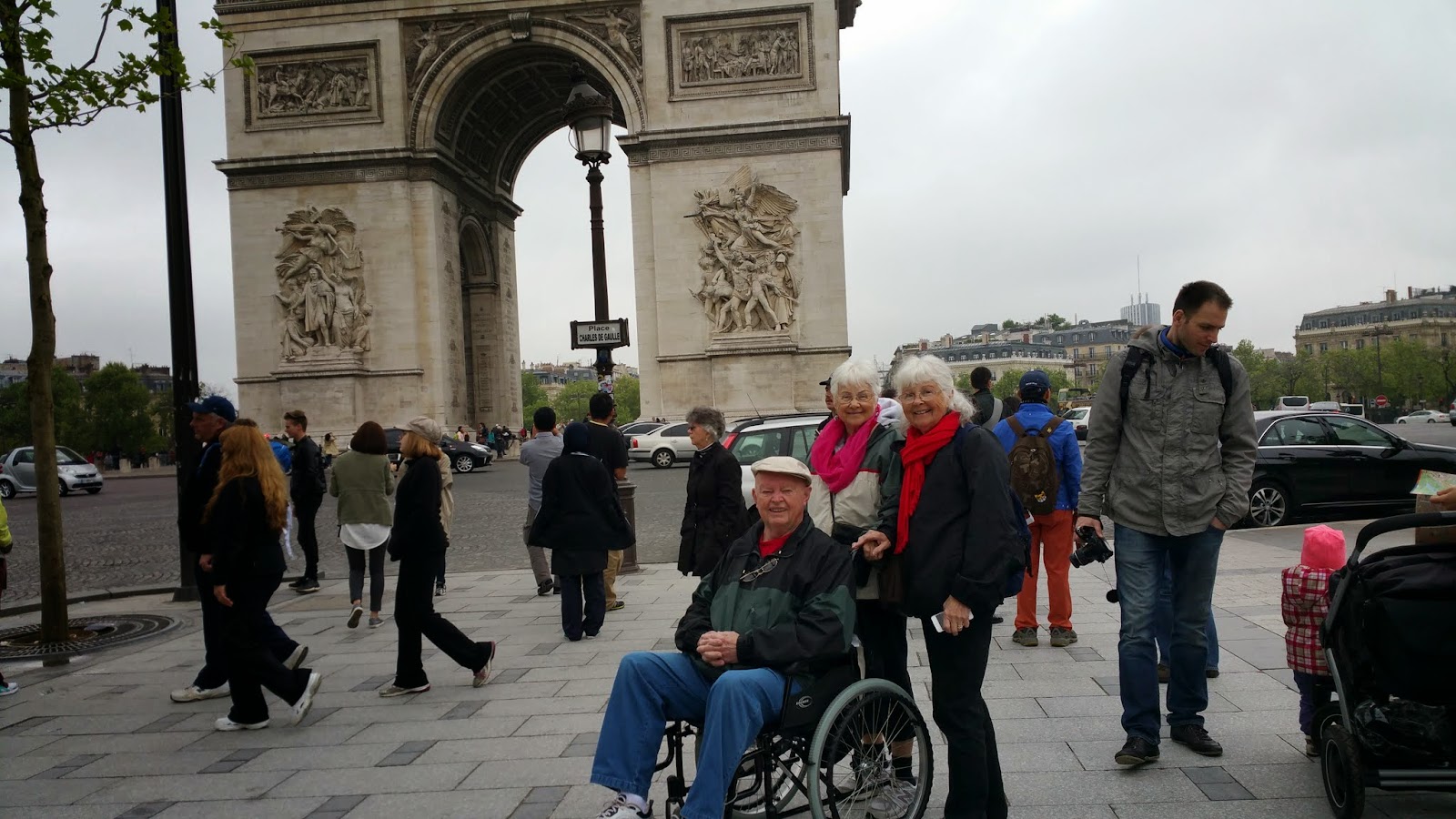 We walked to Mary and Phil's at ten o'clock this morning, weather is overcast but no rain.  However, rain was expected by three o'clock this afternoon.  And yes...it arrived right on time but it's a gentle rain and the people are still sitting outside the restaurants under the awnings; kept warm by the overhead heaters.

We walked around the corner and hailed a taxi cab that had a delightful driver named Frankie.  We all talked non stop during the entire drive.  He drove us right up the grand avenue to the top at the circle around the Arc de Triomphe.  We took the requisite photos from there because of the stairs required to go over to the momument. 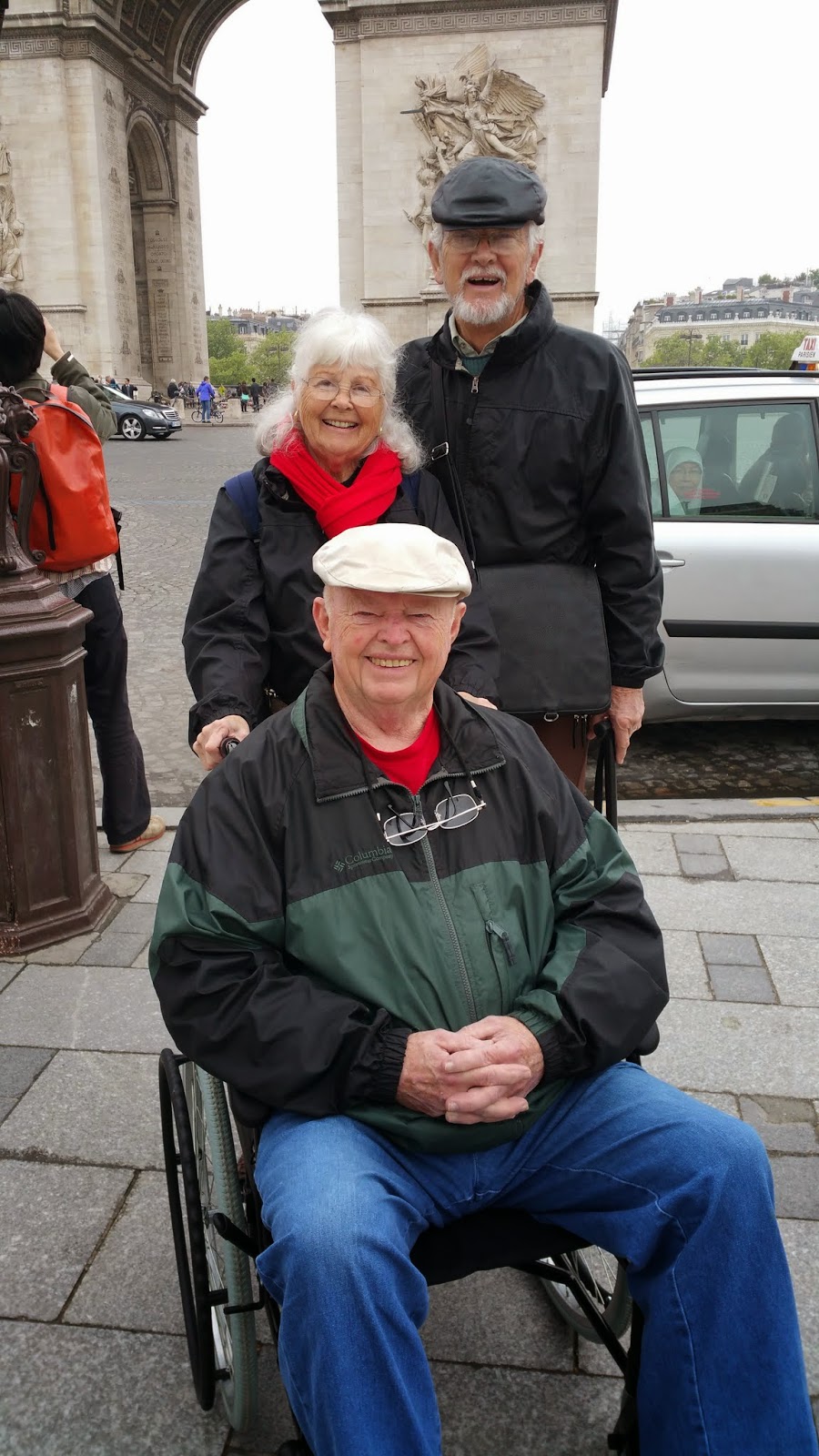 Then we all started walking downhill towards the Gardens of the Tulleries.   We took turns with the wheelchair.  Mary is having difficulty walking because of a bad knee and so Phil walks a bit now and then to give her a rest; otherwise she uses his cane to aid in her walking.  It is a dry morning but cold.  Along the way Mary purchased a stocking hat and gloves for Phil to help keep him warm.  They'll come in handy next week for our trip to Normandy.

We stopped at several stores but the favorite for the boys was the Peugeot which had some great new cars for them to investigate.  They would not allow the wheelchair inside so with the cane and Jim's assistance he managed to walk inside the store.  They even purchased a toy model for Phil to take home as a souvenir.    Notice in the photos the clothes that are being worn...pants are high water and very tight on the body.  Women and girls mostly wear black tights and very short skirts over them.

When we reached the Tulleries; Jim left us and walked to the Petit Palais for an exhibit called the "Baroque Underworld Vice and Destitution In Rome in the Seventeenth Century".    We hailed a taxi cab and headed back to the apartment.  It was a fun two hours of walking the Avenue des Champs-Elysees.  Jim didn't enjoy the exhibit; in fact he said it was very depressing.

I made sure that Mary and Phil were settled in and then I caught bus # 29 to the Gare Lazare to purchase our tickets for the Tuesday trek.  It was a fun bus trip past the Opera House and the department stores with their fabulous window decorations for spring!  So many things to visit and so little time.  I've been spoiled by longer visits in the past few years. 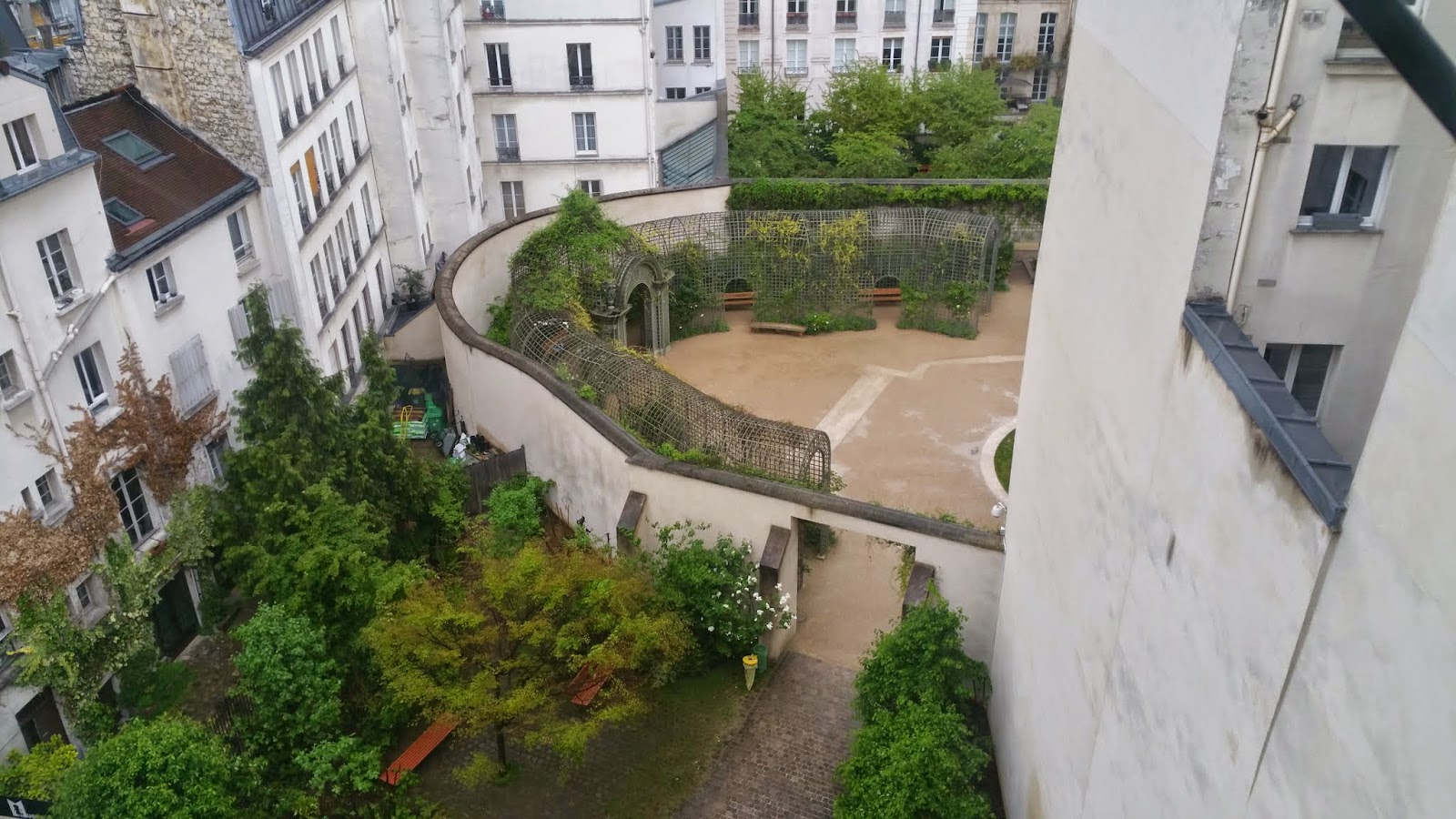 We're doing a train trip to Caen in Normandy on Tuesday and Wednesday to see the D-Day invasion museums and sites.  So glad I got the tickets early as it took me about half an hour because of the issue of the wheelchair.  Apparently when we arrive at the station there will be someone to assist us with getting Phil on the train.  We saved thirty percent on the tickets by getting non-refundable tickets.  Jim called me on the cell phone while I was there.  He was back at the apartment with no keys; I suggested he go to the bar across the street and wait for me.  I did return by taxi rather than the bus to speed up the time it took to return.  Once home I did some grocery shopping; and about four o'clock we put our things together and braved the sprinkles to walk to Mary and Phil's apartment.  We stopped at the butcher across the street from their building and purchased a hot roasted chicken for our dinner.  Mary had already prepared the vegetables. 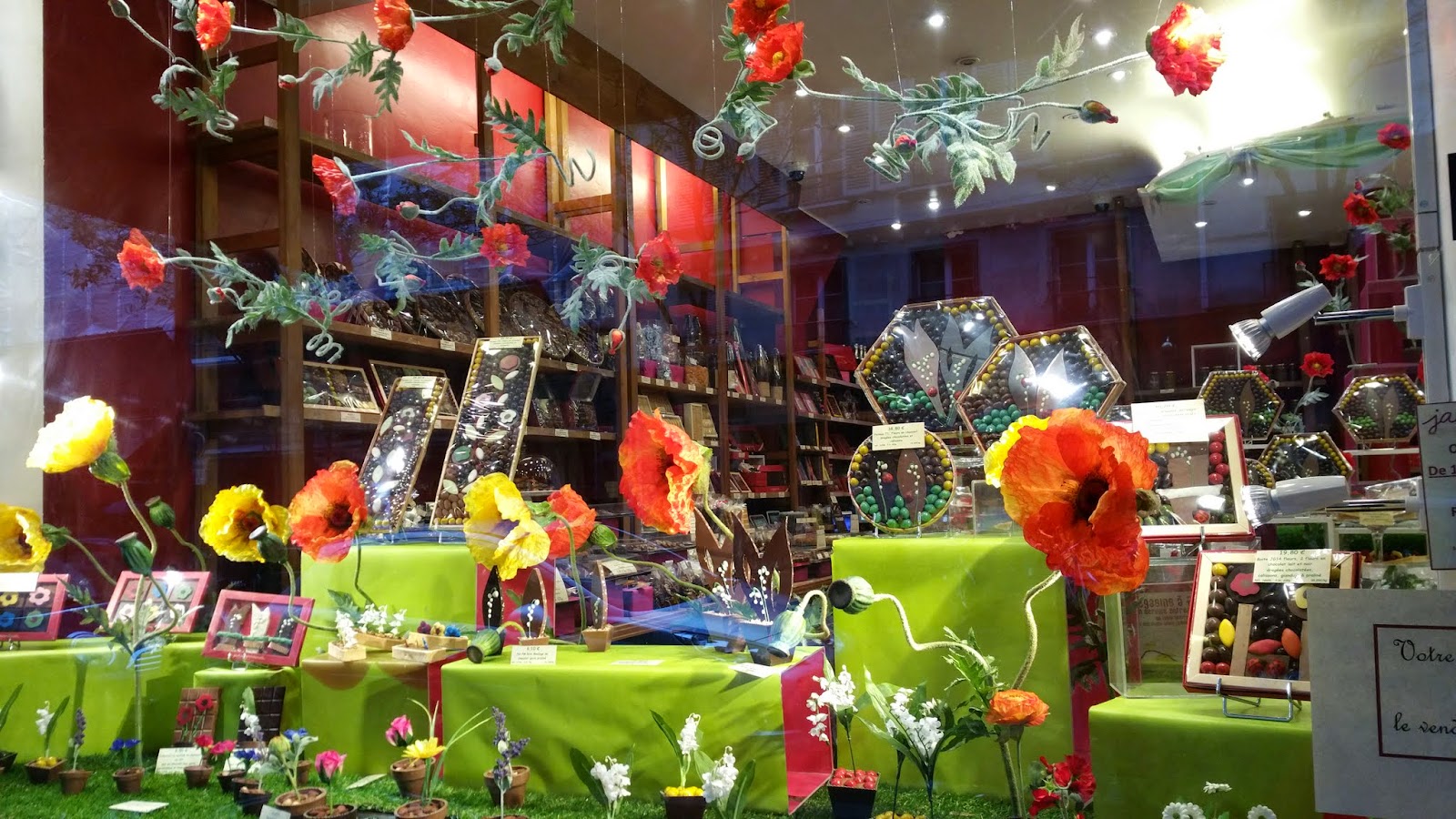 We enjoyed our dinner and then switched partners for the card game of Hand and Foot.  Phil and I against Mary and Jim.   It was a real squeaker, the winners changed with each hand but in the end Phil and I won the day!  We then all took turns riding the tiny elevator to their seventh floor to see the views of the roof tops in Paris.  Lots of fun and then we headed home for the balance of the evening in our apartment.  I took a few shop window photos for you; the windows are beautiful in celebration of May 1st, a bank holiday in France for the weekend.
au revoir