OUR VISIT TO NORMANDY AND D-DAY

It was seven o'clock Tuesday morning and we were all standing outside of Mary and Phil's apartment waiting for the taxi cab that we'd ordered using the Internet.  He arrived right on the dot of seven and we were off on our adventure to Normandy for two days and one night.  Best of all the rain has stopped and we're expecting mostly wind for today when we arrive in the north. 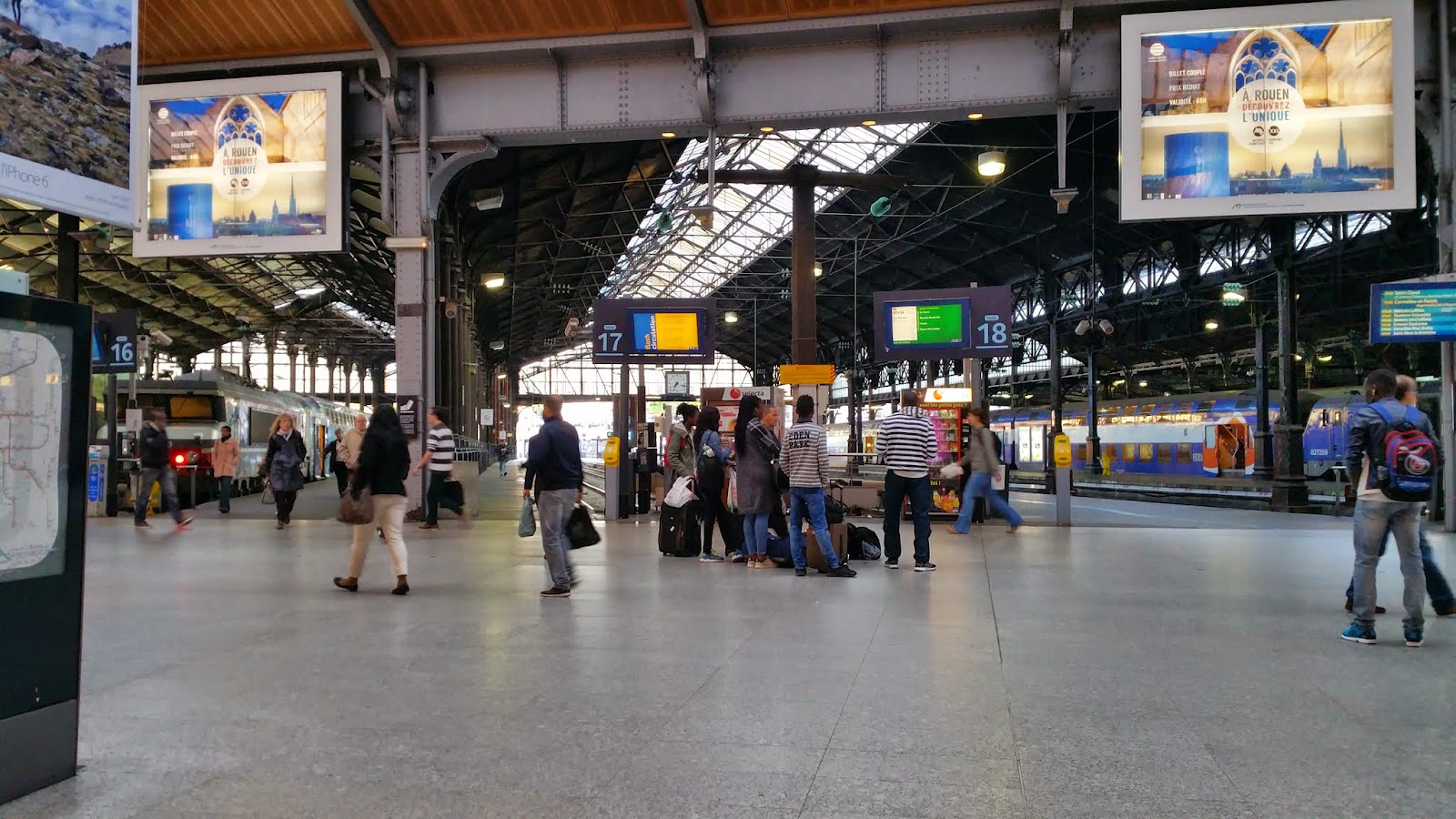 Soon we were at the Gare Saint Lazare train station and headed towards the office for assistance for handicapped that I'd found on Saturday when I purchased the tickets.  We'd been told to arrive about an hour early if we wanted to use the service and we were at least an hour early and they had us wait in their waiting room until the team of three arrived to facilitate Phil's train adventure.  We were along for the ride.  First we headed for the toilets so that everyone could use the facilities before getting on the train.   Then we were off to the platform for our train.  They punched our tickets for all of us and handled Phil in the wheelchair.  Mary, using the cane, had to hustle to keep up with them. 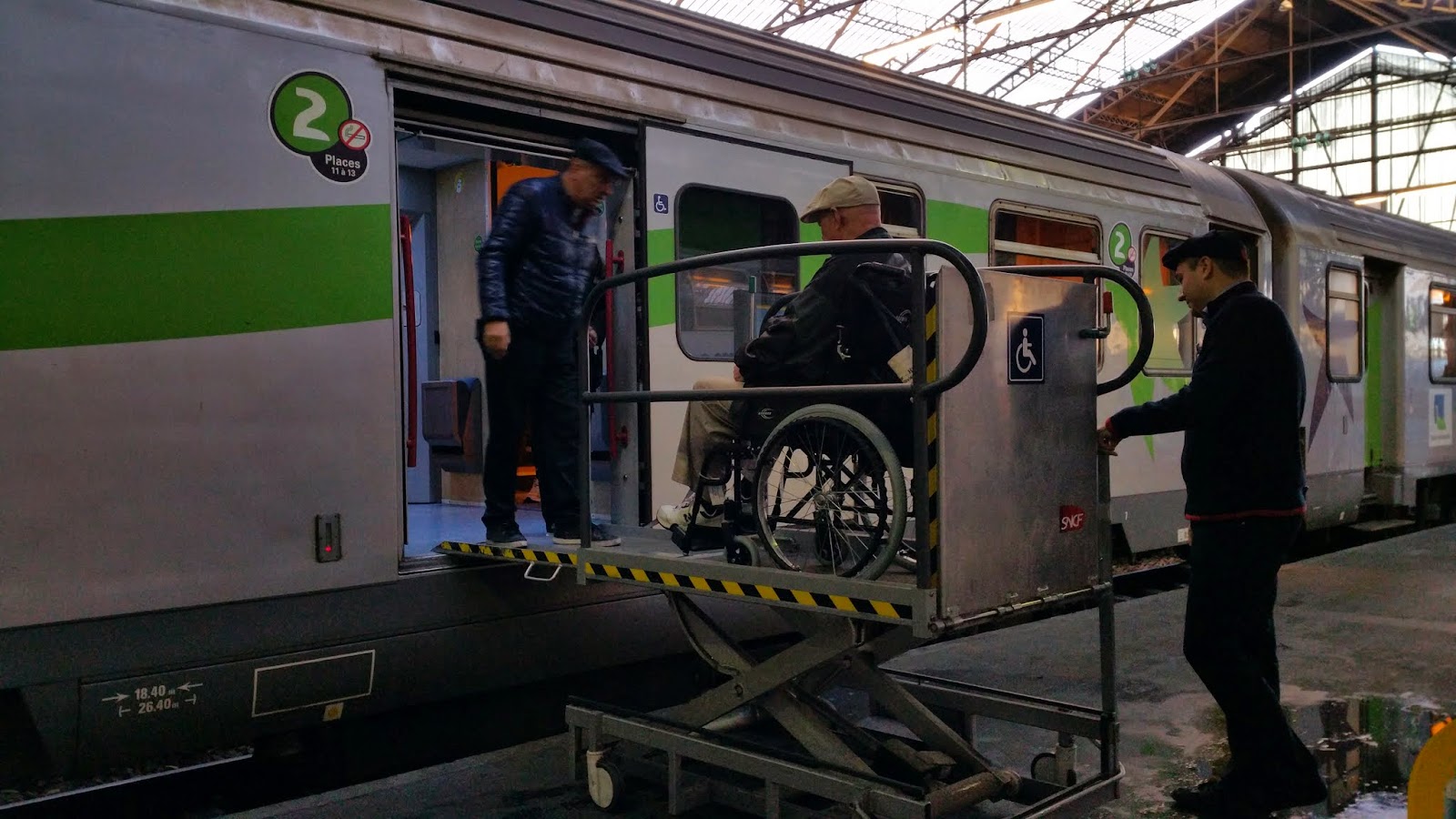 It was amazing; we had our own car!  There was a lift to put Phil on the train without his having to get out of his chair.  The car is designed for up to three wheelchairs and their caregivers.  It had electrical outlets for us to charge our phones and a handicapped bathroom.  We occasionally had people coming through from other cars but we mostly had it to ourselves for the two hour journey.  Plus they put us on early so we didn't have to wait in the station. 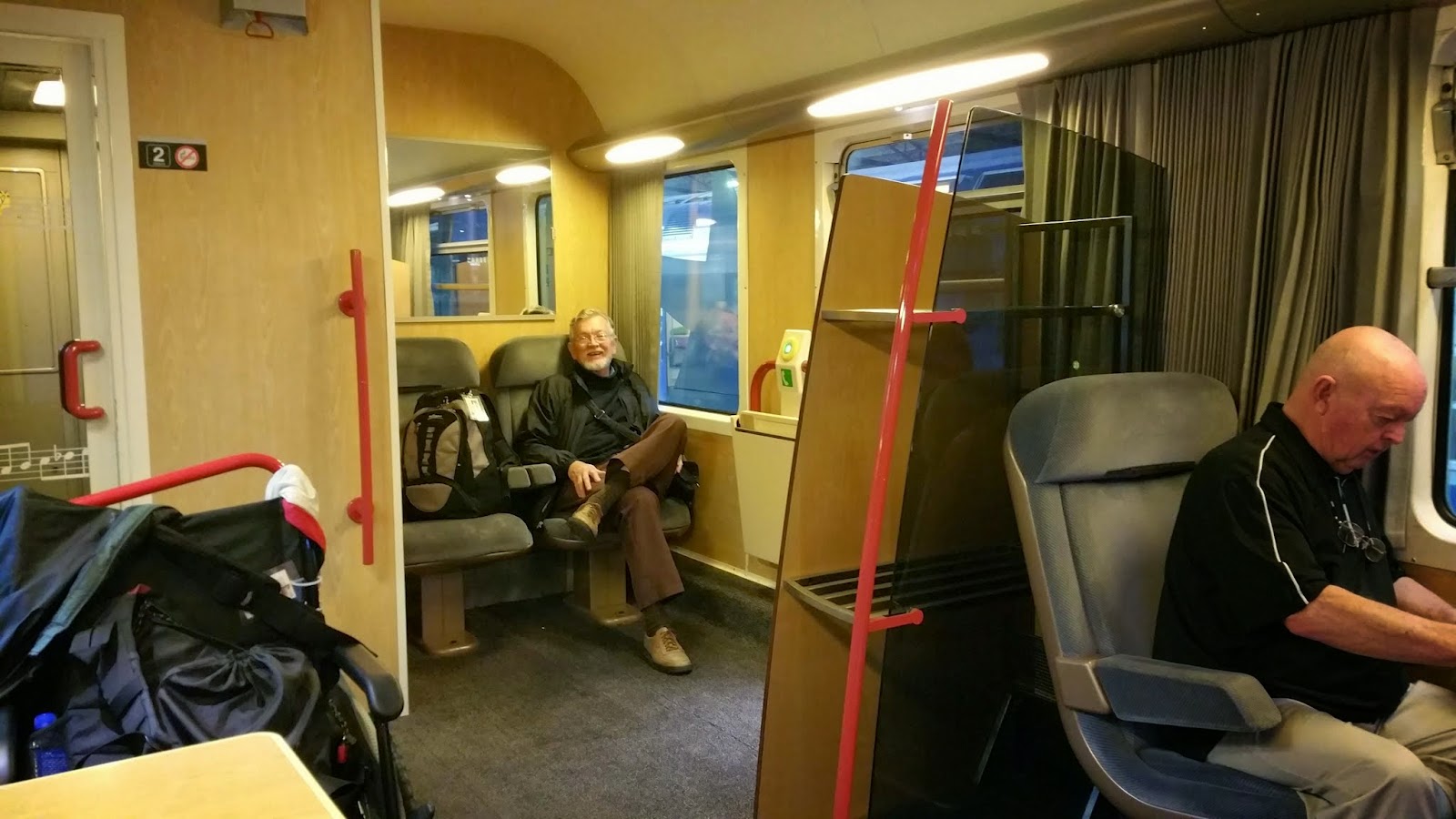 We saw sunshine, rain, sunshine, rain and finally sunshine in Caen.  Along the way we went through the towns of Mante, Evreux Normandi, Bernay, and Lisieux before arriving in Caen.  We were very excited seeing Lisieux as we could see the Basilica from the train.  Mary and I spent hours there on our trip in 2009 to see the home of St. Theresa of Lisieux and the Basilica.  Lisieux is the second town of Pilgrimage in France, the other is Lourdes in the South of France.

We had people waiting for us when we arrived in Caen to take Phil off of the train and into the station.   We crossed the street and picked up our rental car at Enterprise Rental Service.   We have a black Citeron with GPS...this time build-in.   She finally got us out of Caen and over to the Caen Memorial, but not without lots of U-Turns! 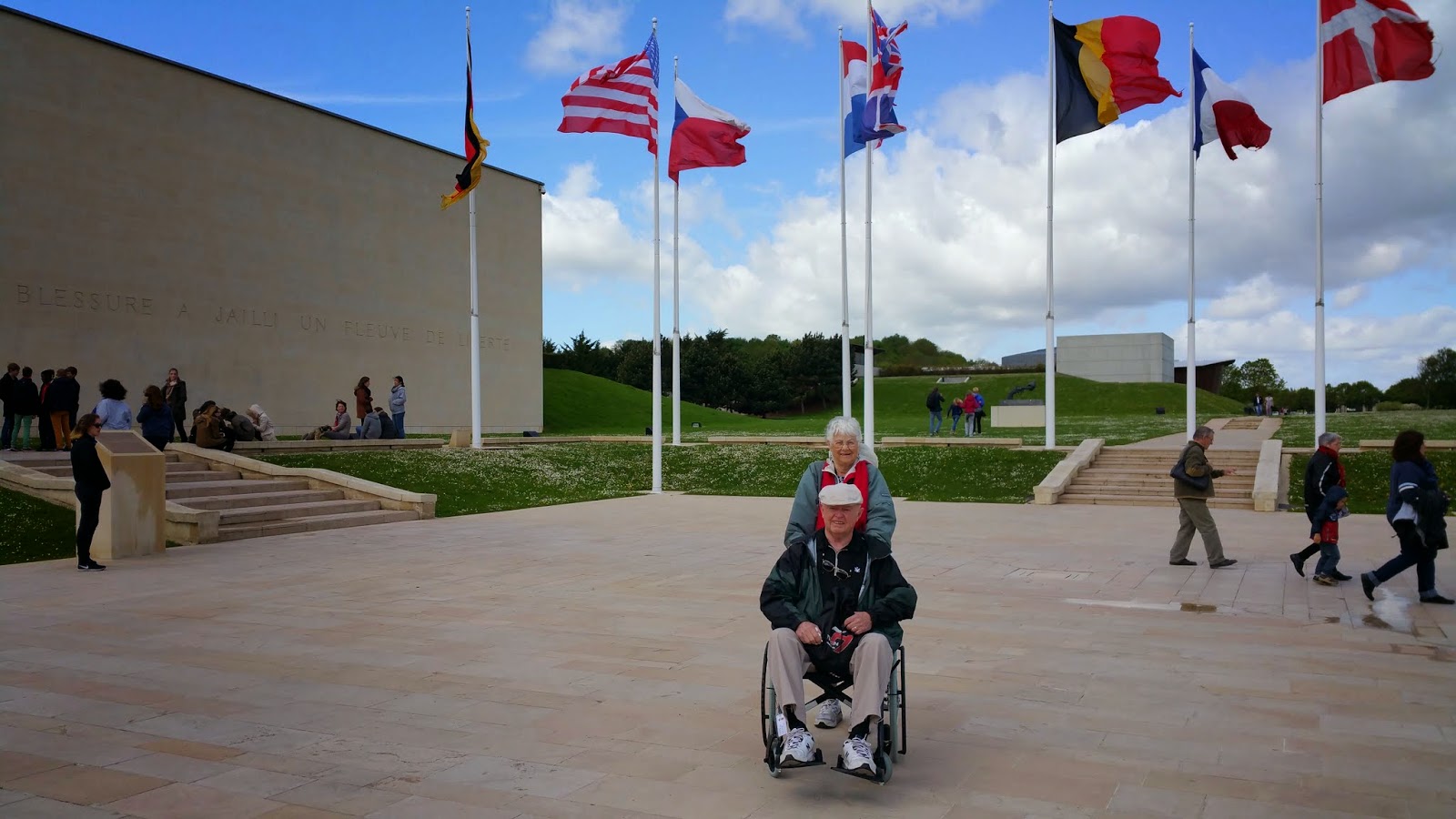 It was about noon when we arrived at the War Memorial Museum.   We spent about two hours there before heading back out on the road about two o'clock to find the Arromanches Les Bains on the coast.  This is the area where they built huge floating docks to unload equipment right after the invasion.  It worked beautiful for a short time and then a major storm tore it apart.  Today pieces are stuck in the sand, some close and more off in the distance.  At low tide you can actually walk to some of the ones close to shore. 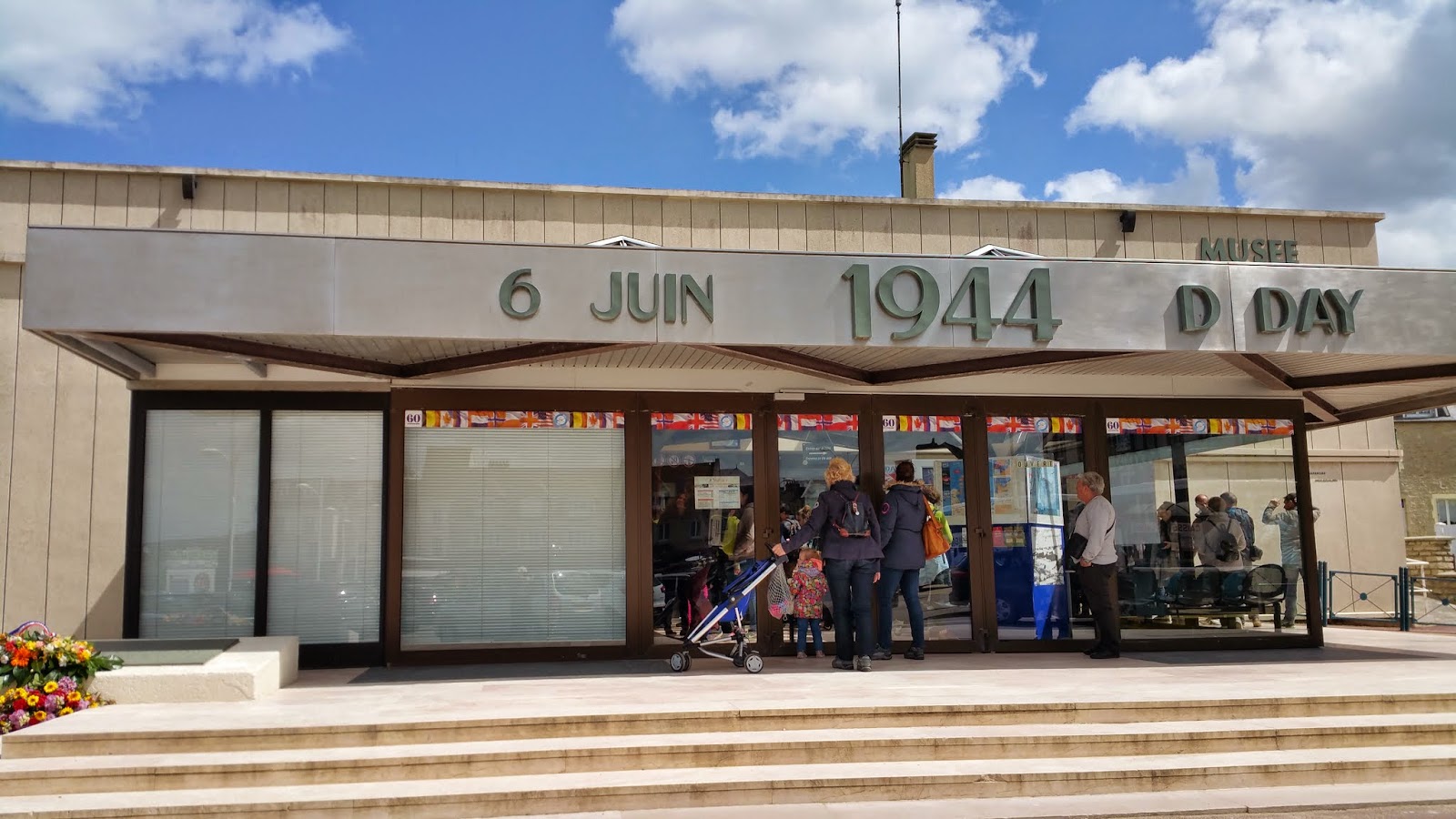 A fun note:  while there we walked to a store so that Mary could find a key chain for their travel tree; and Jim handed me a bottle of liquor to purchase made from apples as that is very popular in this area of France.  It is called Calvados.   I was surprised when the clerk said forty two euros.  Wow...Jim is springing for a really good bottle.   Only later when he opened it in the hotel room and discovered it was forty proof did I mention the price...he was shocked....he thought it was two euros!  Not sure just how we'll drink it all before we leave for home on Friday.  We may leave it for our manager of our apartment. 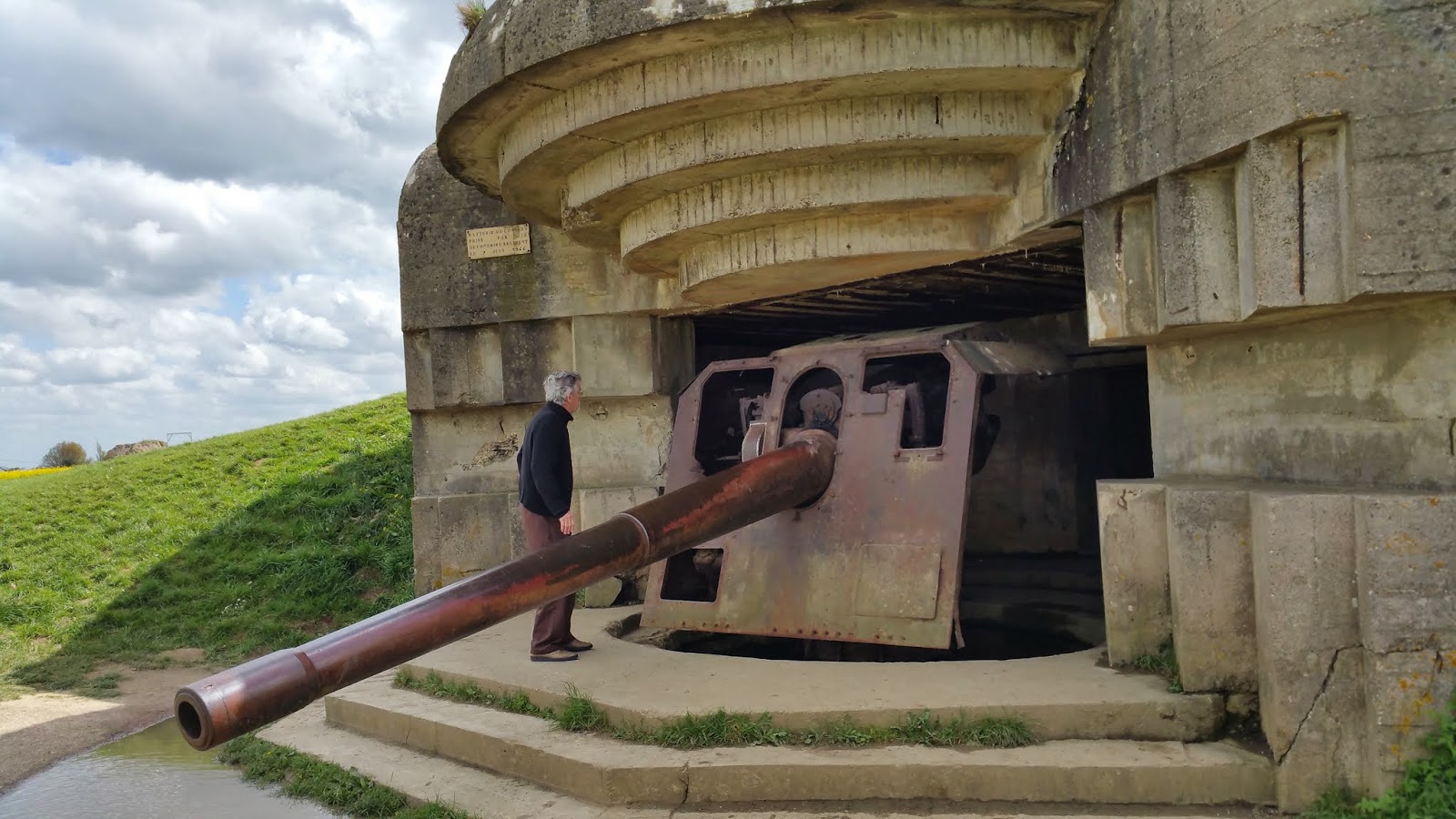 Leaving there we drove further west along the beach to the Batterie de Longues; a group of four huge concrete buildings that each housed a gun that could shoot two miles out into the water.  Jim didn't remember that we'd seen these in 2012; but it was still fun to see them again.  We have good friends who live in Florida who just posted a photo at this site on Facebook a few days ago.  They stopped here during a cruise!  Small world.   It would have been fun to accidentally see the Hermans here.  We've done that more than once during our years of traveling.

By this time it was nearing four o'clock so we decided to head for our hotel outside of Bayeux for the night.  We had some problems with the GPS and actually ended up using an app on my phone to get us to the Hotel.  But it's clean and close to the highway for tomorrow.  We walked next door and had an early dinner before playing two hands of our favorite game in the lobby.  I've been busy with two days of journals to do.  But, love to do it while it's fresh in my mind.  We had rain just as we arrived at the hotel.  Hoping for sunshine tomorrow as we visit the American Cemetery.