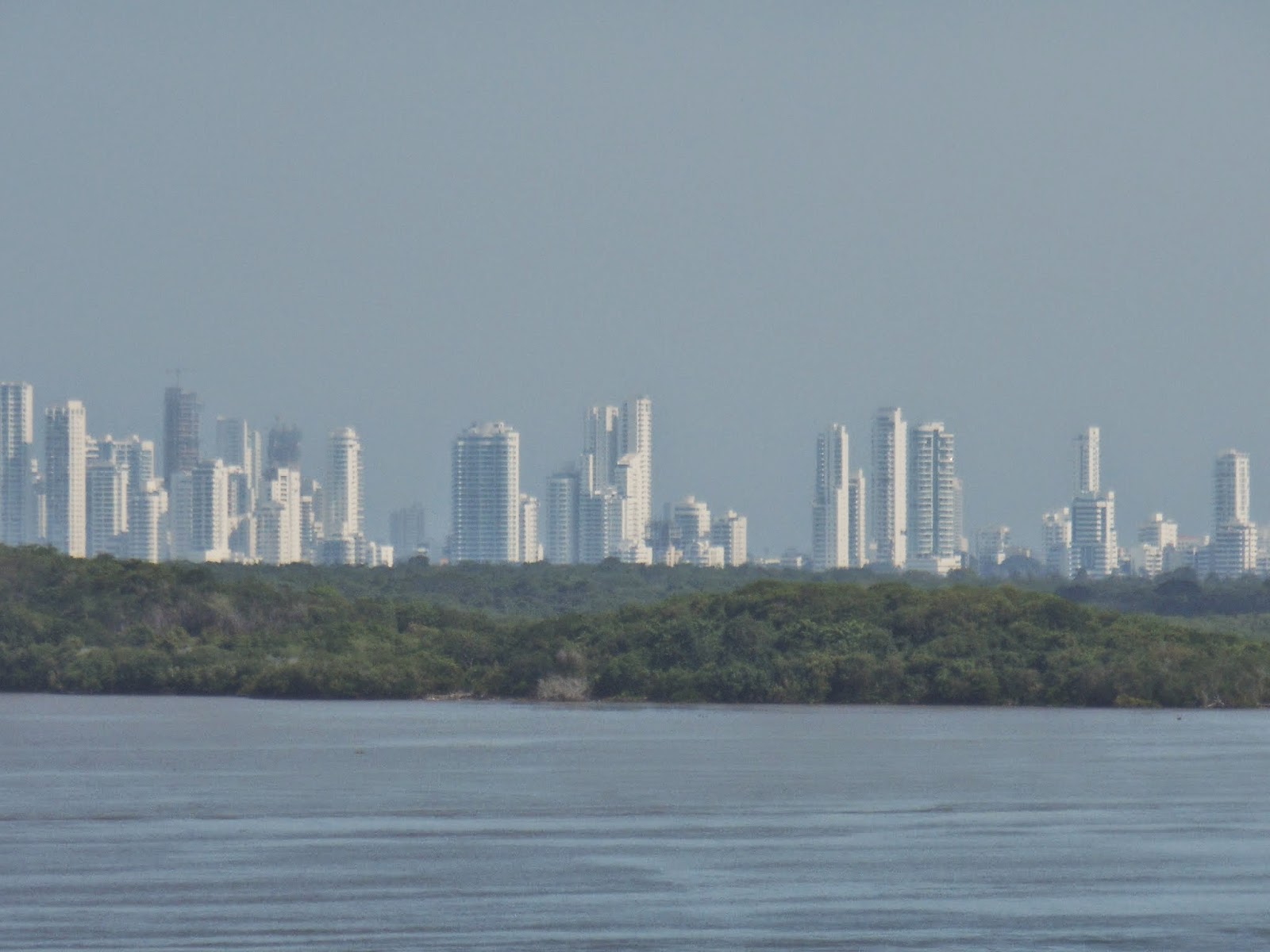 Tuesday was the Panama Canal and Wednesday morning we arrived in Cartagena, Columbia about eleven o’clock in the morning.  We watched the coastline and could easily see the beautiful skyline of skyscrapers while we were still far from shore.
After docking we headed for the buffet and lunch at 11:30 am.  Then off the ship to the waiting shuttle buses that took us to the Port Entry building.  There we enjoyed watching the pink flamingo birds, beautiful peacocks that could not be enticed to open their beautiful tail feathers.   There was a large iguana and many other birds.  They were behind a short fence but were feed regularly so didn’t attempt to fly away. 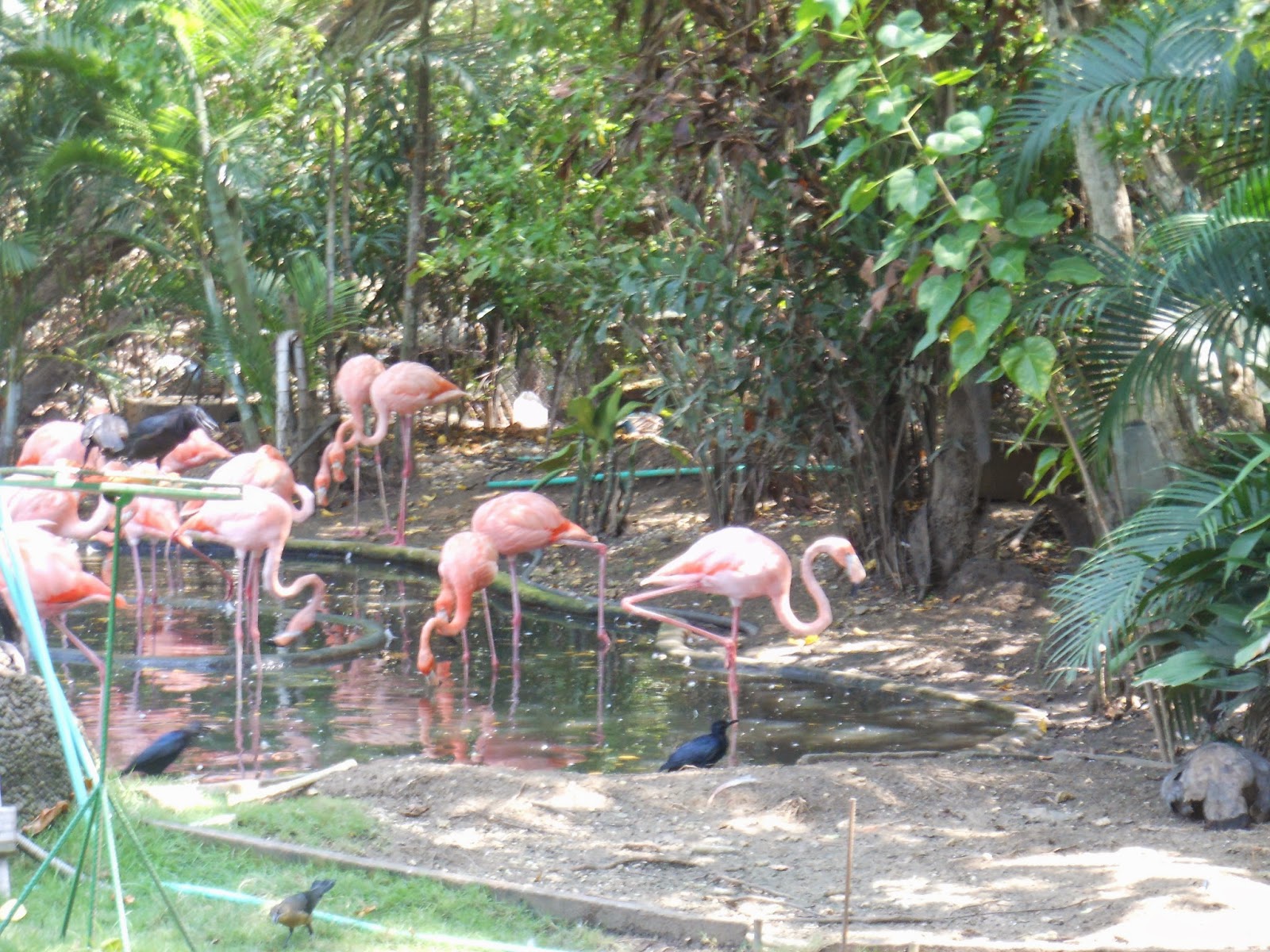 After strolling through the gift shop and trying on many hats we made it through without purchasing anything.   The other side of the building had many different types of birds that were flying over our heads and landing on the trees that also head monkeys.   Lots of fun and great photo opportunities.  Eventually we were at the Taxi Stand.  Everyone was offering different rates but we’d been told before that $20.00 was the going rate for a cab to the Old Walled Town of Cartagena.
He was a nice man, not much English, but the cab’s air conditioner left much to be desired.  We were all sweating profusely by the time we arrived at the walls of the old city.  It was not raining but the humidity level was so dense that it was 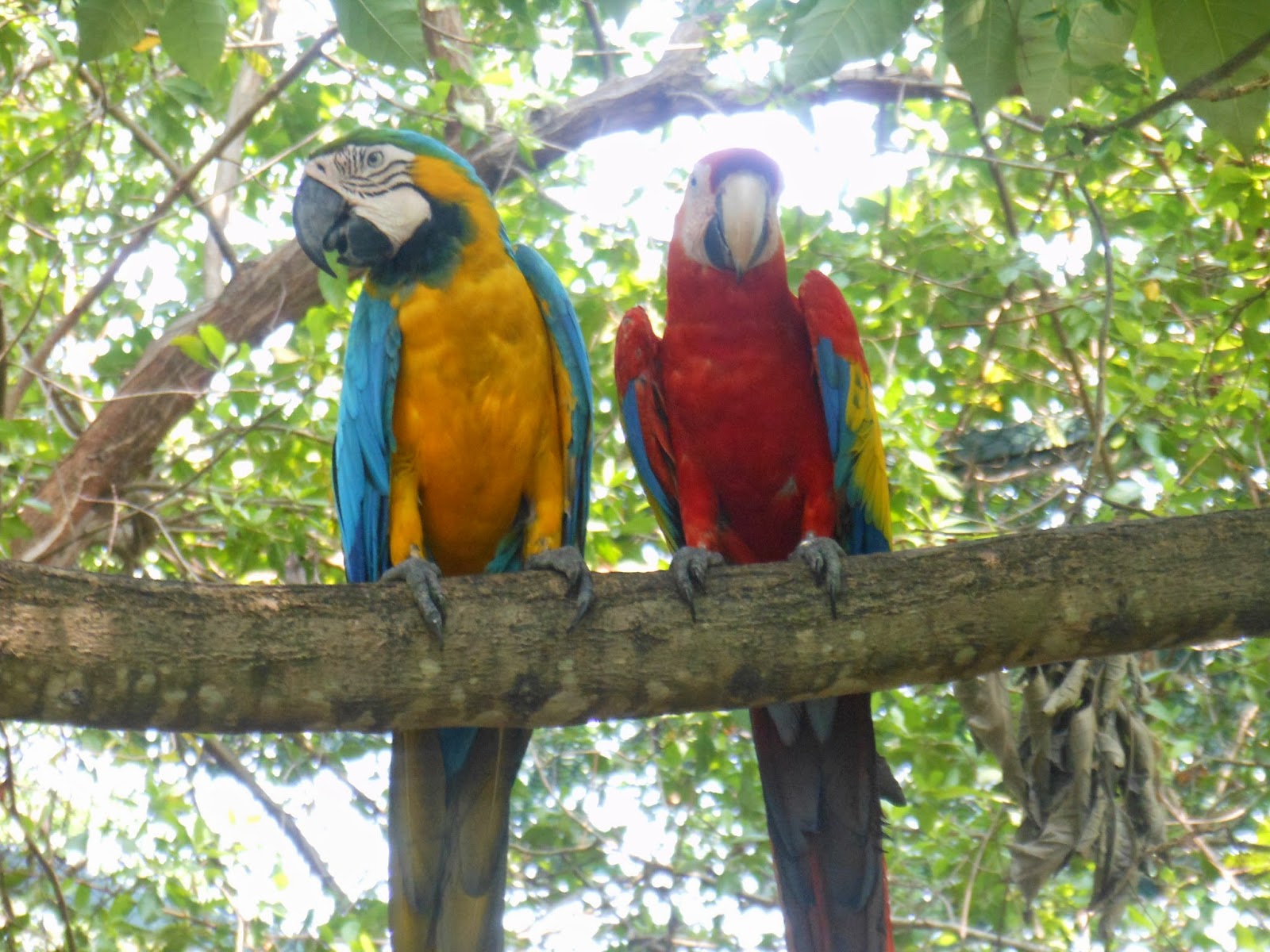 difficult to breath at times.

Leaving the cab at one o’clock we decided to return at three o’clock and hopefully meet out same cab driver for the trip back to the ship.  As soon as we walked into the tiny streets that swarmed with yellow cabs we were easy targets for the vendors.  They had Jim trying on hats all the time and Dave actually purchased a shirt from one fellow when the price became so low he couldn’t resist the bargain!
Suddenly we saw the statue of a reclining nude who was more than a few pounds overweight.  Yes, a sculpture by the famous Botero .   Jim couldn’t resist a photo with his hand above the very hot to the touch breast of the woman.  He took a lot of ribbing by the tourists in the crowd!
The Cathedral was not open, much to our dismay.  It is only open in the morning and again in the evening.   The Museum was open but they wanted $16.00 per person and we didn’t have much time was again…we walked past the venue. 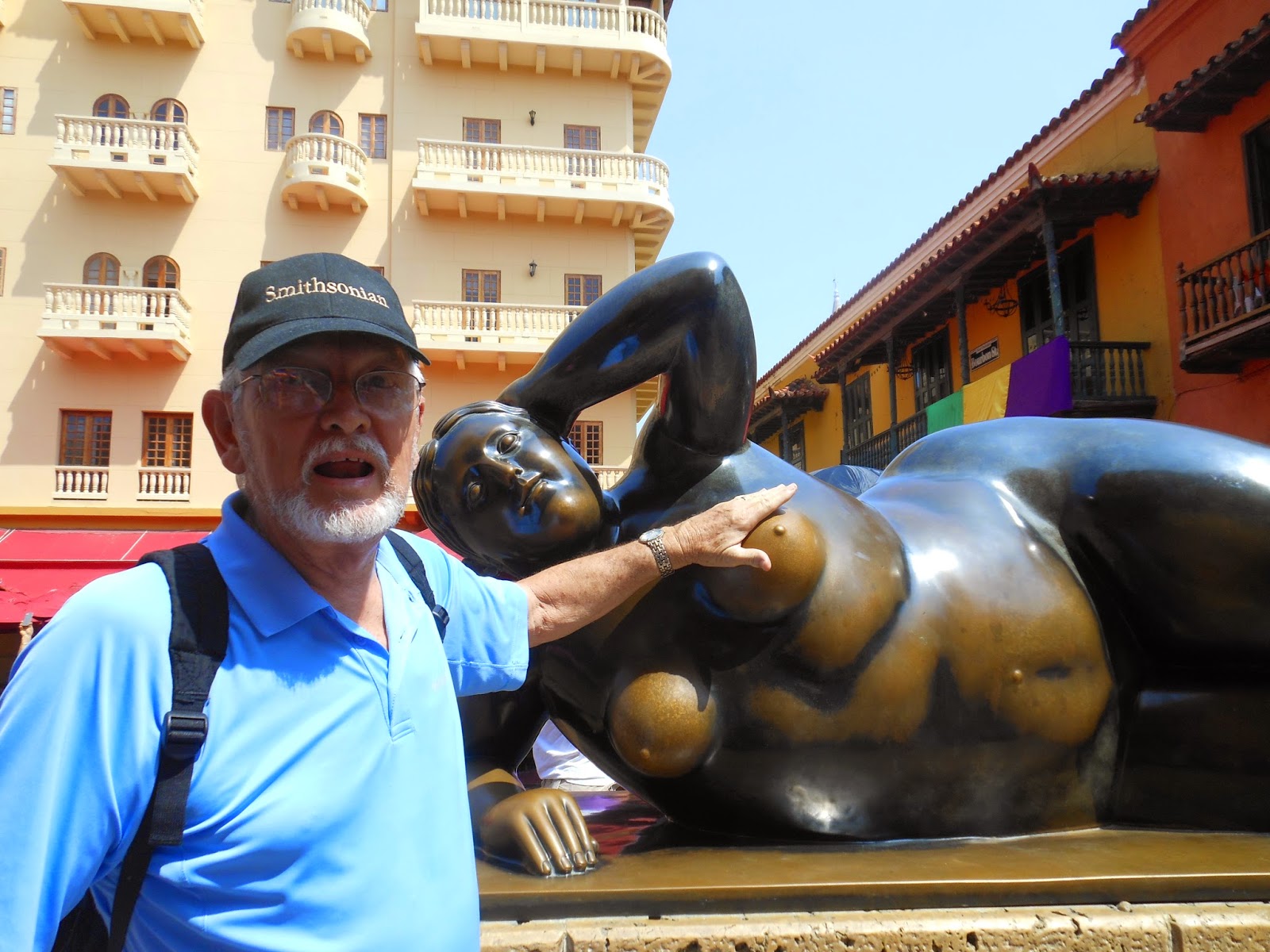 The Tourist Office was air conditioned and we spent some time in there to cool off before continuing to the Watch Tower and shops with all of the sweets.  Shari negotiated a great price on a very long strand of pearls in a craft shop while Jim enjoyed a very cold Pepsi; his first on the trip.

Soon we’d had enough and headed back through the streets towards the taxicab parking area.  There we spent some time on the wall that surrounds the old city.  It is broad enough that a car can drive along the top of it.  One of the ship tours is to walk all around the top of the wall.  But, by this time is was 2:30 pm and we were ready for air conditioning.   We found a new cab and were blessed with air conditioning that worked!   The traffic was busy but we enjoyed the ride in the cool car with a driver who spoke only Spanish but with Dave’s fractured Spanish we learned many details of the city.  We found his name was Jorge Washington Mendoza. 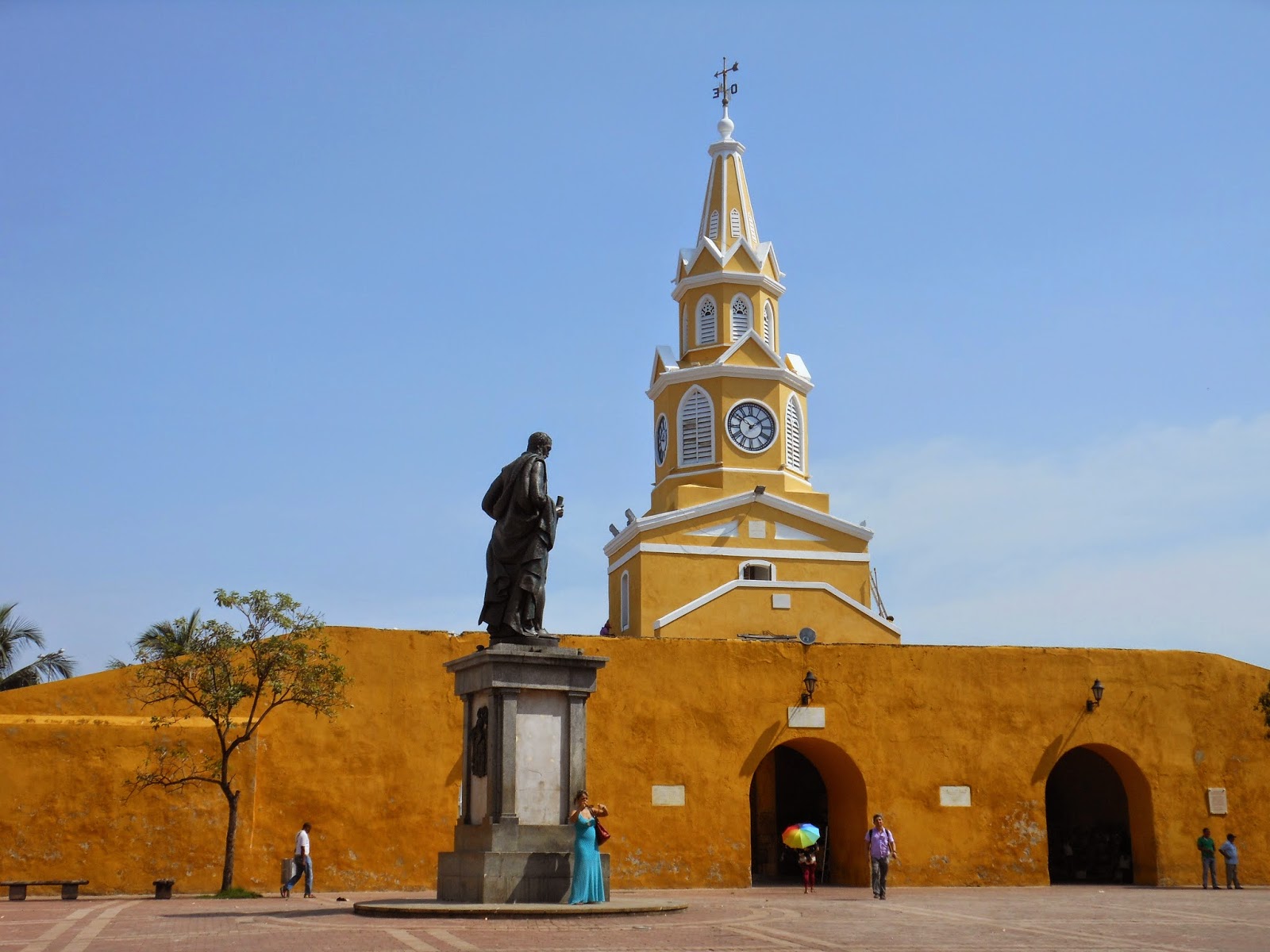 Back on the ship we headed for the hot tubs and salt water pools.  There we stayed until it was time to dress for dinner before Jim and I headed for our third tango lesson.  Afterwards we met in Dave and Shari’s room to share a glass of wine from the bottle that Dave purchased here on the ship after they went on sale at a discount, a Chilean Merlot.   We took out glasses and enjoyed a casual dinner in the Garden Café before Dave and Shari headed for the evening show and we went to listen to the Amber Duo in the Windjammer performing classical music.  A wonderful day in Columbia as we sailed out of the port about seven o’clock in the evening.
Thursday was a day at Sea as we headed towards Tampa and the final destination for many of our fellow cruise mates.   We’ll enjoy a day in port there on Sunday and then head out with new passengers to enjoy another week in the Caribbean. 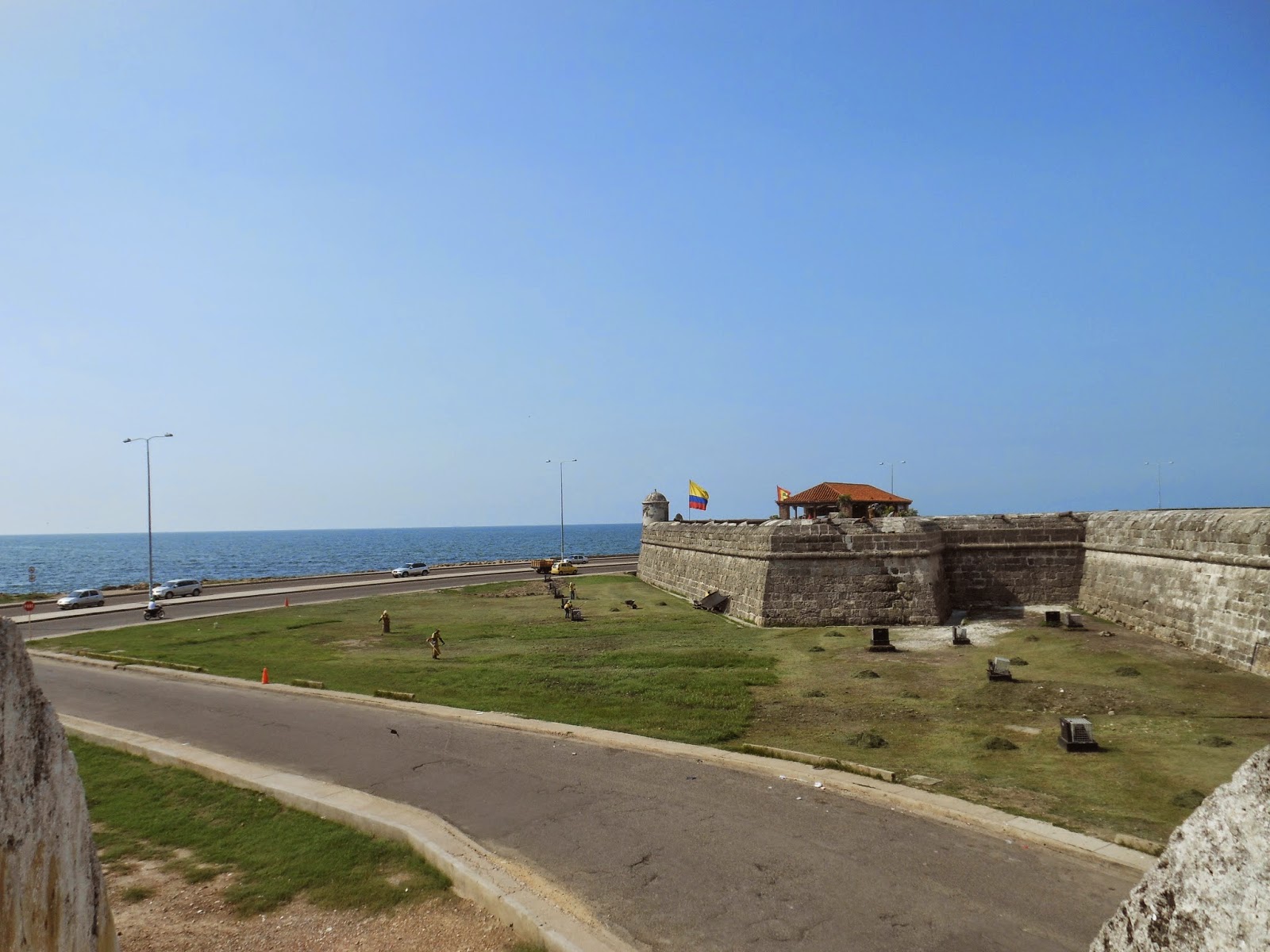 It was a fun day of cards, an hour with a wonderful comedian named David Naster who taught us the value of laughter during the toughest times.    We walked the decks, played cards and ended the evening after dinner with our first show:  Oh What A Night – A Tribute to Frankie Valli and The Four Seasons.   The group had arrived straight was Las Vegas while we were docked in Cartagena.    Beautiful voices and lots of fun.  We really enjoyed the show.

Today, Friday, is another day at sea.  We’re going to watch the film that they took during our Panama Canal crossing this morning and then probably more cards.


I will hopefully be able to make phone calls on Sunday while we are in Tampa to family; but if not…remember we love you all.  Thanks for sharing our journey.  More to come after we leave Tampa on Sunday.  Below I've finally pasted the slideshow for you; the first two photos are of the multitude of paintings that we on our deck; there are art auctions nearly every day.