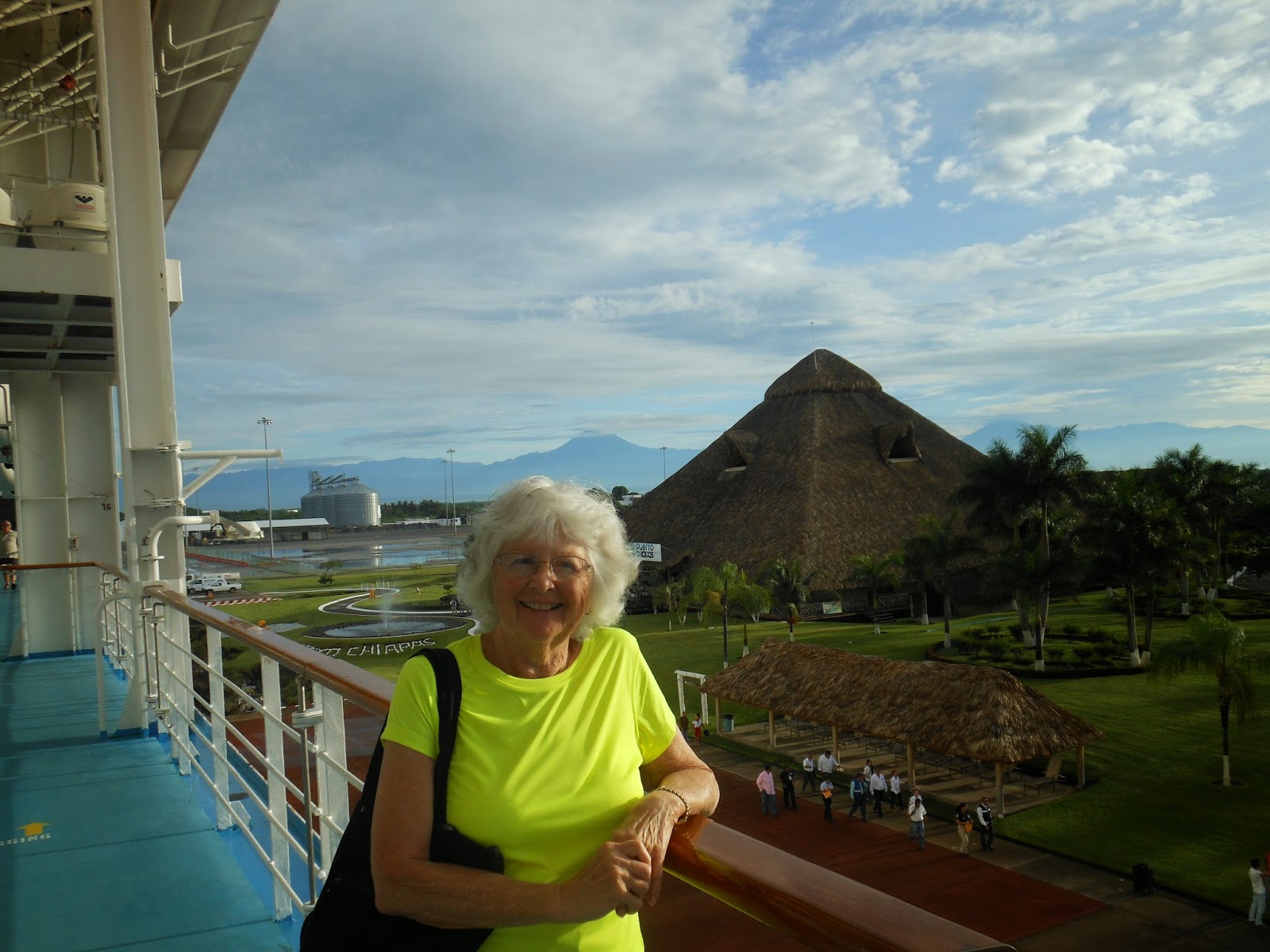 Our stop in Puerto Chiapas was uneventful except for constant rain and military gunboats in the bay where we spent the day.  Those that went into town by bus commented on the large number of machine gun carrying military personal but no unusual events.  There was a large grass roofed building in the port and the quality of shops inside was much better than in our last port.  There was a tiny Museum about King Pikal of Guatemala and Jim was delighted when he was able to negotiate a reduced price on a small leather wall hanging replica of the cover on his tomb or something like that.  They wanted $30 and Jim managed to get it for $20 which made his day!
We watched two different movies in the afternoon and then as we were leaving the port we watched a well dressed woman depart with three large pieces of luggage shortly after an ambulance pulled away from the ship.  Apparently another passenger had medical issues.  Can’t imagine being left in a strange country with medical issues.  But, it’s an issue that is always in the back of our minds as we continue to grow older and traveling becomes more fraught with possible problems.
We again enjoyed the various venues for music as the evening progressed and we turned our clocks back an hour…yes twice forward and now back an hour…as we headed for Costa Rica.
Saturday was spent on the high seas as we continued south along the coast.  The rain continued most of the morning but the covered deck allowed us to enjoy walking several miles in the fresh air.   We played four hands of our favorite card game…the boys against the girls and we got skunked by the guys!  But it was still fun. 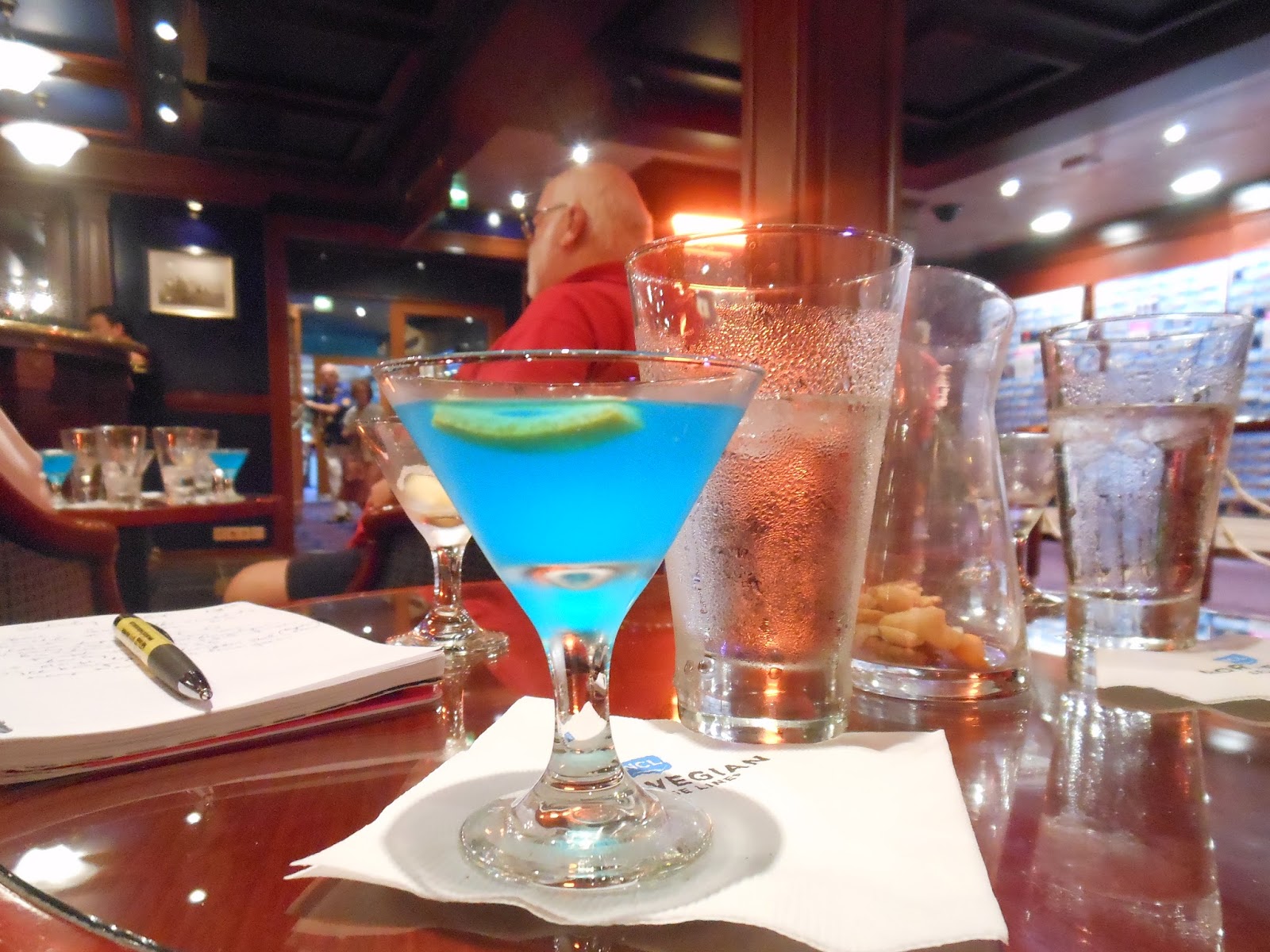 In the afternoon Dave and I enjoyed the Martini tasting hour; six different designer martinis.  Most had grey goose vodka but two were with gin and one was rum.  Added to these were various liquors to create different flavors:  The first was with Elderflower, the second was called Aviation with Bombay Gin and cream violet liquor.  Third was a Lemon Grove….like a lemon drop.  The fourth one was a Chambord base of raspberry liquor and the fifth one was called an Iceberg.  Gin with orange liquor bluegrass owl that gave it a pale blue color…my least favorite.  The sixth was with Rum…called a Rumcake.  The raspberry Chambord base again with Godiva Chocolate and heavy cream.  Yummy!

We really enjoyed our music after dinner this evening and then off to bed for an early start to our adventure in Costa Rica on Sunday.
Woke at 5 am anticipating our adventure.  It was nearly nine o’clock before we were on the bus and headed for the rain forest.  Predicted rain didn’t arrive until late in the evening.  But it was still very humid as they had torrential rain storms the night before!  We had a seventy-five minute bus ride (air conditioned) into the rain forest of Costa Rica.   During the ride our very knowledgeable guide gave us the history of his country and his family.  We stopped on one bridge and viewed the huge crocodiles sunning on the riverbank far below.   That was one of the excursions offered but I like ours much better. 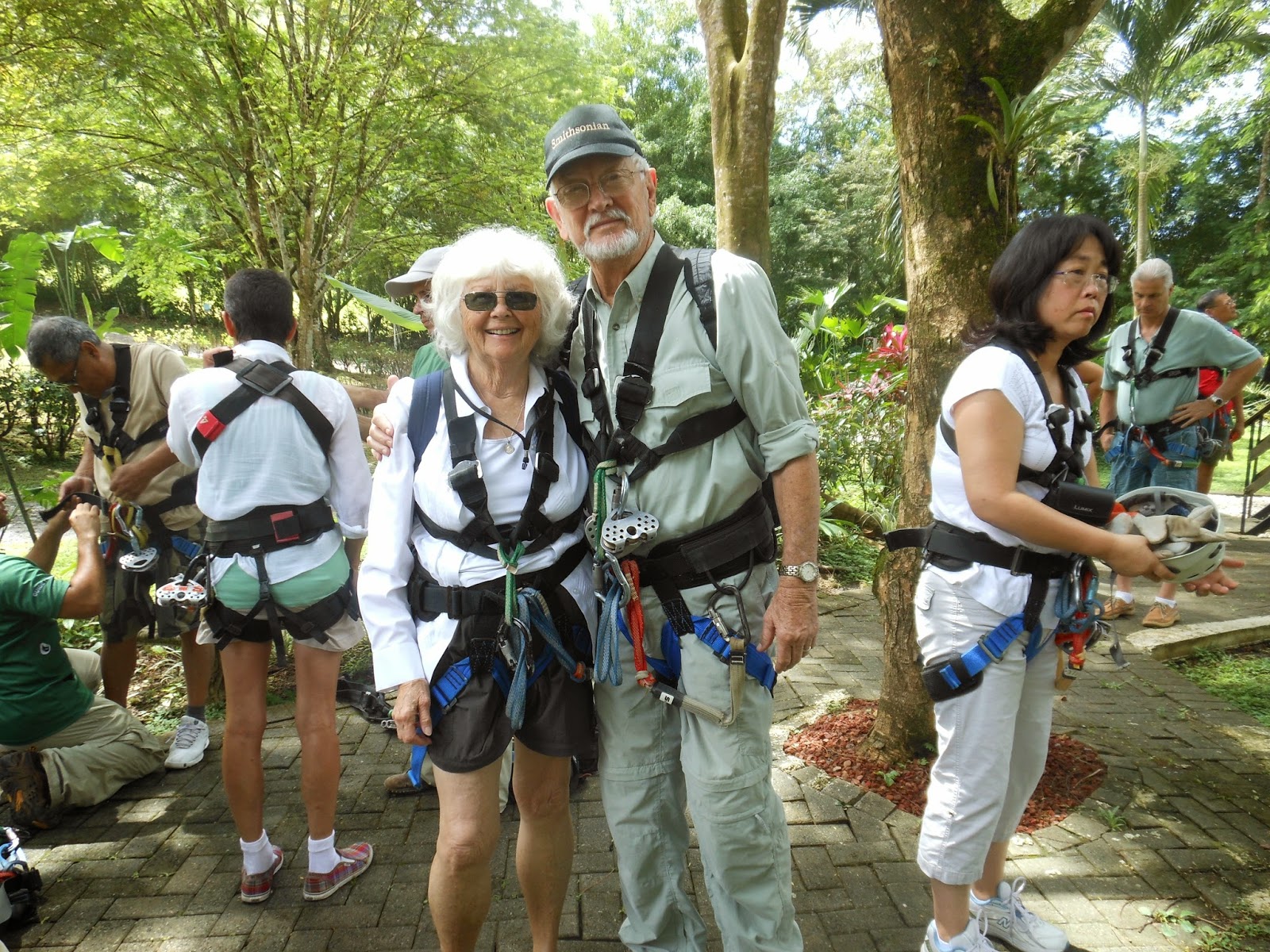 Shortly after ten we were high in the mountains and enjoying fabulous views.  We were each outfitted with a harness and helmet.  We were allowed to keep our backpacks and cameras.  So we did get some photos for you.  Shari had elected to pass on our adventure so it was just the three of us and about forty-five others.   We were divided into groups of eight for a ride in the Aerial Trams that skimmed the tree tops as we headed further up the mountain.  Far below we heard the rushing water and eventually saw the water falls gushing down the mountain.
At the top we started our decent by way of ten different cables, some as long as two hundred feet, that traversed from ridge to ridge giving us fabulous views of the valley far below and in the distance we could see the ocean.    It was an exciting experience spinning across the cable and occasionally twisting round and round.   The fun part was letting go of the cable and leaning back to enjoy the sense of freedom as you sped across the valley.
One of the hardest parts of the journey was the walk down to the base from the last platform.  Thank goodness we didn’t have rain as it would have really been tough if the path had also been muddy. Jim was suffering with his knees from the stress of the constant pounding on the down step.  We also had to be careful where we stepped and still watch for the occasional low branch that was ready to clip us in the head.   Along the way we were constantly entertained by the trail of ants that were carrying pieces of leaves to their nest to build their food preserves.  They are much larger ants than we have at home…nearly half an inch in length.  We were told that they were “farming” and are a very organized colony, each having their job to do.

Soon we were back at the base and enjoying a lovely lunch before a final tour of the gardens with glass enclosed cases along the way displaying various bugs and finally several with snakes.  One of the most fun plants was a tiny fern leaf that closes when you touch it.  We also found the coco tree and many other plants that are native to Costa Rica. 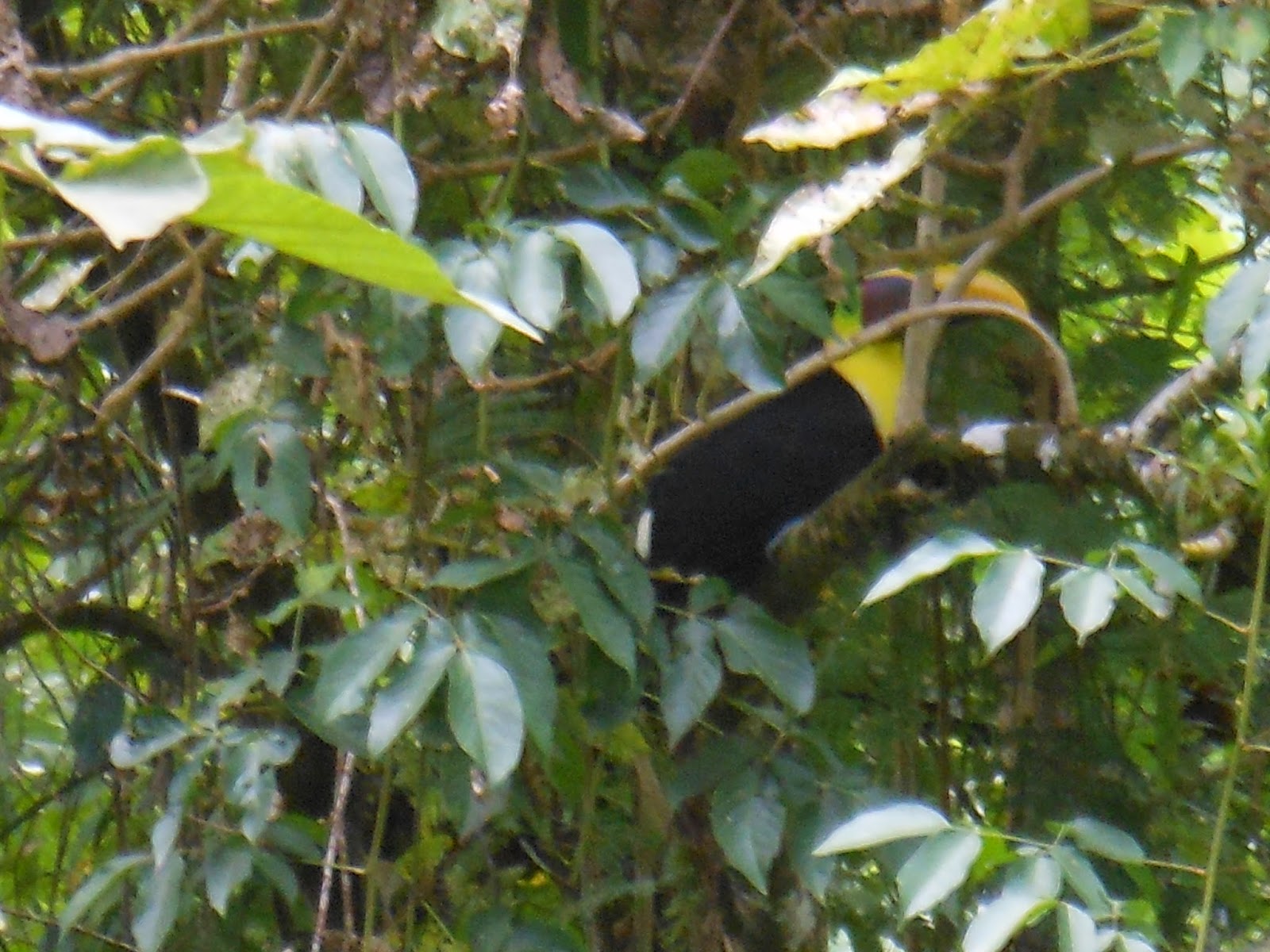 I did luck out and spotted a Toucan in the trees during lunch.  With the help of the long distance feature I was able to snap a photo of him hiding in the tree.  By three o’clock we were back on the bus for our ride back to the ship.  I enjoyed a short nap after the lecture was finished…yes he kept it short on the return and let us catch some zzzzz’s on the way home. 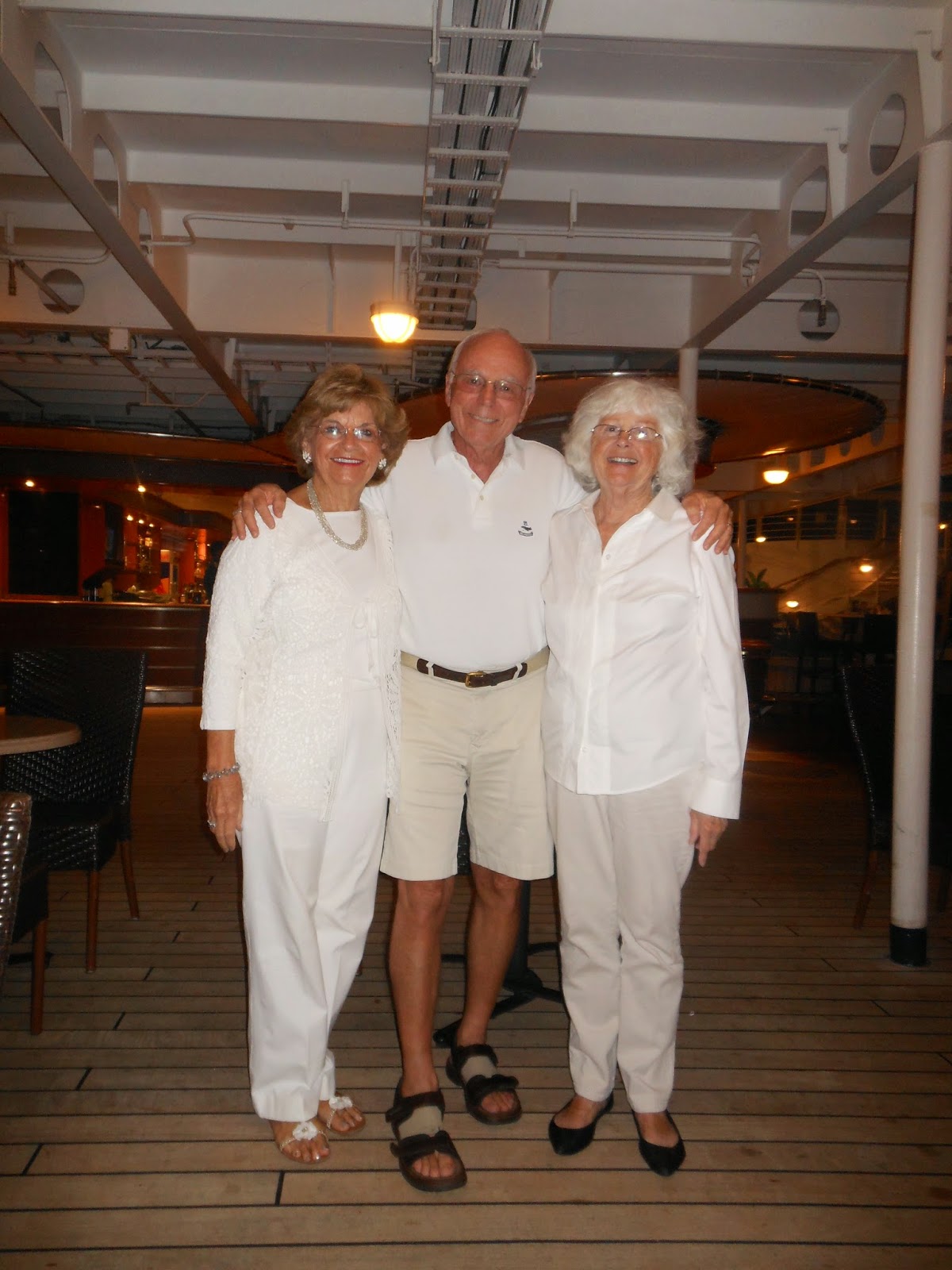 Our evening started with the hot tub to ease the pain out of our knees from the hike down the last stretch of the mountain…worked marvelously.  Soon we were showered and dressed in white for the “White Night” event planned for the evening.   After dinner we headed for the tango dance lessons…yes…we’re going to be getting an hour lesson every evening from now until we arrive in Tampa.  We’re going to give it a try!   And we also enjoyed more dancing tonight than since we left Los Angeles!  We gained another hour this evening as we moved our clocks forward before turning off the lights which made it about 11 pm.


Thanks for joining us for our adventure today, another day at sea tomorrow and then we arrive in the Panama Canal.

Below you will find the slideshow for both our visit to Puerto Chiapas, Mexico and the following day at Sea.  The final photos are from our day in Puntarenas, Costa Rica where we enjoyed the adventure on  the Zipline.