Our evening in Paris…. 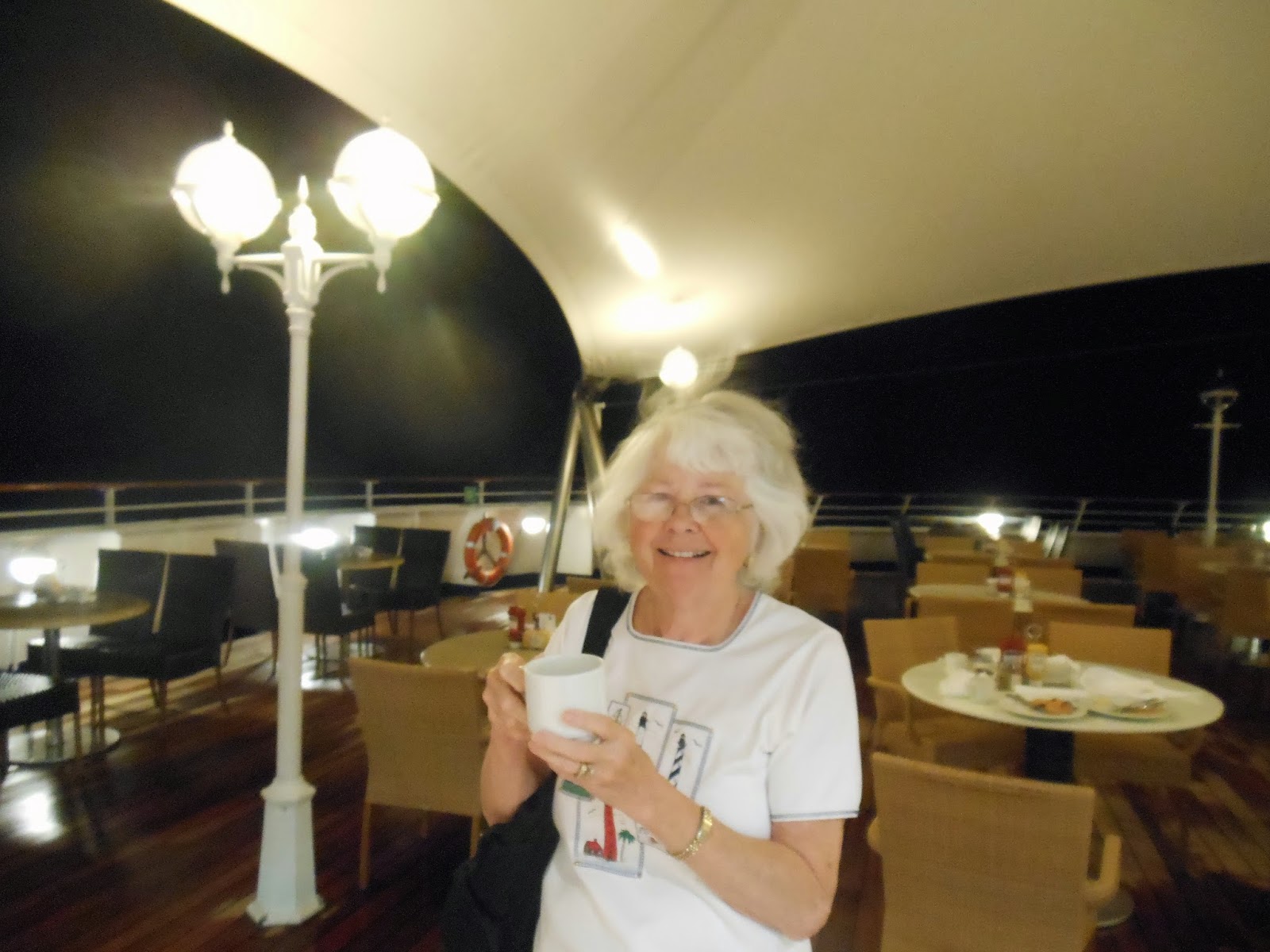 Monday I experimented with the Internet; as expected it is slow.   Took me eight minutes to post the short blog with only four photos yesterday.   But we did get out and walk the jogging deck for two miles plus I did another mile with Shari in the late afternoon.  Feels good to stretch the muscles.  We’re experiencing gentle rolls which are just enough to remind us that we are on a cruise!
In the afternoon we spent two hours around a table learning how to play the card game of Hand and Foot.  It takes five decks of cards and lots of cooperation with a partner.  Shari and Jim won three of the four hands but Dave and I held our heads high and promised another round on another day!  Lots of fun even for Mr. Jim who is not a card player.  Maybe it’s because they won?
We enjoyed some of our free time during the day on three different occasions by relaxing in the Atrium to the lovely sounds of two different musical groups:  a viola and classical guitar and the second group was a violin, viola and cello.   They rotate throughout the day from eleven in the morning until eleven at night. 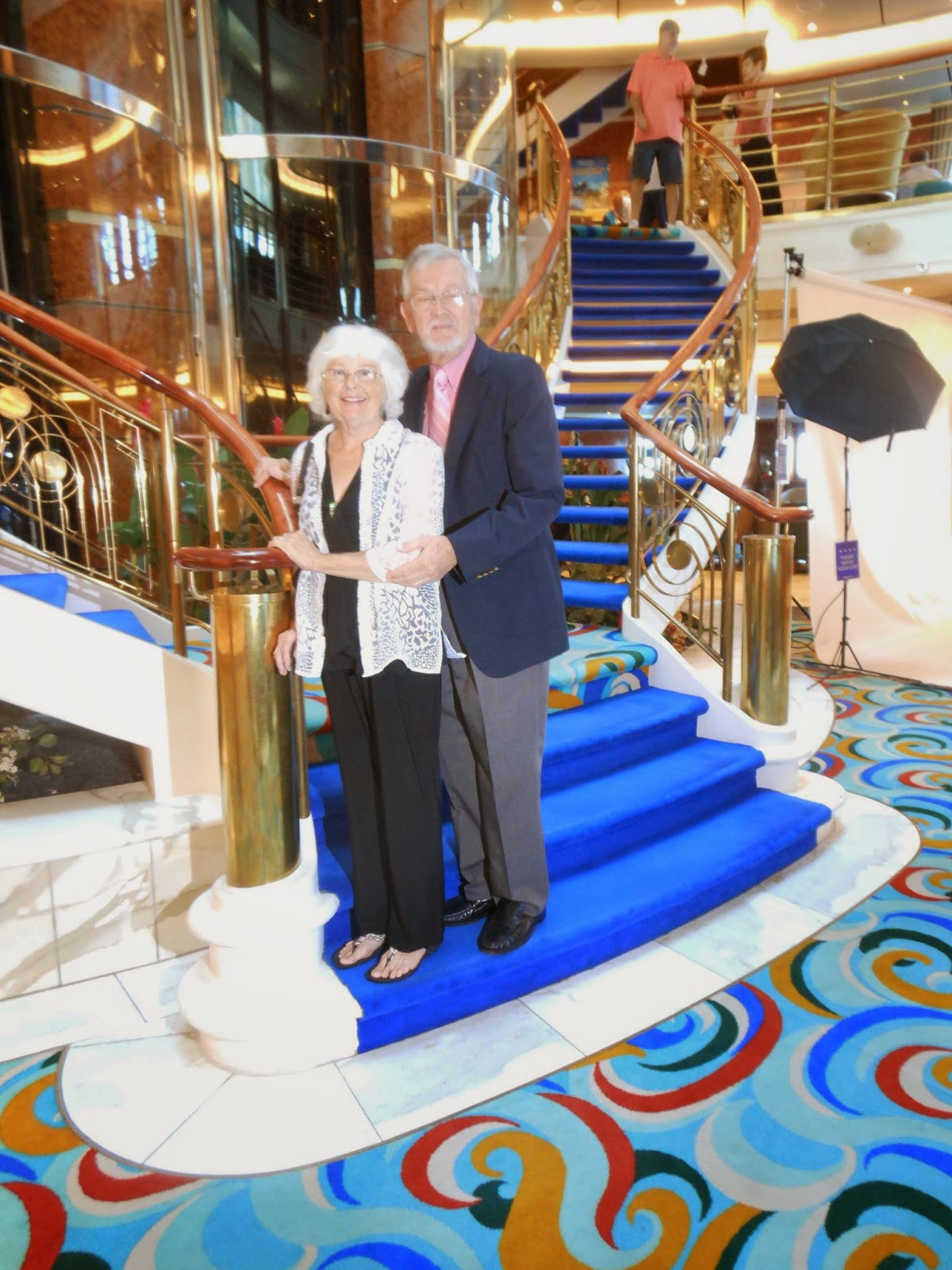 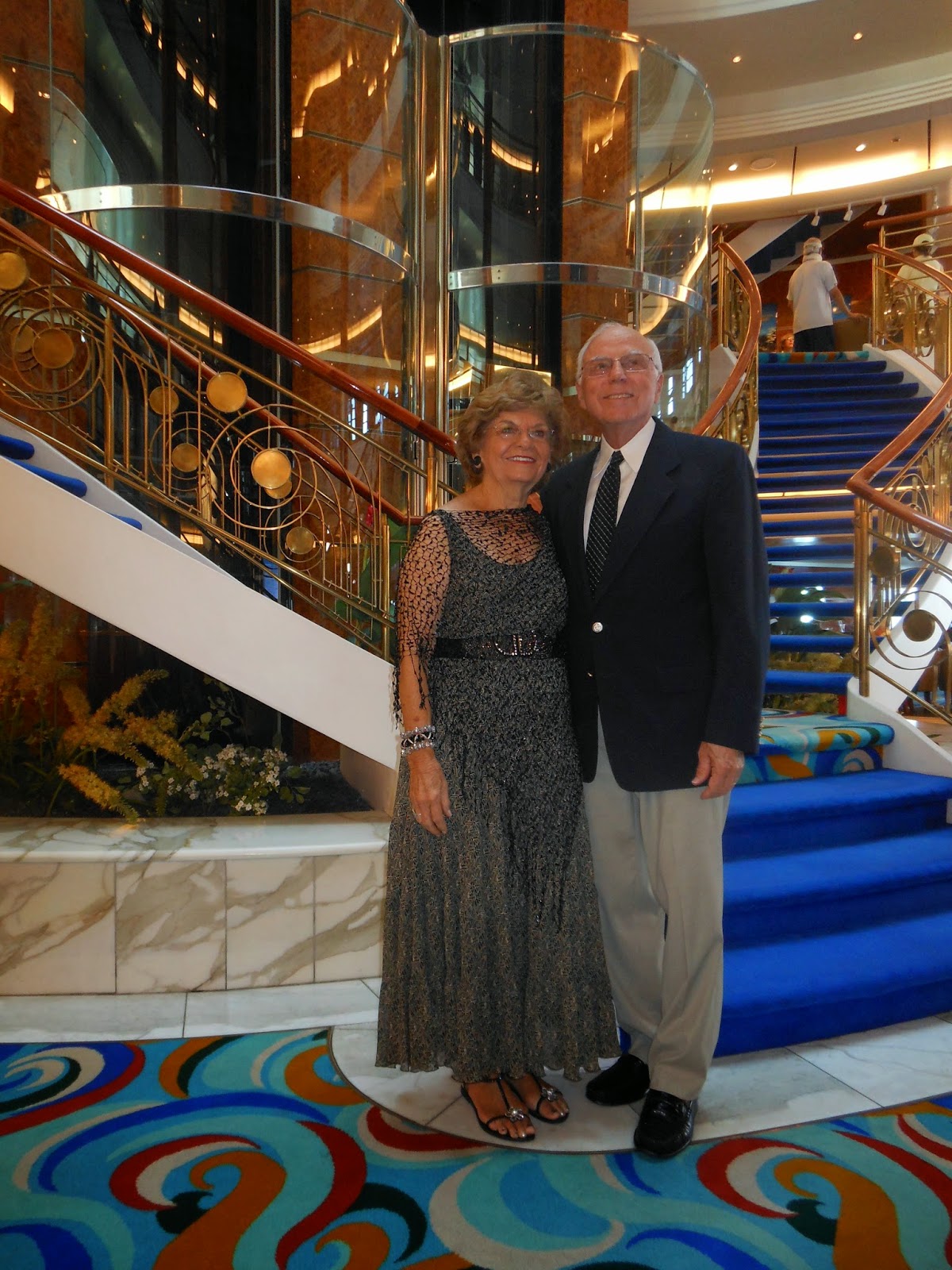 At 4 pm we retired to our rooms to dress up for the evening.  An hour of music from five to six and then up to the twelfth deck to the French Restaurant called Le Bistro for a fabulous French dinner as good as any you’d find in Paris.  There are six specialty restaurants on the ship that charge a cover charge ranging from $15 to $30. Per person; but well worth the dollars.   There are three other large restaurants that are included in the price of the cruise.  We started our meal with a Kir Royale and then enjoyed a three course dinner of French cuisine including duck for Mr. Jim.  Across the dining room sat 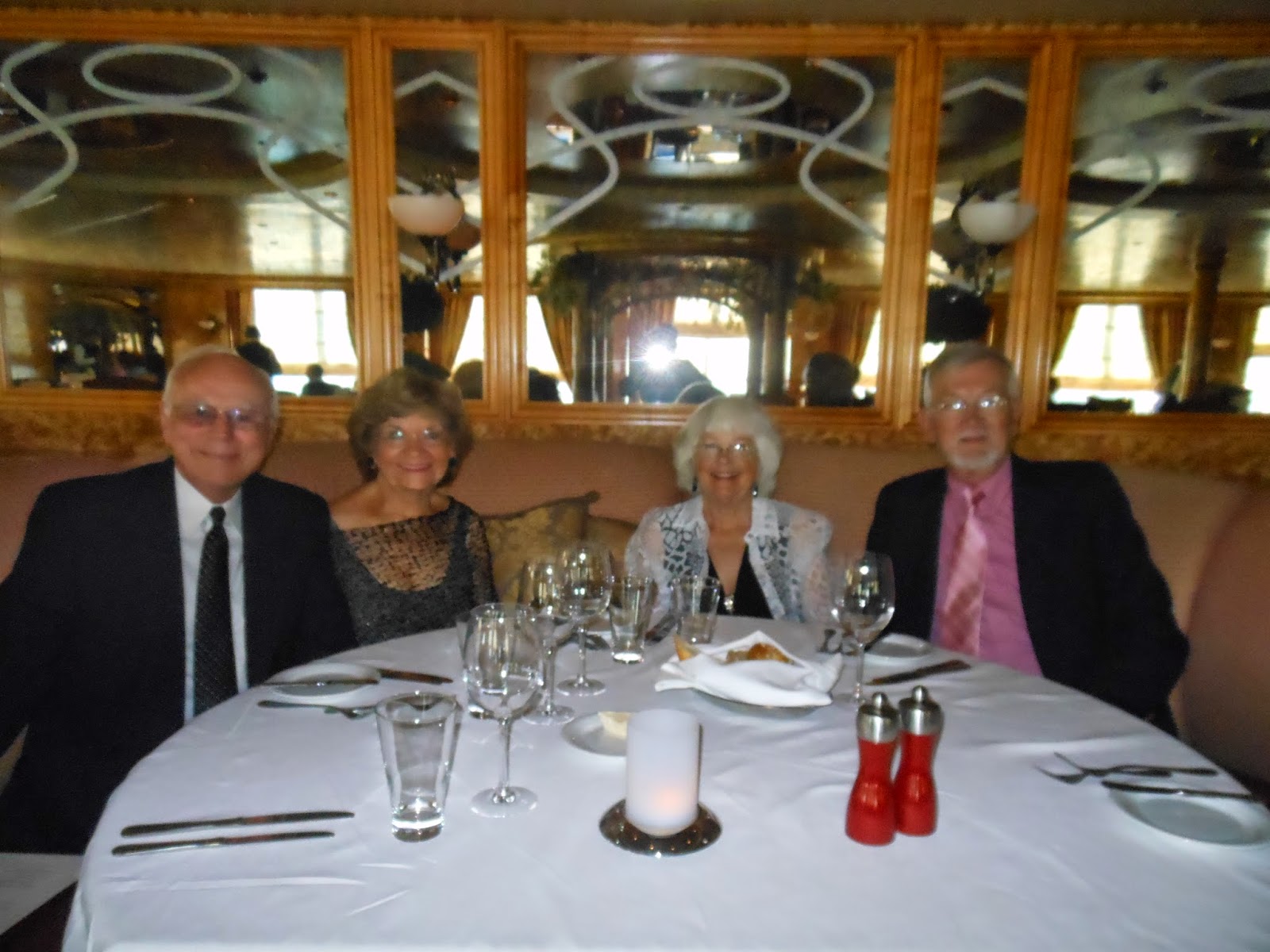 tablemates from the wine tasting the day before and she delighted in sending me over a plate of goat cheese as I’d chided her during the wine tasting about acquiring a taste for cheese when she had aged a bit….yes, she is a beautiful young thing now.  Turned out it wasn’t the taste for her but the fact that she has a reaction to many cheeses.  We went to visit with them after the meal as we enjoyed the sunset.  Then back to the lobby to enjoy another round of music before heading off to bed.

Tuesday morning we awoke in the port of Puerto Vallarta.  Walked a mile by myself and by ten we met Dave and Shari to walk around the port.  Turns out there is a huge new shopping mall within walking distance of the port and also a Super Walmart. We enjoyed both and found insulated coffee cups at Walmart for only $4.00 each to use in the morning to bring hot coffee back to the room early in the morning.  The exchange rate is very reasonable and we were able to pay with USA Dollars but if you needed change it was in Pesos.
Hard liquor was for sale at the port but if you purchased it; they took it at the ship and it would be returned to you just before your final trip off the ship. 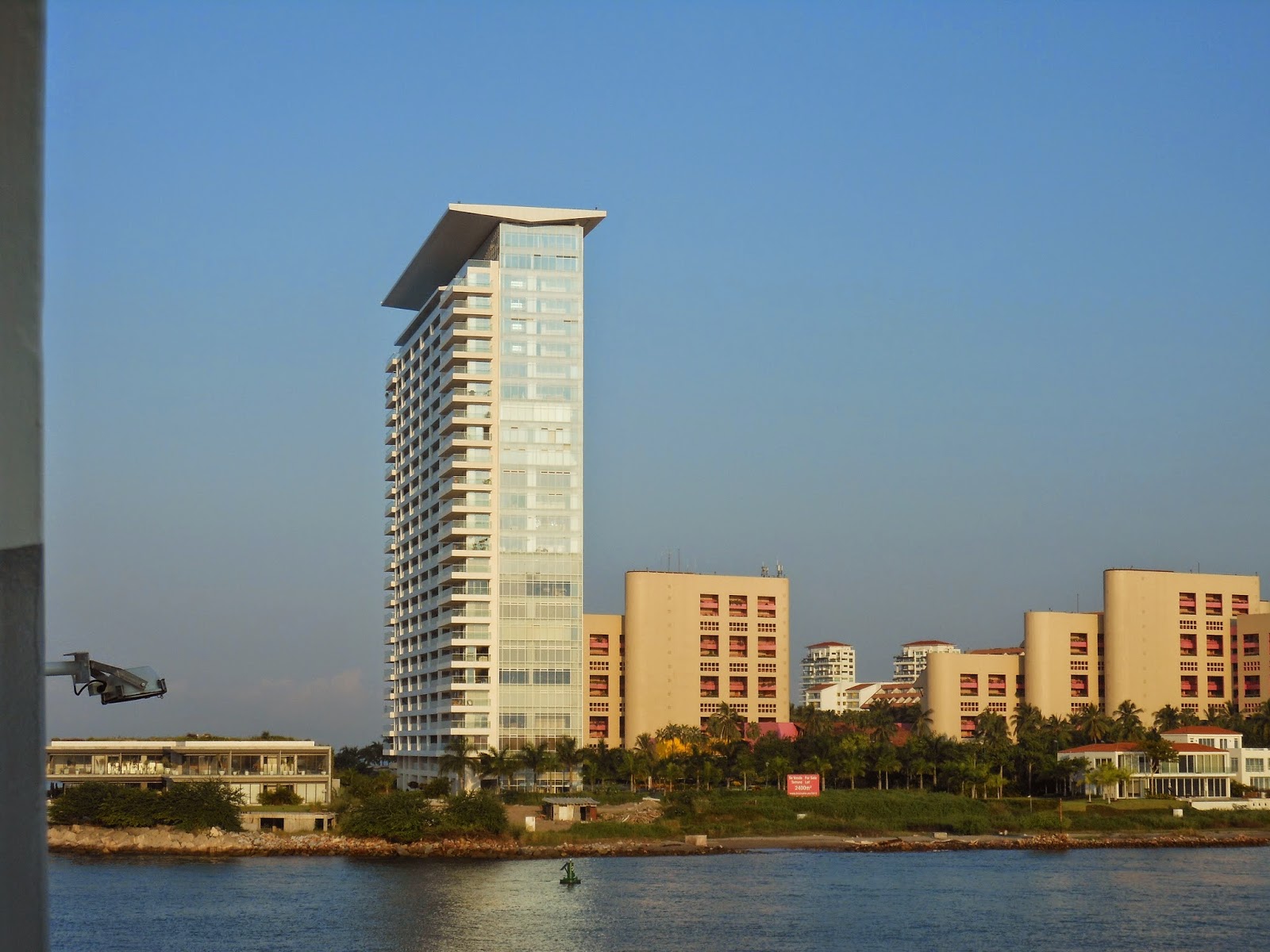 They want you to drink their liquor!

Jim stopped at the Pharmacy in the port for something for his back pain???   Says it’s helping??
We walked on the ship and went straight to the Dazzle Bar where they showed us a very new movie called “Transcendence” with Johnny Depp.  Good movie.  After enjoying lunch in the Garden Café Shari did her crafts, Jim watched another movie in the room and Dave and I went to the hot tubs at the pool for a relaxing time that also relaxed the muscles.
Tonight we’re headed to the casual dining room called Four Seasons which allows dress shorts for the men instead of long pants required in the other dining rooms for dinner.  But first, a drink and then some music and dinner at seven as we ate a late lunch.
Closing for now and will send this tomorrow just in case there is any exciting news to add, it’s a day at sea so we’ll have more free time.  Maybe Bingo and definitely more Hand and Foot card games.


Thanks for taking time to enjoy sharing our journey.  Here is a slideshow of today that I'm posting from Florida on November 6th.