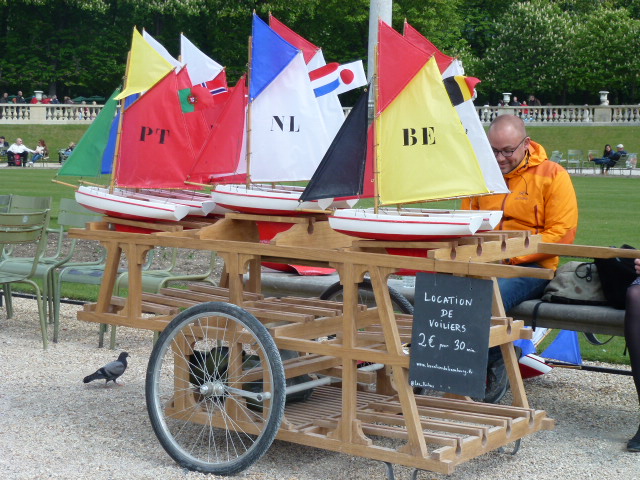 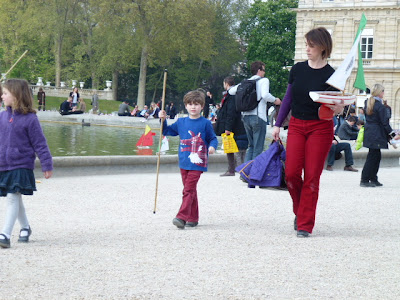 We always enjoy visiting the large fountain in the northern end of Luxembourg Gardens when in Paris.  On April 14th we arrived mid-day and were rewarded with the children sailing their boats that they rented from the vendor.  They control the boat using a long pole to push it out and the fountain in the center continues to push it back to various areas of the fountain as the children run to follow their boats.  It was a cool day with welcome sunshine and this was a good reason to pull up the ever present green chairs and rest our feet while we watched the children.
Posted by Martha at 6:56 PM No comments:

The Metro Late at Night 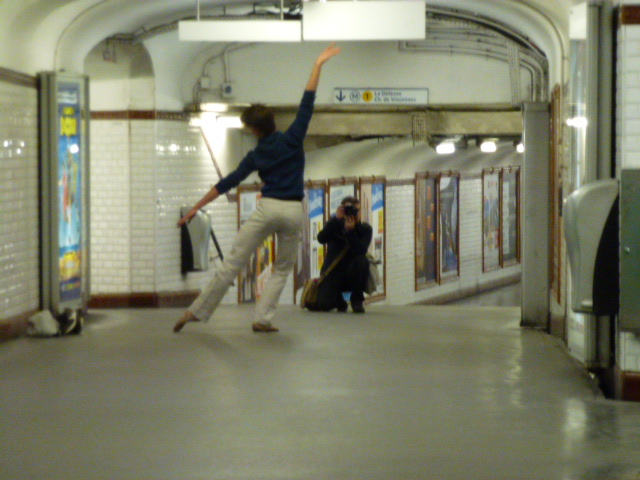 On  Sunday evening, April 15th, we dressed in our best outfits and rode the Metro to Notre Dame for an evening mass.  Then we caught the Metro over to the Lourve area and enjoyed a special treat:  drinks at the five star Hotel Le Meurice on rue de Rivoli.  We were greeted graciously by the doorman and entered the Bar 228, a favorite of Hemingway when he was in Paris.  We each enjoyed a kir served with a dish of several different snacks while we enjoyed the jazz musicians that play in the bar nightly.   On our way home by Metro that evening...probably about 10 pm...we heard music but no musicians...only a photographer and a ballet dancer.  We stayed and watched his performance; we applauded at the end and he turned and thanked us.   Paris continues to surprise us....
Posted by Martha at 11:11 AM No comments: 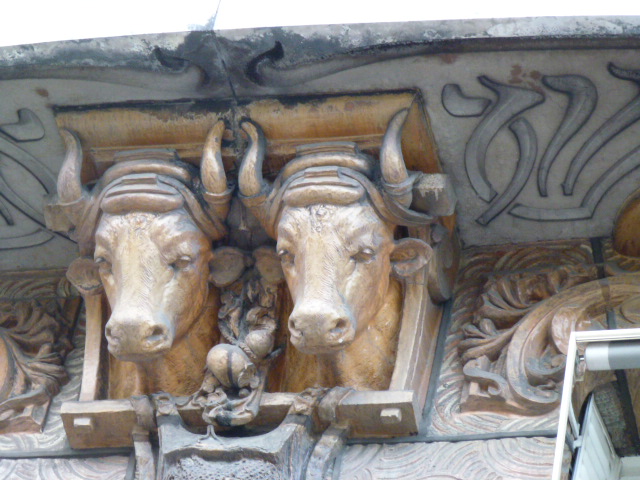 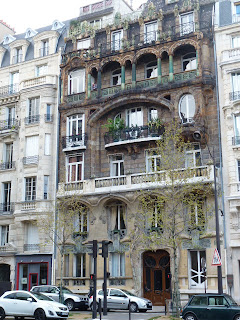 On April 12th, Jim and I went searching for this building near the Eiffel Tower in the 7th arrondissement at 29 Avuene Rapp.  It was built by Lavirotte & Bigot in 1901 during the Art-Nouveau Period (1890-1914).

During the late 1800s, many European artists, graphic designers, and architects rebelled against formal, classical approaches to design. They believed that the greatest beauty could be found in nature. Organic (living creatures and plants) were used to decorate the outsides of buildings.  You'll find the "cows" under the center balcony.  The "woman" is over the front door.
Art Nouveau (French for "New Style") flourished in major European cities between 1890 and 1914.  In the United States, Art Nouveau ideas were expressed in the work of Louis Comfort Tiffany, Louis Sullivan, and Frank Lloyd Wright.


In the later half of the twentieth century, Modernist architects took the concept of organic architecture to new heights. By using new forms of concrete and cantilever trusses, architects could create swooping arches without visible beams or pillars. 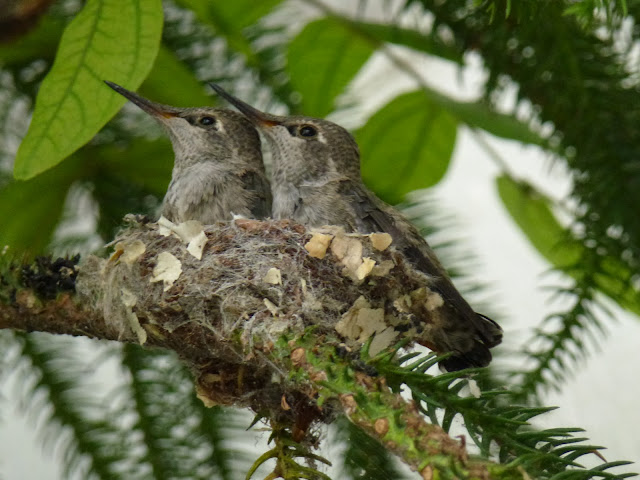 These are baby hummingbirds...not in Paris...but here in our yard in California!  They are hours from taking their first flight and as you can see ... scared to death!  They've outgrown their nest and mom is sure to push them out to fend for themselves soon!  They are giving me the evil eye as I snap these photos...wondering where in the "h...." is mama when we need her!  Enjoy this slice of life.
Posted by Martha at 7:41 PM No comments: 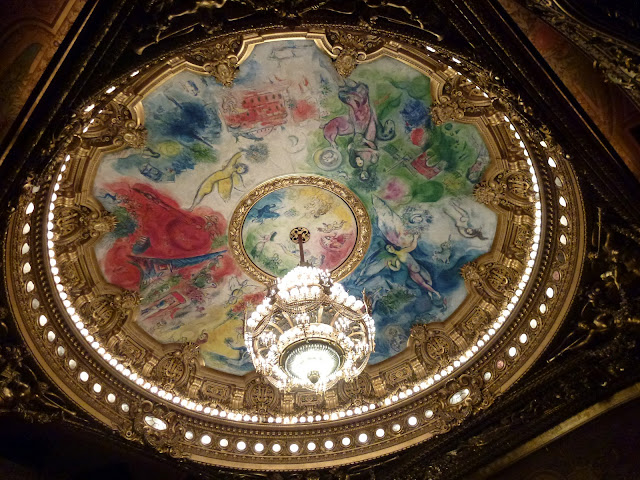 Feast your eyes on this magnificent ceiling that was painted by Marc Chagall in 1964.  We found this in Pari's Opera Garnier that was opened in 1875; designed by Charles Garnier and built by Haussmann for the Opera Company started by King Louis XIV in 1669.  There was seating for 2,000 people.  On April 19th we toured the inside of the building; what a thrill to actually sit in a seat under this ceiling.  Originally used for both opera and ballet performances; the building has been used for ballet performances primarily since the new Opera Bastille was completed in 1989.  Add this to your must see list when in Paris.
Posted by Martha at 8:09 PM No comments: 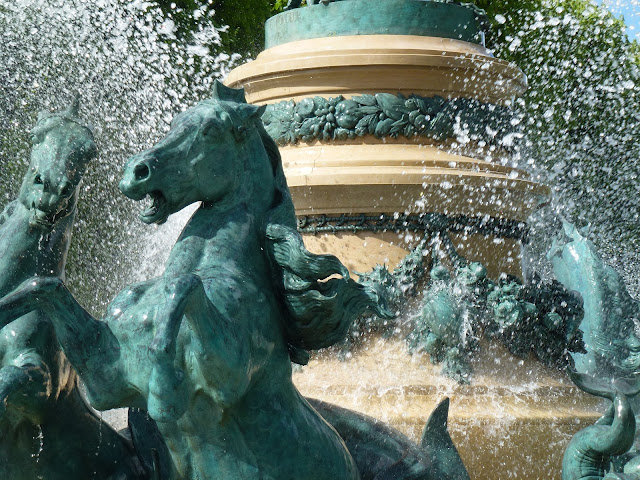 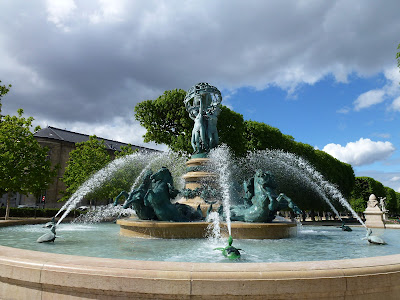 In the afternoon of April 11th we found this magnificent horse as part of the Fontaine de Obsevatorie in the southern end of the Jarden du Luxembourg.  The park is located in the 6th arrondissement of Paris.  The fountain's centerpiece represents the four parts of the world represented by four women holding a globe.  The sculptor was Jean-Baptiste Carpeaux in 1874.  Those are turtles sending streams of water  towards the horses.
Posted by Martha at 8:10 AM No comments: 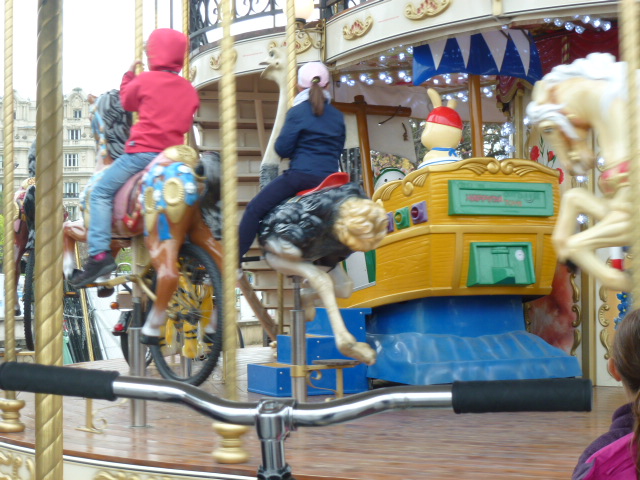 Posted by Martha at 9:30 PM No comments: 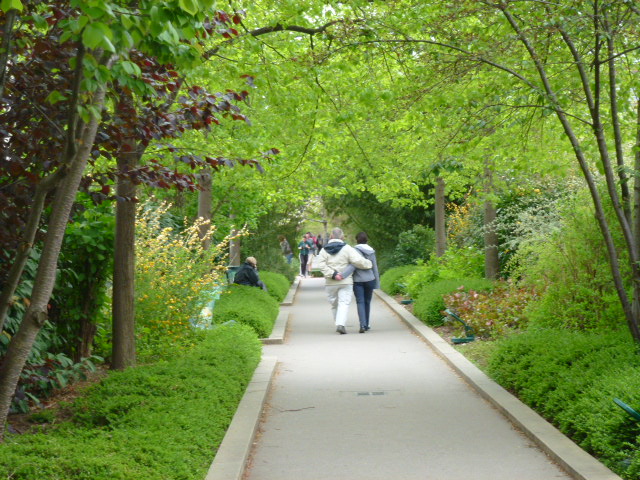 On April 9th we took the Metro to the Bastille Station, walked past the Opera de Paris Bastille and found the stairway up to the Promenade Plantee or as the french call it:  Coulee verte...the green course.
This is a nearly three mile walking trail created along the path of an old train line that cut through the center of the 12th arrondissement from the Bastille towards the Bois de Vincennes, a very large park just outside the peripherique.  Much of it is elevated and has views of the city on both sides of the trail. 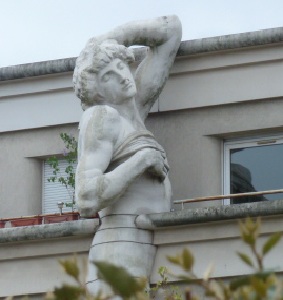 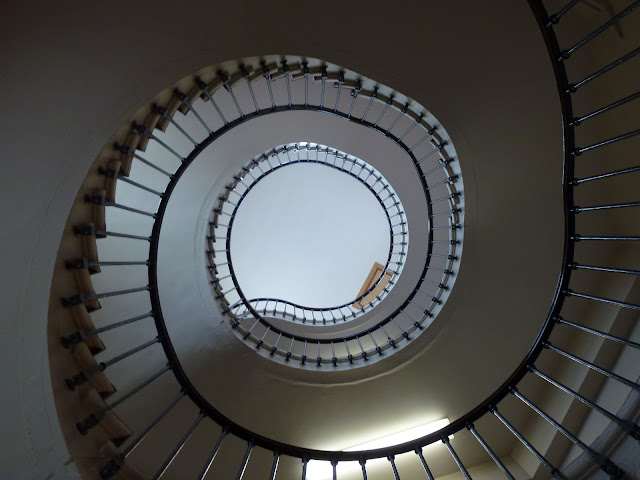 On April 11th we toured the "Val-de-Grace" in the 5th arrondissement where I discovered this fun photo of a spiraling staircase.  "Val-de-Grace" is a Military Hospital and also a Museum for the Military Medical History.  At one time it was an Abbey and part of our tour included a magnificent church that is only accessible to the public through the Museum.   It is located very close to Luxembourg Gardens and easy to visit.   A photo of the ceiling in the church is found below.  This was my day to enjoy looking up! 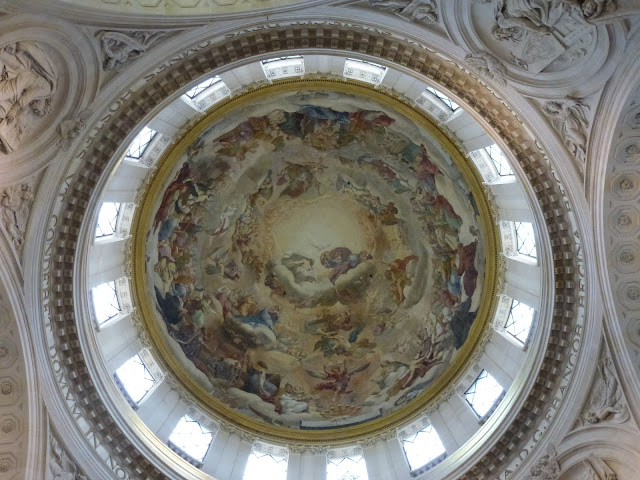 Posted by Martha at 8:12 PM No comments: 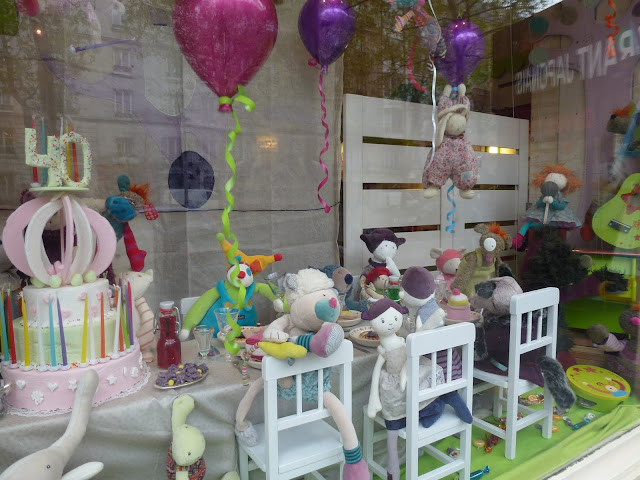 This photo of an "Alice In Wonderland" tea party store display was taken during Easter Week
Posted by Martha at 3:02 PM No comments: 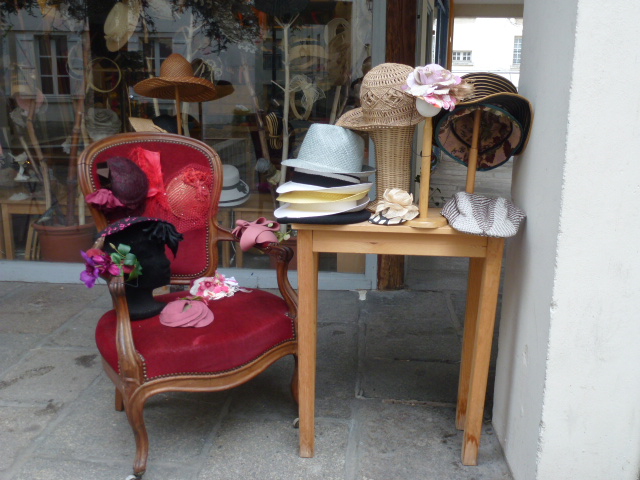 Loved this little Chapeau shop in the St. Paul's Villages!  Tucked off the street in a secluded square off of Rue St. Paul; I couldn't resist snapping a photo on the morning of April 4th as we discovered new areas.
Posted by Martha at 7:23 PM No comments: 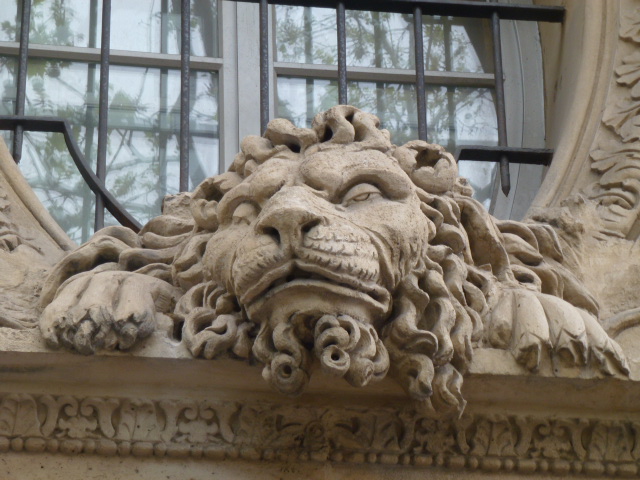 On April 4th I spotted this sleepy lion guarding two red doors.   We'd just left the Bastille Memorial in the park at the corner of Blvd Henri IV and Quai Henri IV...heading towards St. Paul's Village.
Posted by Martha at 8:24 AM No comments:

Our group at the Arc de Triomphe 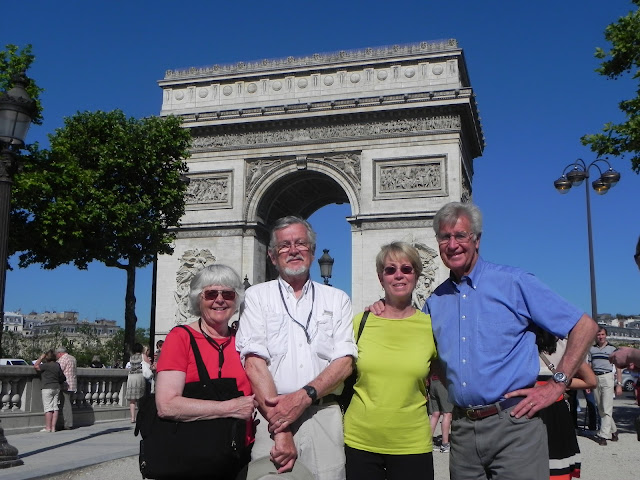 Yes...I'm still in the USA but I do miss blogging; so thought I'd start posting a photo every few days that you might enjoy from our recent trip to France.  This was taken on Terry's camera by a passing tourist!
Posted by Martha at 4:56 PM No comments: