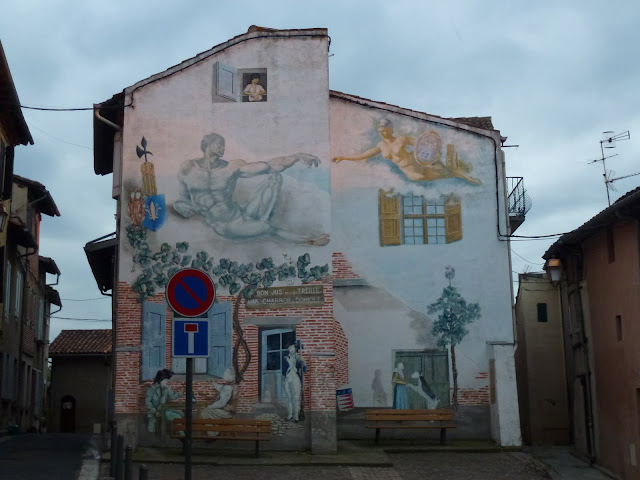 One of my favorite photos taken in Albi; the decorative painting on the blank wall of a house we found on an evening walk through the town.
This ancient town dates back to the Bronze Age (3000-600 BC) and today is famous for several things including the Museum of Toulouse-Lautrec and the Sainte Cecile Cathedral; two of the most important sites.  Red brick is the main feature of most of the buildings and is known as the Languedoc-style red brick construction.

The cathedral is a masterpiece of the Southern Gothic style, built between the 13th and 15th centuries as a statement of Christian faith after the upheavals of the Cathar heresy.  It is characterised by a strong contrast between its austere, defensive exterior and its beautiful interior decorations.

The Toulouse-Lautrec Museum has more than 1000 works and is the largest public collection in the world devote to Toulouse-Lautrec who was born in this city in 1864.  It is housed near the cathedral in the former Bishops' Palace which is older than the Palace of the Popes in Avignon.

Posted by Martha at 7:34 AM No comments:

The Walled City of Carcassonne 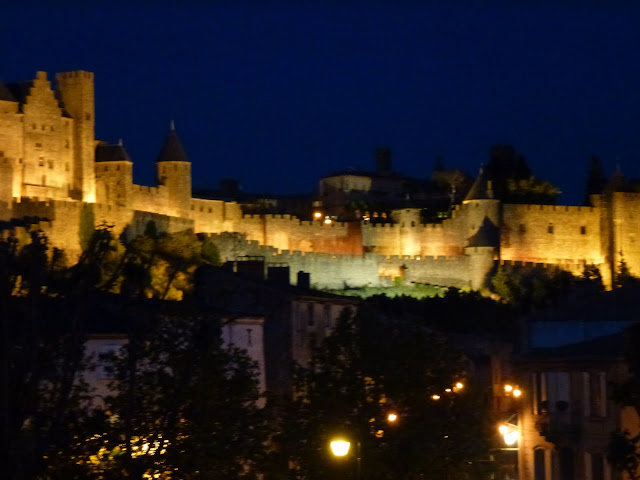 A view of the walls at night from the old bridge that leads into the modern town.   Carcassonne is completely encircled by an ancient wall that dates back beyond the fifth century.  A stronghold of the Cathars in the twelfth century; it was restored in 1853.   Today it is primarily a tourist attraction.  We stayed right outside the walls in an Abbey that is located across the road from the main gate on our last trip.  There are some wonderful hotels located inside of the gates; we stayed in the Best Western back in 2004 on a trip.  It's a magical experience to wander the deserted streets at night. 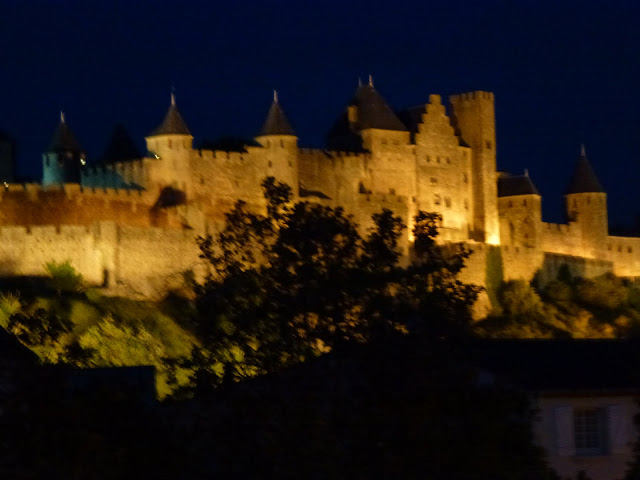 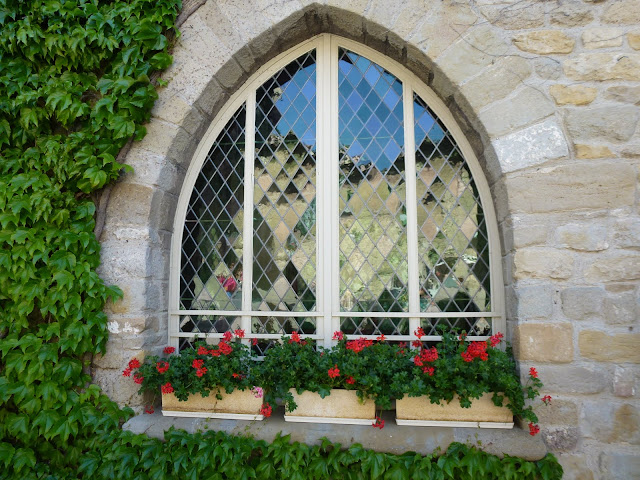 One of my favorite photos in Carcassonne; a window near the church inside the walled city.
Posted by Martha at 9:56 PM No comments: Our recent visit to the village of Collioure on the Mediterranean in the South of France was a breath of fresh air during our trip last spring.  A haven for artists we enjoyed our few nights in the Hoterl des Templiers overlooking the port.  This hotel has over 2000 original works of art, including a small drawing by Picasso over the bar. 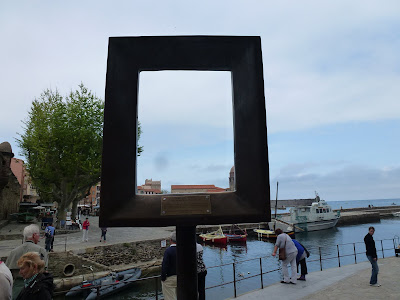 Around the port you will find metal frames that "frame" a scene perfect for painting.  Here is one that frames the port and the church....I've given you several views so that you can see how well it works.

And then below is an artist actually painting the scene.  Enjoy.... 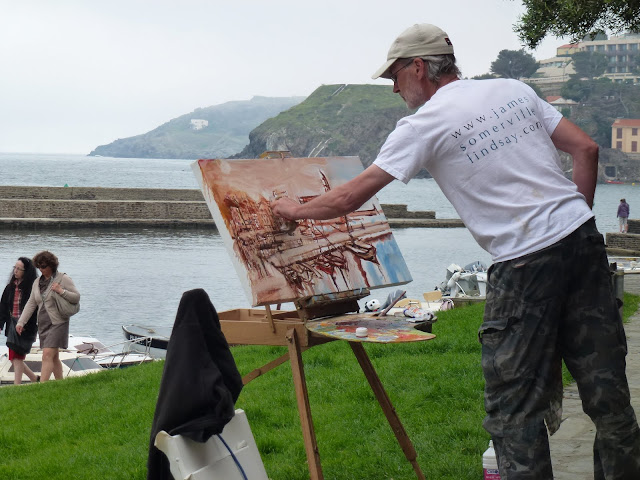 Posted by Martha at 8:49 AM No comments: 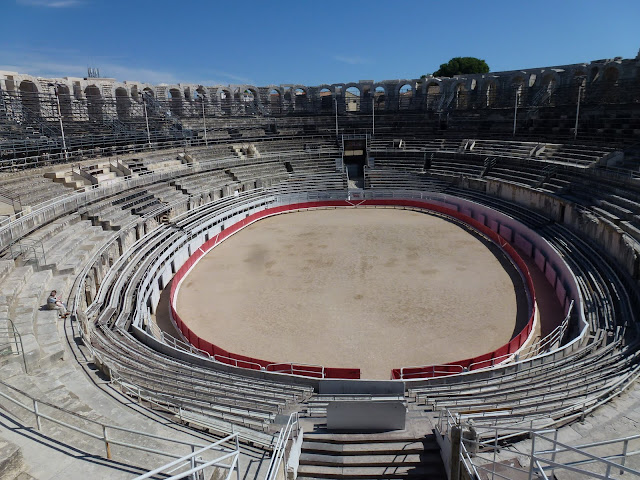 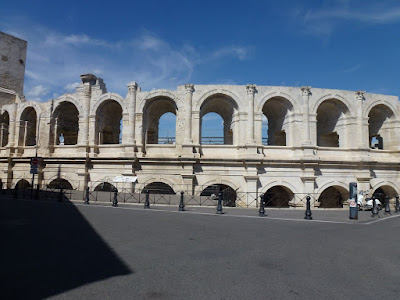 The Roman Arena in Arles is one of the best preserved site in France and is still in use today.  Built by the Romans in 90 AD for chariot races and bloody hand to hand battles, it held 20,000 spectators.

During the fifth century it became a town as 200 houses and 2 churches were built inside of the arena.

In 1826 the buildings were removed and it was restored to the present condition that we see it in today.

It now seats 13,000 people and is used primarily for the Camargue Bull Games, concerts and plays.  The Camargue Bull Games run from April through August each year.  Instead of killing the bulls, the participants are dressed in all white and attempt to remove a ribbon, flower or some type of ornament  that has been attached to a bull's head.  As you can see, much of the arena is below street level as the town of Arles has built up around the arena over the centuries.
There are several other Roman sites in the city of Arles.  Vincent van Gogh painted here for several years and you can visit the sites of his famous paintings.  The town is small enough that you can walk everywhere.
Posted by Martha at 7:36 AM No comments:

I'm slowing feeling guilty about not posting in my blog; so will start next week with posting more of my photos from the spring trip to France.  For now I've been very busy attending classes at our local university that are designed for Senior Citizens; no homework, no stress, just enjoy the opportunity to learn new things.  I've spent most of my time in classes on android cell phones...yes...I'm entering the smart phone world and love all of it.  I'm taking several different writing classes.  For one of them I'm working on my travel blog from my 2009 trip with my twin sister to "clean" it up for a book someday.  I'm sitting in on Lectures about European Art, and my favorite are my two classes a week on French.  Little by little I learn new words and phrases.  Still haven't mastered the art of conjugating verbs; concentrating more on phrases that I can use when I'm in France.

We're also planning a new trip in the fall of 2013; Jim and I will go to St. Petersburg, Russia at the beginning of the trip and then do several major Eastern Europe Cities (Berlin, Prague, Krakow, Budapest, Vienna) and then head for Paris for a couple of weeks.  My twin sister will meet us in Paris just before Jim departs for the USA and we will spend another six weeks traveling in France, Spain and Italy to celebrate our 75th birthday.

So we've lots of traveling to do over the next year...stay tuned for updates as we put our plans together.  In the meantime, I'll post photos regularly for your enjoyment.

Posted by Martha at 6:07 PM No comments: