My vacation was great and I've enjoyed not stressing about my daily blog...especially after deleting so many posts at the beginning of October.  Since we last talked we spent several weeks in New Jersey visiting our daughter and her family.  During that time we took the opportunity to spend several days with friends in New York City.   We walked the streets, saw two plays and enjoyed the Big Apple.  It brought back memories of my first "birthday trip" with my twin sister in 1998.  Realizing that I had never put pen to paper on the memories I decided to compose a piece on the trip for my writing class that I'm taking at the University.  Now I'm sharing it with my friends around the world today.

In June of 1998, I was in Indiana visiting my twin sister Mary; and we were busy planning the celebration of our sixtieth birthday coming up in December.  The family had always gathered in Indiana for surprise parties for our older sisters on their sixtieth; but we wanted something different!
Within a week we had made a decision that the perfect way to celebrate our birthday was not with our families but only with our two older sisters in the Big Apple:  New York City.  Given that our birthday falls just three days before Christmas, we weren't sure how our husbands and children would feel about our trip; but we plunged ahead with our plans.
We called our sisters and they were as excited about the trip as we were.  Soon we were scheduling all of the things that we wanted to do; think of the perfect date with your best fella and that was our plan.   We started making reservations and writing letters in an attempt to get tickets for television shows.  Yes, David Letterman was high on our list since he was from Indiana.  All four of us sent in requests for tickets; but that was one item on our list that didn't happen!
Another hitch was the reservation for our birthday dinner.  We had in mind that our special dinner should be in the Rainbow & Stars Room in Rockefeller Center; they decided to close that winter for redecorating.   Disappointed but soon we started thinking of other restaurants that were really special and finally decided to go to the Windows of the World at the top of the World Trade Center.  Little did we know that it would be blown out of the skyline three years later.
Returning to California I broke the news to my husband and children that I was planning my birthday with my sisters in New York City.  Mary and I had not been together on our birthday since 1956, our eighteenth birthday; so how could they say much of anything.   I promised to be home for our annual Christmas Eve Mass and family party.
Through the fall we continued to make our plans for December; soon I had reservations on American Airlines to fly from California into JFK in New York City.  All three of my sisters were flying together from Indiana and would arrive before me.  The plan was for me to take a shuttle bus to the hotel and meet them there on December 21st.
We reserved a room with two queen beds at the Sheraton Manhattan on 7th at 53rd street, smack dab in the center of all the places we wanted to see on our special trip.  I had been traveling at that time for business and had accrued Sheraton Points that allowed us the use of the concierge floor, an added plus for free breakfast in the morning and cocktails in the evening!
December arrived with a flurry of activity; we had our annual Eastlake Christmas Boat Parade party and then I worked to prepared the house for the family party on Christmas Eve.  By the time I left for New York the tables were set, the Christmas gifts were wrapped and under the tree; except those for the grandchildren that we sorted by age and arranged on the staircase with the youngest at the bottom.  Food was purchased and ready for Jim to prepare early on the 24th.  The pizza was ordered...a traditional food for the grandchildren...and set for delivery just as we would be returning from Mass.  I had dotted my "i's" and crossed my "t's", so off to the Big Apple I flew on December 21st!
The weather in NYC was perfect as I landed: crisp, clear and brisk, but no snow.  I arrived at the Sheraton Hotel by way of the shuttle bus and found all three of my sisters waiting for me.  Soon we were off to see the fabulous Christmas decorations in Rockefeller Plaza.  Absolutely amazing to each of us; none  of us had ever seen such huge displays.  It was an Alice In Wonderful version of Christmas ornaments' that had been scattered across the city like magic!   The trees were wrapped with sparkling lights and we found it difficult to stop walking.  We finally return to our hotel and a fun night of chattering away into the wee hours. 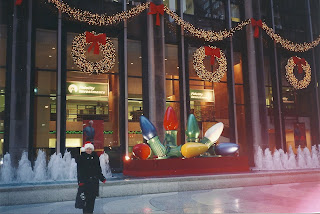 The four of us had never before slept in the same room with each other and those few days created a bond that has lasted these many years.   My oldest sister was born in 1925, then a brother in 1932, another sister in 1935 and we twins in 1938 plus the unexpected baby brother in 1943.  We were like two families because of the difference in ages and we were lumped in with the baby brother!  What a difference this one trip has made in our relationships with our older sisters in the ensuing years.
Mary and I were determined to be on the "Today Show" for our birthday.  So, early on the morning of December 22nd, our actual birthday, we set the alarm for the crack of dawn and quietly slipped out of the hotel early in the morning.  It was still dark when we arrived at the television station that is located adjacent to Rockefeller Plaza.  Mary had purchased red hats and gloves for us to wear...as the wolf would say, "the better to see you my dear"; and prepared a large sign that said, "TWINS 60 TODAY" and two smaller ones.  One of these told the story of our trip to NYC and the other referenced the fact that the large Christmas tree on the plaza was also sixty years old.  I'm sure it was our smiling faces that actually caught his eye.  Plus the Santa hats that we'd also brought with us from home. 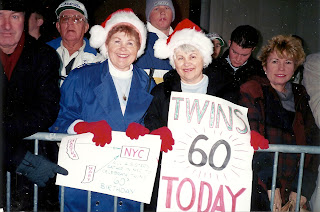 We were early enough that we positioned ourselves at the rope where we knew that Al Roker would be standing when talking to the audience.  By the time the show started filming the area was packed solid but we held our spot and sure enough we were interviewed for all of maybe a minute or was that thirty seconds, and that was our claim to fame! 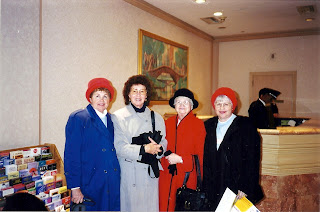 Back to the hotel to pick up the sleepy heads that had enjoy several extra hours.  They were busy getting ready and we soon realized that sharing one bathroom with four woman would not be an easy task.  Especially since our two older sisters needed hours of preparation as compared to our hop out of bed and go attitude.  After a quick breakfast on the Concierge Floor, we were out the door and headed for our first adventure:  The Empire State Building.
As we rode up in the elevator, another passenger turned and said to us, "Are you the twins that were on the Today Show this morning?"   Well you can just imagine how that made our day!  What fun as we braved the strong winds at the observation deck and thought about the movies that had been made about this very spot.  One of the views that I caught on my camera was of the very tall World Trade Center Buildings that loomed above the tall buildings near the tip of the Island.  It was special as we were having dinner there this evening.
Heading back we took time to see the magnificent Christmas Decorations in Rockefeller Center on our way for a visit the St. Patrick's Cathedral.  Followed by a light lunch before we got in line for our matinee performance of the Rockettes at Radio City Hall.
What a day...and it was not over yet!  After the show we walked towards our hotel enjoying the many stores and their individual Christmas displays.  After waiting for our older sisters; we were ready much faster than they were, we headed up to the Concierge Floor for cocktails before waving down a taxi for our evening adventure.
Our dinner at the Windows of the World Restaurant was a gourmet feast complete with matching wines and then a small birthday cake with two candles for dessert.  The views were spectacular and it was truly a moment to remember.   Heading home by taxi we shared stories of memories of the past and then tucked into a deep sleep much faster than the first night. 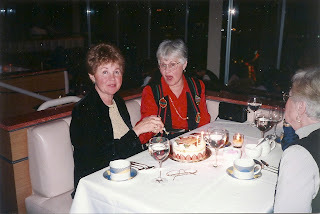 Rising early on the morning of the 23rd, our last full day in the Big Apple, we stopped in to see the Trump Towers and then over to Central Park where we caught the prettiest horse buggy we could find.  The weather was crisp and very cold as we bundled under the horse blankets provided by the cabbie!  What a glorious way to see Central Park as we snuggled deep into our blankets.   After our ride we crossed the street and entered the Plaza Hotel for a warm drink and to enjoy the very old and well preserved decor of years gone by. 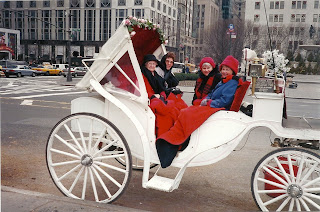 From there we headed back for the hotel and a quick rest and cocktails before catching another taxi to the famous restaurant known as "The Tavern on the Green" for dinner compliments of our oldest sister as her birthday gift to us.  Then it was off to the theater for a stage production of "Miss Saigon" a gift from our other sister.   It was a late night and not much chatter at bedtime as we quieted down for our last winter's sleep together in New York City.
We woke on the 24th to snow; beautiful but what would it do to our flights?  My flight was scheduled for noon and I arrived in plenty of time.  My sisters enjoyed a day of snow before heading to the airport for their short flight to Indiana.   I boarded the plane and then waited for nearly three hours before we were able to take off because of the icing problems.  My well laid plans were suddenly in turmoil!   My three o'clock arrival stretched further and further.   Decisions were made just before I finally left the tarmac that everyone would go to Mass and have dinner without me; actually without us as Jim was going to be at the airport waiting for me.
The plane touched ground in Los Angeles about six pm and we headed in traffic towards our home in Orange County.  Everyone was waiting to open presents when we walked into their warm embrace at the end of a very hectic day for all of us.   Did I regret throwing everyone's Christmas Eve into chaos...not for a New York Minute!

Having just returned from a trip to New York City and reviewing the changes from my first trip:  The World Trade Center is being rebuilt, only one building but still will eventually tower over the other buildings nearby.  The area near the center has been totally rehabbed and is a vibrant and important part of the city.  The Rockettes are still dancing, Time Square is now reserved for pedestrians, The Tavern on the Green has closed, The Plaza Hotel is now mostly condos, the carriages at Central Park are still beautiful and life goes on in the Big Apple!
Posted by Martha at 3:12 PM