A lazy day off today, we slept in until well after 8 am.  About 9:30 we watched as the owners of the building used the pulley at the top of nearly every building, including ours, to haul some heavy bags up to the third floor rather than carry them up the very steep steps.   Our steps are not unusual here in Amsterdam, they are all built this way it seems.  Fun seeing them do this.  We also continued to watch the construction on the block.  The digging of the dirt is over, and today they have delivered what looks like materials to put in concrete forms eventually.   I hope that we are still here when they do the cement!

Got a great email from my sister Mary about the fact that she and her daughter are going to be witnessing the royal wedding tomorrow in a local theater.   They’re showing it on a big screen and the people are dressing up with special hats in honor of the day.   Should be fun for them.   I think I’ll have to wait for Facebook and the Wi-Fi to see the photos.  We don’t have a television here in the apartment.

I kept busy this morning mending our seat cushion ties.   They really help soften the wood chairs at   And, since I’ve been working all day on various things on the computer; much needed.

I have completely caught up with writing my journal entries on the computer.  It helps that I’ve written daily notes in my notebook; easier to remember what we did each day.  We went for a short walk to the grocery store, only half a mile each way, and picked up food for two days.   Then Jim took a two mile walk to the violin repair shop for the exercise.

It’s been a good rest day and we’ll end with our daily card game after dinner.  Then I plan to read my books on the Kindle.  Tomorrow its back to being a tourist again!

Awake at 8 am, overcast and COLD.  Heard from Bill H that he was back to work after his broken leg, always good to hear good news from home.   I’d finished the first nine chapters of my book last night and read a few more this morning before braving the cool morning air outside of my warm bed.  We only have one blanket but it likes sleeping in a feather bed!  Love it!

At 10:30 we left the house and walked to Tram # 4. We stopped along the way at the Restaurant that we’d seen yesterday that looked like one we’d like to have a meal at.  The name Ratatouille caught our attention.  Sure enough in the window were little stuffed mice because of the movie of the same name.  Alas, they looked like they were permanently closed!   So we’ll have to find another restaurant for our Sunday evening meal.

We purchased an all-day ticket and headed towards Central Station.   We hopped off the Tram at Dam Station and walked over to the Royal Palace and the New Church.    The palace was originally built as the City Hall.  During the reign of Napoleon, the Netherlands were taken by the French and his brother was installed as the King.  He made the city hall his palace and it has remained a “palace” ever since.   And it is VERY palatial!   Huge marble central hall where banquets are held for visiting dignitaries from around the world.  The royal apartments are used to house visiting dignitaries.  The bedrooms were glassed in so we could see the very valuable furniture without any possibility of damage!   But the free audio guides were done in all languages and one had a choice of an adult version or one in a child’s voice for children by children.    We walked into the Old Church next door, a mammoth cathedral that is now used for exhibits and you must pay to actually get inside to see the interior of the old church.   We glanced between the barriers and got a good enough view to then head out and on to our next quest.

Before noon we were out walking the Jordaan Walk in our Rick Steve’s Book.  The name comes from the fact that this is a very picturesque area to walk among six charming canals, homes, and shops.   We stopped at the Tulip Museum where you could purchase bulbs packaged for the trip home.  Then the Delft Blue Shop next door where I priced a five-fingered vase; only 350 euros!    I sat it back on the shelf very carefully.  We walked to the Wester-kerk church then on to the Anne Frank House.  Both very crowded on this Saturday afternoon.   There is now a statue of her in the park near her home.   Also at the church there is a memorial for all of the homosexuals that were killed during WW II by the Nazis.

I’ve mentioned several times of places we’ve visited on previous trips to Amsterdam; so I went to my Blog and typed in the word Amsterdam last night.   In an instant it had pulled up two blogs:

1)  9/23/2000 when we stayed in Haarlan and came to Amsterdam by train one day to visit the Anne Frank Museum and the Rijksmuseum.  Walked around the Red Light District and scooted back to Haarlan on the train.   Haarlan is a beautiful town to stay in, very old.

2)  7/3/2010, our 50th wedding anniversary trip, we stayed southeast of the city at the Hotel Tulip Inn.  We had to walk a piece to the Metro Station, it was the last stop then, and rode the Metro into the city to the Rembrandts House/Museum where we did a tour, we walked through the street market that we visited this week while walking to the Rijksmuseum which was undergoing extensive remodeling at the time.  Then back on the Metro and out of the city.   We really missed the charm of this city that you find when you walk extensive through the different areas.   Staying eleven days has given us the advantage of really getting to know a wonderful city. 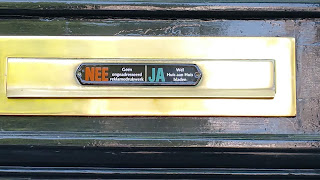 We also learned about “Nee” or “Ja”, no or yes, from the Amsterdam book.   The postal system allows people to determine if they want junk mail or not.  Mail is delivered in a slot in the door and on the slot you can indicate whether or not you want junk mail delivered.    Always fun to learn the little things about everyday life in a new country.

By 1 pm we were on the Tram # 13 and heading to an outlying area of the city called Geuzenveld.  We noticed many muslin woman with their distinctive head covering and long coats.  We also saw a minaret in the distance indicating a Mosque.    We’ve yet to see an area where the buildings are not well kept and new construction always happening.   The area is to the west of Central Station, about a 30 minute ride from the city Center.   Amsterdam has a very well mixed population from around the world sprinkled in every area of the city.   We were back at Central Station by 2:15 pm and jumped aboard Tram # 2 for another thirty minute ride each way to Niew Sloten, located southwest of the Central Station.   Definitely a fun and easy way to see extensive parts of the city.  The all-day pass is only 7.50 euros each.

By 4 pm we were back at Central Station and found our Tram # 4 for our trip home.  We got off at the Street Market.   It’s a permanent Market that is open every day except Sunday.  The booths run for five block with stores on each side of the street.   Always busy and fun to walk as it’s only two blocks from our apartment.   We were home by 4:30 pm.

We played cards, each winning two hands, before dinner.   I caught up on all the news about the royal wedding of Harry and Megan on the Wi-Fi.   My twin posted photos of their night out at the local theater in Michigan where they dressed up with fancy hats they’d made for a royal viewing of the wedding!  Read our books after dinner and then Jim did a bit of laundry before we called it a night.