Tuesday,  May 22nd, 2018      Our last day in Amsterdam       overcast and rain most of the day
Awake about 8 am…. Heard from sister Mary that the her bank had charged her $58.22 for her 200 euros in Azores.  I checked the computer for our fees and found that we’d been charged $71.58 for 200 euros in Azores.  When looking at the ATM charges in Amsterdam; much cheaper.
We left the apartment about 10 am with coats and umbrellas.  On Tram #4 we purchased an all-day ticket.  On the way to the Central Station I had the opportunity to chat with Americans and help them a bit on where to get off of the tram.  They’re on a Viking Cruise.
Arrived just in time for the rain at the train station.  First stop was to purchase our train tickets for tomorrow morning’s trip to Schiphol Airport.  Supposedly a 15 minute trip for 5.30 euros each.  We hope to get to the airport by 9 am for our 12 noon flight.
We located the place to pick up a bus; we’re able to use the same ticket as the tram but couldn’t see where they loaded.  It was on the other side of the train station.  We found a pass through in the   center of the station that was lined with shops but free to walk through to the other side.  While I purchased the tickets Jim had enjoyed sitting on his cane seat and listening to the tourists who stopped to play on the grand piano in the station that is open to anyone who is brave enough to play for the rest of us!    Soon we boarded bus # 48 and rode the short distance to Kadijksplein stop where the National Maritine Museum is located in the port.  Rain coming down steady by the time that we arrived.  Only had to walk a couple of blocks from the bus stop and fortunately there were no lines so we went directly into the Museum.

This is a very large facility and has some fantastic exhibits.   It took us over two hours to visit those that we wanted to see.   The first thing we did was go to the replica of the Amsterdam, an 18th century cargo ship of the Dutch East India Company that is moored in the harbor next to the museum.   We entered along with several groups of students on field trips, so it was a bit crowded but it was fun to see their enthusiasm. 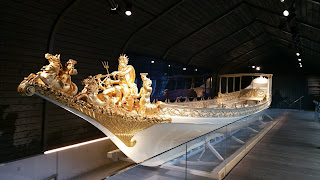 Our next visit which was also outside in a separate building was the Royal Barge that was built for William I between 1816-1818.  It was last used in 1962 for the silver wedding anniversary of Queen Juliana and Prince Bernhard.   In 1983 it was donated to the Museum and is a permanent part of their exhibits.

A large section of the museum displays major art work of sailing ships by well-known artists.  Very impressive and Jim really loved this section.   Rooms filled with maps; some hundreds of years old.  Some that showed California separated from the continent.  Models of various types of boats and ships.  And a large model of the port of Amsterdam with interactive features about what happens in their port.

A very interesting room was all about the stars and navigation.  The walls were covered with a night sky and the various constellations were outlined.   Inside the room was filled with equipment used on ships to navigate.
By 2 pm we were on our way to the bus stop; went the wrong way first but finally found it … yes, in the rain.  While we waited under the small overhang at the “station” a group of about twenty preschoolers joined us with their six adult teachers/parents.  They were very excited and loved splashing in the water puddles!   Their enthusiasm definitely added an element of fun to our day!
Arrived back at the Central Station where we decided to have a “tram trip” and hopped aboard Tram  # 24; one that we’d not ridden before.    It went all the way to Boelelaan and back; passing right by the 1928 Olympic Stadium.  Got to see the torch that is still there and it appears that the stadium is still in use.  By 3 pm we were back at the Central Station and decided to call it a day; we have to pack for our trip tomorrow.

So back on Tram # 4 and home to pack our things.  About 5 pm Jim walked a couple of blocks to pick up the lamb pieta bread sandwiches and we enjoyed them with the rest of our bottle of wine.   The suitcases are nearly packed and we’re going to enjoy reading our Kindle books tonight before bed.
Tomorrow will be a travel day; we leave from Amsterdam before 9 am and our flight is scheduled to leave at 12:30 pm.  We have a short layover in Iceland and then arrive in San Francisco in the late afternoon.   It a day of turning the clock back as we will be losing eight or nine hours before we arrive in California.   The flight time is ten and a half hours and there is a layover of an hour and twenty minutes.  It’s the kind of flight that I like to stay awake on so that I can go to bed and sleep when I arrive.  It’s gonna be a long day!  And we’re flying WOW Airlines…no frills but very inexpensive!
My steps for the day:  5,677 making nearly 3 miles.  Not much but it was a tram day!   See you in the USA.

WEDNESDAY, MAY 23RD, 2018                  TRAVEL TO USA             light rain
We were all packed by the time we went to bed last night.  The alarm clock was set for 7 am; but we were both awake by 6 am.  Ate a good breakfast and did the final clean up before quietly taking the suitcases down the narrow and steep flight of stairs to the street just after 7 am.
The rain was very light so it was easy to make our way the three blocks to the tram station.  We were there before the morning rush hour so we didn’t have any problems getting seats on the tram.    Soon we were at the Central Station and headed through the train gates with our tickets that we purchased yesterday.  There were stairs to the track but I saw an elevator and tried it. Oops, it took me to the wrong track and I had to go back down and tackle the stairs.  Fortunately, a nice young man asked if he could help!   It’s rare that an old person has to carry luggage all the way upstairs in a train station.  After we got on the right track we saw the elevator that would have also brought us up to the track. Duh!   Should have looked harder, but we each got help from young men in carrying the luggage up the flight of stairs.    We arrived at the airport about fifteen minutes later; great way to get to the airport.
We were at the airport before 9 am and first in line to check in after we got our tickets from the Kiosk; slowly getting used to doing this in airports.  When the luggage portion opened we actually weighed our own bags and printed the tags before the belt that it was on wisked the bag off to never never land.  Once we’d finished with the first bag we realized I’d put my tag on Jim’s luggage!   It was that last question…does this bag belong to this person?   Oops, quickly hit the cancel button and the bag came back and we reprinted the tags!     Everything is a learning experience these days.  But we totally checked in and checked our bags without any assistance.  The coming world.
Went through security where they pulled Jim’s carryon bag and took everything out and open and closed the umbrella inside of the bag several times.  I think they were looking for busy work, but Jim was cool and kept quiet while it was happening.   All checked in and then the waiting began; we still had nearly two hours.

Our flight on Wow Airlines, a no frills low budge airlines, took off on time and was fully loaded.  One of the things about this airlines is that all flights to/from Europe make a stop in Iceland.  It was a four hour flight and we had an hour layover to change to our next flight.    This flight was only half full so many people took advantage of the empty four seats in the center for beds.   Jim and I decided to stay awake for the entire flight, well actually Jim did some catnaps and we’d each snoozed a bit on the first leg of the journey, so that we could make the adjustment with the loss of time and go to bed when we arrive.

Arrived in San Francisco nine hours later and because of recovering nine hours we actually left at noon from Amsterdam and arrived in San Francisco at 5 pm on the same day!   Yes, a very long day!
We purchased tickets for the Bart Rail System and an hour later we were at our son’s home just outside of Walnut Creek.   We’re visiting until the 29th to celebrate both Memorial Day Weekend and our grandson’s high school graduation before heading south on Southwest Air to Orange County and home.   It was so nice to see Jay waiting for us at the Bart Station for the short drive to his home.
This will be my last post on this trip; hope that you enjoyed sharing our journey.