It's Friday morning here in Rome and Jim has left to spend a day with an audio guide in the Vatican Museum with no guilt feelings about keeping me on the bench too long.  This way when we visit together on Monday we can breeze through looking only at his very favorite pieces of art.

Our photos start with one of our luggage at home before we headed for the airport. 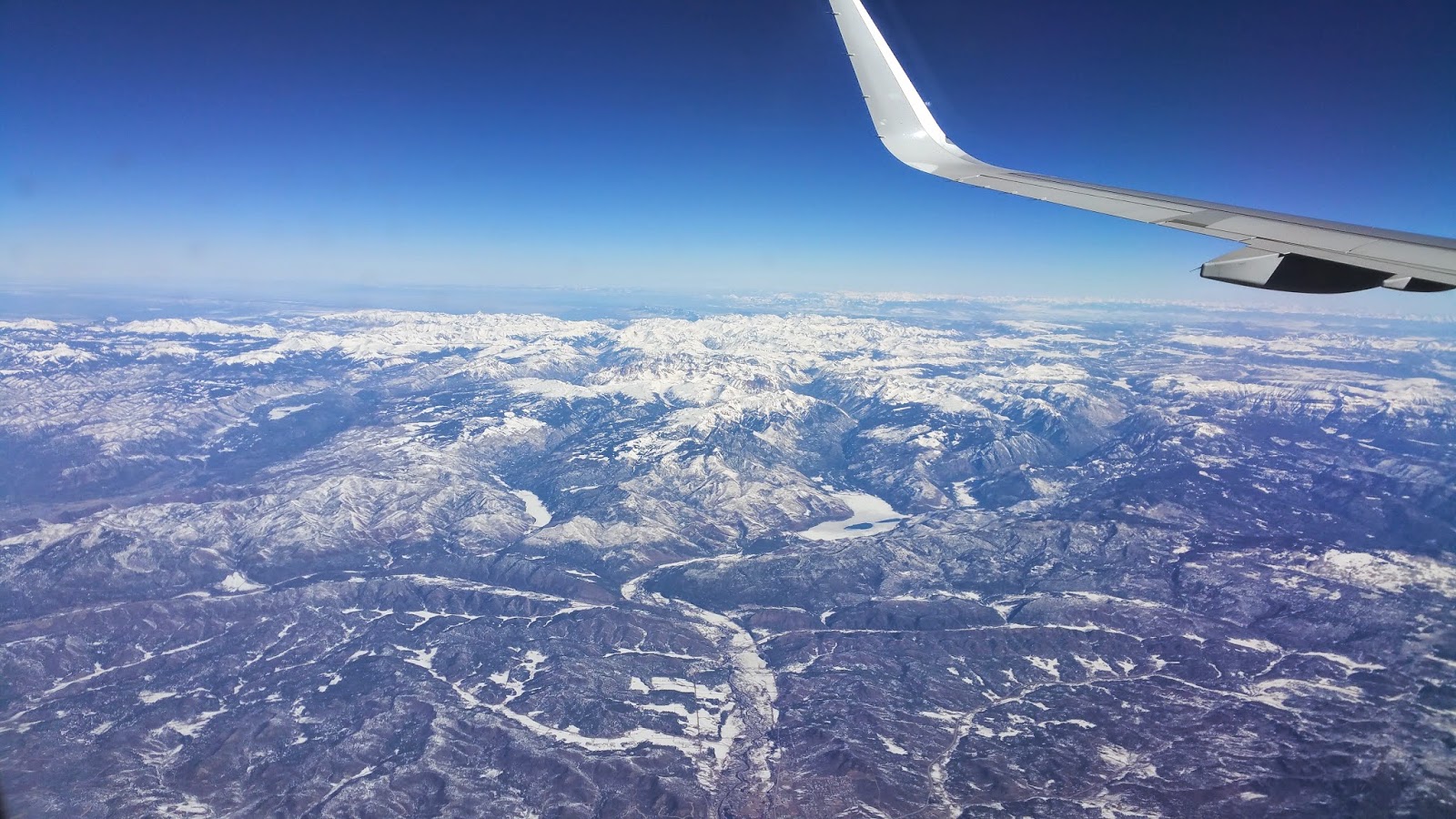 Our first "journal entry" of the day came early when I was in the backseat of the car (our daughter Jenn was in the passenger seat) and was busy talking with my daughter!  Neither of us noticed that Jim left the 91 Freeway and headed south on the 55.   When I noticed some building that I knew were along the 55 I realized he was driving us to Orange County Airport!  Oops...guess I forgot to tell him which airport we were leaving from.  A fast drive through the airport and on to the 405 freeway...we were soon headed in the right direction!  Good thing we left early at 4:45 am.  We were lucky not to hit heavy traffic and breezed into LAX at 6 am....two hours before our flight and not the three hours I'd planned...but we were okay.  Checked in and went thru security within minutes.  We were lucky and put into the line that did not required us to take anything out of our carryon luggage and walked through the old scanner and not the body scanner!

The flight to NYC on American Airlines took us over the snow covered western mountain ranges for a beautiful photo out the window.  Jim was in the window seat and I was in the middle.  The gentleman to my right was very interesting.  For the last ten years he has moved between South America (Buenos Aires and Mexico City), Europe (Paris, Berlin, Barcelona) and Los Angeles and New York City in the USA.  Not sure what is job is but to me sounded wonderful.  Originally from Germany (I think) but had a Greek Name.  Spoke many different languages and is now learning Chinese which we talked about as he explained some of the basic principles to me.  You'll notice in the photos that there was snow on the ground in NYC but not at the airport; however, it was raining lightly all the time w were there. 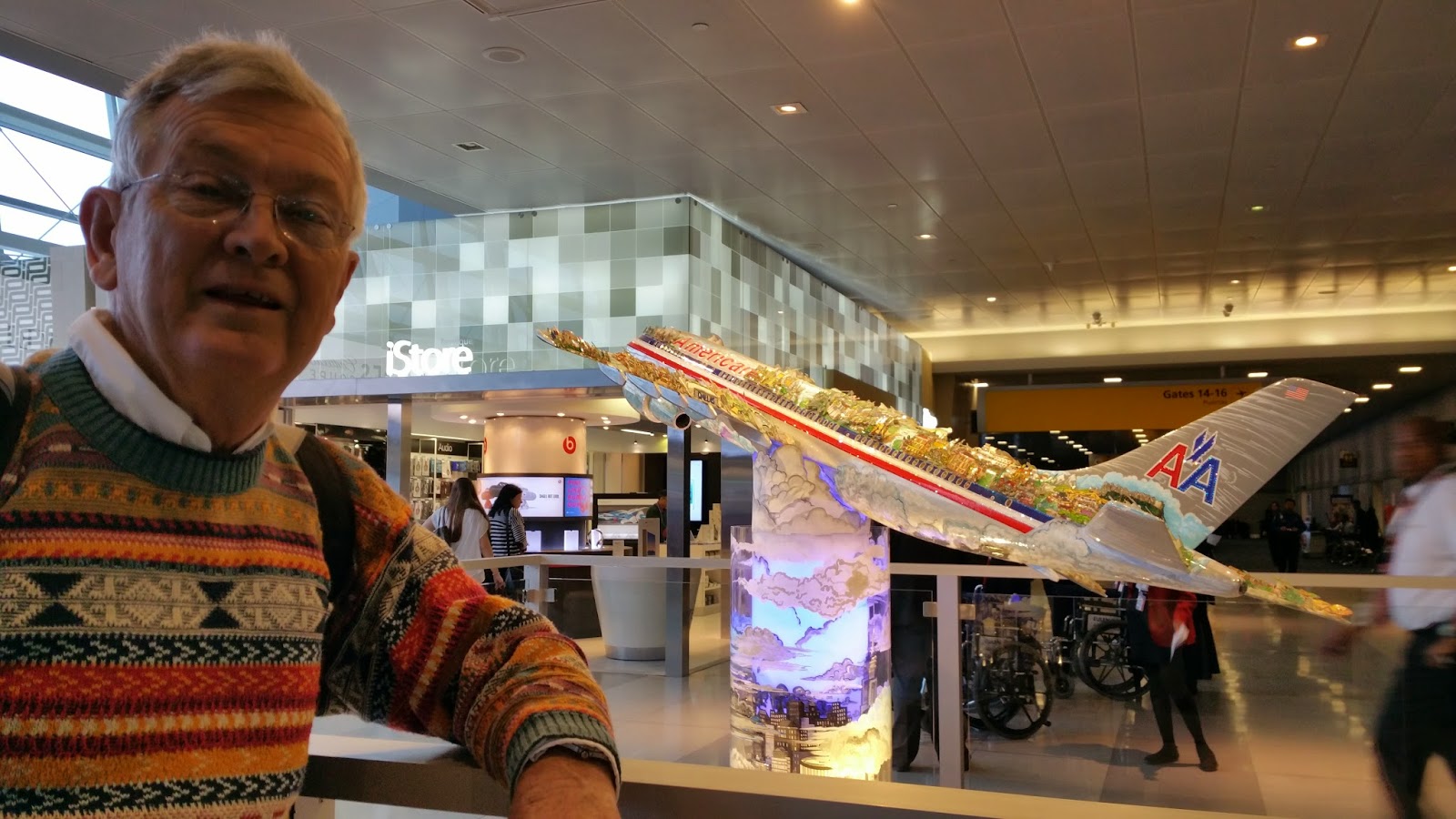 We arrived at JFK in NYC right on time and only had a two hour layover.  I met a delightful young girl while we waited.  Her name was Jenn and she was from Penn.  She was on her very first trip; a birthday gift to herself, meeting a friend in Sicily for 16 days.   We flew out of the same terminal but on British Air.  They fed us dinner and then the plan was to sleep through the night.  Didn't happen...we got caught up in two movies instead.  Enjoyed "Guardian of the Galaxy" and "100 Steps".   This was a brand new plane with all the controls on the back of the seat in front of us.  We had a choice of about a dozen movies, TV, etc.  Place to plug in for power and everything.  Wonderful!

Arrived in Dusseldorf, Germany about seven hours later...now on Europe time which is eight hours ahead of California.  Their Daylight Time change happens March 29th...then we will be nine hours.  We had a ten hour layover here.  Since we're using "air miles" to travel they sometimes change our schedule...we originally only had two hours here!  But we decided to make the best of it.  Jenn was also here for an extended stay and we got to know her a little better.  She was having trouble getting her AT&T to work in the International mode.  Our T-Mobile was working great so she used my phone to text her family to let them know she'd arrived in Germany okay.  FYI...that was also her very first airplane trip.  We practiced texting family; seems to be working just fine and we were also able to get emails.  Supposedly we have free texting anywhere in the world and also free data here in europe using the roaming networks.  Anxious to see if it's actually free????

We each tried to nap in the airport but had limited success.  Finally it was time to fly to Rome.  Great flight on British Air for two hours...most of which we slept...and we'd arrived!   Our next "journal entry" happened here.  We somehow got into the baggage claim area for Terminal One instead of Three...still not sure how we did that.  But with the help of strangers we found our way and had to enter through security to get our checked luggage which was there!  Then we had to find Fabio, our driver that was sent by the apartment owner; we saw a man with a sign that said "MARTA".... we approached him and asked him if he was Riccardo's driver?  Yes...we were soon in his van and off to the city.  It was now nearly eight o'clock in the evening.

We stopped at a gate in the countryside...I was puzzled as I knew our apartment was in the city?  Shortly we understood; he was picking up the owner.  Riccardo was injured in a motorbike accident nine days ago and is on crutches.  Riccardo speaks wonderful English...Fabio almost none.  Soon we were in heavy traffic driving along high walls on narrow streets.  Our apartment is located about a mile northwest of Vatican City.  It was about nine o'clock by the time we were in the apartment.  We had some brief instructions, paid our fees in Euro's we'd gotten at the ATM in Dusseldorf; he showed us the keys and he was off.  See the slideshow with the link below to see our apartment.

We looked at each other and decided to venture outside to see the area.  We tried each key carefully and enjoyed our stroll along with a gelato (ice cream).  Returned shortly to the apartment and had our third "journal entry" when we attempted to enter the wrong apartment  building.  Long story but when someone finally let us in the front door and the key did not work for the second door we knew something was wrong.  We have three doors to go through to get to our apartment.  Until then we were not aware that the outside of all the buildings on the street look the same!

Finally to bed about midnight we slept straight through to noon on Thursday!   Spent a few hours organizing and about four o'clock we ventured out for the second time.  This time we walked up to Via Aurelia and walked to Vatican City.  It must be about a mile as it took us thirty minutes.  Mostly downhill.  We enjoyed seeing the Basilica without any scaffolding for the first time in many years.   They have finally finished cleaning everything!  It's beautiful! 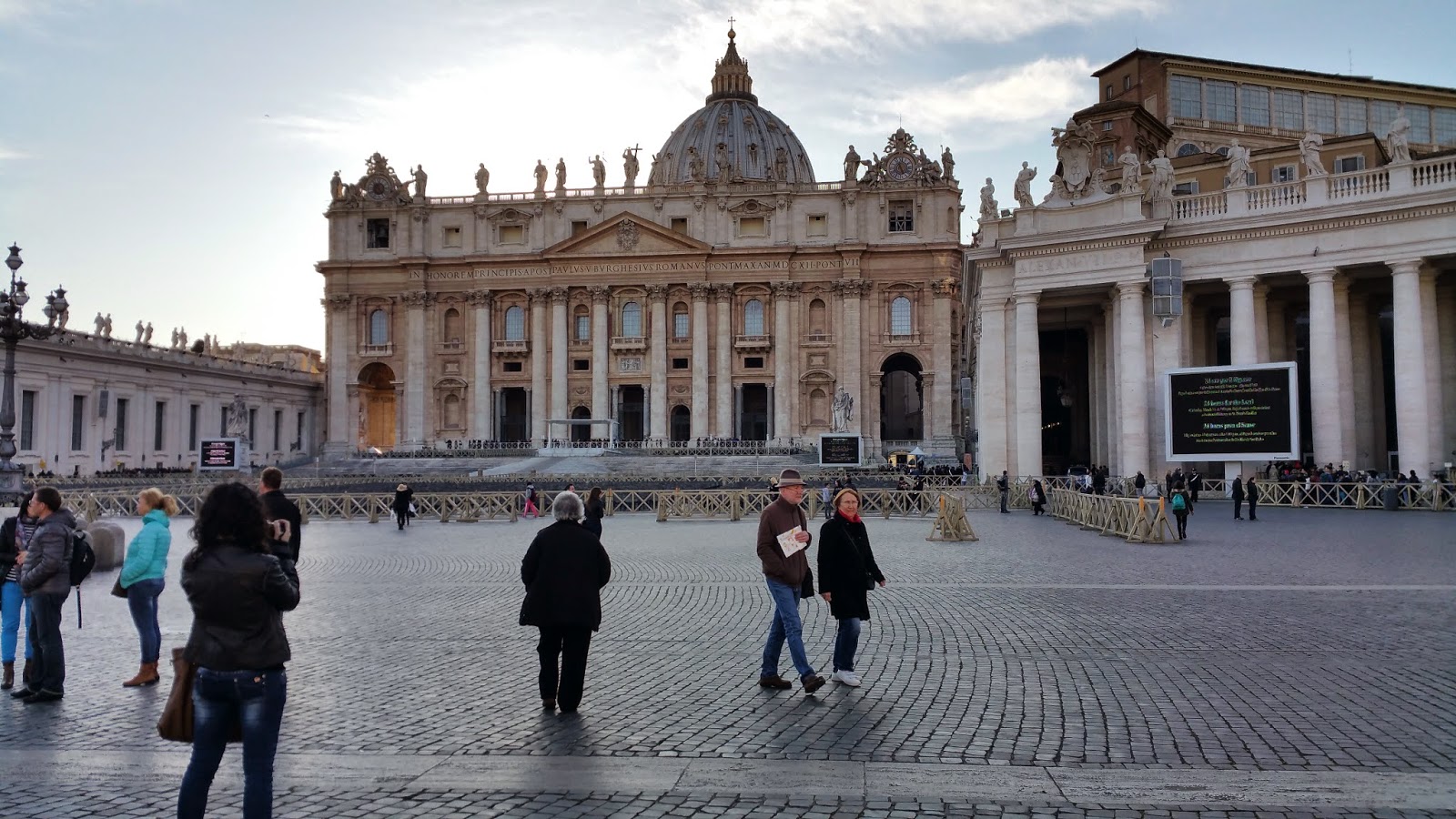 We purchased some one trip tickets and enjoyed the bus ride back to the apartment.  Then we began walking further up the street to find the large grocery store for some shopping.  It was a few block; did some shopping and then walked back to the apartment.  Stowed the groceries and headed back out.  It was getting colder and colder.  We got out our gloves, scarf and hats.  People here are still wearing their down jackets.  I do hope that it warms up soon.  We're thinking about the heavy coats that we decided not to bring.  Our thought was to "layer" our lighter coat with sweaters, etc. on cool days!
ry
Ate our first meal at Yummy's, a pizza restaurant nearby.  Very good.  Afterwards we walked more and found another large grocery store, nicer and closer than the first.  To bed about 10:30 for Jim and I tucked in by 11:30 pm.

The alarm rang at 8 am....Jim had a 10 am entry scheduled for the Vatican Museum.  I'm enjoying my morning and plan to get out and walk the area after I post this blog.

I've not posted the link before so will also be embedding the slideshow for those that can get it: