A glorious day of sunshine here in Rome as we read about friends who spent last night on cots in the airport in Chicago because of snowstorms.  Hopefully they are safely back in California by now.  We headed out the door without umbrellas in our bags about ten o'clock.  Half way to the Metro I remembered my watch and then when we were ready to enter the Metro I realized I'd forgotten my cell phone/camera; Jim waited while I went back to the apartment again.  I found it under the umbrellas that I'd taken out of the backpacks! 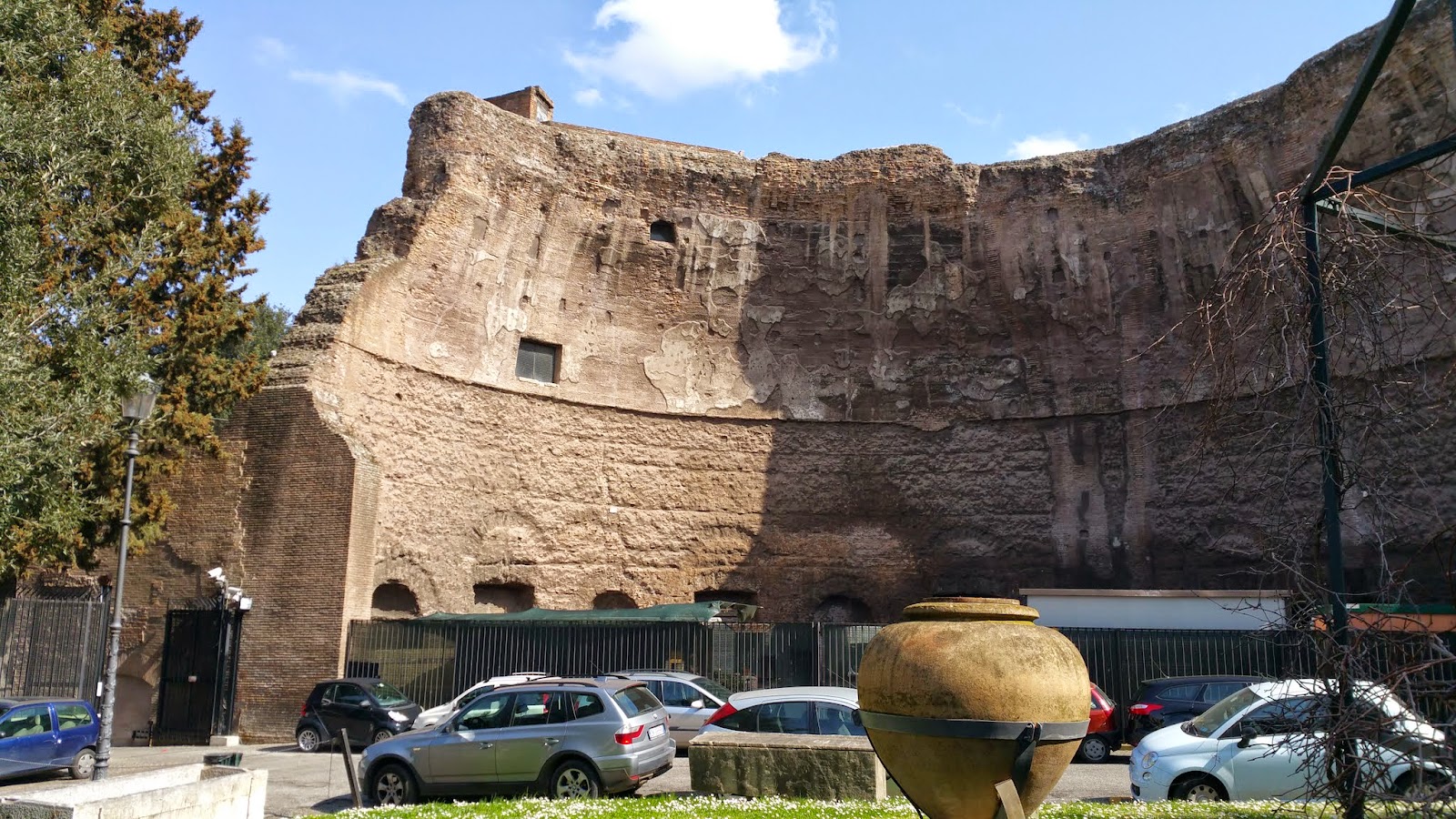 Soon we on our way the Republica Metro Stop where we walked around the corner and visited the Museums of the Baths of Dioclesian.  I walked by this so many times in the past and WOW...it's a great museum and we really enjoyed our hour.  And, it was free because we discovered that the seven euro ticket that we purchased for the Museum on Sunday is also good for entry over four days to three additional museums.  We did two of them today and will do the other one tomorrow!  What a bargain!  It pays to read the back of your ticket. 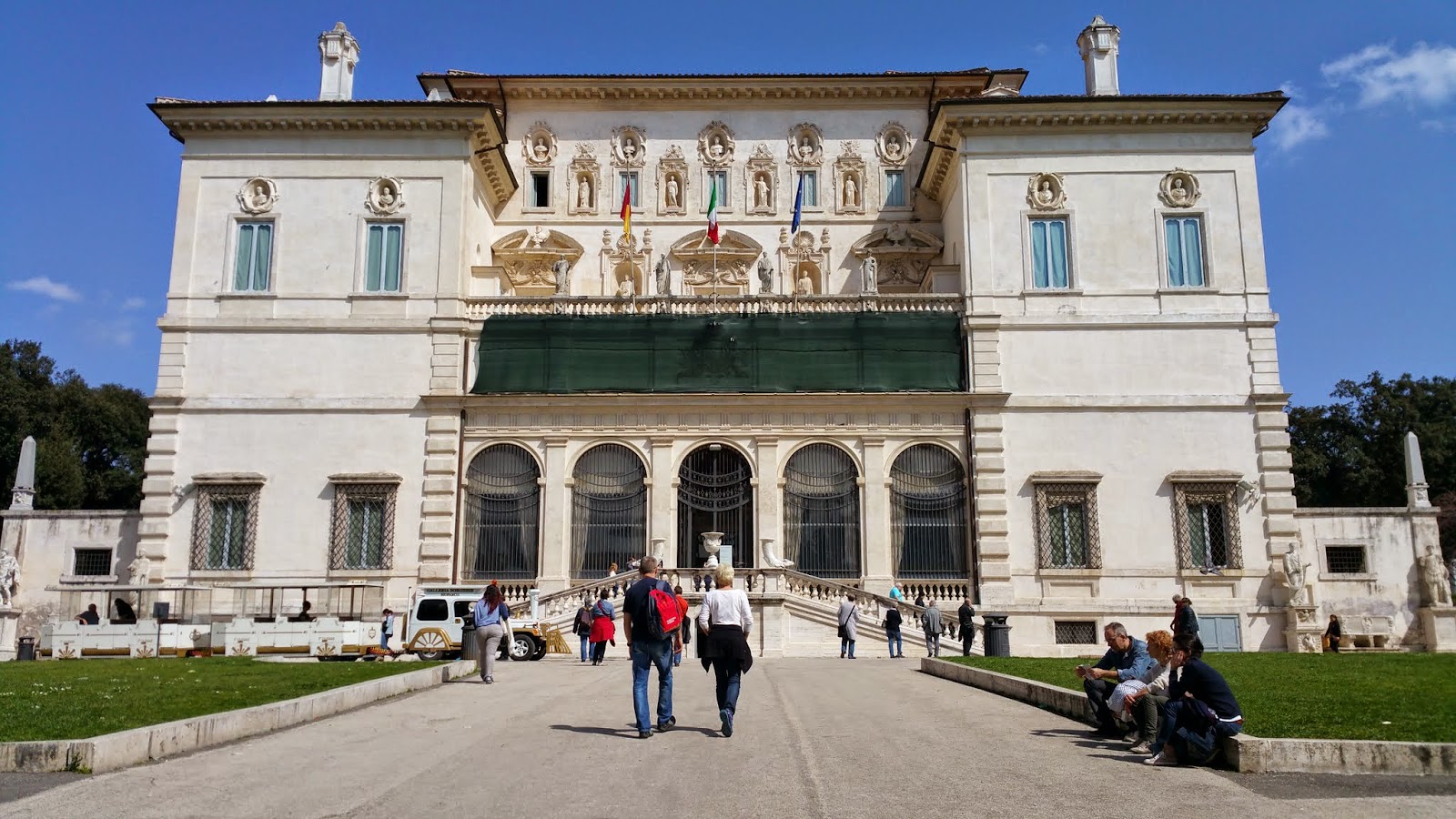 About noon we headed for the bus # 910 that took us right to the gates of the entry to the Borghese Museum.  There we picked up our tickets that we'd ordered months ago and then found a place to sit and have a snack while we waited for our entry time at 1:00 pm.  Every two hours they clear the museum and a new group enters for the following two hours.  We also had to check all bags including purses.  They asked if I had a camera when we checked the bags and I said only my cell phone.  He said the rules had just changed and contrary to the signs you are now allowed to take all the photos that you want without flash.  Another WOW for today! 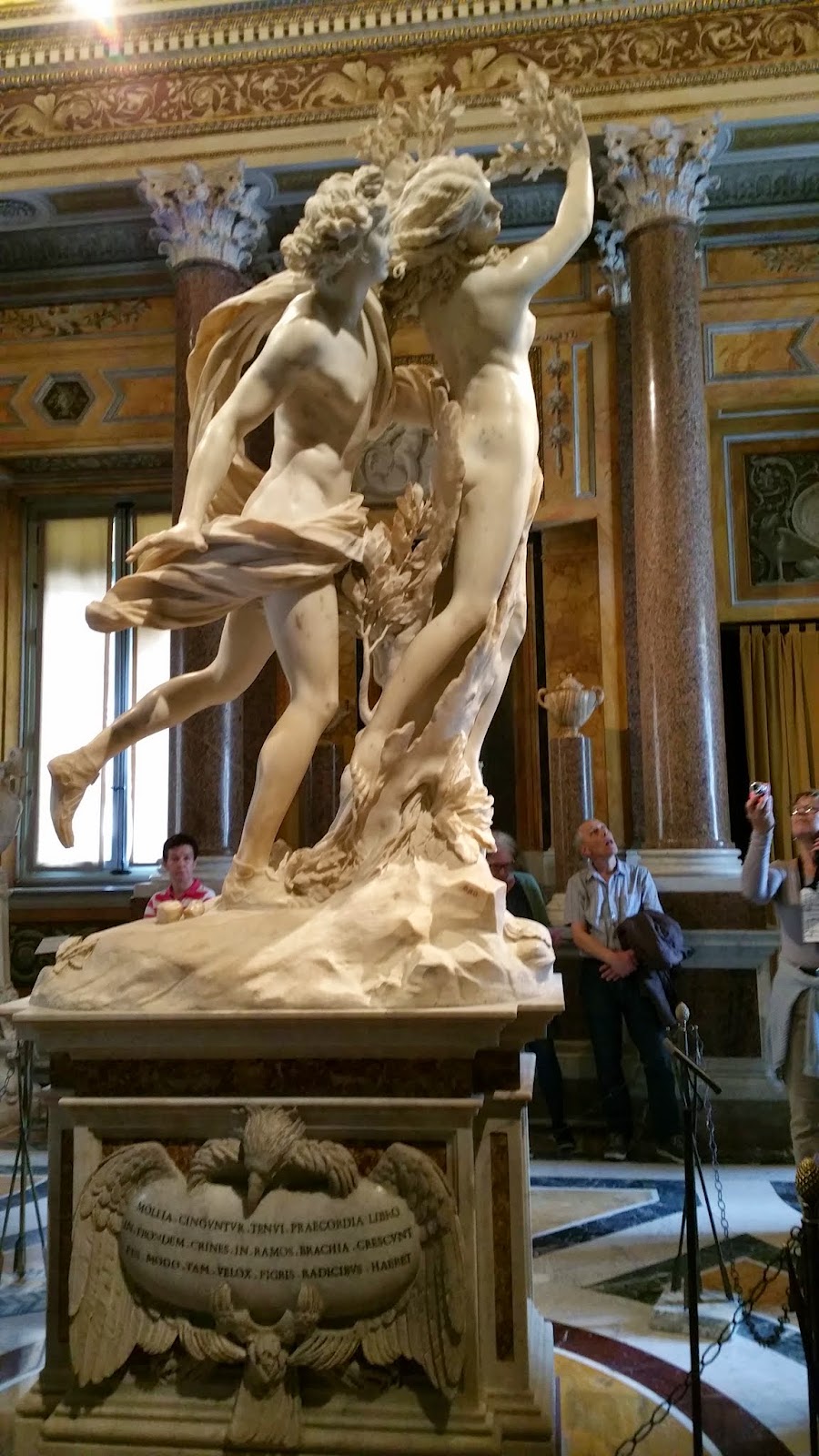 I've been in this museum many times before and I definitely made up for the photos that I couldn't take then during my visit today...you are only going to see a small portion of what I took as there were way too many of them for the slideshow!  Jim was intent on seeing the Bernini sculptures and the Caravaggio painting; he was not disappointed...they were all there waiting for him.   I had fun with my photo shoot!

Before three o'clock we were back outside and walking through the park all the way to the bluff that overlooks the Piazza dei Popolo and in the distance Saint Peters Basilica.  Had a fun photo of a group of kids taking a group shot with many of them holding their selfie sticks.  I have yet to learn how to use mine but will soon.  They are the rage here in Rome.  Vendors everywhere try to sell you one.  From there we continued to walk towards the Spanish Steps.  Just before we arrived we checked in at the Villa Medici,  now owned by France and is labeled the Academie Nationale De France....Napoleon inherited it when he married into the family and then he gave it to France.  You can only tour it on a tour and the English Tour is at noon so we'll go back tomorrow. 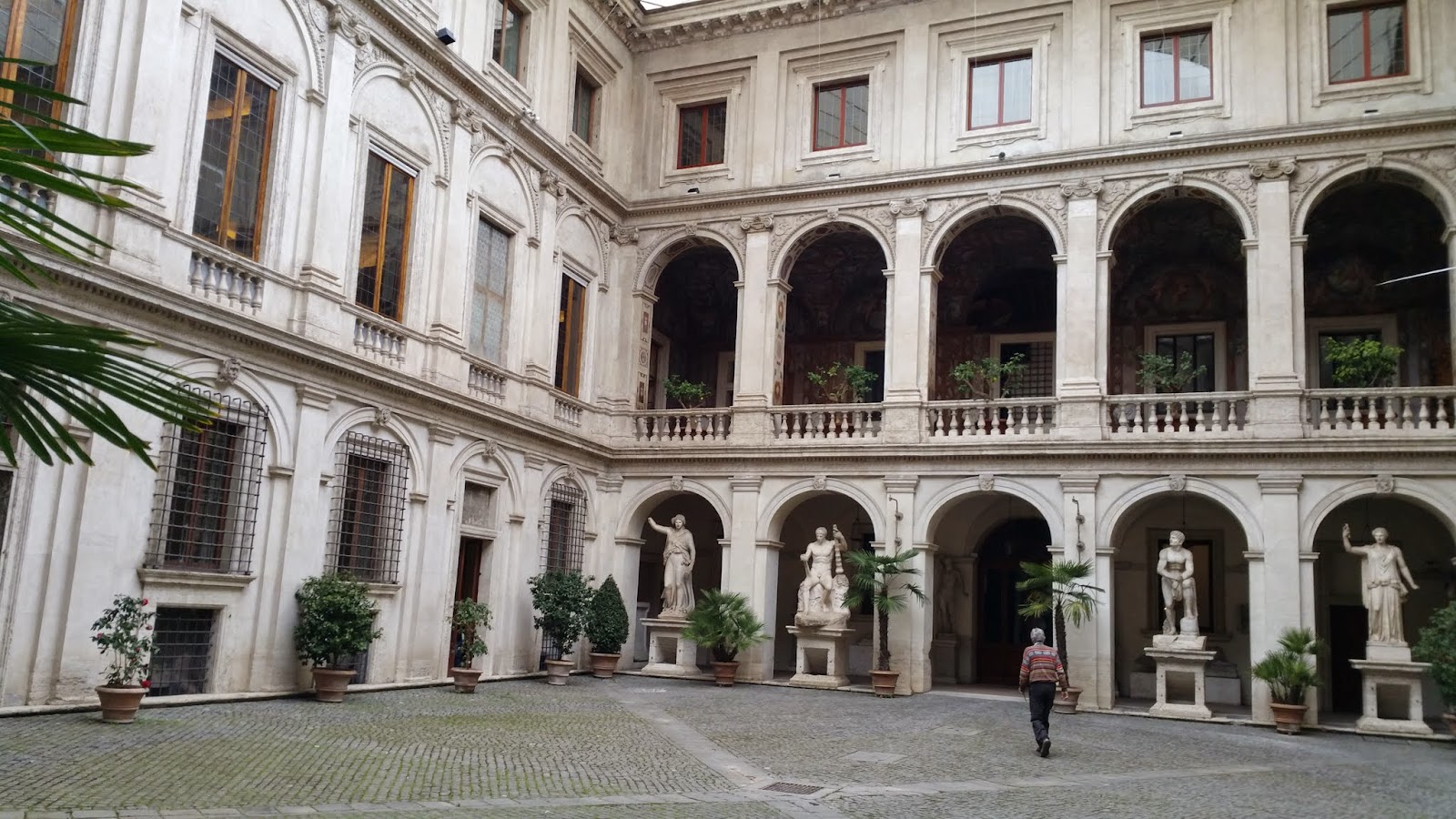 Down the stairs, through the crowds, and then continued walking towards our next museum...yes another free one from Sunday's ticket.   It took us a while and became necessary to use google maps on the cell phone but we finally found it just north of Plaza Navona.  It is called the Musee Nazionale Romano Palazzo Altemps.   Lots of statues and a beautiful restored palace from ancient times. 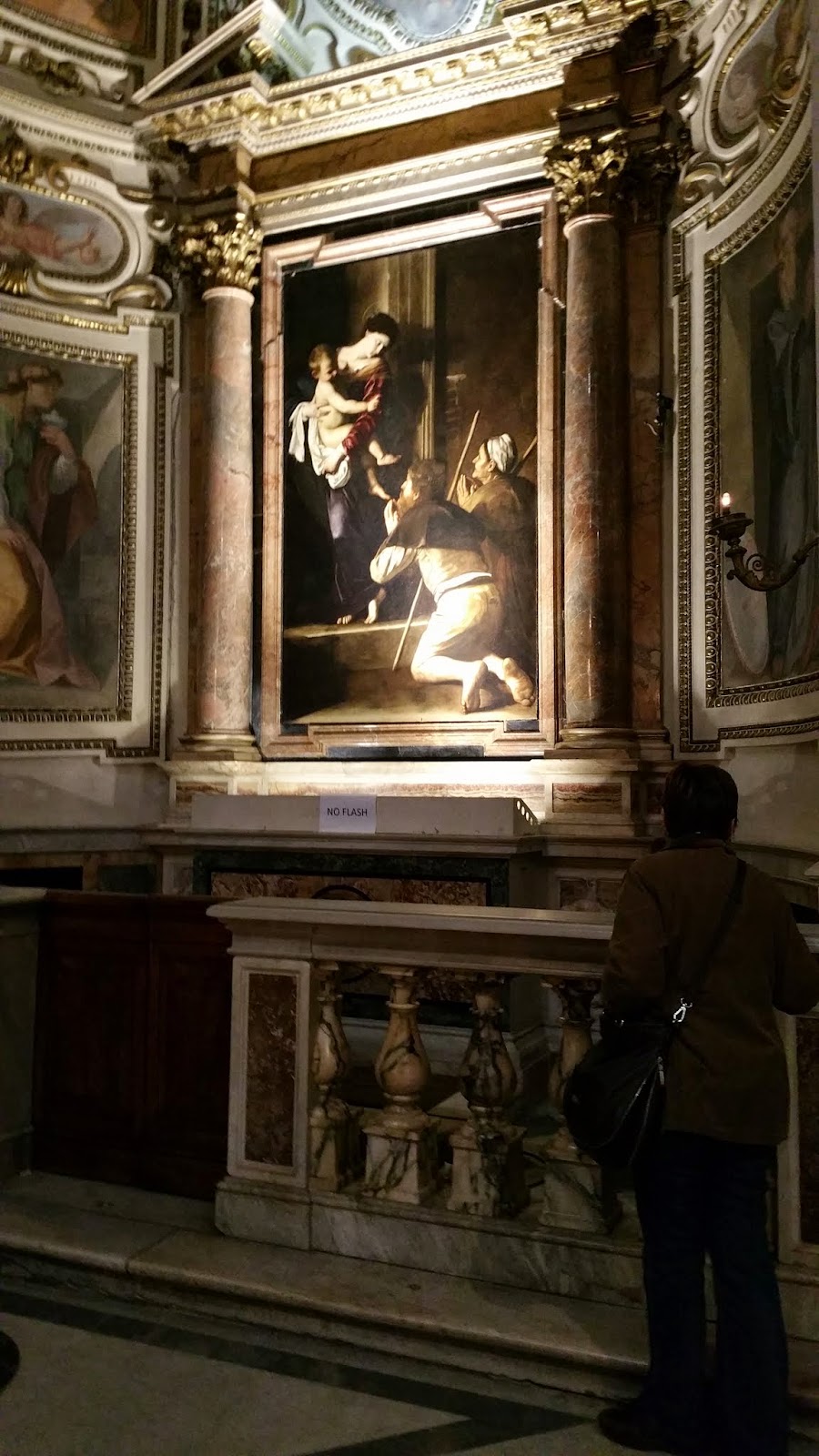 On to the next stop even though our feet were barely moving by now.  Very close by was the Basilica of Saint Agostino where we had a beautiful painting by our friend Caravaggio above one of the side altars.  By now my cell phone battery was drained and I attached a power pack to it...worked beautifully and I continued to take photos, etc.  Holding both the phone and the tethered power pack.

To find a bus home we walked across the Tiber River, walked around the Hall of Justice...a massive building...and on Piazza Cavor we found our bus #49 that would take us home.  Long day.  By the time we arrived home we'd logged 7.20 miles.  Dinner was soon ready and we're enjoying our evening.   Rain is predicted by midnight.

I hope you've enjoyed our journey today...the link to photos is below: