Traveling by Train To Florence 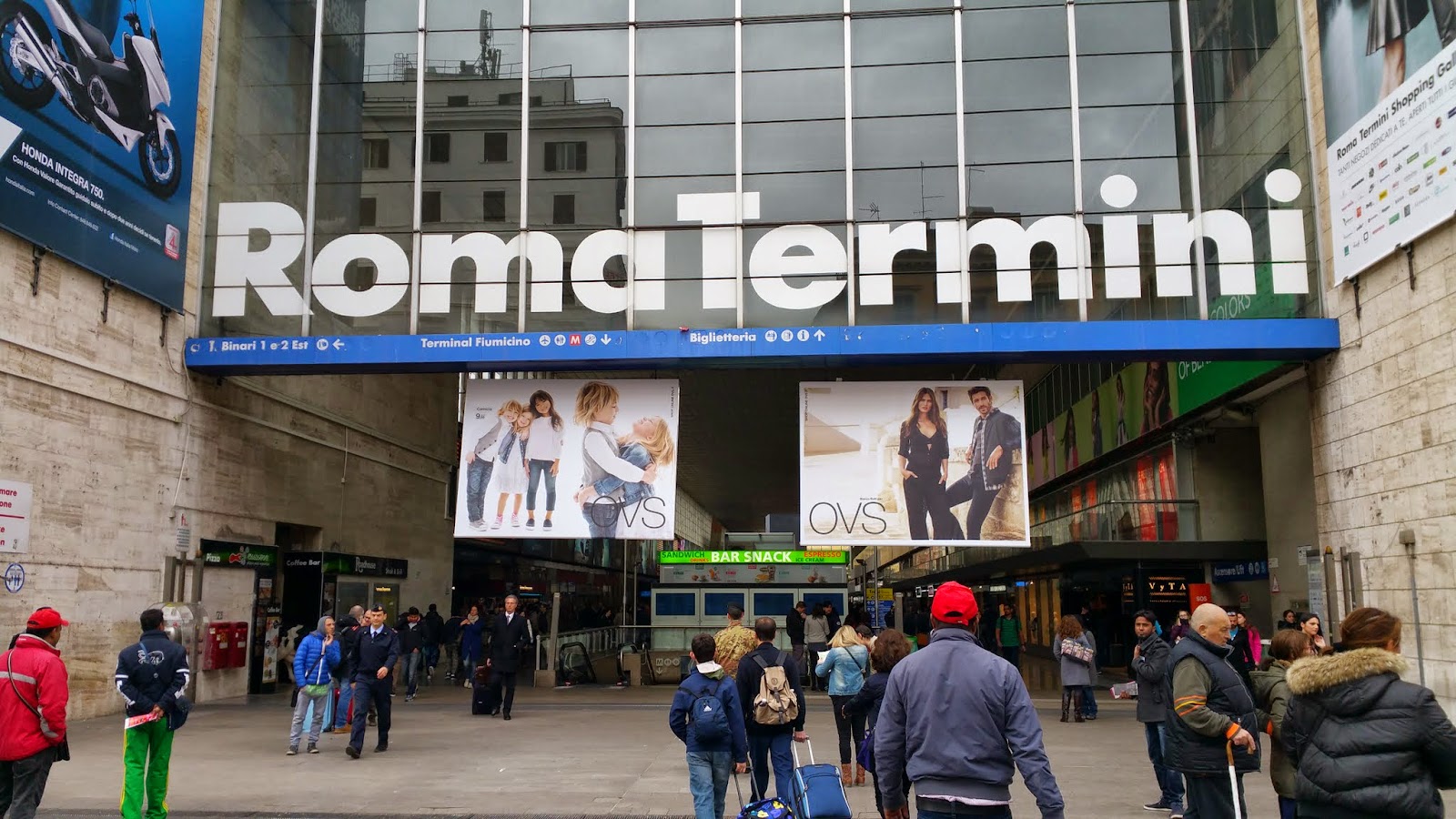 We packed our things last night so this morning was rather simple with putting last minute things together.  We tried calling the taxi company but the number we had was disconnected so we called our guiding light...Riccardo, our landlord; and he arranged for a taxi to pick us up at 10:15 instead of 10:30 as planned because the city was having a bus and metro strike today.   Their strikes generally only last for one day but can create some havoc for travelers.

Our driver spoke some English and I asked him about the street closure that we found yesterday on our walk.  He confirmed that yes, they close the street along the Roman Forum every Sunday and make it a safe and fun pedestrian walk for the Romans and the tourists. 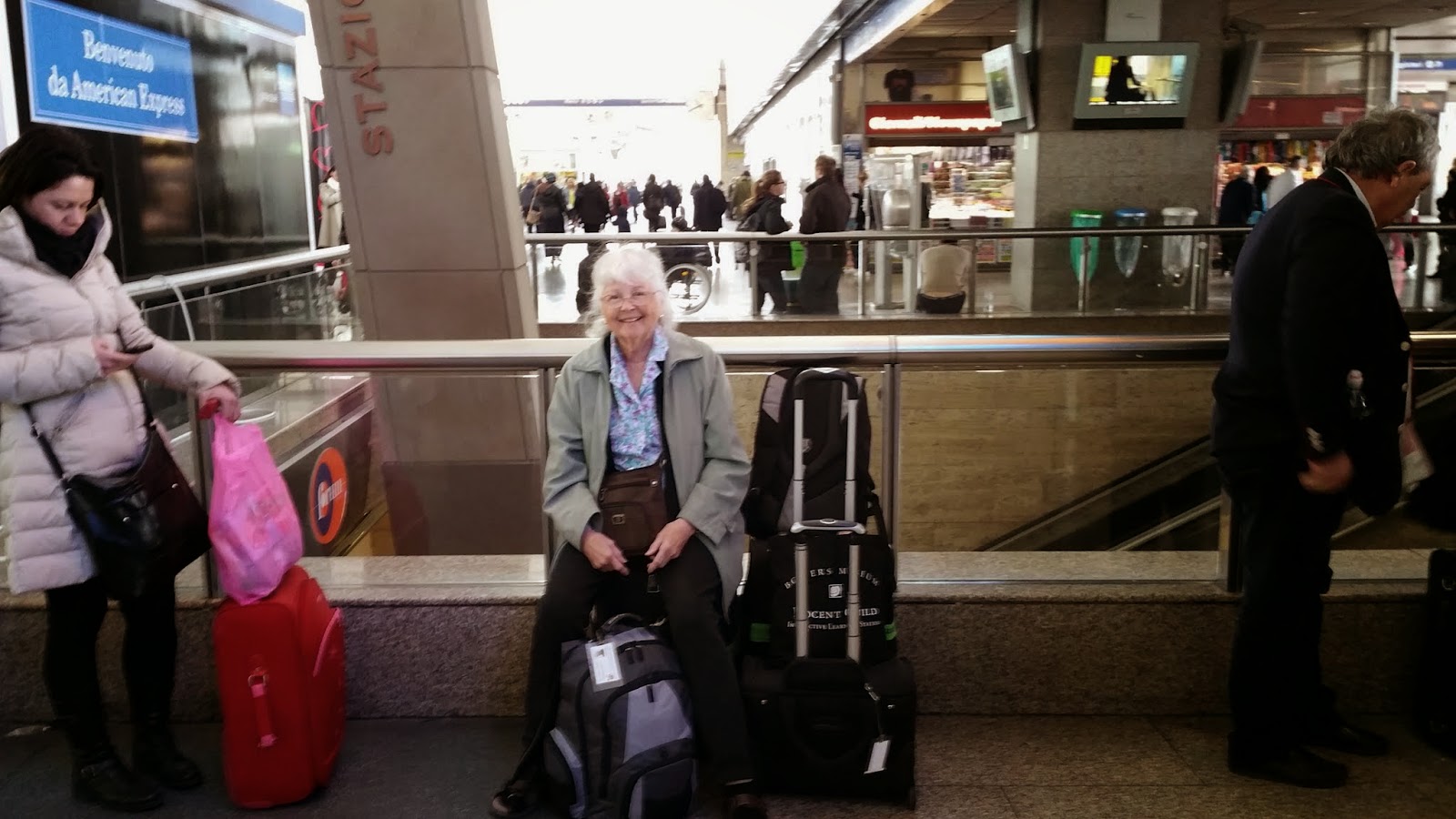 Arrived at Termini and spent the next hour sitting on our luggage waiting for the numbers to come up on the big board telling us what track number we were assigned to.  A great time to people watch.  We sat up camp with our backs against a glass fence around the stairs that gave us some protection for the luggage.   We had several offers of assistance when we first walked in but soon they left us alone.  That's the first sign of someone that is going to try to steal your things.  We've learned that lesson the hard way. 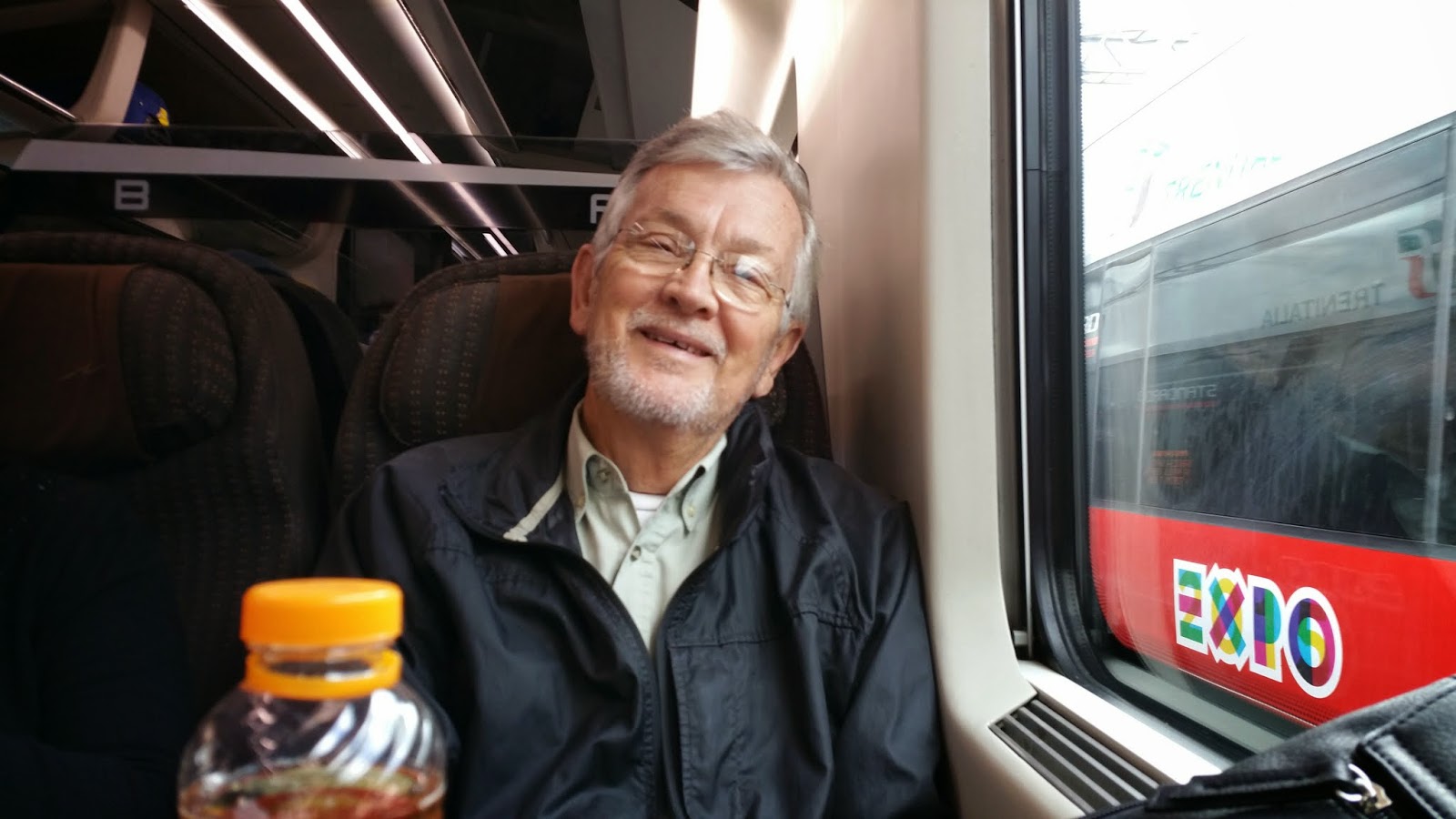 Our train left about fifteen minutes late but only had one stop in our two hour trip north.  I'd made sandwiches which we enjoyed on the trip.  The train car was open and very new; so much nicer than those small compartments.  We each had a reserve seat next to a window.  Jim slept part of the way.  Before we knew it we were pulling into Florence S.M.N. Station.  Out the door and into the taxi line.  While we were on the train we sent a text to our new landlord, Lorenzo, and he responded.  Used the Italian phone when my T-Mobile wasn't connecting.  He sent us a text so we knew that he was waiting for us and would meet us at 2:45 pm at the apartment.   I then discovered that the train had free wifi so I connected and read emails and Facebook while we sped along the track.

Arrived in Florence and walked to the taxi line; within minutes we were in a taxi where we gave the driver the card that I'd prepared with a map and the address of our apartment.  He spoke limited English but enough that we could converse.  He's only been a taxi driver for a short time and was doing well with his GPS assisting him to find streets.  Probably in his fifties and born in Florence.  It was a trick for him to find his way through the one way streets around the old center of Florence.  Finally we were crossing the Arno River on Ponte Alle Grazie, the bridge just east of Ponte Vecchio.  Our street, San Nicolo,  is very narrow and one way.  Loved the laundry hanging out the window. 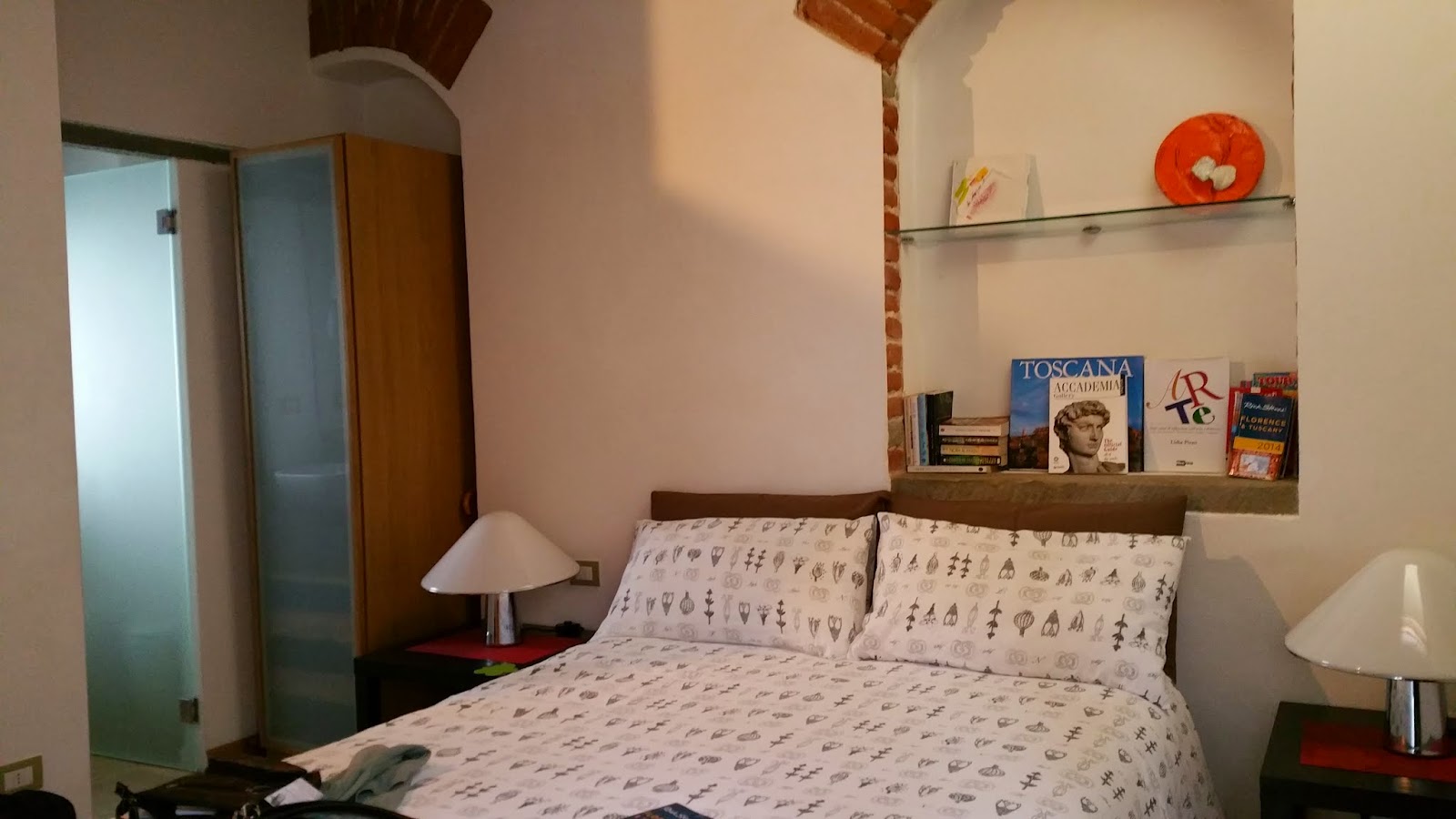 We have our own laundry line but it is inside the building in the central tower that allows all of the floors to have fresh air.  Lorenzo arrived right on time; about five minutes after we arrived.  The steps up to the apartment are very old, narrow and uneven.  We climb three flights of stairs to reach our little home at the top with beam ceilings, a skylight and a delightful view out the window.
Each window has a screen which is unusual in Europe.  Lorenzo apologized for them at first and showed us how to raise them when we didn't want them.  We were soooo happy.   Not really a huge issue right now but the mosquito season is coming and they will be very important for the occupants of this room.  We also have a unit for heat and air conditioning.  But no microwave.  Will actually have to cook all our food. 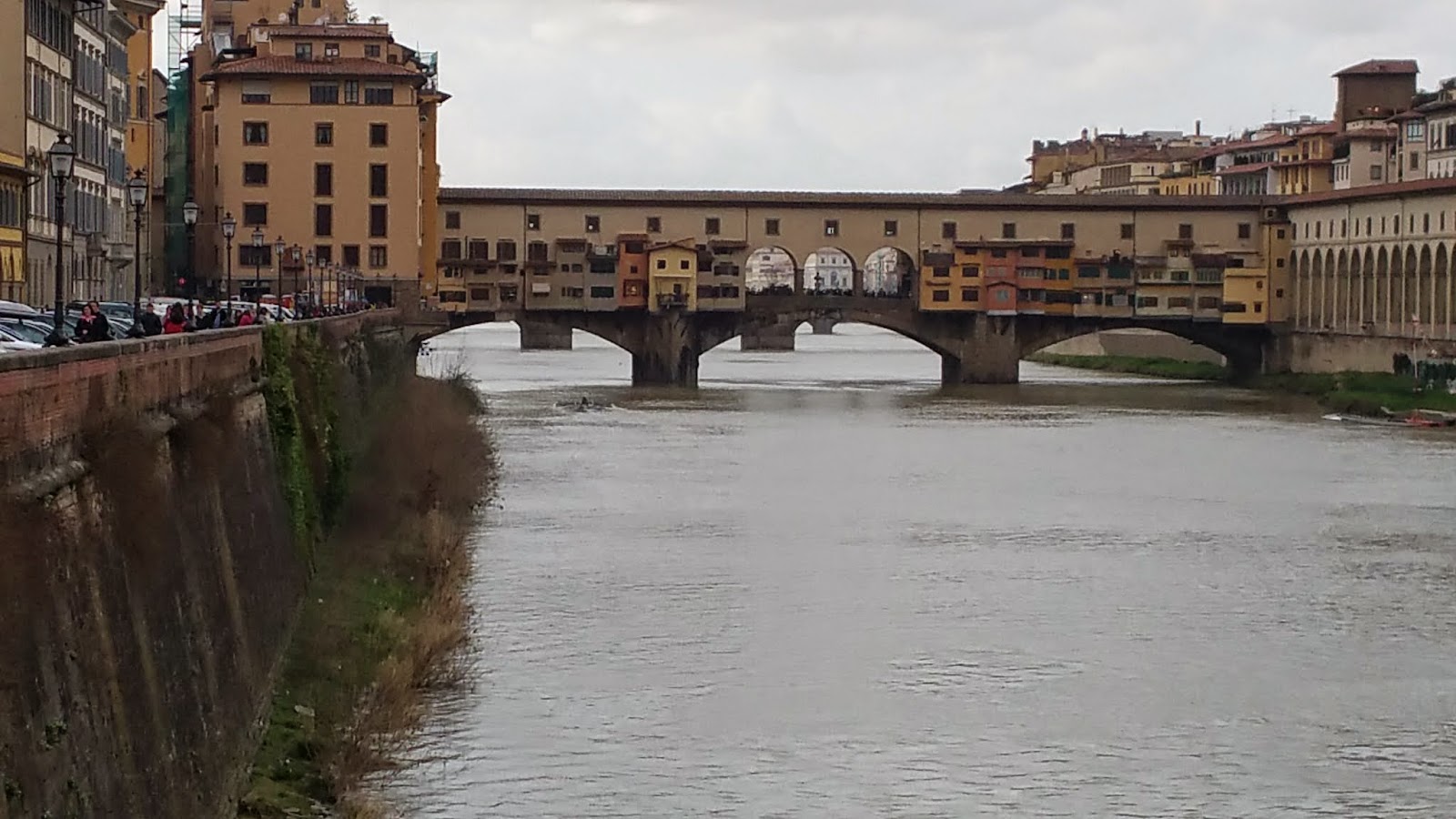 Our first adventure out was to the grocery store by the Ponte Vecchio; a bit pricier than our neighborhood stores in Rome when we were out in the suburbs.  But we were able to pick up the things we need for the next few meals.  It is about a fifteen minute walk and we figure about half a mile.  Yes...the pedometer today shows 3.89 miles.  I made the trip to the store twice because I picked up two bottles of Balsamic Vinegar instead of one and no olive oil...which we needed for our salad. 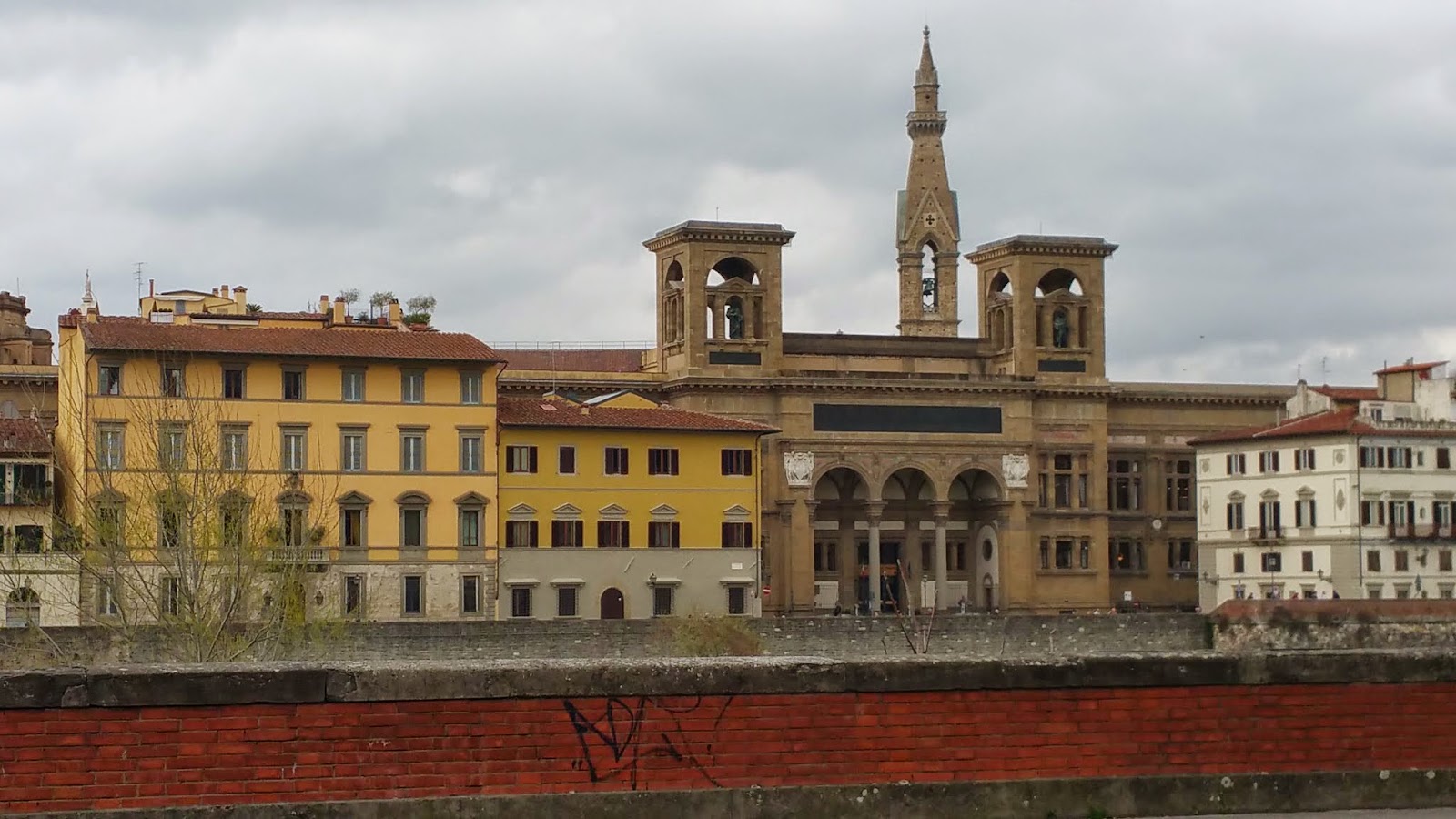 It's been a good day and we so enjoyed our walk to the store along the Arno River with views of the Uffizi Museum, the Basilica of Santa Croce, the Dome of the Duomo and the Tower of Della Signori.  Tomorrow we will cross the bridge and walk some of our memories; it's a few day to just explore this marvelous city.

Those familiar Florentine sights along the Arno look different, beautiful in another way, under gray skies. Are your lodgings as comfortable as they look? I have been looking for a bag like your cross-body bag. Would you mind telling me where it came from? Have a great time in Florence!

So glad you are enjoying the blogs. My brown bag is an old one but I really like the size...I also wear a small bag around my neck under my shirt with passports and extra cash and cards. The small size requires me to also use a small backpack for extra things. When I carry a larger purse I can get everything in the purse but I'm really liking this small bag. Jim purchased the black bag after his wallet was stolen...he really like it. Paid 15 euros for it in Rome. Most of the time he does without a backpack. Martha

I am continually amazed by the amount of information available on this subject. What you presented was well researched and well worded in order to get your stand on this across to all your readers. pnr status