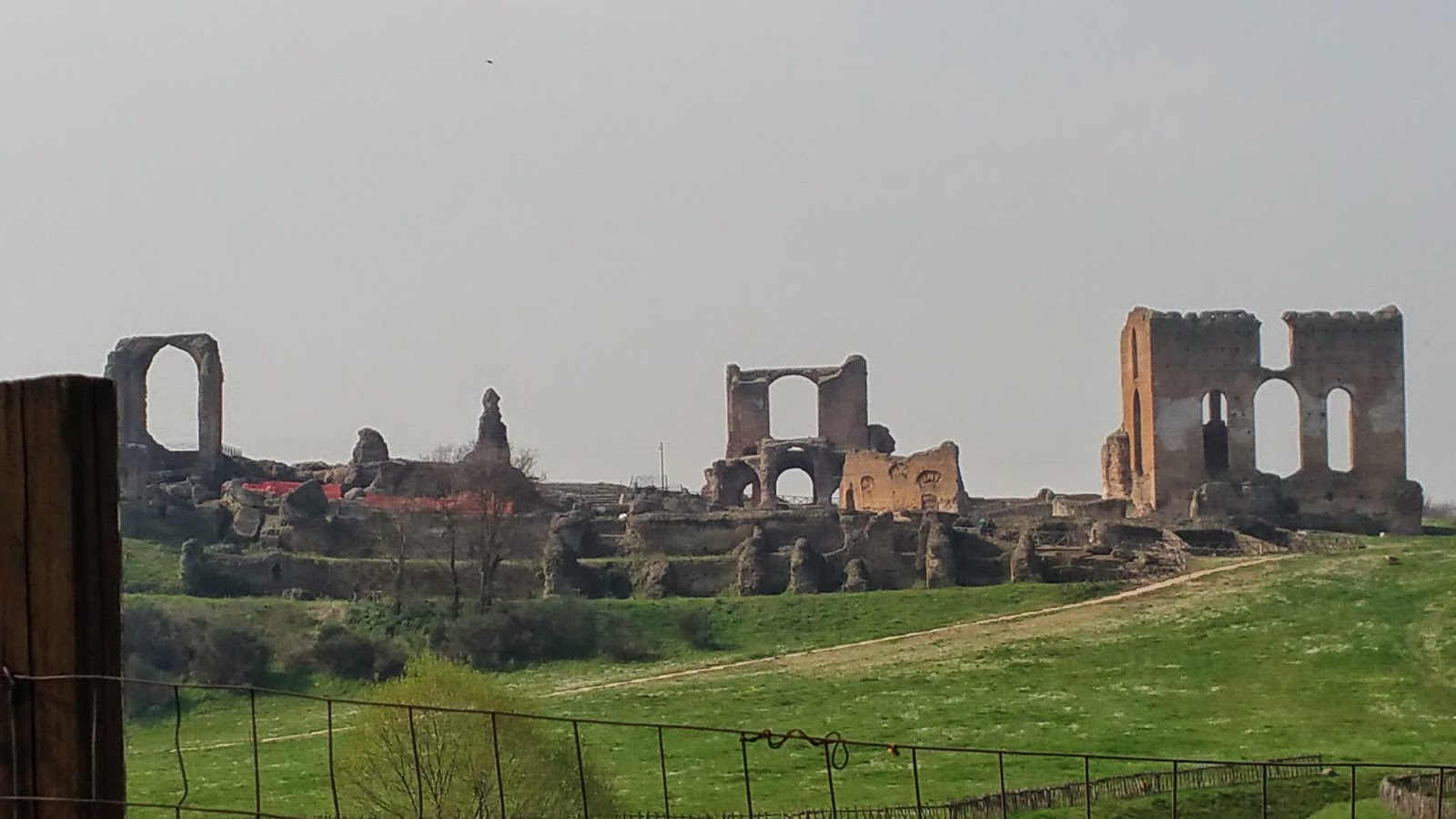 Our day started early and we were on the Metro by 9:30 am heading back out to the area we visited yesterday.  But today we caught a different bus after we got off of the Metro and within about ten minutes arrived at the vast ruins of the ancient Villa dei Quintili  built in the second century by two wealthy brothers by the name of Quintili.  When the ruins were first excavated they were called old Rome because it was so large they were sure that they'd discovered a city. Later it was determined that it was not a city but only a huge suburban home for a wealthy family.   The back of the property is on the Appian Way and is at about the five mile marker from the gates of the walls that surround the old center of Rome. But the entrance is out on the highway serviced by bus # 664 from the Metro A stop at Colli Albani.  You'll know where to get off because you can see the mammoth ruins from the bus. 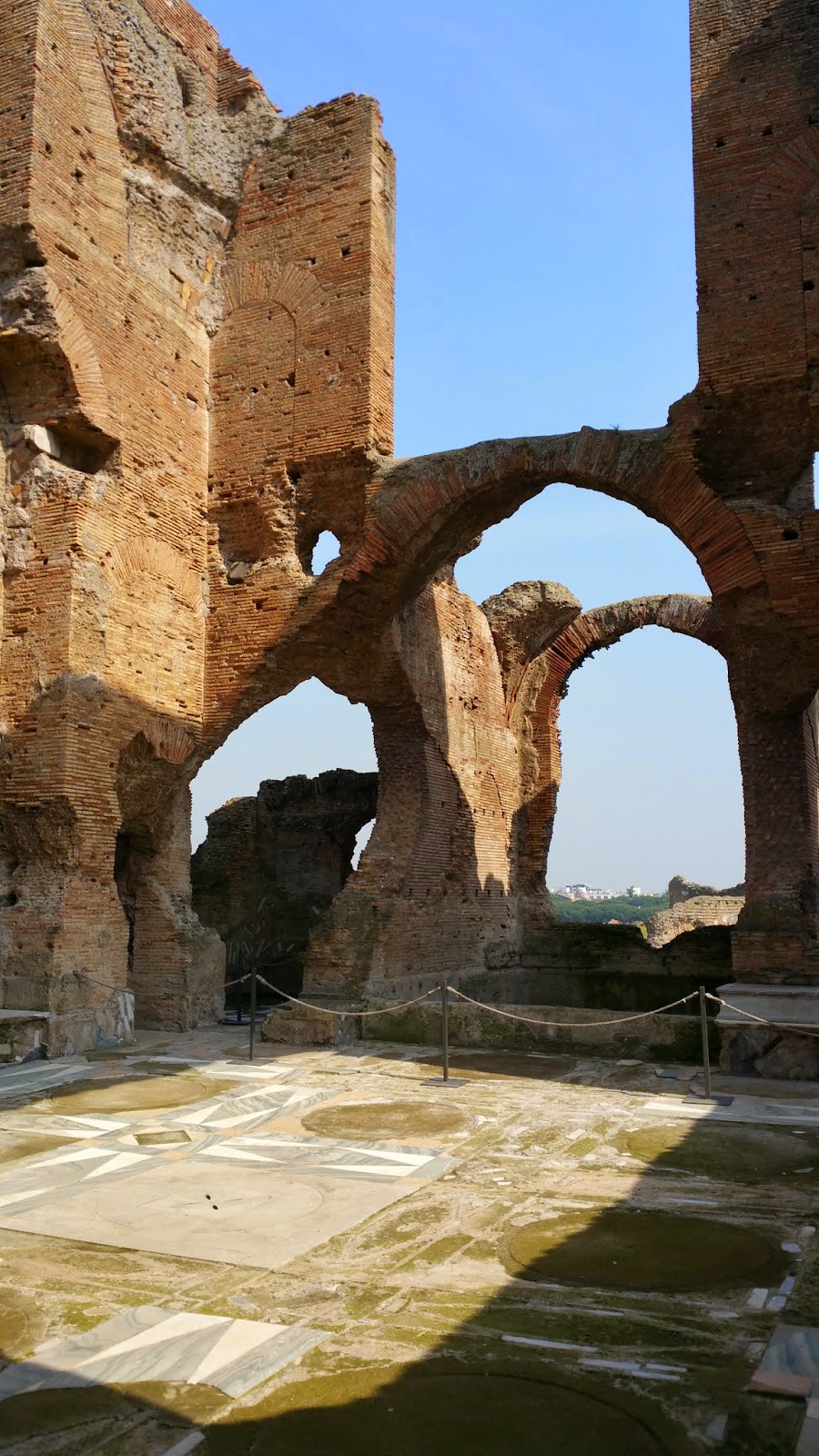 It was a gem of a discovery and very few visitors.  The entrance was only a short walk from the bus stop and there was even a small museum with artifacts that they'd found as they continue to excavate the site.  Well worth the time to go visit.  We were finished and back on bus # 660 by 12:30 and headed back to Colli Albani where we caught the bus # 660 back to the main section of the Appian Way again where we'd been yesterday.  This time we had a ticket in hand for the exploration of the Tomb of Cecila Metella....our three part ticket from yesterday...we found it interesting but glad we hadn't paid a full six euros to enter.

From there we started back towards the Catacombs where the buses stopped.  Along the way we were passing the Circus and Villa of Maxentlus.  We asked how much it cost to go inside and were told because of our age it was FREE!    Enjoyed our visit and it would have been well worth the entry fee if we'd had to pay!  Very interesting and you'll enjoy the photos of a group of young nuns who were also visiting at the same time.  This was the suburban home of the emperor who was eventually defeated by Constantine in A.D. 312.  This former race track was so 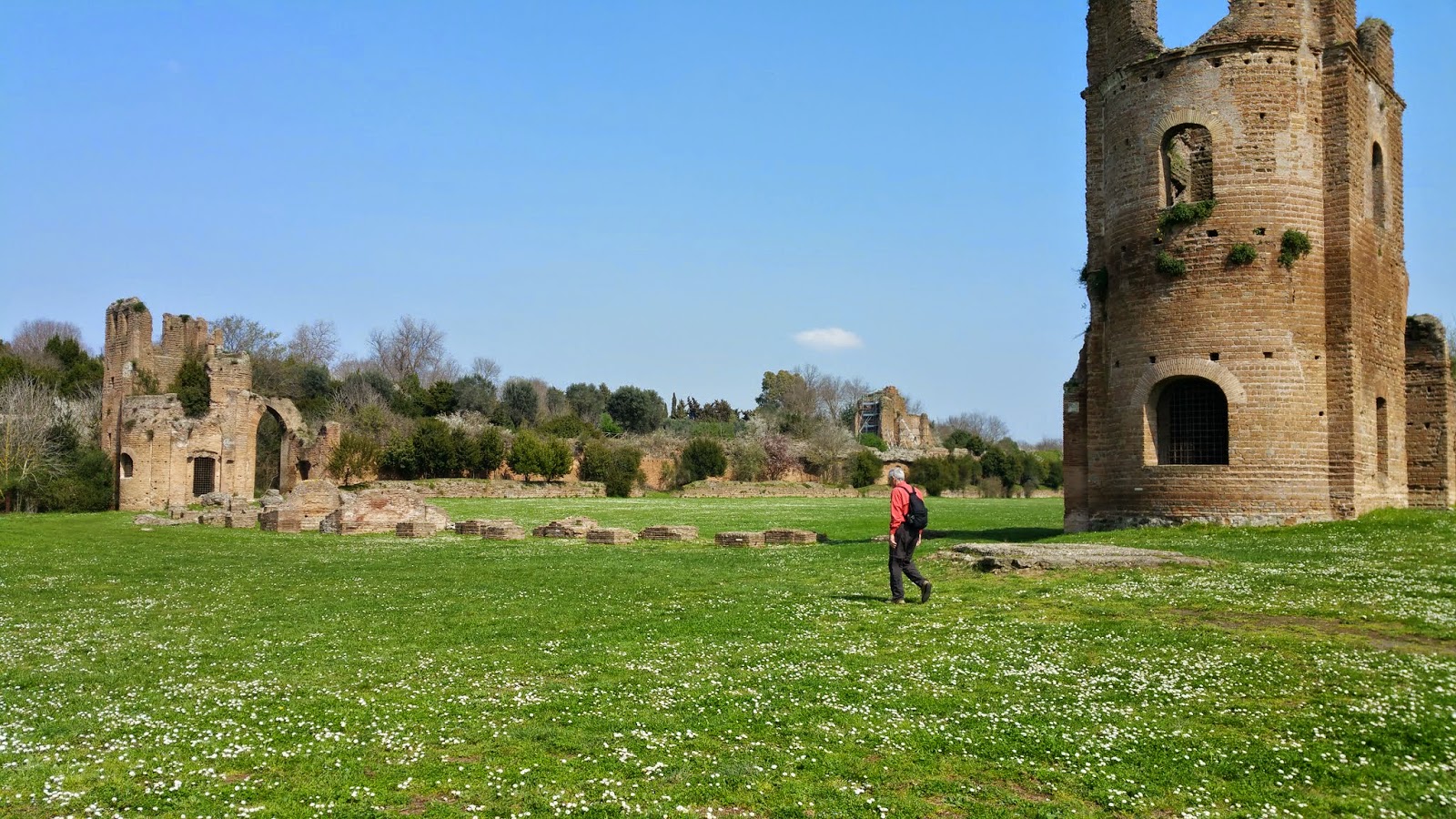 huge that it held about ten thousand fans!  When you look at the photos...at the far end of the 260 yard track is the triumphal arch under which the winner rode to receive his reward.  Very impressive if you use your imagination.   We also visited the circular mausoleum of Maxentius' son, Romulus.

Back to Bus #118 stop in front of the San Sebastiano Catacombs for a long ride back into town.  We arrived about 3 pm at the Porte of St. Paul and the Piramide which was a tomb for a 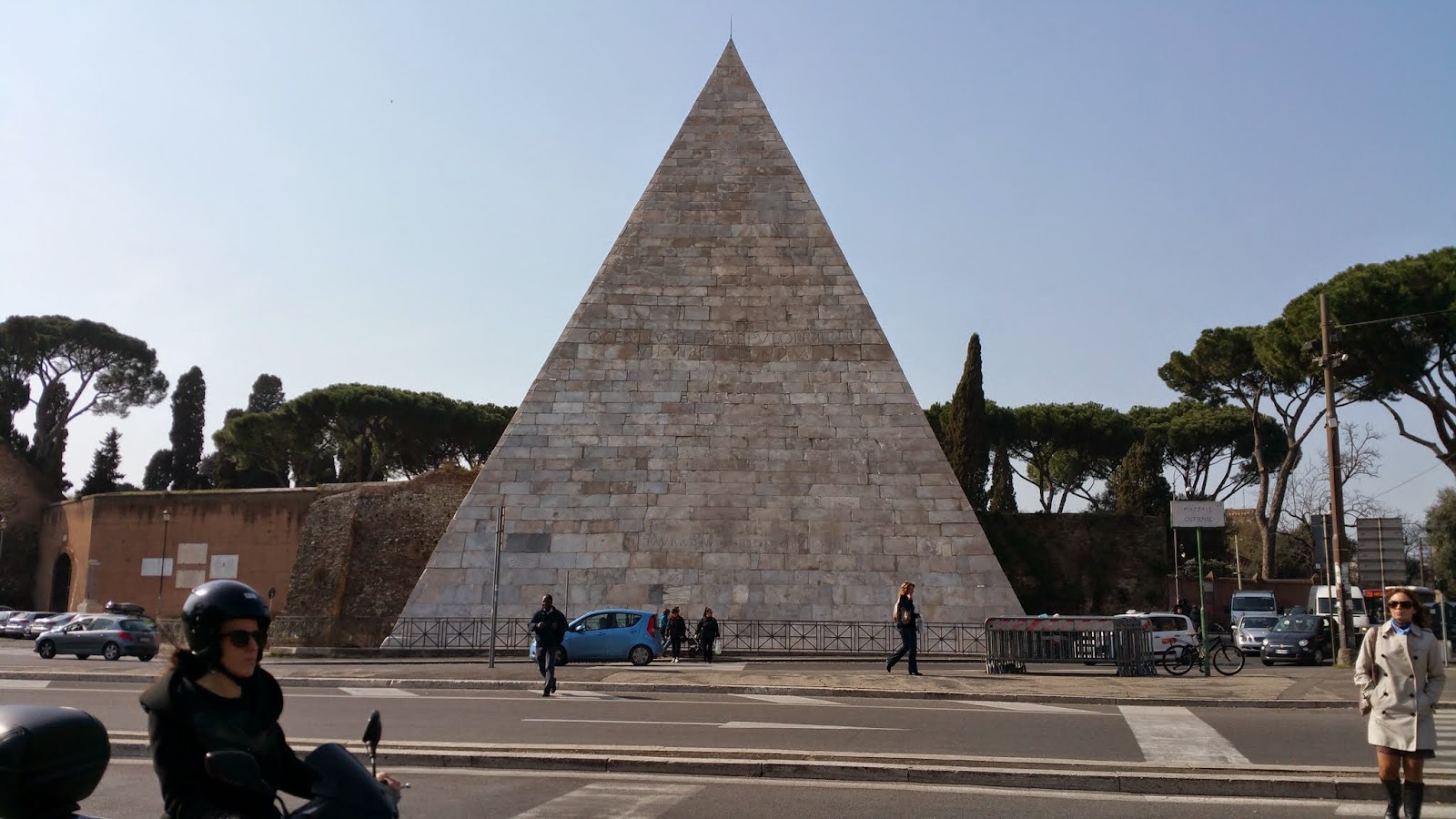 Roman who spent much of his time in Egypt.  It backs up to a cemetery for Protestants...but the sign says it is a cemetery for non-catholics.  Still active today but is home to the graves of many famous people including Keats and Shelley, famous poets who lived in and loved the city of Rome.  Keat's home is located at the foot of the Spanish Steps.

We continued walking along the Tiber River until we reached the bridge at Ponte Sublicio at the southern end of the Trastevere area.  By this time it was nearly four o'clock and we were very tired. 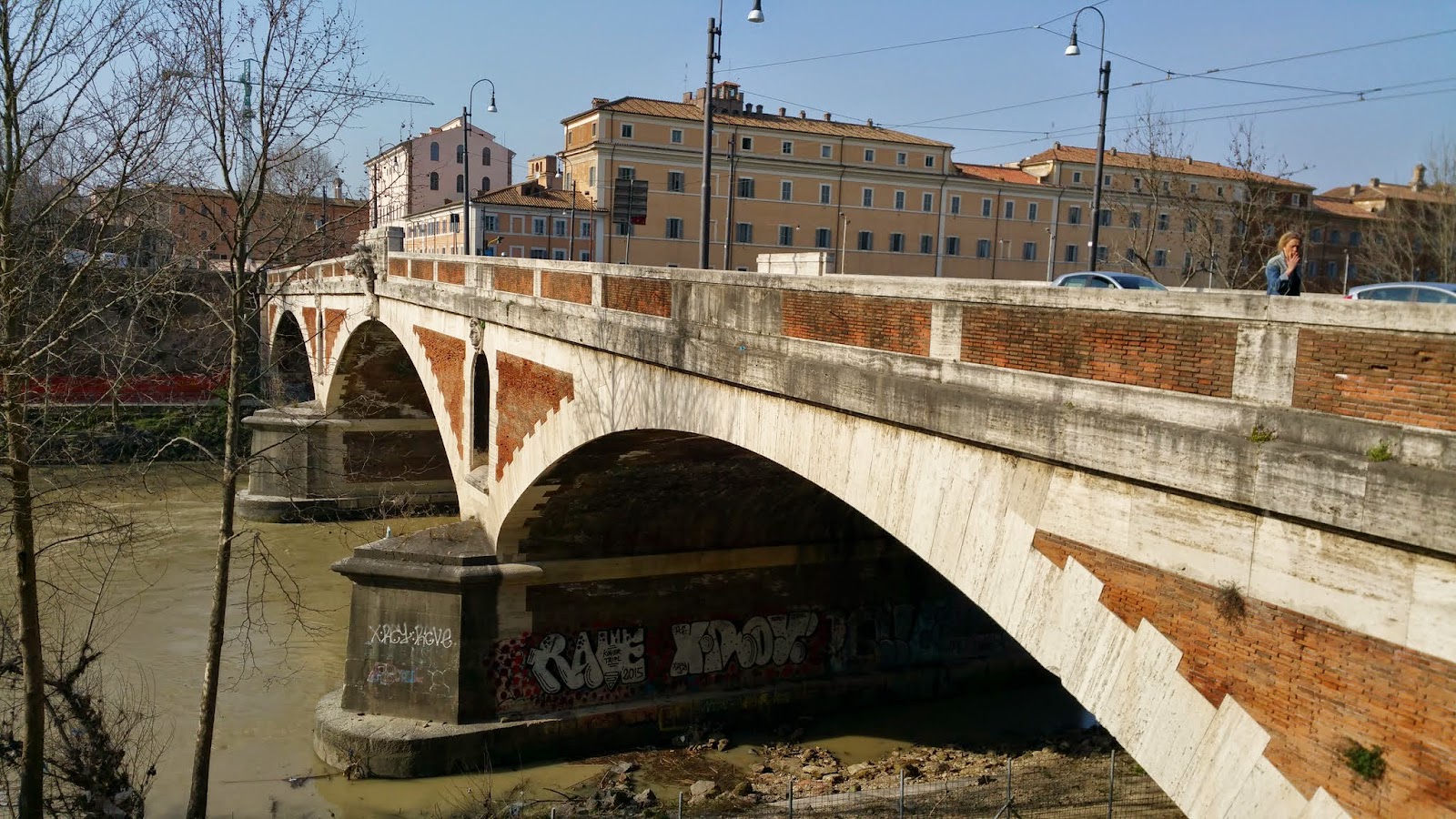 We continued walking until we reached Via de Trastevere where we decided to call it a day and head for home.  Not as easy as it sounds.  We caught a tram that took us back over the river to Piazza Via Venezia.  There we walked several block and found a bus stop for bus # 46 that would take us home.  We just missed a bus and it was over half an hour until the next one arrived.  We stood on that one until it arrived at St. Peter's where we were able to get seats for the rest of the way home.  Thank goodness...we were both exhausted. We walked just under eight miles today according to my cell phone that keeps track of my steps.  By the way...google maps works great and I also have an apt that tells me how soon a bus will arrive at the stop that we're standing at.  T-Mobile has free texting and data when you're in Europe.

Arrived back at the apartment about 5:30 pm.  I trotted off to the grocery store for food supplies.  By 6:30 pm we were back out and headed for the restaurant of the friend of our apartment owner that is only a couple of blocks.  Oops...he was closed tonight...or maybe we were too early??   But we walked on and finally purchased some delicious pizza to go and had dinner at home adding our own wine and salad plus dessert.  A good ending to a full day.  I'm hearing the tap tap of the tiny feet of the children that live upstairs.  We only hear them in the evening and it's kinda fun in a way, as it  reminds us of our grandchildren at home.

Hope that you've enjoyed our journey today.  Here is the link to the photos.