Today we stayed home until nearly noon working on bookkeeping and research; the hours flew by and we suddenly realized that the day was slipping away.  A bit cooler outside but occasional sunshine helped.  Our jackets with sweaters underneath felt good most of the day. 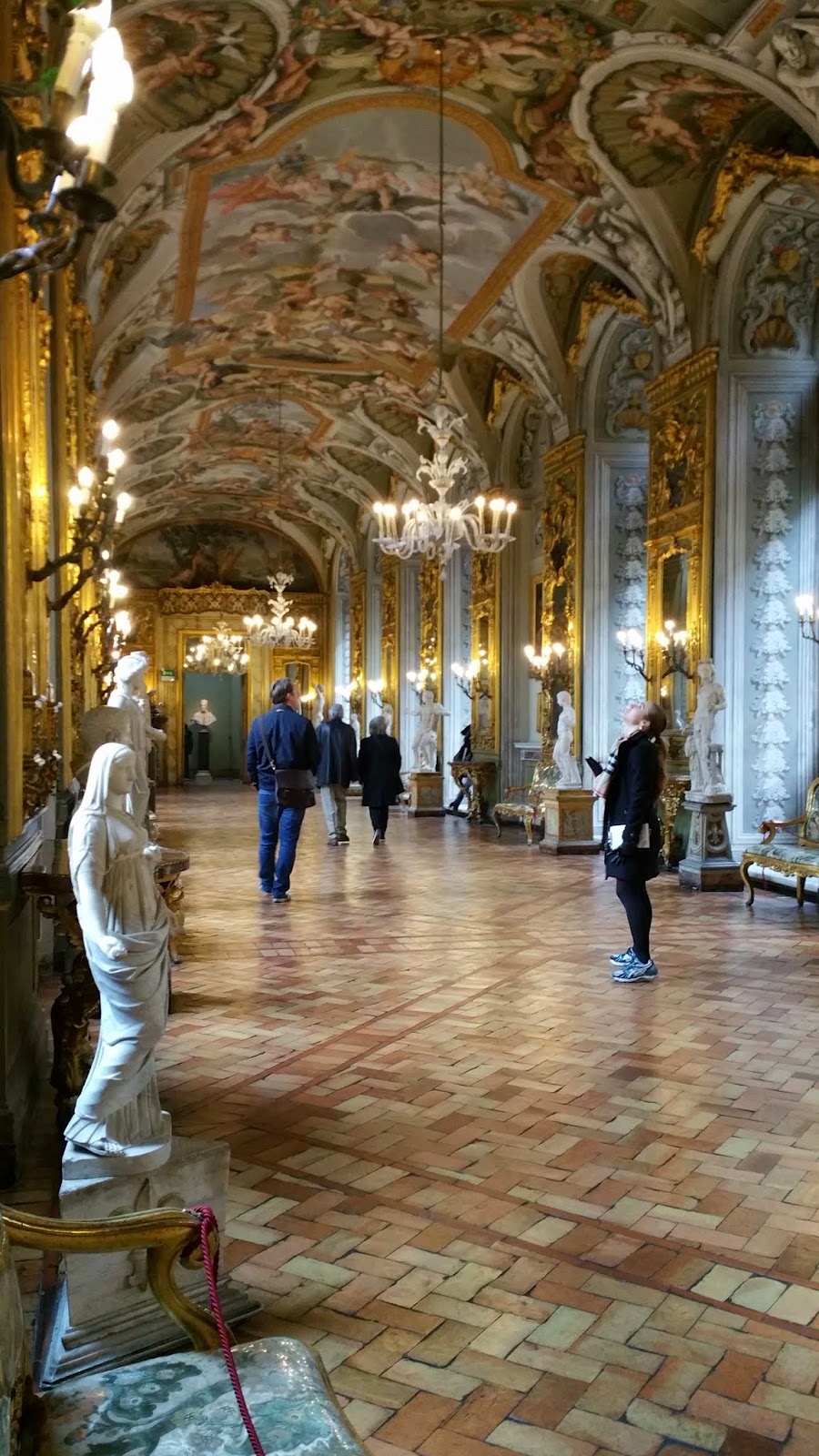 We caught Bus # 46 that took us directly to Piazza Venezia where we spent the majority of the afternoon.  We went left instead of right and ended up walking completely around the Palace of the Pamphilj family before finding the entrance.  This home and several others are still owned by the original family that traces it's growth of wealth back to the Sixteenth Century when an early ancestor was elected Pope and chose the name of Pope Innocent X.   The family has maintained it's wealth and the narrator on the audioguide today was a modern day member of the family.  At one point he spoke of "his mother" did.....

We spent about an hour an a half in the privately owned museum; the admission was 11 euros each but included a very complete audio guide.   I had to pay a fee of 4 euros but was then given a token to wear around my neck and I could snap as many photos as I wanted without flash.  The ceilings were works of art.  There were several Caravaggio paintings; some others with candles I thought were beautiful.  They created their own hall of mirrors; and each room was coordinated with the wall coverings and matching furniture.   What is important about this Palazzo is that the family has not sold off it's great art collection over the centuries as so many other families have. 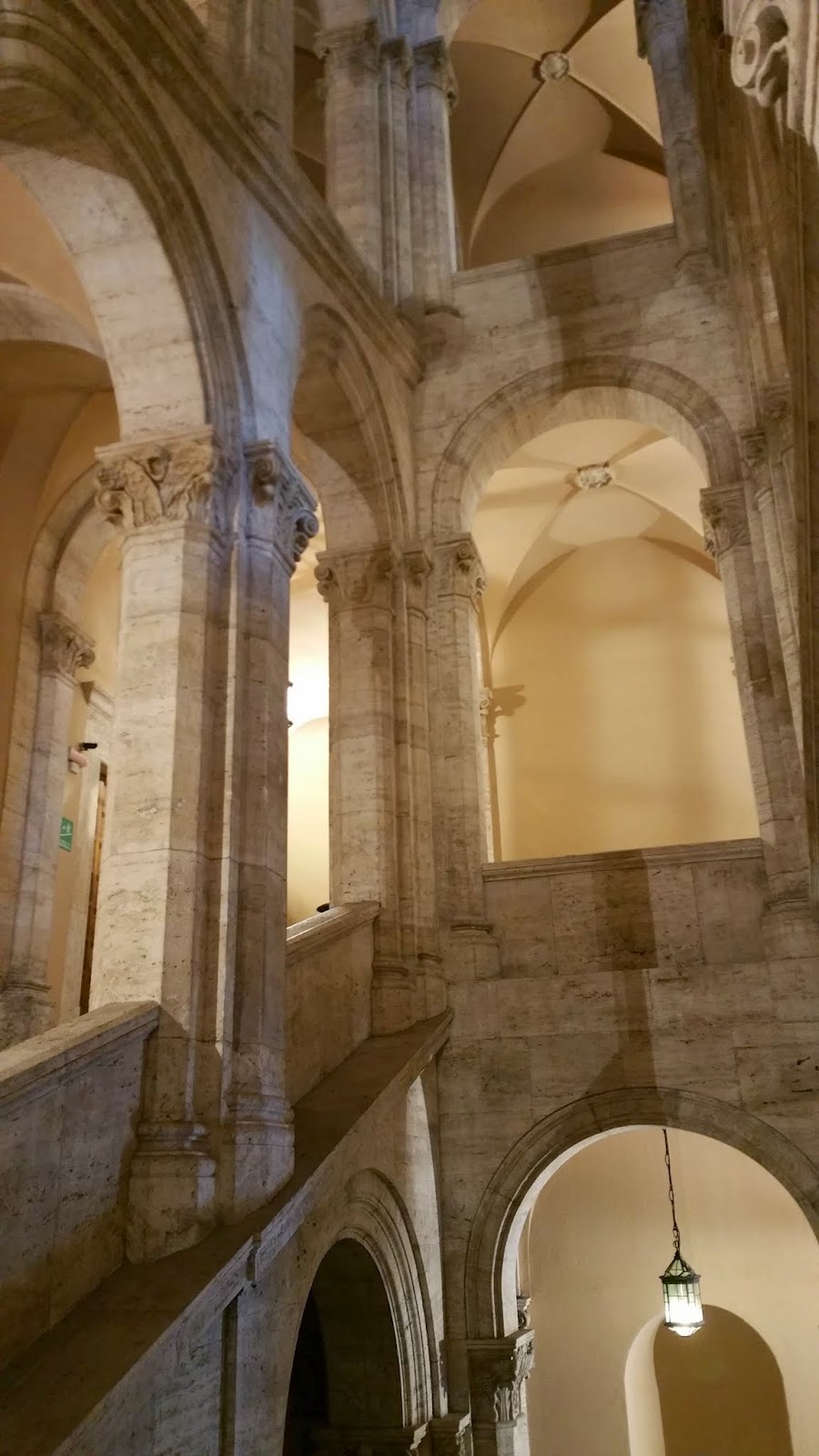 Leaving the museum we walked towards the Victor Emmanuel Monument (known by tourist as the "wedding cake") we passed the Palazzo Venezia and decided to check it out.  The admission price was reasonable...5 euros each....and a classic marble staircase made the decision easy.  The artwork was Medieval  and there were several rooms of china and bronzes.  This is also the same building where Mussolini made his speeches from the balcony that faces the Monument.  A fun hour of walking from room to room.   Heading outside we continued our quest for the steps designed by Michelangelo behind the Victor Emmanuel Monument.

But the steps of the wedding cake drew us in and up we climbed.  On the first level we stopped to take photos of the women soldiers who were standing at attention at the Altar of the Fatherland. Then up more steps and finally into the building.   We found a great display of photos all about the use of dirigibili (hot air ships) during WW I.   Soon we were out the top of the building where we discovered a very modern glass elevator built on the outside of the building where for seven euros you could go to the top of the roof to take photos.   Decided we had enough of a view and 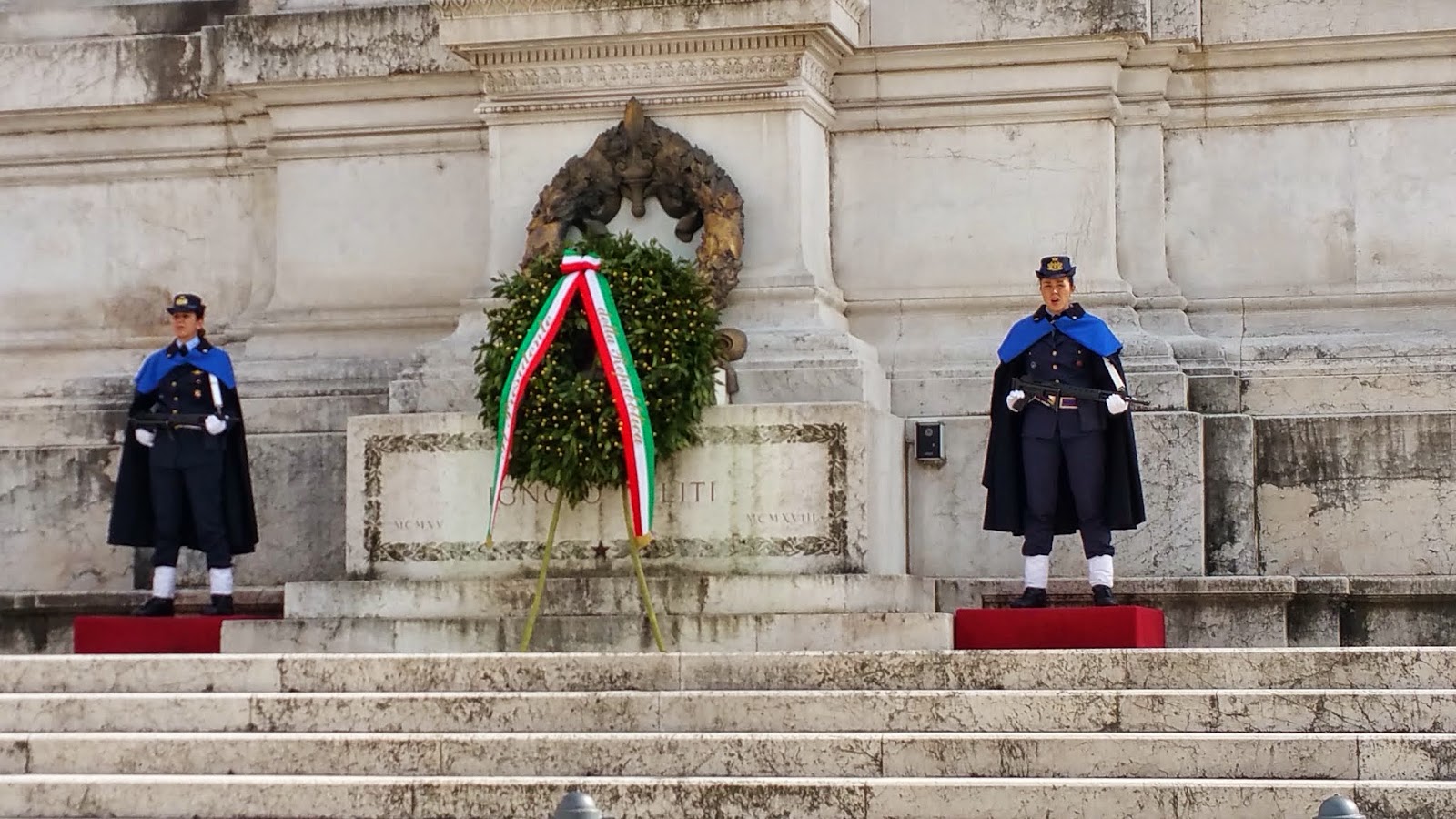 went behind the bell tower of the church that attaches to the monument.  Overlooked the old Roman Forum and ancient Rome...even a view of the Colosseum in the distance.   We entered the church that is known as the Basilica of S. Maria in Aracoeli; beautiful and very old.  Once back outside we walked down the marble steps...counting as we went....120 steps to the bottom.

We decided to save the other steps of Michelangelo for another day and headed to catch a bus that would take us to Termini.  It was about four o'clock by then.  Arrived and walked several blocks to check out the Church of Santa Maria della Victoria that has the Bernini Altar  with the statute of St. Teresa in Ecstasy.  Yep...it was totally covered with restoration going on behind the netting.  But we've seen it several times before so we were actually just wasting some time by checking out a rumor we'd heard from another tourist last week. 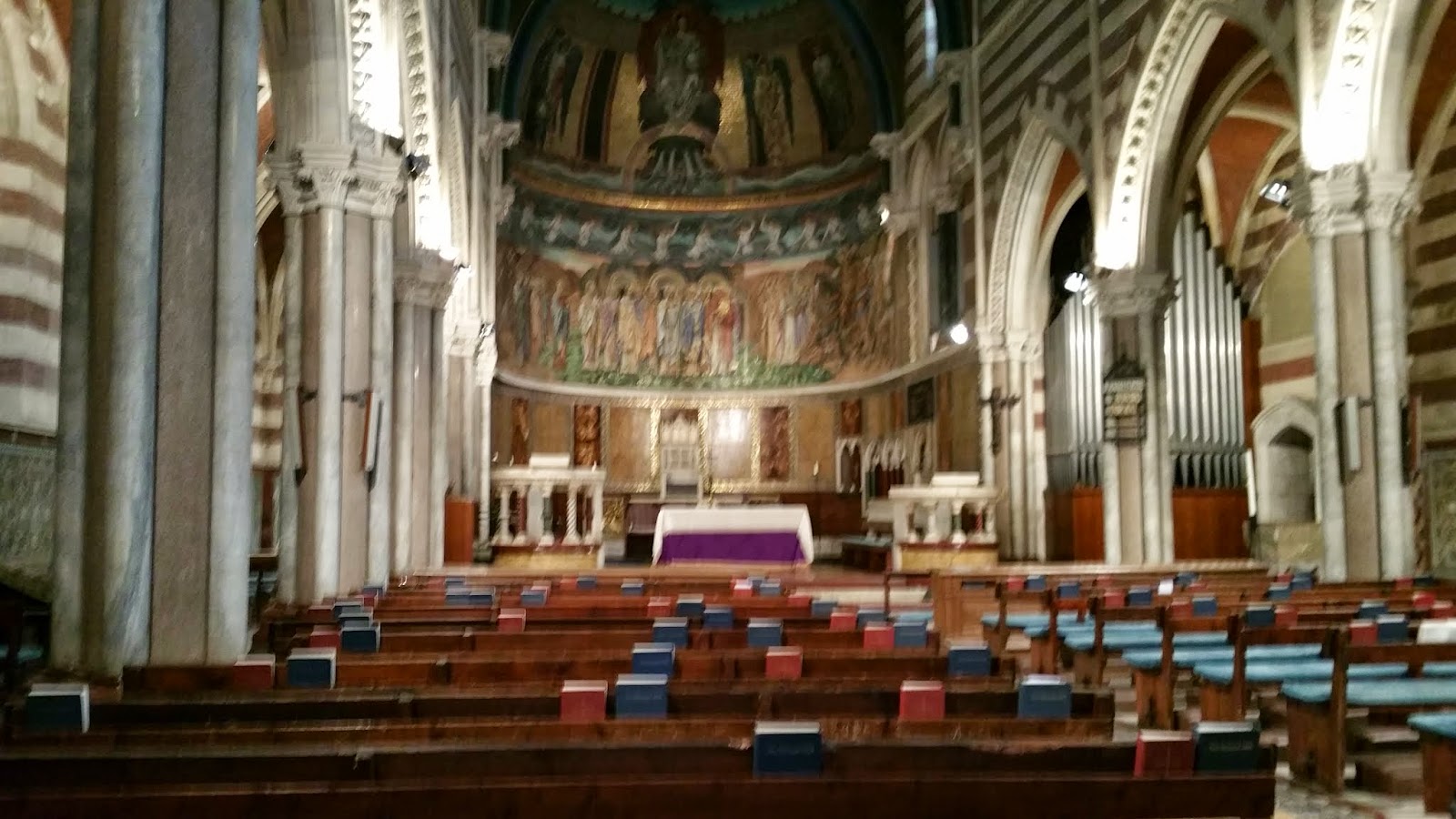 We decided that we would find the local McDonalds and have a burger while we waiting for an hour for the English Mass at 5:45 pm at the same church we went to last Saturday.  It was just around the corner from the Piazza dei Republica.   Crowded but they never asked us to leave and we stayed for an hour.  Afterwards we walked a block to take photos of the beautiful Episcopal Church.  I'd seen it in 2013 but it was closed.  A beautiful interior made the extra block worthwhile.

Soon we were over the Piazza, having to make our way past the myriad of equipment that we think is being set up for the Rome Marathon that is being run tomorrow.   A beautiful Mass with a young priest who gave the homely talking about how his mother told him at the age of eighteen that no matter what he did he would always find a welcome at home as he went off to college.  It was a good way to end the week.

Crossed over the street to the Metro stop and arrived home before eight o'clock.  A clarification on our location.  I've discovered on Google Maps that we are actually south west of the Vatican.  The street that we live on starts uphill on the northwest side of the Vatican but then it wraps around the back of the Vatican.  Another good day and I hope that you've also enjoyed our journey.  Here is the link to the photos.