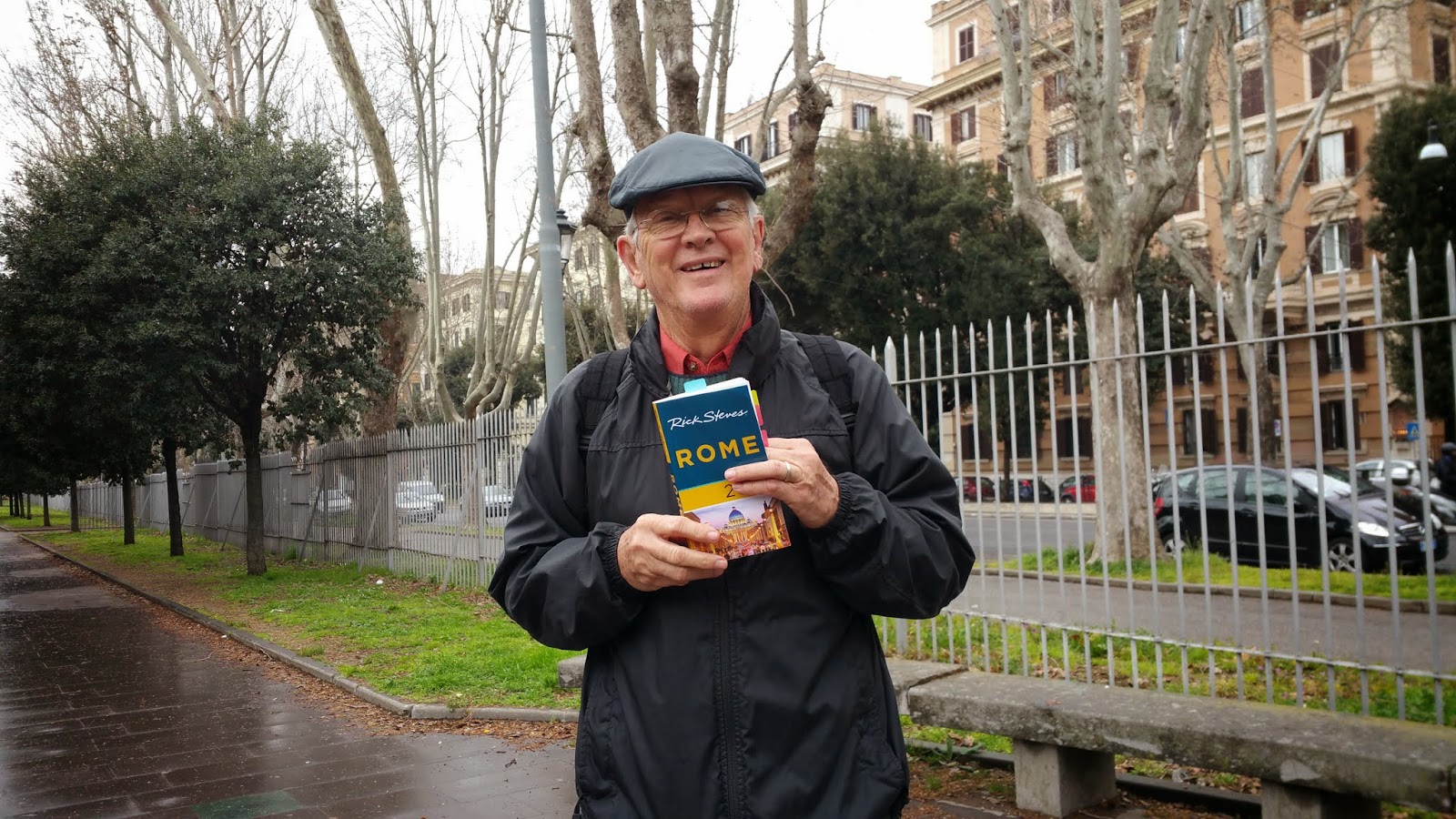 Did we miss a day....yes and no....we started out on Tuesday for a grand day even though it was raining lightly.  I screwed up and took us out of the walls to the Metro Station Vittorio Emanuele thinking that it was the Victor Emmanuel Monument; where it was an easy walk to our destination.  Once out of the station...we were totally lost.  We should have gotten back on the Metro and returned to an area we were familiar with but this very nicely dress Italian man insisted he could get us to our destination by bus. 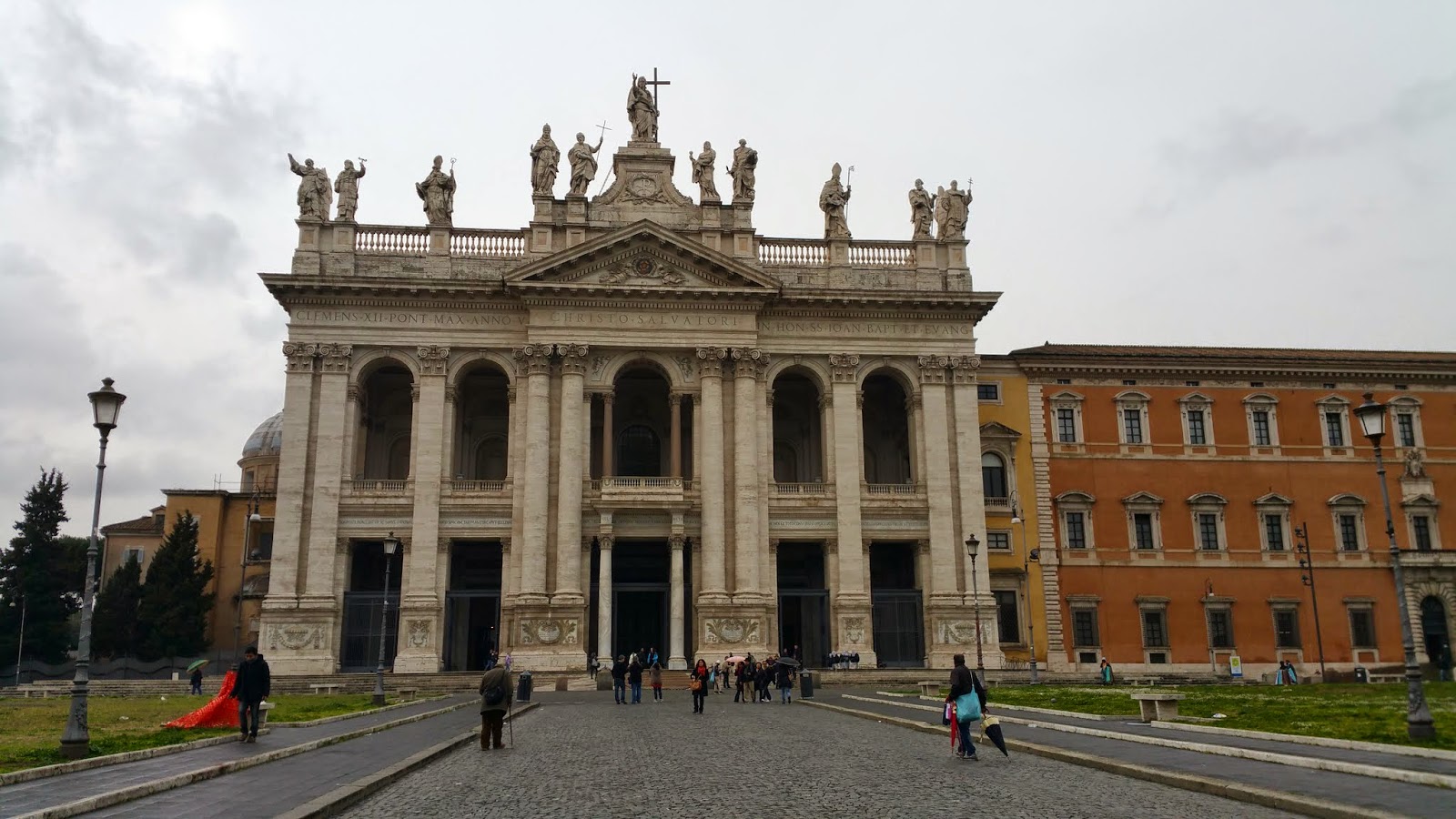 Biggest mistake was not trusting our instincts and not listening to the Italian lady who spoke limited English about getting back on the Metro.  But, he kept insisting that we could get there faster by the bus with him.  Sure enough...he waited until a really crowded bus came and we went with him like lambs to the slaughter.  At the next stop he got off rather hurriedly and pointed to the direction he said we should go.  We were still lost but things looked familiar to me from two years ago as I recognized the walls out near San Giovanni in Laterano Church.

So we walked a few blocks, entered the church and came out near the Obelisk in the square and finally caught a bus towards Via Venezia, another familiar name.  At this stage we decided to get a bus to somewhere, we knew not where and that's when Jim discovered both his wallet and cell phone were missing from the zipper pockets of his jacket!  Now we knew why the man left us in such a hurry and why he was so upset when the lady tried to get us to go back to the Metro. 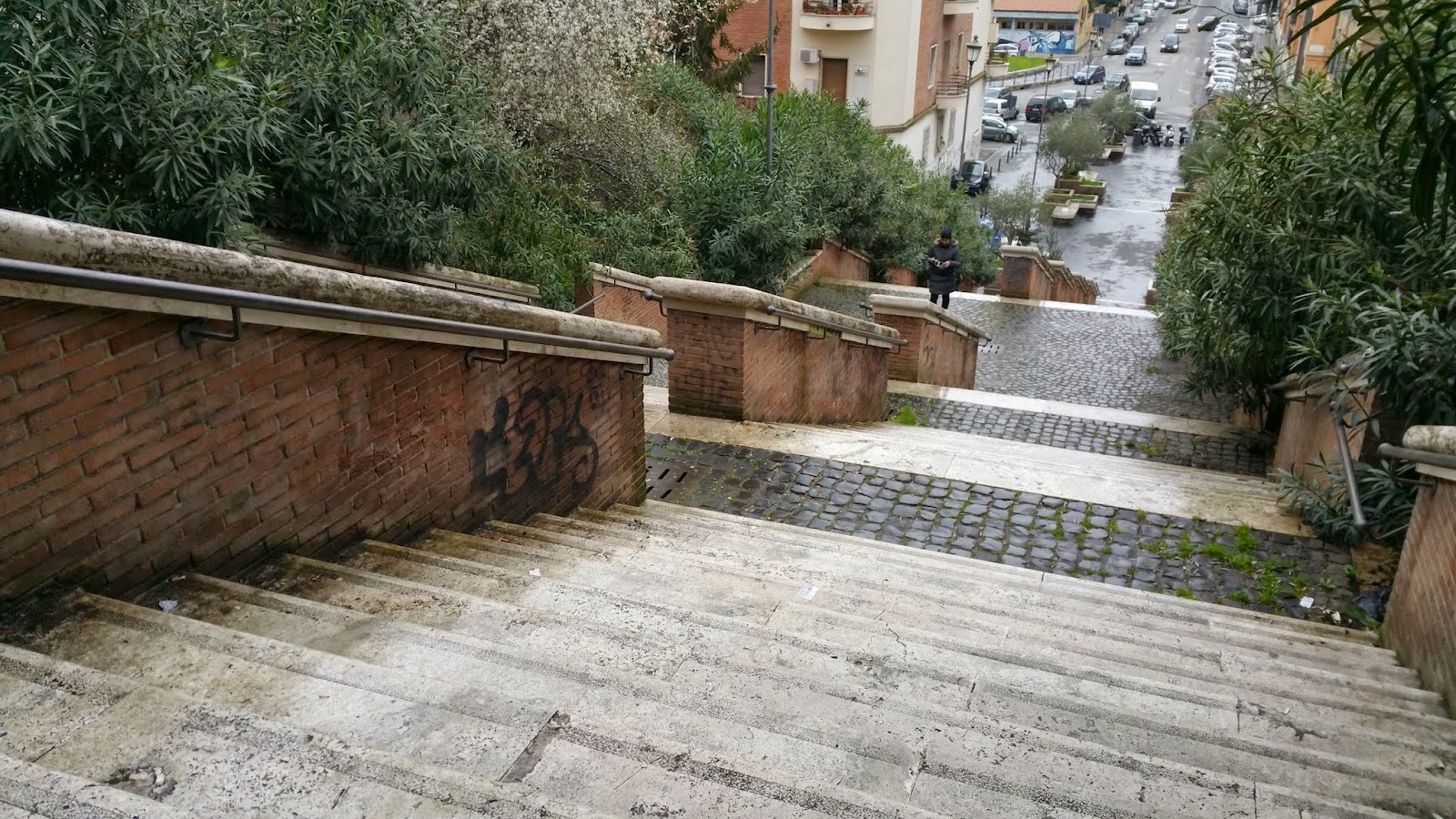 At that point, we forgot all about going to pick up our tickets for the Wednesday audience with the Pope.  Jim has a history of heart atrial fibrillation and we were concerned about the trauma creating a health problem for him.  I talked Jim into getting a taxi cab to take us to the entry to the Vatican Museum...negotiated a ride for eight euros...from there we caught our number 49 bus back to the apartment.   We actually walked a bit which was good for us to the next stop and along the way took a photo of the stairway that we'd climbed on Saturday when we got lost finding our metro stop.

Jim was concerned about his Metro/Bus ticket that was in his wallet and I said just get on like you have your ticket in your pocket.  You only have to put an all day pass in once a day.  If for some reason an inspector gets on the bus....you will just have to realize for the first time that your wallet has been stolen.  But, just as I thought...no one asked to see his ticket.

Back in the apartment much earlier than planned, we started the process of cancelling credit cards, etc. that happens when your wallet is stolen.  We contacted our son-in-law in the USA and he took care of turning the IPhone into a "brick" and hopefully worthless to the person who took it.  If they sign on to the Internet with it...it will take a photo of the location and send it to us which we can in turn give to the police.  But, that will probably never happen.   We had no ideal how to do this but figured our son-in-law did and sure enough he took care of it for us.  Using our International Skype we first contacted the bank and then the credit card companies.  We also filled a report with Equifax.com....no charge...and they noticed the other two credit reporting companies for us.  It's good for 90 days.  And so ended our day...we ate dinner and went to bed early.

We were up early this morning on Wednesday, and by 10 am we were out the door.  First stop was at the TIM Store to activate the Italian  cell phone that I'd purchased in 2013.  Now Jim has that phone with him in case we get separated.   I have to teach him how to use it this evening. 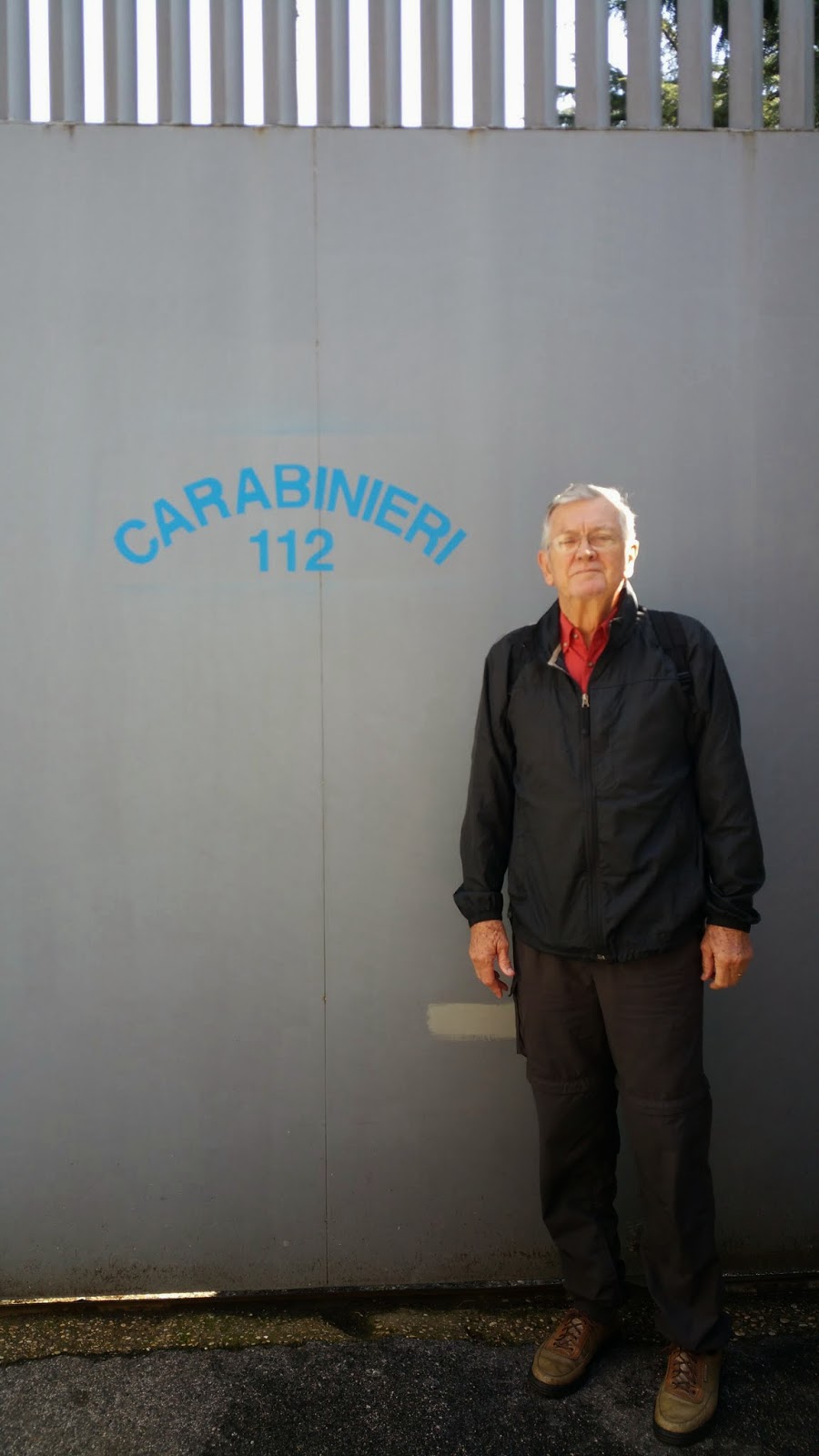 Next we went to the local police station following the directions that our landlord had given to us when we notified him of the problem.  Before we left the apartment this morning, I went into google translate and typed the story and information about what had happened to us along with personal information.  I copied the Italian translation and pasted it into an email to myself.  When we arrived at the police station...only a couple of blocks from the apartment...I told them I had a translation on my cell phone...opened up the email and they were delighted.  The official report was made and we have a copy of it with us to take home just in case there are problems.  By this time is was noon.

A short stop back at the apartment and we were on our way on bus 64 to Piazza Venezia...where we'd gotten the taxi cab yesterday.  We were back on schedule.  I knew that we could enter the old Rome on the tiny streets from here.  We walked a few blocks the wrong way at first but soon Jim turned us around...fyi...he has a sense of freedom today not worrying about his pockets...and we were at the Gesu Church.  Oops...it was closing for lunch as we entered and we were gently but firmly escorted to the door and told to come back at 4 pm.  Well...cross that one off of our list.  Back on the street we headed in towards the Pantheon; stopping first at the Santa Maria Sopra Minerva church that has the elephant and the obelisk in front of it.  Inside we found the body of St. Catherine under the main altar...her head is buried in Siena, Italy.  From there we walked to the French Church of San Luigi...it also was closed for lunch until three o'clock. 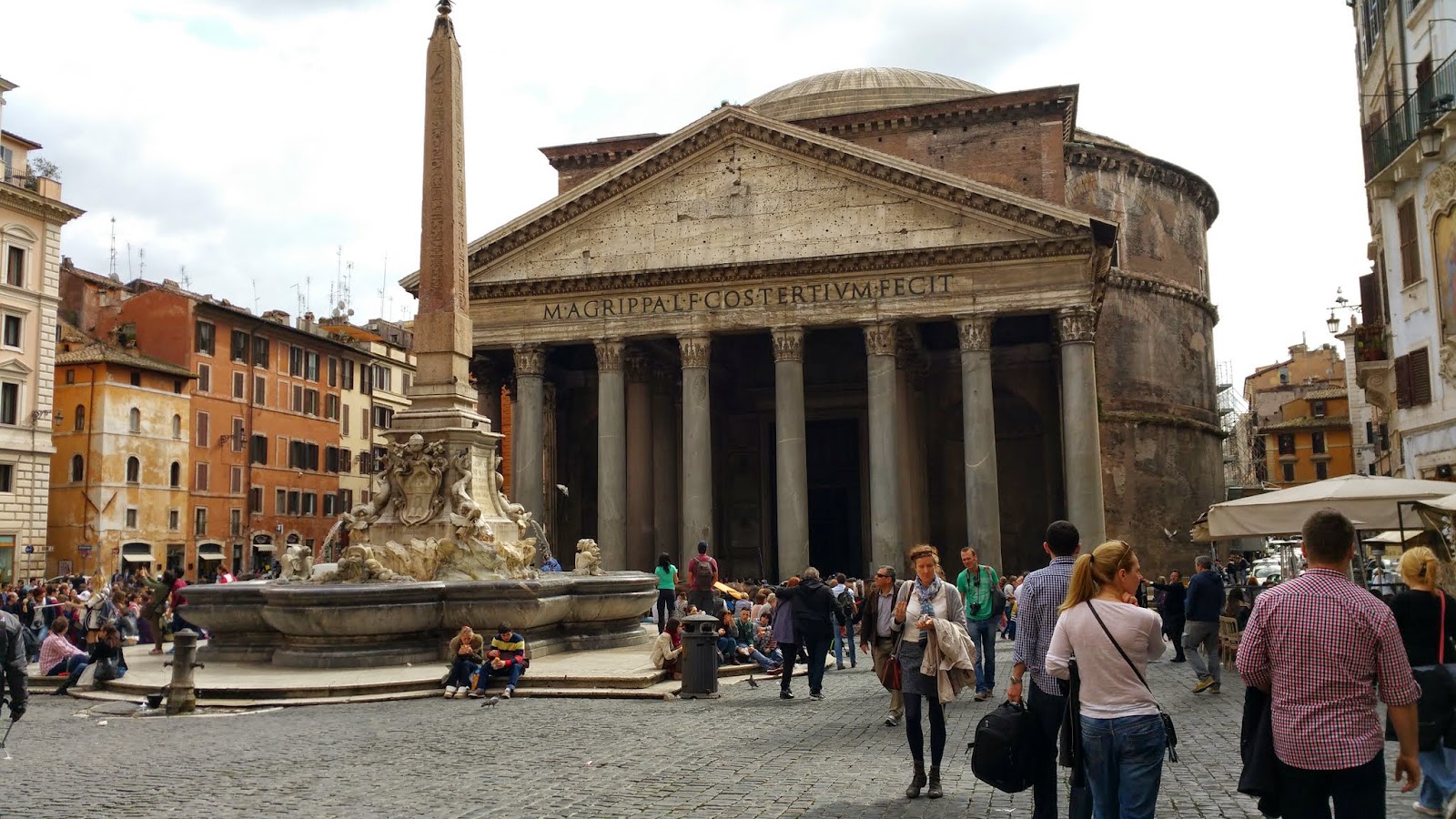 Change of plans we walked back towards the Pantheon and along the way entered the church of St. Eustachio...they were just finishing up from feeding the homeless so we didn't stay long.  And we were on our way to the Jesuit Church of San Ignazio.  It has stunning art throughout, the ceiling looks like it belongs in the Sistine Chapel.

Then  we headed back to the French church...it has the paintings of St. Matthew by Caravaggio.  Oops...it was still closed.  So we walked a few blocks over by the Parliament building to one of the more famous places to get gelato (ice cream) known at Giolitti.   Very reasonable and good.  We each had a double scoop...the smallest they serve...and finished them by the time we arrived back at the french church that was now open! 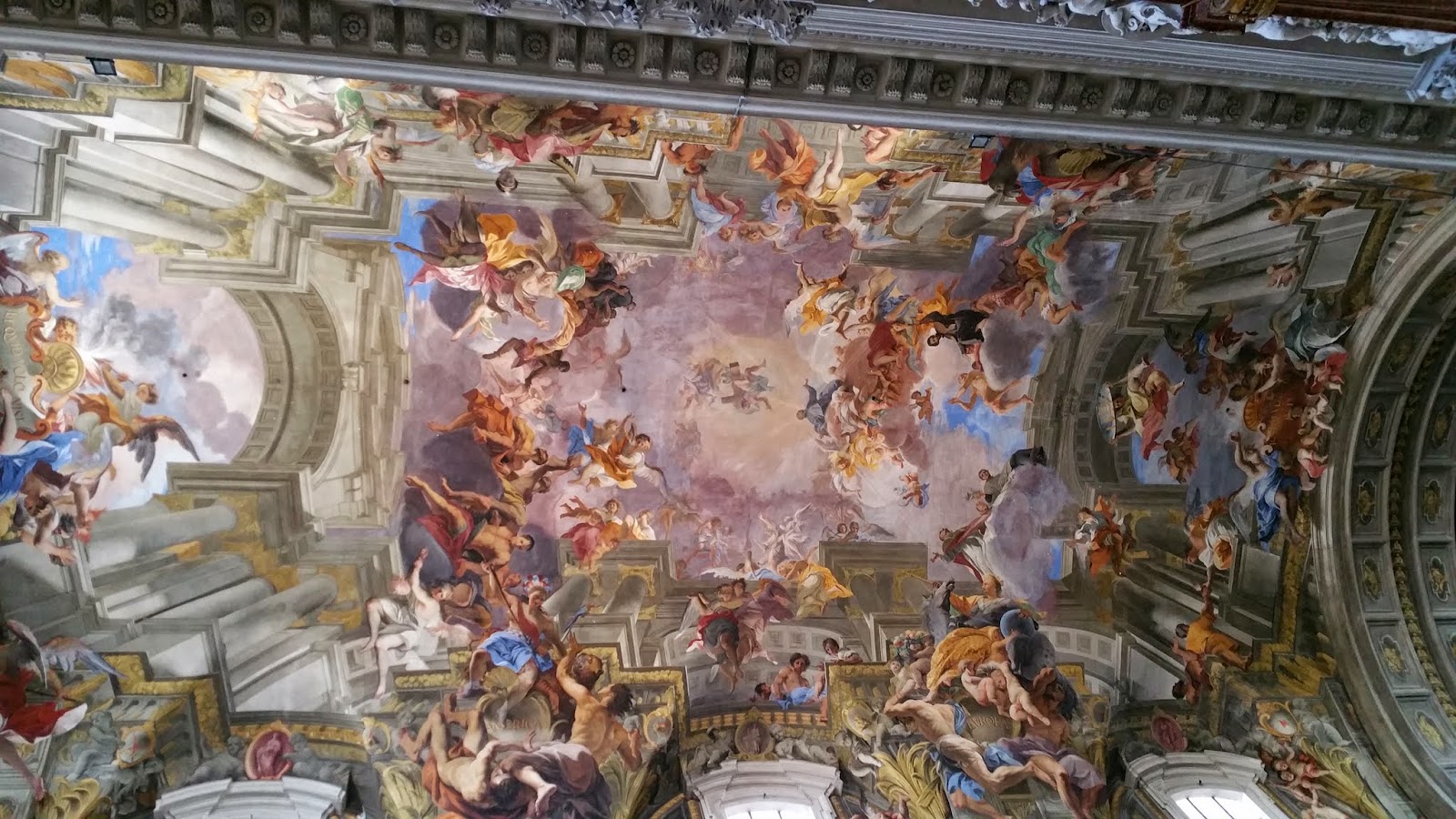 Our feet were very tired by now as it was after 4 pm.  But we started walking towards Trevi Fountain.  When we arrived it was surrounded by glass walls...they are restoring it.  Not what we wanted to see but took a few photos anyway.  I guess I'll have to toss that coin in another fountain to make sure that we come back to Rome someday.   Our goal was to go to Piazza del Popolo so we started walking towards Spanish Steps...Spanga.

When we reached the large street of Via del Tritone we decided to hop a bus...we got engaged in conversation with a wonderful fellow from Pakistan as we passed several Metro Stops.  Soon we didn't see any more Metro stops and when we asked where we were going...oops...time to get off and make new plans.  We eventually found a bus heading towards Termini Station...just before it arrived we got off and entered the Metro at the Republica Station (across from the place we attended Mass on Saturday evening) and we finally knew where we were.

Soon we were at Flaminio Station, hopped off and walked across the large piazza to the church we wee looking for in Piazza del Popolo.....yep....more Caravaggio paintings in the Church of Santa Maria del Popolo that is right next to the arch where you enter the Piazza.

Back on the Metro and home in minutes.  We made a quick trip to the grocery store...we're eating on about ten euros a day by cooking in the apartment.   Good meals including desserts and wine!   It was six o'clock when we reached home.  A good day of sightseeing.  For those that count steps, my cell phone said that we'd walked 15,293 steps today.

I hope you've enjoyed this rather long journal of our past two days. The photos are loading slowly so will posr and add the rest of the photos to the web album tomorrow.   Here is the link for the picasa web photos if you don't see the slide show playing below.

Glad to hear you are recovering from this unfortunate incident. Enjoying your blogs.