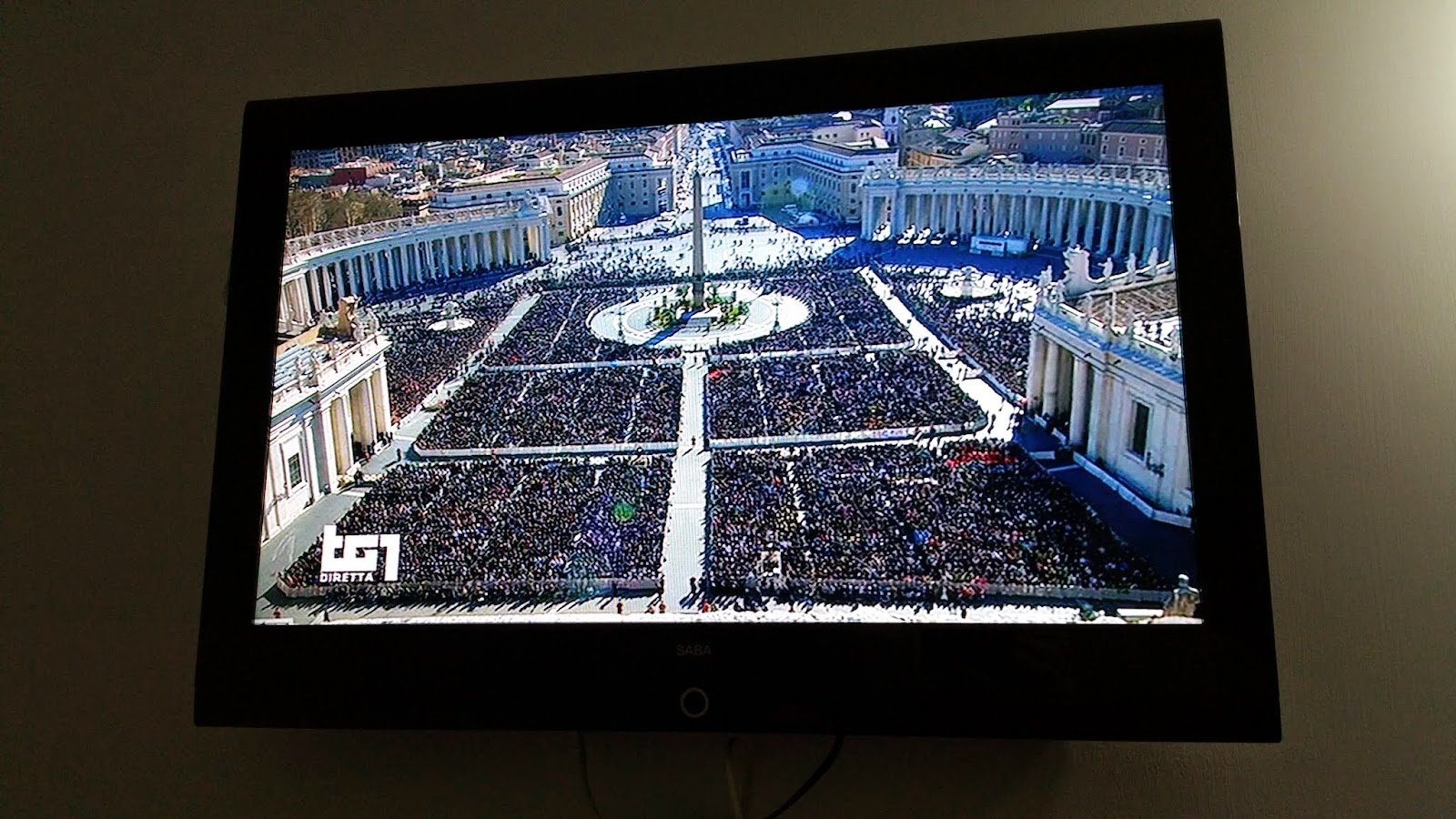 We spent most of the morning at home relaxing and watching Pope Francis at St. Peter's for the Palm Sunday services.  The pope and all of the multitude of Cardinals were dressed alike in red garments for the reading of the Passion and the passing out of palms and olive branches.  I got some great photos off of the television again.

About 11 am I went to the bus stop and waited for half an hour before a bus arrived that took me down to St. Peters.  The program was still going on and Pope Francis was in his popemobile 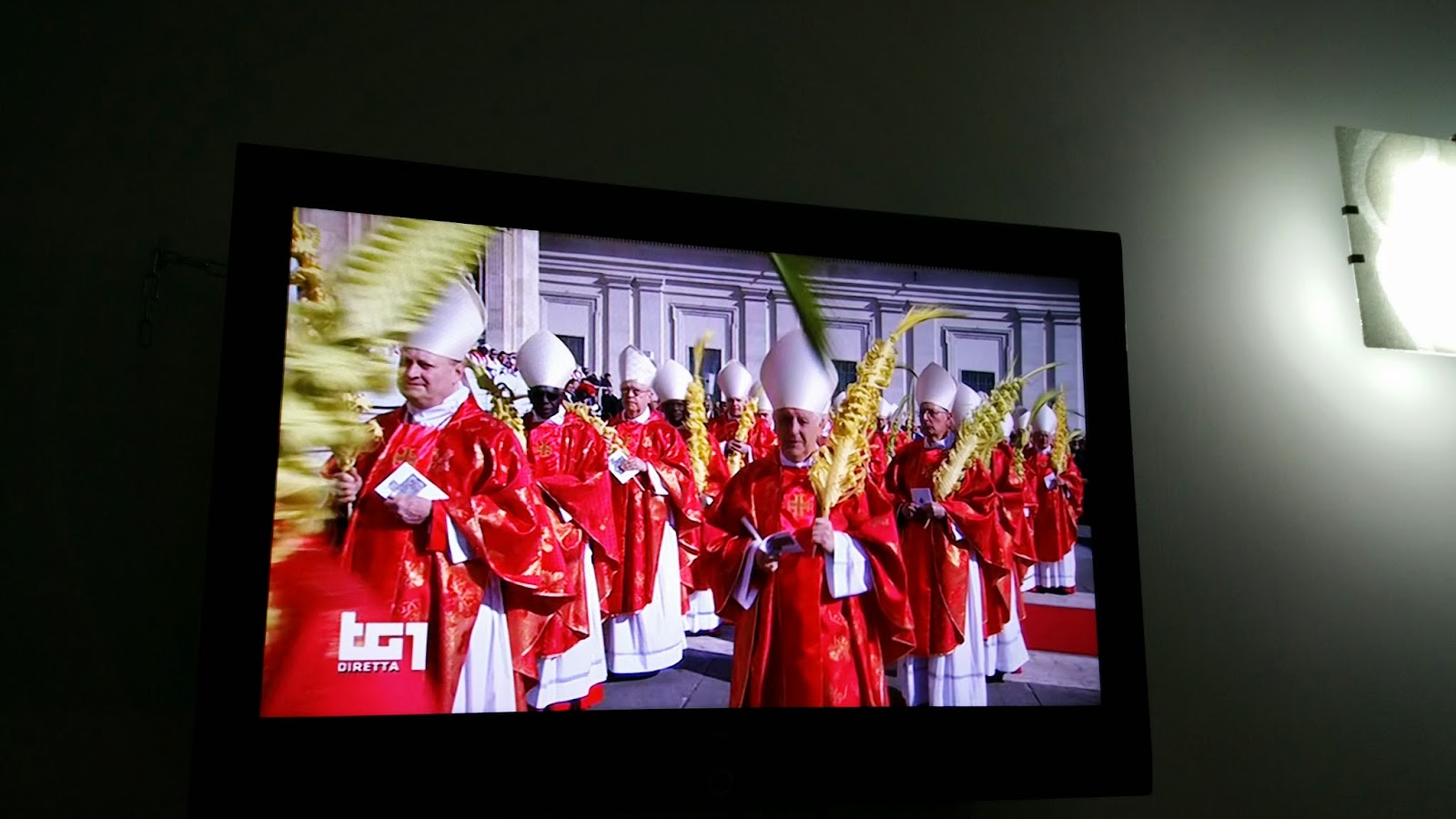 making the rounds through the crowds.  I had to go through security but didn't need a ticket by that time.  I carefully moved between the crowds and worked my way over to the nearest aisle for a better view.  The pope had already passed this area so people were willing to let me get near the rails.  It was fun being in the crowds again bringing back memories of years past when I was here during Easter week.  Once I was even up on the stage and another time in the very front row.  Those seats took some very special tickets. 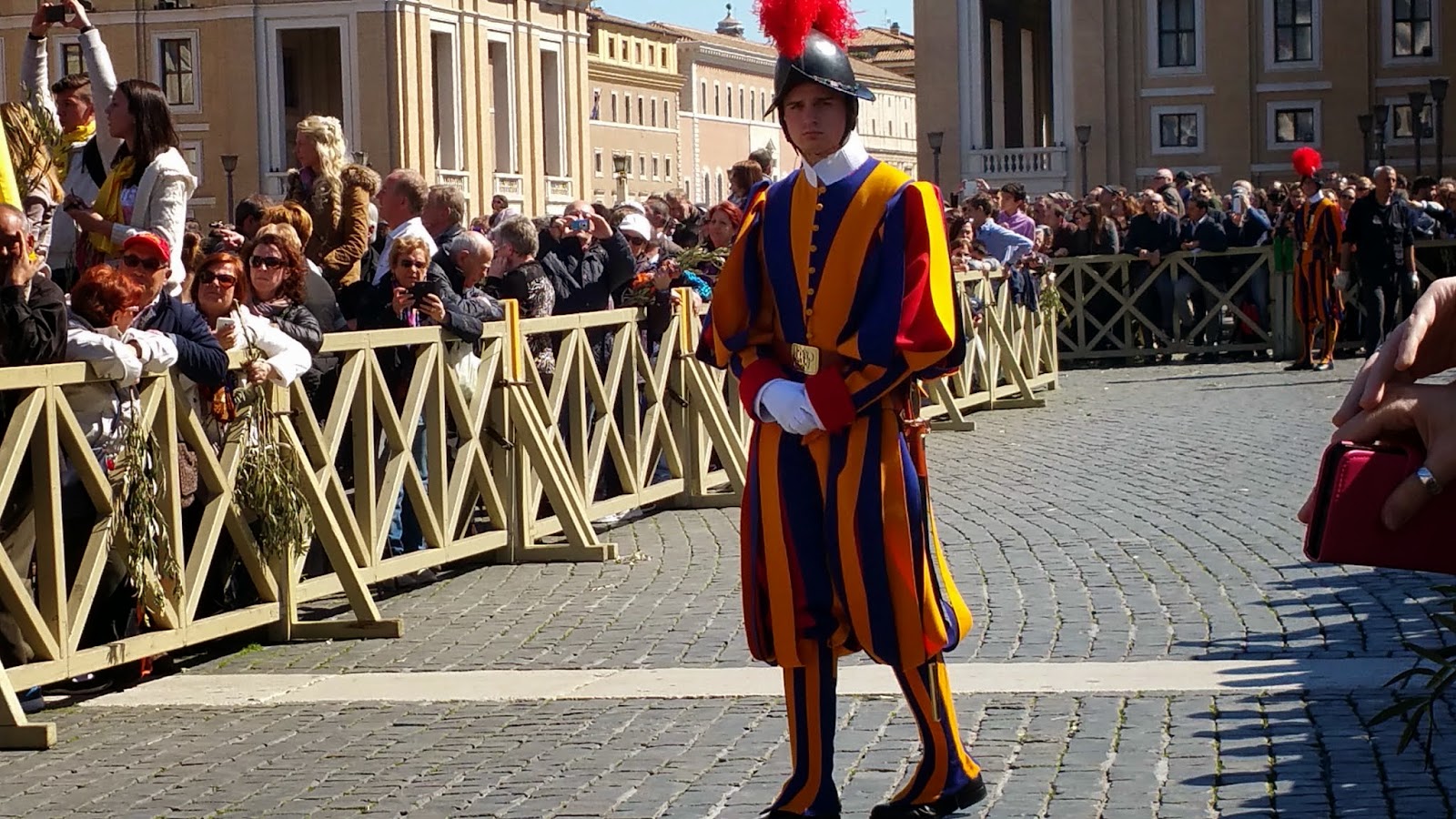 I'd hoped to see Pope Francis do the noon appearance at the window that he normally does on Sunday but since the three hour program ended after noon; no appearance happened and I caught the bus back to the apartment.

About two o'clock we caught the Metro and went all the way to San Giovanni in Laterano for a visit to one of our favorite churches.  We were there the day that Jim lost his wallet and phone but our thoughts were on other things that day.  Today we enjoyed the beautiful church while we were there.  Then we walked the length of the park that stretches between St. John's and our next church. 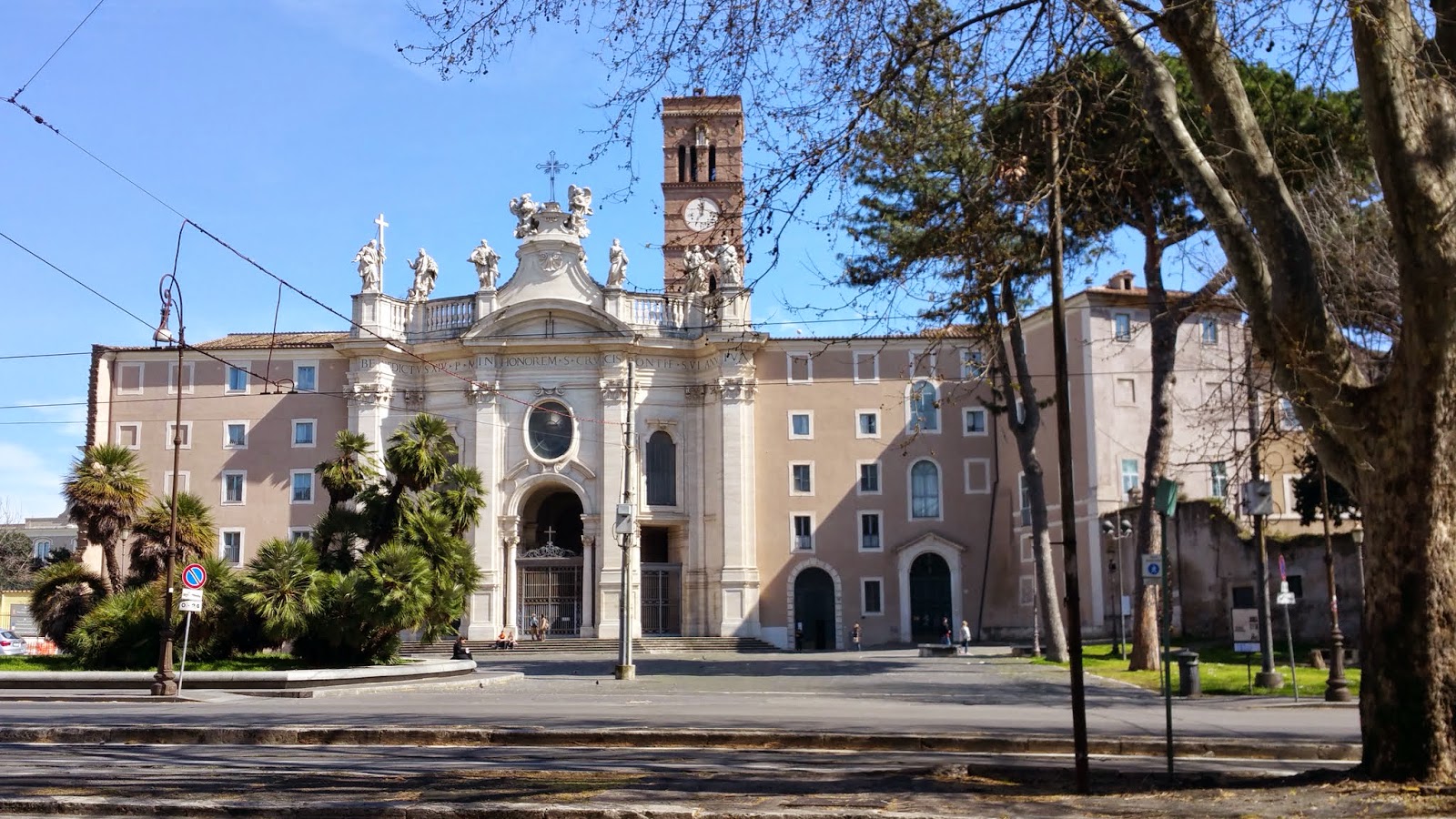 Jim had not visited Santa Croce in Gerusalemme and I'd so enjoyed my visit in 2009 that I wanted to make sure he saw it on this trip.  This is a very old church and one of the seven churches in Rome that are considered pilgrimage churches.  They are the very oldest and to make a pilgrimage to Rome you must see all seven of them.  We've still got a couple to go to in the future.  This one has a room with major relics of the Catholic religion:  thorns from the crown of thornes, pieces of the wood cross, a nail from the cross and several others. 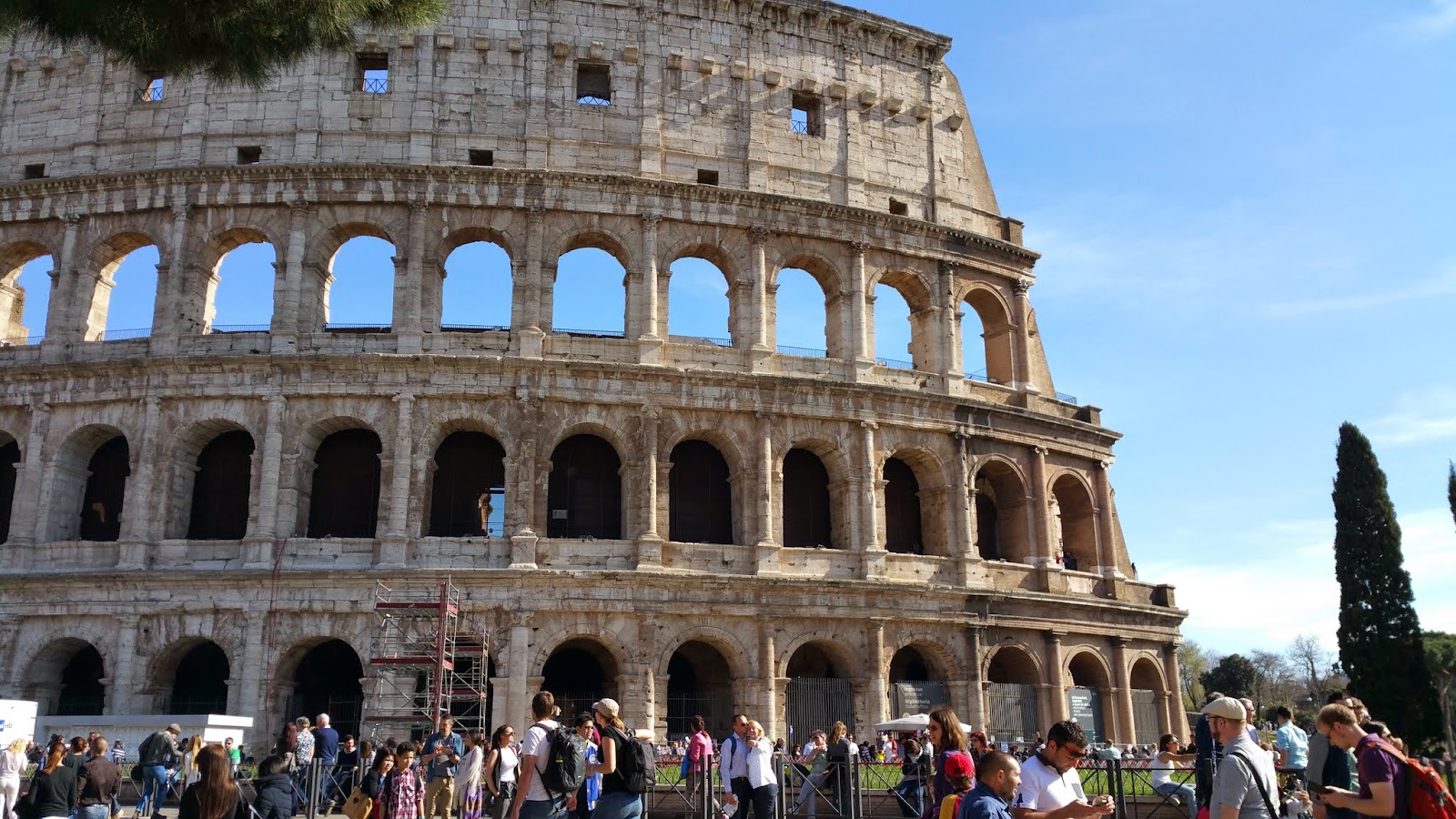 Leaving the church we cross the street and jumped on the tram and since we each had a seat we decided to see where it would take us.  We ended at the Colosum and it turned to go back and we jumped off at the next stop.  From there we walked around the Colosum and then headed up the very wide street that runs between the Victoria Emunale Monument and the Colosum.  There is major construction in progress as they are finally working very hard to finish the new Metro C line that goes right through this area. 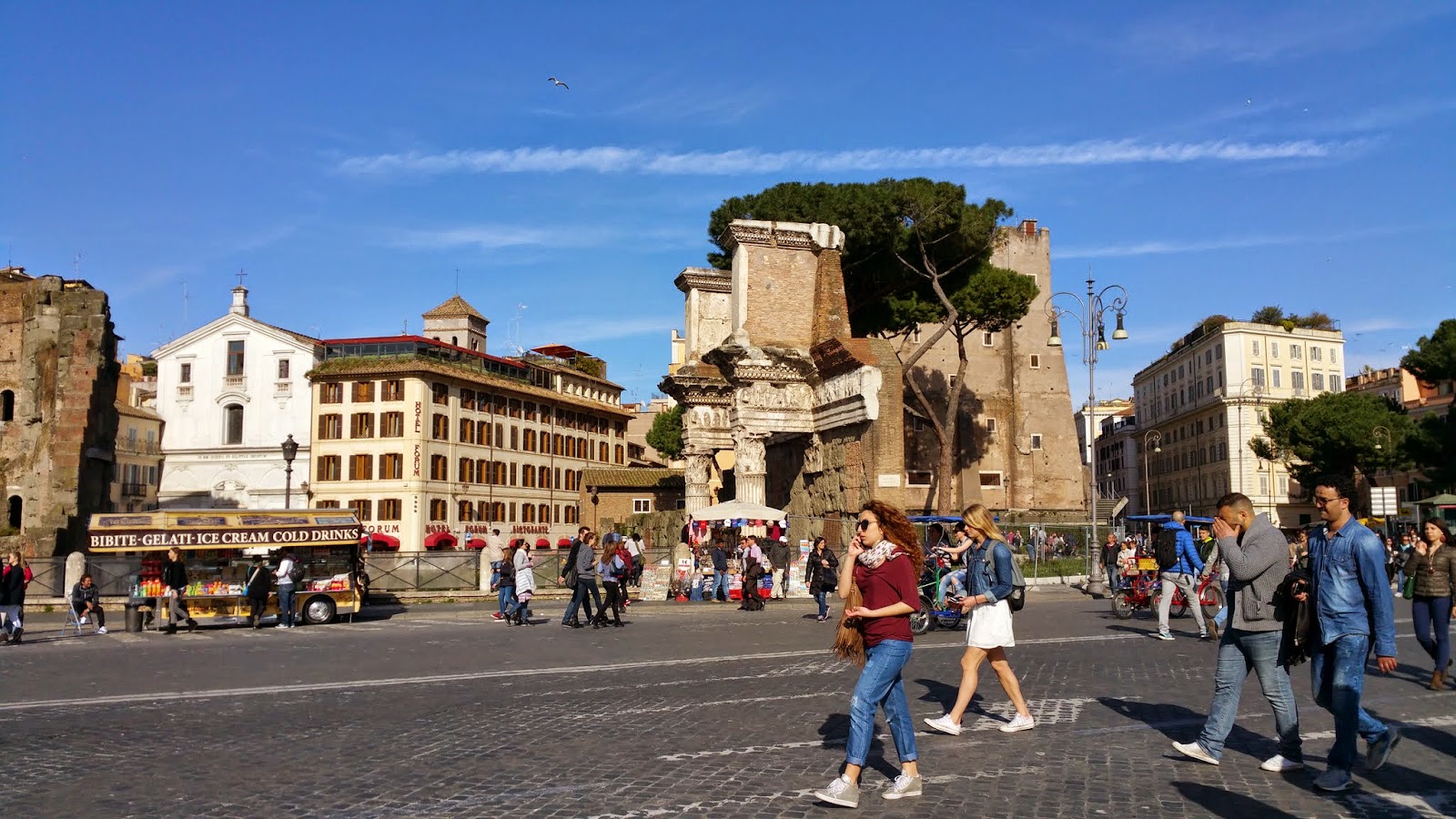 And today they had closed the road to traffic and it was one great big party on the street.  Lots of fun and by the time we arrived at our bus stop it was five thirty and time to head home.  After dinner we played some cards with our dessert and then pack the suitcases...why did we bring so much stuff!  We've only used a small portion of what we brought.   Tomorrow we leave for Florence on the train.  Hope you've enjoyed our day as much as we did.

Very good post, and I like your points. However I do think that lists still have some merit, but the poster should try to make the list.

Thank you so a lot for sharing this sort of wonderful data.

It is a very informative for us. Thanks for sharing….

Nice Post! Thanks for sharing…..
Europa coaches Dubrovnik service is high quality, with no risks and at affordable price. Hire a coach with Europe coach Dubrovnik for a day trip, a private tour, a school excursion, a company event, team building, daily shuttle services, airport and hotel transfer, wedding and other special events
Coach Rental

Rent a bus at Faniani Coaches and we will take you to Croatia, Italy, Austria, Germany, Serbia, Bosnia and Herzegovina, Denmark, United Kingdom, Belgium, Netherlands, Poland, Czech Republic and other countries in Europe.
Faniani Coaches