DAY FORTY ONE ON THE CAMINO

Had a bit of fog during the morning but overall it's another beautiful day in Spain.  Today I walked 6.79 miles in four hours.  No place to stop for tea so it went faster.   The first half was on and off of a highway...not so nice;  but the second half was on beautiful trails through wooded areas and tiny villages full of cows and I even found some pigs today.  The terrain a lot of ups and downs but only one really hard hill that was down steeply and very uneven rocks. 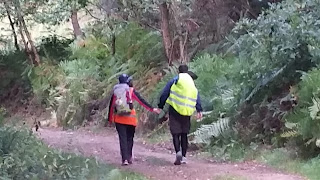 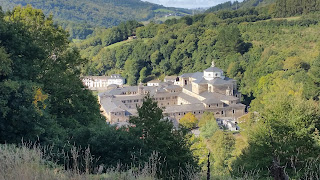 A note...we follow cow paths most of our days so you have to able to tolerate the odor and watch your steps constantly. Another reason our walking shoes are not brought into the bedrooms.

Tonight I'm in the village of Samos that surrounds a huge sixth century monastery out in the middle of nowhere.  I took a tour this afternoon of the monastery and plan to go back tonight for the 7:30 Mass.

Today I saw corn...that was as high as an elephants eye... my first pigs, many small churches mostly closed.  I had to stop once to allow a farmer to move his cows past me on the way to their pasture.

I had a wonderful dinner with two new pilgrims and then attended the 7:30 pm mass in the monastery.  It's been a very good day.  And Jim is sound asleep by now in Madrid.  He arrived at his hotel about noon and we talked.