DAY THIRTY ONE ON THE CAMINO

This was taken in light rain at La Cruz de Ferro early this morning.  This has become an important part of the Camino for pilgrims to leave a token representing reasons for walking the camino.

I said goodbye to my pilgrim friend Kathleen from Canada at this point, she is who I have been walking with for the past seven days.  She has a ticket home on September 25 and must start walking many more miles each day to finish her Compostela journey.  I have to walk fewer miles each day and will carry my large backpack most days when I can.

Last night we had dinner with pilgrim friends where they served a vegetarian paella, delicious.  It was a cold night and they had a fire burning in the common area when we arrived back at our albergue.  Everyone was trying to get their laundry dry.

This morning we woke to fog and expected rain.  By the time we walked the two km to the iron cross at La Cruz De Ferro everyone was putting on their rain gear.

Goodbyes were said and we continued to the top of the mountain in the rain..but no flies today.  I reached an elevation of 4906 feet today at the top and by the time I reached the village...still in the mountains...we were down to 3704 feet.

Along the way I stopped for many photos even with the rain.  Once I offered to take a group photo and they turned out to be a group of family and friends from various states in the USA.  I saw them again as I entered the village, they'd stopped for a late breakfast.   It was nearly noon, eight miles and five hours after I began walking this morning.  I've now completed 337 miles on my journey.  The American group are well organized, various ages from college age to probably about sixty.  One leader who set the routes each day and reserved all of there rooms before coming to Spain.  That means that they are using private pensions and hotels.

It's still raining outside and is getting worst by the hour.  Hopefully it will be dry tomorrow when I continue down the mountain for nine miles to the big city of Ponferrada.  Buen camino 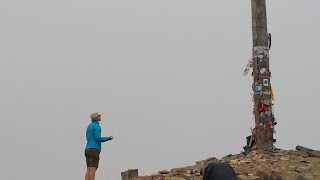 Not the 5 to 10 euros a night in most cases in the albergue. Although if they are using dorms you can reserve and still get a 10 euro rate.  I asked id they were all walking together all the time and was told yes...they only walk as fast as the slowest member.  I did not reserve ahead for today's lodging and it's a beautiful new albergue that is run like a hotel. We don't have to be out of the room until 10 am.  And, breakfast is served until 10 am. In the usual place out by 8 am and  breakfast is before 7 am.  I feel like I'm living in luxury tonight even though I'm in an 8 bed dorm room at 10 euro for the bed.  It's called Albergue La Casa del Peregrine in El Acebo.