DAY THIRTY FIVE ON THE CAMINO

Last night it turned out the albergue was not serving dinner which was perfect.  I walked back to the bar where I'd had my tea and cake in the morning, went to the dining room and ordered the Pulpo a la galega...octopus.  that plus two glasses of red wine and I was a happy gal.  I'm pretty sure it was steamed and then the sauce was added. .. but it was delicious. 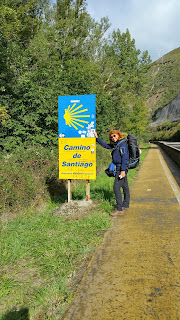 A bit more expensive by 4 euros than the pilgrim dinner..but it was nice to do something special.   My roommates were out at a bar watching a soccer (futbol) match between spain and rome.  One of them was  happy I never heard who won.  The Italian over did the walking and has shin problems and he couldn't get out of bed this morning so they are letting him stay for a second day.  Both the spanish fellow and myself gave him some of our food (I gave him a banana and a chocolate bar) so that he could eat something with out getting up this morning.   Found out the Spanish fellow is married  and a police officer in Barcelona.  I felt  very safe last night.   But I did put my ear plugs in.  Actually slept the best for days, I never heard them come home...but it had to be before ten o'clock as they lock the doors then.

Woke up late and didn't get out the door until nearly nine o'clock.   But it was another short day so no problem.   I saw a small church and slipped in but it was just ending.  Morning was cool but not cold and although there are some clouds, it's nearly three o'clock now and still no rain or wind.  Actually a beautiful day.
My  walk today was six miles in three hours.  I had a choice of a route along the highway or two different route in the mountains all ending in the same town.  I chose the road because it's easier to follow as I was walking solo.  Most of the time there was a thick wall dividing the path from the highway.  On one side we had a steep mountain that has been burned recently.   The other side was a small stream that was below us a few feet but created a pleasant sound as we walked.  At one point I was crushing walnuts as I walked that had fallen from the trees.

I stopped midway and had a cup of tea and a french bread for breakfast and after I left I met a German woman walking slow because of a bad foot.  We walked the rest of the way together and then she continued on to the next town where she is meeting her son.

I arrived at noon and was able to check in.  Did my laundry by hand as it would have been eight euros for wash and dry.  There is a mass at 7 pm tonight in the church at the end of the village that I plan to attend if it's not raining.   I also saw two pilgrims on horses that rode through town but no photo as I was too slow getting to the window.