DAY NINETEEN ON THE CAMINO

Left in pitch black darkness at 6:30 am


With my head lamp on.  Within half mile I found four more and they were thrilled to join me as we walked along the road to the first town. They only had small flashlights.  I really had to pick up my pace but was worth it for the company.  By the time we reached town it was daylight.   Soon we were off the road and on a rocky path headed up hill. At the top there was a large  cross that we all stopped at for photos.  Then downhill to the next town.  A nice girl started walking with me.  A nurse from Seattle originally from Wisconsin .  We walked together for over an hour.  Stopped in next town for some breakfast and then everyone put on rain gear as we left.  Sprinkling lightly and never got too bad.  It did keep the day cool for walking.

I saw the turn off for the river route into Burgos but someone had put some  arrows going to the right and a huge group in front of me followed them.  Didn't want to be alone so followed the crowd.  I knew I'd made a big mistake when I saw the airport...but too far to go back.   So the long walk around the airport and then through the outskirts of the  large city of Burgos.

But at least it was cool walking even though the concrete was harder than the dirt paths.  Met an Austrilian couple
And a Holland man who all made the wrong decision. 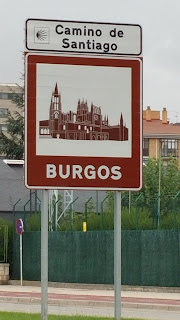 I finally turned on my Navigation apt that Jane had shown me in England...put in the name of the hotel and it took me right to the hotel.  They have a reduced price for pilgrims...only 35 euros and I sleep tonight between sheets and have my own bathroom.  The rooms are very tiny and in a separate section of the hotel but it's right in the old section near the river and an easy walk to the cathedral.

It was nearly 14 miles in just over five hours making my total to date 199.59 miles.

After settling in and washing out a few things I set up my reservations for tomorrow.  The hotel clerk made them for me.  Then it was out the door to explore the city.  Slowly walked to the cathedral which is the second largest in Spain.  Took the tour and enjoyed seeing it again.  Yes, we were here in 2004 on our driving trip.

About five o'clock I met Katia from Georgia in the cathedral square.  We met on my 3rd day of walking.  She stayed two nights so that we could reconnect and now we'll finally get to walk a piece of the camino together.  We waited a few minutes for two of her pilgrim friends from Budapest and then we all enjoy afternoon tea and cake while we visited.

Tomorrow well leave at 7 o'clock and start our journey to Hornillos del Camino. ..about 13 miles and into a new climate zone known as the Meseta.  Flat and very arid, but we're lucky as the prediction is for cooler weather the next few days.

Thanks for joining our journey...buen camino