DAY THIRTY FOUR ON THE CAMINO

Last night's dinner with Ines, the girl from germany was very nice.  We discovered that we actually saw each other several times on the trail and had dinner in the same place in Foncebadon in the mountains three days ago. This morning she was off to make some miles today before the rain began. 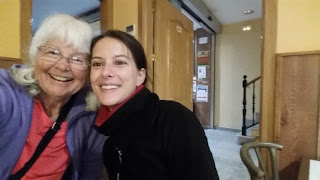 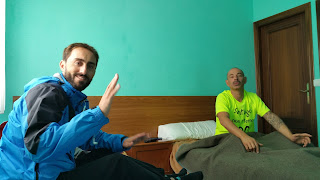 I walked part of the way today with a young girl from Ireland,  we both decided to take the road as it was shorter but was rather scary as it was busy and there was not much of a shoulder.  But we survived and walked the last hill on a dirt road into  Villafranca del Bierzo together.  She stopped for a snack and then left.  I found my albergue San Nicolas and they let me leave my poles and pack, but I had to wait until noon to check in.  Only a block from the Plaza Mayor where there were plenty of places.  The rain started to pour just as we entered town.

There is a huge monastery here but the doors were shut.  The church that we are attached to is now  a hotel.

My slow pace is nice...easy to carry my own pack even though I haven't gotten rid of anything. Maybe I've acquired more muscle!   Today was 5.47 miles in just under three hours.  Dinner tonight is here and is only 10 euro with more food than I can eat but I do enjoy the wine they serve with the meal.

We're in the mountains now of the part of Spain known as Galicia.  The weather is known to change frequently and their special dish is Pulpo a la galega. ...steamed octopus.   I love it so will try to have some while  I'm here.