DAY FORTY SIX ON THE CAMINO

We were awake early so left before daylight,  jim got to use a headlamp.  It was a wet foggy morning as we joined a steady stream of pilgrims on the trail that went steadily up for over a mile.  We soon had light but the sun didn't break through the fog until about eleven o'clock.    By that time we were well into our nearly eight mile walk in four and a half hours. 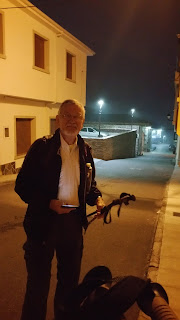 We didn't have a place to stop until we were half way there, and that was jammed.  Jim had hot  chocolate and I enjoyed a fresh squeezed glass of orange juice along with the banana that we'd purchased yesterday.  That was breakfast.  Then I got into line with a dozen or so women to use the bano.

By the time we were back on the trail we were well rested and prepared for the second half of the trail which again included some climbing and this time in the sun.  But, we did enjoy shade trees along the majority of the trail.

Jim was sure we'd missed our village but I assured him we had not.  At this point of the camino there are very few alternate routes and so many pilgrims it's difficult to get lost.

About 12:30 we came down into a valley and found out home for the night at Hppistal da Cruz.  It's a tiny village with two albergues and farms and that's it.  Not sure how well the wifi will work but we do have a connection.

Finally settled in we enjoyed a lunch of ham and cheese omelets with a glass of beer. Jim is now napping.  Private room but nine rooms share two bathrooms.

We have a German couple staying that we met in Casa Morgade.  They are  English-speaking so will probably join them for dinner this evening.
Buen Camino