DAY TWENTY ONE ON THE CAMINO

Last night we had a fabulous meal at the El Molino Casa Rural.  Five courses ending with our choice from a tray of liquors.  There were seven of us, 2 spanish, 2 Americans and 3 aussies.  It lasted for two hours.  Katia was the linguist for all of us as she kept the Spanish couple from Valencia fully involved in the conversation.   The peacock came to visit in the late afternoon and the rooster magically stopped crowing before dinner.   The winds were whipping our clothes dry and slamming doors all afternoon and continued through the night.  A second night of fresh sheets and towels as Katia and I shared a double room with twin beds.

Morning came early as we gathered back in the dining room for a Continental breakfast before climbing into the cars that quickly drove us the six miles back to the camino where we once again began walking about eight o'clock this morning.

For the first time I wore my fleese jacket under my windbreaker as the cold wind was still blowing as we headed out across the Meseta for a five hour walk over twelve miles of trails and paths along roads in some spots.  We passed several churches, the ruins of a convent that brought thoughts of the extensive ruins that we saw in the northern parts of England last spring.

We are very fortunate weather wise as the massive clouds continue to give us shade as we continue our way across this expanse of spanish desert that is normally scorching the backs of the pilgrims as they spend days crossing this region.  Hopefully the weather will continue to be gentle for us. 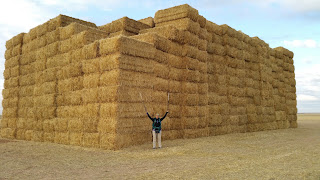 I'm continuing to enjoy the company of Katia, my pilgrim friend from the USA who is able to converse in Spanish for us.  A blessing and she is truly a Camino Angel for me.  We will eventually split as her time schedule is much shorter than mine and she will need to walk longer days to reach Santiago for her flight home before the end of September.  For now I give thanks each night that she is willing to spend time with and walk with someone nearly double her age!

We arrived in the village of Castrojerez about two o'clock and checked into our alburgue where we are again in a dorm room with ten people; but only 6.50 euros per bed.  The shower was cold but it motivated me to shower faster!

We ate a pilgrims lunch at 3 pm rather than the late dinner, so we are in for the night.  During lunch I saw the two frenchmen who I shared a meal with three nights ago.  They had just arrived and were looking for a place to stay.  It was nice to chat with them for a few minutes.  After lunch we spent several hours this afternoon at the Hospital De Alma, a house that is devoted to giving space to pilgrims to meditate and refresh their soul in a magical space dedicated to love and healing.

One of many verses on the walls under photos was "Never walk the road laid out for you as it will only lead you where others have gone".  Each designed to give you things to think about.

Tomorrow is another walk of about fourteen miles.  It's dark until after 7 am so we'll probably leave just before 8 am.  Buen camino