DAY TWENTY FOUR ON THE CAMINO

Yesterday I had an opportunity to be a Camino Angel to someone.  I've had so many that it was great to be on the giving end for a change. 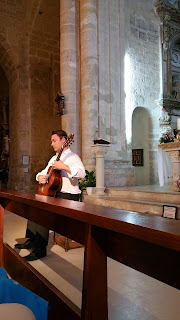 A nice gentlemen came up to me and asked when I was returning to California; surprised I responded not until October.  He started to walk away and I asked him why did he want to know.  He said that if i was going soon he was going to ask me to call his daughter in Los Angeles to let them know that he was okay when I got home.  Long story short I texted his daughter and she responded back immediately. They had not heard from him since early August when he'd left for spain.  She texted him three photos of the wedding that'd happened just before he left...before they'd gotten the photos. He was in tears and the family was elated to hear he was okay.  He is 73 years old and born in spain near santiago.   Lived in many places in the world but now in LA.    Has been away from the church for many years and has recently reconnected to his faith and is making this journey to thank the Lord for bringing him back to the church.  He is carrying a bible and another book in his pack...extra pounds.  But no cell phone.  It was a special blessing for me that he asked the question.  Katia switched albergues because two known snores checked in....for some reason I felt I should stay where I was and now I know why.  There is a saying on this journey that the camino provides when you have a need.   It's proving true many times over during this journey.

Last night at 7 pm until nearly 8 pm we had a young man perform classical music on the guitar.  Haunting and beautifiul.  Then a high mass followed by a personalized blessing for all the pilgrims.  And there were many of us as the next town was 17 km with nothing inbetween.  It was like a reunion, everyone was there.  I saw many people I have not seen in days.  I passed on the 10 pm soup and got a good night's sleep

Up early this morning I was out the door in the dark along with many others.  As we left the city the day was dawning and before we knew it we began to shed jackets as the sun became hot on our backs in a cloudless sky.  I was walking solo but never alone.  Some that I knew slowed and walked with me for awhile before they moved forward.

This trek is 17 km of Meseta desert with three resting stops.  None with toilets, the second one had coffee and some food.  The trees that existed were across a ditch and impossible to get to.  There were two barns that were fenced off.  But we were forewarned about conditions in our book

It was great to come over the hill  and see our village nestled in the valley.  Yes, my backpack was waiting for me.  I took advantage of the sunshine and paid to wash my sleeping bag, jackets and clothes.  Will be great to sleep in a clean bag tonight.  We even have a swimming pool and many of.the younger people are swimming.  Tonight we'll all walk 50 m up the road to a pilgrims dinner.

ferienwohnungen toskana
YES to that Stelle clutch!! I just received one a couple weeks ago and I'm absolutely in love with it - the sound is soooo good!