We awoke today at 7 am and were docked by 8 am in Cherbourg, France.   Big port!   By 8:30 am we were off of the ship.  It was dry but very cold.  We walked to the tram and stayed on all the way around to see where it stopped and how long it took.

Back at the ship Mary and Shirley had breakfast and we joined them when we returned.  They agreed to go on the tram by themselves around town.

Mary fell into the glass window in the dining room this morning as they were leaving; but it was mostly her pride that was hurt.  She was smart enough to twist and take the brunt of the fall with her back rather than her arms that have been broken way too many times.  Seems okay.

On the first day I fell in the same spots but landed lightly with my fingertips on the windows.  There is a short step in front of the window that you forget about after you’ve been sitting in the area for a while.

We went out again and this time we walked further and found another grocery store where we found and purchased two bottles of water for Jim; I looked for some more of the inexpensive chocolate bars that we always enjoy in Europe; but the store was too small and didn’t have any but the expensive chocolates.

There was a beautiful carousal for children.  The Hotel de Ville sat on a large plaza and since it was Saturday there was a Street Market….small because of the rain but Jim managed to find a pair of leather gloves….he’d packed two right hand gloves in his suitcase.

Walked back to the ship and found both girls on their second time around the loop and enjoying themselves.   We enjoyed lunch and then watched the movie Vincent & Theo in our room.   The movie shown in the theater each day is repeated several times on the television the following day.  Sometimes we watch it in segments between activities!

I went back out on the tram for a third round so that I could use the Wi-Fi to send birthday wishes to our grandson Jonathon who lives in Washington.   Upon returning we all gathered for a couple of hands of cards.  Dinner was Smart Casual and very good.  Nancy has a cold and sat at the end of the table.  We watched a movie in our room tonight call “Chocolate” ... an old favorite of ours.  We once visited the French town where it was filmed.
My steps today were 7,976 equaling 3.48 miles. 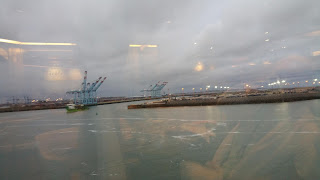 We took the tram to the gate of the port and they let us out.  We walked through the gate and parked outside of the gate were at least eight taxi’s waiting for customers.  We’d seen the sign at the ship that said the fee would be 50 euros.  We offered him 50 and he said yes. Jim had the name of the Cathedral on his cell phone and showed him where we wanted to go in Bruges.   We had the driver take us to the Cathedral where the Madonna and child statue is kept.    This is the only statue created by Michelangelo that was outside of Italy during his lifetime.  During the war it was taken by the Nazi’s and was a major piece of a recent movie about recovering the art work stolen during WW II.   It was about 30 miles and took us about half an hour to drive. 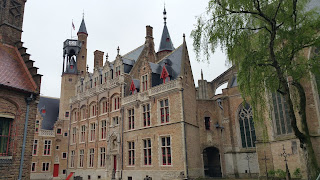 We arrived before 10 am and the rain was coming down steadily as we tried the door.  The church was locked and the sign said it would open at 1:30 pm.  Wow….what to do?

We walked towards the canal and at the second boat station found that we could purchase tickets. The rain was not keeping the tourist away.   Every boat was packed and the lines were long.  We all had either rain ponchos or umbrellas.  It was a colorful boat!    The tour lasted about twenty minutes as it twisted back and forth between the  various canals; snaking under bridges that were so low we actually had to duck our heads on one of them.  We were fortunate that when the driver queried the passengers everyone understood English, for some, it was a second language.   The entire cruise was done in English instead of multiple languages.   On the ship our first part of the trip was almost always in English only but on the second half we always had everything in English and Dutch.   The makeup of the ship’s passengers definitely changed in Rotterdam.   Back to the canal boat ride; the swans were out in great numbers but all seemed to be located near and on a particular island.    We found the rest rooms when we got off the boat; lucky for us as they are hard to find.   And, I’d had too many cups of coffee with breakfast before leaving the ship. 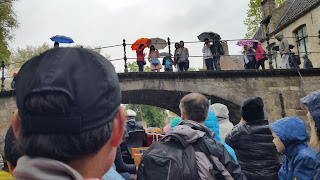 We spent some time in the souvenir shops looking for something to remember the city by; small and hopefully, unbreakable was the main criteria.   Shirley found a small porcelain windmill that said “Belgium” and they each purchased a magnate with the Madonna & Child.   Plus of course, postcards to commemorate the visit to Brugges. 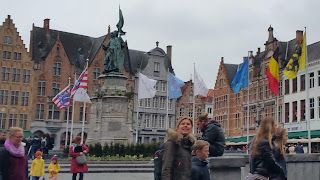 It was still raining as we walked along the street back to the Cathedrale to see the Madonna and Child but it was still CLOSED… scheduled to open at 1:30 pm; over an hour away.    So much for wishful thinking on a cold and rainy Sunday morning.   We could sit in the covered bus stop or better yet, our taxi driver had given us his WhatsApp telephone number before dropping us off.  His name on the business card was Oliver.   I dialed the number and left a message.  Within minutes he called me back and said that he could pick us up in four minutes.  True to his word … we were soon safely tucked inside of the warm taxicab on our way back to the ship!   And Jim convinced him to do a small detour and drive us into and around the town square to see the tall tower that we climbed so many years ago when we were much younger!


After we had lunch on board the ship and changed into dry clothes, Mary and I walked to the train station near the terminal to get some Wi-Fi time.   After we returned Mary and Jim played a game of chess while I worked on my computer journal in the puzzle room.   It has probably been forty years since either one has played chess.    Jim remembered the most and they worked together until they completed a game.

Tonight was the farewell dinner for many of the passengers, including our Nancy and Al from Tampa, Florida, will be departing the ship when we dock in Rotterdam.   They will be missed at the dinner table each evening.  The dessert tonight was Baked Alaska which everyone enjoyed except for Shirley who apparently didn’t realize that the rest of us had all ordered the same thing.    It was served individually with none of the flaming walks by the waiters holding the dessert high above their heads that we’d had on cruise ships years ago!  But,  it was still very good and Shirley finally got a taste several nights later when they offered it again.

Tonight was an early night in preparation for our tour to see the Tulip Farms tomorrow in Amsterdam.