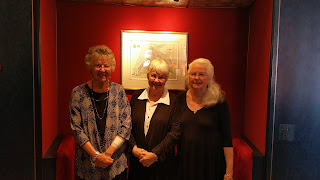 I was awake at 6 am and by 7 am I was out walking on Deck Three.   Did half an hour and then headed to the Hudson Room for 8 am Mass.  I met Mary at the Service Desk on my way in; she was changing the setup for payment of tips to the crew so that she could individually give the tips to those that had been the most help during the trip.   We’re taking the easy way out and letting the ship sort the tips from the daily fee of $27.00 that is being collected from each room for that purpose.    Father Steve was saying the mass and Father Peter, a guest, was also there for the mass.  Mary talked with him and we discovered that they’d x-rayed his hand and shoulder when he’d fallen at the beginning of the cruise but did nothing more than give him a sling and a bill for over $300.   So, he agreed that Mary was probably smart to wait until she gets home for the x-rays when her insurance will pay for them.    Mary did the readings for today’s mass.   Father Peter had two slings and he gave Mary one of them and it made her shoulder feel so much better.

After Mass I checked the room but Jim was already up in the Lido with the girls for breakfast.   Today is one of two finals days of cruising the high seas on the Baltic Sea that will bring us to Rotterdam and the end of our journey.

I worked most of the day on uploading photos to my computer and then making copies on a USB Drive for each of the girls.  I also included a copy of this journal on their USB Drive.

We each dressed early for the Gala Dinner tonight and then went to the 3 pm showing of the movie    PG13 and excellent.   Shirley arrived late and we’d had to release her seat.  After dinner she went to see the movie by herself and agreed it was one of the best we’ve seen on the cruise.   “Finding Your Feet”. A British comedy that filled the theatre with gales of laughter!

The Gala Night was fun!    Our last dress up event of the cruise.  We had Turf and Surf (filet Mignon and lobster tail) …. Fabulous!     Our meals have been outstanding throughout the cruise.   Jim sprung for a bottle of wine to complete our dinner.

After dinner we enjoyed listening to the Adagio group, two women… a violinist and a pianist … play classical music:   Four Seasons by Vivaldi .    Later we walked to the Ocean Bar for possible dancing but found they were concentrating on South American Music, so we didn’t stay too long before heading back to the stateroom where we watched the movie “Finding Fathers” on television until ten o’clock.

I was awake at 5 am and walking on deck three by 6 am.  I walked for an hour; it was extremely cold and very windy.   There was only one other person walking besides me.   Others would walk out and go a short distance and pop back inside the ship.  There was heavy surf but it wasn’t rocking too much.

Stopped at 7 am and went to the library where I bumped into Karen from Florida and we talked about our days after we leave the ship.  She is going with her friends first to Haarlem for a few days and then on to Amsterdam for the balance of her extra week.  Exchanged information again and hope to meet up some day again on our travels.

7:45 am I walked to the Hudson Room and found Mary already there.  She did the readings again this morning and Father Peter also participated in the Mass for the first time.   Our singing was so bad yesterday morning that Father Steve asked the best voice in the room if she’d lead the singing.   She agreed as long as she could select the song.   We sounded oh so much better; primarily because she’d chosen a song that we all knew!  Father Steve was ordained rather late in life and was an attorney for years before becoming a priest ten years ago.  Came from a family of eleven children.   As a child of about seven, his older sister told him not to sing in church because “he didn’t know how to sing”.

Jim, Mary and I enjoyed breakfast in the Lido and Shirley ate her breakfast in the room as she was starting to pack for the departure on Saturday.   Afterwards I went to the 9:30 am computer class.  Jim went out to walk but turned around when he found out how cold it was and did his walking in the hallways of the inside of the ship along with many other people who didn’t want to work out in the gym.

I found Jim and Steve in the lobby and Steve took photos from my camera screen of the photos that I took with my camera/cell phone last night at the Gala Dinner.  Good shots of everyone all dressed up.
I then went to Mary’s room and helped her get her suitcases packed for departure.   She is having more and more trouble getting around and doing things.   The plan will probably be for x-rays as soon as she gets to Marybeth’s home in Michigan.  The sling on her arm seems to help her if for no other reason than it keeps her from lifting things.
Then I went to our room and started packing our bags.  The large suitcases have to be out in the hallway before midnight for the staff to pick up and take to a holding room for taking off of the ship in the morning.  We found that we could have done it ourselves but it would have been impossible for Mary and Shirley to manage their suitcases themselves.

At noon we met the girls for lunch.  The afternoon was more packing and sorting.   Dinner was very good and I truly tried to cut back on the type and amount of food.  I know that I’ve gained weight on this trip.  Today was no ice cream, no bread and fruit and cheese for dessert at dinner.  I gave half of the huge piece of meat to Jim at dinner as there was no way I could have eaten it all even if I wasn’t cutting back.  I had a good day food wise; now just need to stay on track while in Amsterdam.   We were tucked into bed by 10 pm with alarm clocks set for 6 am.

Stay tuned for our eleven day adventure in Amsterdam  that begin tomorrow.