We’re at sea again today.   The days seem to flow together as we move closer and closer to the European Continent.   We met Shirley and Mary for lunch in the Lido Restaurant and then played two rounds of hand and foot, each winning a round and we’d switched partners, Shirley and I against Mary and Jim.  During the morning I walked a mile on the deck and a second mile after dancing in the evening.  Not many people on the deck at that time of night, but it was pleasant walking.  Plus, 15 minutes on the elliptical machine in the gym.  So, I felt good about my exercise.   Jim is usually spending a short time in the gym each day on the stationary bicycle which was recommended by the doctor for his back.  Mary has been walking the deck and is spending some time in the spa for the massages.  This is her first time for professional massages.  I ended the day with 12,816 steps (5.8 miles) and 15 minutes on the elliptical.

Mary and I went to 8 am Mass this morning.  Mary walked before Mass; I barely made it time wise as I overslept.   Jim and Mary attending the lecture this afternoon about the solar system.
Tonight we had Dan and Kathleen from Texas at our table. 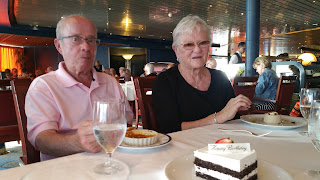 And, we all sang Happy Birthday to Nancy who was celebrating her 77th birthday today.

Tonight Jim and I danced at the Ocean Lounge with Al and Nancy.  There were some experts on the floor that were great to watch….very smooth.  Learned later that they compete in dance competitions regularly.  Not surprising.   Like us, Al and Nancy just enjoy dancing. 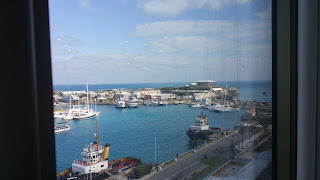 Weight on the scale in the gym was up several pounds….not good….I'm going to cut back on the bread and one of the courses at dinner.   No 8 am mass this morning.   Mass on Port Days are at 5 pm.
We arrived in Bermuda today.    Walked about the port individually.   Our cell phones worked very well all the time we were in port…but not in our rooms.  Bonnie was texting as we arrived.  Used WhatsApp and talked for a bit.   I was able to post photos and a short story on Facebook.

We visited the cathedral and shopping streets along the pier. 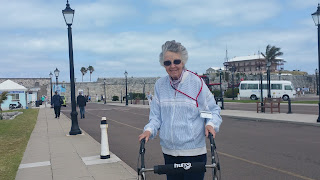 We walked from the ship into the shopping area right at the pier.   Jim and I visited a shop that had a glass-blower busy in one area that was fun to watch.   Shirley actually came off of the ship by herself using her walker.  It was very windy but she enjoyed her stroll and visiting some of the shops near the ship.

We were back on board ship by 11 am in time for lunch.   While walking on the elliptical machine today I figured out how to work the TV and listened with my earbuds.  Makes the time go much faster.  The Longest Day about Churchill and WW II was playing all day and we watched it in bits and pieces throughout the day.  I did 20 minutes on the elliptical machine and did a mile on the deck.  Also washed my hair in the afternoon and sat out on the deck and read my book while it dried.   My total steps for today was 7,406 steps (3.3 miles). 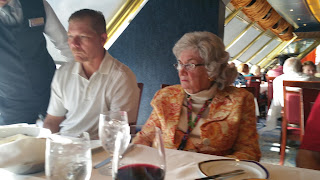 Dinner tonight was casual and our group of six were joined by Steve and Myra from Tampa. Myra has been a Realtor for many year, longer than me, and is still licensed and also dabbles in the stock market.   Steve is a jack of all trades;  he can do just about anything in the building industry.   Enjoyed both of them and they became our fourth couple completing our table of eight.  They have a stateroom with a tub and window and are on the same floor as Al and Nancy along with Mary and Shirley.  Al and Nancy also have an outside cabin with a window and tub, but they shower each day in the gym after exercise and using the sauna.   There are large private showers in the gym which are much easier to use than our tiny ones in our stateroom!

Tonight we poured a bottle of wine into glasses in the room and then took them to dinner with us.   We were each allowed to bring one bottle of wine on board with us for consumption in our rooms.   We were told that there would be a corkage fee in the dining room.  But we’ve discovered if we come in bringing glasses, no fee.  Shirley has a bottle that she purchased on second night and continues to have a glass each evening.  Julie, the wine steward, keeps it chilled for her and brings it out each evening. 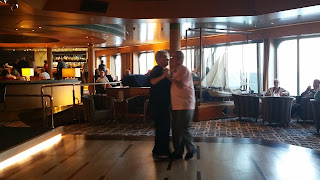 After dinner all three couples went to the Ocean Bar for dancing but we left early as Jim’s zip off pants had a major issue and came apart.  He was able to repair it in the room but that ended our dancing for that evening.  We also had on the wrong type of shoes: tennis shoes and flip-flops!
Posted by Martha at 1:40 AM