DUTCH REMEMBRANCE DAY:  annual day that honors soldiers and civilians that have died in military conflicts since the outbreak of WW II.  At 8 pm we all observed two minutes of silence throughout the ship.   At 2 am we moved our clocks forward another hour.

Awake at 6 am, I walked deck three for over half an hour before mass at 8 am.  Father Steve asked me to read the readings and I agreed.    I did okay for my first experience and it was a great experience.   When they asked for special remembrances at the beginning of Mass; I mentioned that Mary had fallen and so we dedicated the mass to her.

I picked Jim up after mass and we went to the Lido for breakfast.   We finally saw Shirley at lunch,  both girls had eaten their breakfast in the room.  Mary is very sore and Shirley said she’d be staying in her room all day.

Jim read and I worked on my computer.  The computer classes are all repeats so haven’t been back to any of them.  We also attended the lecture on the last two cities of our cruise for information.

This afternoon I spent two hours with Shirley working on deleting extra photos on her cell phone so that she could take more photos in Saint Petersburg when we arrive.  The girl in the photo shop showed me how to transfer photos between IPhones without internet using Air Drop.

I exchanged dollars for Russian Rupees so that we’d have spending money during our tour in St. Petersburg.  Mary, Shirley and I are signed up for a six hour journey on a hop on hop off bus in the city.  The exchange rate was good and they will take back at the same rate any that we don’t use but no coins, after we return.

Tonight Mary ate dinner in her room and Bill and Shari joined our table again.  They’d returned late from their tour to Berlin and Bill had eaten the German food on Lido deck…..suffered regrets later in the night from eating spicy food so late.    But it was nice to have them back at the table.  My main course tonight were frog legs...see above! 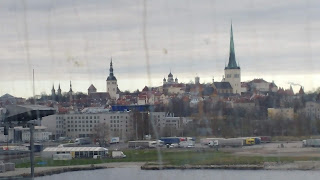 Breakfast at 8 am and off the boat by 9 am.  Jim and I walked to the end of the pier and took a look in the souvenir shop and then as we started our walk towards town.  Jim stopped and talked to a taxi driver.  He struck a deal for fifteen euros for a ride to the top of the old town.   I already had great photos of the town from the ship so we knew about how far we would walk. The driver spoke good English and gave us a running narrative about the ancient town.    He’d have loved to have had us agree to a two hour guided tour for eighty euros but we stuck to the original agreement.  He gave us directions on how to get back to the ship along with the aid of our city map that we’d picked up in the souvenir shop.

We had an overview of the city walls and many churches before starting our slow descent into the   Walked down many steps, through gates and visited the inside of an old Lutheran Church and watched and listened to a benediction service in progress in a Russian Orthodox Church at the altar behind the screen that is normally not visual from the standing area for those attending services.
town proper.

We really enjoyed the walk down the steep paths along the city walls into the newer part of the city.  Soon we could not see the ship any longer and had to make some decisions.  After several wrong moves we finally asked until we found someone who spoke English and he turned us around to go in the direct opposite direction we   But, he was correct and soon we started finding landmarks that we remembered on our drive away from the port.  We stopped at the pharmacy for some bandages for Shirley’s arm and then the souvenir shop for Mary’s keychain and post cards.
were headed.

As we neared the ship we discovered Shirley who had just come off the ship and was headed out for a walk.  Jim continued to the ship and I turned around and walked with Shirley all the way back to the pharmacy where we also did some shopping.  Found some Russian nesting dolls.

We arrived back at the ship in time for lunch with Jim.  I wrote all of the flight information for the girls and used WhatsApp to send it to our nephew Kevin who checked it all and verified that the flights were all still on schedule as planned.  Good to know that information.    Kevin also said that both he and his wife Melissa would be outside our ship at 9 am on May 9th when we arrive in Sweden.  The plan is to go to breakfast together.   We’re all excited about meeting with them during our last stop on the cruise.  Kevin is the grandson of our oldest sister, Betty.   His wife’s parents are both Swedish but had moved to the USA shortly before she was born.   The parents are still in the USA but Kevin and Melissa now live in Sweden, both are dual citizens and speak the local language.   We’d originally thought that the cruise visited the port of Stockholm and we’d visit with them.  But, after the cruise began we discovered that we are actually docking over an hour away and so they have agreed to meet us at Nynashamn where we dock.

I made several different trips out to the end of the dock where the souvenir shops were located to send and receive emails, texts, and WhatsApp messages.and got Jim and we walked out again.     On the third trip out I discovered that there was actually ‘REAL” Internet access.  I went back in  When you purchase something they give you a password.  Jim bought a beer and we enjoyed actual downloading with real internet for almost the first time on the cruise.

By 5:30 pm we were headed back out to sea and enjoying dinner.  Mary is still in a great deal of pain when she moves but did come up to have dinner with us in the dining room.  Everyone was glad to see her.  Mary has decided not to go on the Hop on Hop off bus tour in Saint Petersburg tomorrow.   Got to know Bill and Shari better tonight.  They live in Ohio but originally grew up in Alabama.  They have two children and nine grandchildren.  He is retired from the Air Force and they’ve lived all over the USA because of military life.  I had Quail tonight, delicious.

The movie tonight was “Home Again: very good!   I did 8,462 steps today, over four miles and two of those trips for Wi-Fi were done with my phone off so it could charge faster!