I had a sleepless night and finally got up at 5 am.  By 6 am was up in the Lido for breakfast.  The ship was awake and humming early as a large group are headed on a long trip by train to Moscow over the two days that we here.   I had crept quietly out of the room this morning so that Jim could sleep in.  Shirley called the room shortly after I left to tell me the Lido was opening earlier and she was also up.  Oops…that was the end of Jim’s sleep in.  Shirley and I had originally planned to meet at the Lido by 7 am.  But it was good to be going early as the crowd to get off the ship was long and slow going through customs.  But, by 8 am we’d gone through the Immigration office and were settled in the very front seats up top on a double-decker bus.  By 9 am we were on the road to St. Petersburg and a tour of the city by an excellent tour guide.  Our Russian Visa is the ticket for the tour!

The seat was unpadded but still comfortable.  We were the first on the bus and snagged the best seats upstairs in the very front of the bus.  There was a solid cover over our heads so we were not being roasted by the bright sunshine.

They took us past all of the major sites in town.  It was difficult as they were having the “dress rehearsal” for the big celebration on May 9th which is the annual celebration of the end of WW II.   The town is full of military personal and equipment.  Special flags fly on every bridge and across every canal and street.  It’s all very crowded and festive and will be all week.

We stopped for rest rooms and shopping and then headed back into the center of the city where we were given very specific instructions and let out of the bus.   We had about two and a half hours to go where we wanted on our own!    Shirley and I walk about four blocks to the Church of the Spilled Blood, paid our entrance fee and went inside.  It is a truly spectacular building.  Hard to believe that during the communist years they used this magnificent building to store potatoes.  But, at least, it wasn’t destroyed.

We walked back along the canal to the main street, Nevskiy  Prospekt.    Walked into a bookstore and looked around, admired the buildings on the street.  Everything was very crowded.  As we walked, I told Shirley about the Catholic Church that is somewhere on this street and suddenly; I saw it!   We walked inside and they were celebrating Mass.  The church was full of people and it was consecration.    Wow, beautiful timing, especially since there was no morning mass on the ship this morning.

Back on the street we continued to walk back to the area where we were due to meet our tour guide and bus.   We then walked into a restaurant recommended by the tour guide.  Beautiful and classic with white tablecloths.  We ordered coffee and Cream Brule.   Absolutely delicious and classic.  The waiter taught us how to say thank you in Russian.  “bol’ shoye spas ibo”   or “spas ibo”.   We spent nearly an hour there and then it was time to meet the rest of the group.  We had a delightful time and managed to purchase some wonderful miniature gifts for the girls to take home.

We returned to the ship about 3:30 pm and everyone was glad to see us as we’d been a bit worried about walking the streets of St. Petersburg on our own.   Jim was eating his dinner early in the Lido in preparation for his adventure at seven this evening.    He was scheduled to go to the Hermitage Museum for a private tour arranged by the tour company after closing; no huge crowds of people to deal with.

Mary dressed and joined Shirley and me for dinner in the dining room.  She’s doing better but still moves slowly.  We had the whole table to ourselves as Jim, Steve, Myra, Shari and Bill were all gone on tours. It was great; I had a deviled egg with fish added and then baked salmon, delicious.   Dessert was a Blackberry Sundae.  Shirley purchased a new bottle of wine which she and I each enjoyed a glass of wine with our dinner.   We all went to the movie in the theater together and saw the last half of the movie “Russia House’.  All about spies!

Jim arrived home at 10:15 pm.  He had a wonderful time and was able to use his three legged cane with a seat.   That really helped.   He said that the selection of viewings that were determined by the museum far surpassed his own selections five years ago during our private tour.  He was definitely in high spirits.

Slept in this morning to 9 am.   Breakfast in the Lido with Jim.  We spotted Shirley just as we were leaving.  She’d arrived earlier.   Traded the Rubie’s back into dollars with same exchange rate.   Mary is better but had breakfast in her room.  But, Shirley said she woke up this morning and discovered Mary washing out her black clothes.  So, we assume that she is better.  She cut way back on the pain pills today and is moving about.  She walked up to the gym today and weighed herself.  So this is all good news that she is moving more and I think that is good for her.

We all ate lunch together today and then played three games of Hand and Foot.    Mary and Jim won two of the three so took the game.   Mary asked us to wear orange shirts tonight; so we all four wore orange to dinner.  Shari and Bill were not there.
.
Before dinner Jim invited me to the Ocean Bar and we enjoyed listening to Gabriel play the piano and even danced a few dances even though Jim was in tennis shoes and I was in flip-flops!   But we had the floor to ourselves and it was great.  Also enjoyed having Lemon Drops and small snacks.   Dancing has kept us together for years and we do enjoy it.  Have had several compliments in the hallways from people who have watched us having fun on the dance floor.   We do a lot of improvising when we dance. 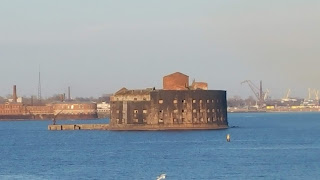 After dinner we stayed in the dining room to watch the ship cruise out of the port.  It is a well-marked, narrow path which is regularly dug out to keep the channel deep enough for the large ships.  Just before we left the entry there was a large graveyard for ships and submarines surrounded by old embankments; probably from WW II.   Very interesting.   Roy, our wine steward, took us out the crew entrance to deck three because it was difficult to take photos through the windows of the dining room.

We watched the movie “Russia House” again.  Jim is talking about a throbbing in his neck this evening.  My steps today were short a few.  Only extra walking was up and down the dock as we didn’t have any tours scheduled.  Those tours are our “visa” to enter into the city; no tour no visa no entrance!
Steps today 6,456 …  2.84 miles.  One note, we found that on the dock we could send and receive texts but nothing else.  But good to make some contacts.  Yesterday, the Wi-Fi was great on the bus but that was it.  But, I did managed to post on Facebook on the bus ride back to the ship yesterday.