I woke up at 6:30 pm, too late to see the entry into the port of Rotterdam.  It’s a long canal but we’ll get to witness it on the way out in the evening.  At 7 am we all met in the Lido on deck 8 for breakfast and then headed to the buses at 7:30 am. 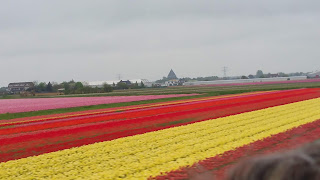 Definitely wet outside but after much discussion, Mary and Shirley decided to follow the plan and join us on the tour.  We did take Shirley’s walker and both Mary and Jim took their canes.  Jim has a seat so that when we stopped he could open it up and rest which he waited for the girls to decide which way we were going!

We saw a few sites from the windows of the bus but mostly traffic as we drove thru Rotterdam on the highway and then The Hague, where the King lives, before arriving in the outskirts of  Amsterdam.  Originally this farm was designed to showcase tulips and other flowers for the growers to decide which seeds and bulbs to purchase.  It has become a world renowned tourist site.   The plantings are done so that there are always new blooms coming up.  There were also some beautiful cherry trees in full bloom for our visit.  They were a gift from Japan.   The rain was a bit lighter during our two hour walking visit to the site, but we were definitely wet and chilled by the time we were back on the bus.   We took many photos including some in front of the old wood windmill and individual one standing in oversized wooden shoes in front of the store!

We lost Mary several times during the visit but always managed to get back together.  Except, when she went out the exit gate looking for us and then could not get back inside.  Jim finally went out and found her while Shirley and I stayed inside just in case he didn’t find her outside!   The joys of traveling!

The drive back to Rotterdam was much faster and on a local road with much better photo opportunities.   Many old wooden windmills, small villages, and of course the very large power windmills that everyone loves, but no one wants them in their backyard!   They are experimenting with building them in the water.

Back on board ship the new passengers were arriving and it was very crowded.  The elevators were jammed and being run but crew dressed in white jackets, gloves and bellman caps!   We’re hearing many different languages but mostly Dutch!   At 4 pm we had the mandatory lifeboat drill which was outside this time.   During dinner we enjoyed viewing the entire cruise out of the very long canal which lasted nearly as long as the dinner.

Tonight we had a new couple at our table.  Still the four of us and Steve and Myra along with two new people named Linda, from the San Diego area and her friend from Northern California who was a Realtor.   The weather was not bad but when we hit the actual sea it became very rough.  We were bounced around many time so hard that EVERYBODY was fully aware!

It was definitely not a night for the dance floor and we were tucked in early tonight.  My steps for the day were 8,061 steps … 3.52 miles.

I woke at 6:30 am and quickly dressed for cold weather and headed up to deck 3 for an early morning walk.  I walked for about half an hour and the Map My Walk said 4 miles….WRONG…. maybe two miles but I knew by counting the laps that it was much closer to two.

At 7:30 I walked to the Hudson Room for the 8 am Mass celebrated by Father Steve.  A bit younger than Father Mike and still has a parish so he must just be on vacation.  Father Peter was also with us this morning.   He is also a priest, younger and on vacation.  Has a broken arm but always in his “uniform”.   He told Father Steve that he would be missing for a couple of days as he was taking the two day trip to Moscow from St. Petersburg.  Wow…. I don’t think I’d want to do that ever.    Love St. Petersburg, we were there back in 2013; but never had a desire to go to Moscow.    A nice change in the Mass was that we sang a song at the beginning and end.  Unfortunately, on days in port there is no morning mass.  They have one at 5 pm but that is our scheduled dinner hour.    Father asked me to read this morning, Mary was not there, but I declined as there were many “big” words.

Back to the room to pick up Jim who was up and waiting for me to return.  Breakfast in the Lido and then to the Tour Desk where they allowed Jim to exchange the day visit to the Hermitage Museum for the nighttime excursion.  He’d signed up in error months prior to the cruise and was astonished when I discovered his mistake when I picked up our tickets.  A bit more expensive but well worth the cost as there would not be huge crowds that are there during the day.   The museum is being opened especially for this guided tour for our ship.
Met Mary in the lobby and she asked me to go with her to find a new white top similar to one that Shirley purchased last night.  They have both been very busy in the shops at night!    They’ve gotten some really pretty tops to change their wardrobe on the ship.   Shirley needed a new battery for her watch; when she asked the ladies in the jewelry department they said no, but why didn’t she just buy a new watch!  Yes, they were having an evening special on watches for $10.00 each.  During the evenings they put various things on tables and they are all $10.00 each; purses, watches, rings, etc.

The four of us went to the talk about the visit to Copenhagen and ended up signing up for the Hop on Off Bus for a city tour while we are stopped in Denmark.    And, Jim has discovered that they might not let him take his three-legged cane on his night tour of the Hermitage Museum in St. Petersburg.   He wants to take it more for the seat to sit on that the added support of the legs.

Mary and Jim played another game of chess today; Mary used her page of written rules but Jim still took the match.    We stood in a long line to make a request to confirm that Jim can take his cane….they’ll let us know if not…so no news will be good news.   I also requested a Guest Visitor pass for Kevin and Melissa in case they can come visit us here at the ship when we are in Sweden.
Tonight was a Gala Night and we all dressed up in our finest.   We had a new couple:  Bill and Shari from Ohio.  I had crab pancakes, excellent!