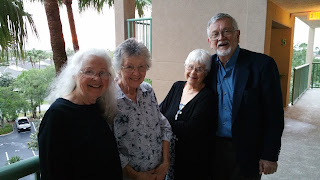 The planning for this journey began when we were visiting friends in St. Petersburg, Florida in the summer of 2017.  Initially we had hoped they would agree to travel with us but we were determined to go with or without them.  We booked the tour with Holland American Cruise Line on the Rotterdam for April – May 2018.  It was a repositioning cruise through Vacations to Go that would last 27 days.

Beginning in Tampa, Florida and ultimately ending in Rotterdam which was perfect for an extended trip with eleven days in Amsterdam before arranging our flight home with WOW Airlines.    We began talking with my twin sister about the trip and eventually our older sister, Shirley, who lives in Florida, agreed to come as her roommate.

Using AirBnB we booked a studio apartment near all of the museums in Amsterdam; booked our flights and then started looking at the tours available through the cruise ship for the various ports we would be visiting.  Our stateroom is on the main deck inside; who needs windows for sleeping.  We are definitely out and about through the day and rarely spend time in the cabin.  And the cost is much less without windows.   Mary and Shirley are one deck below us as they wanted a couple of months before finally booking their cruise, and there were no rooms left on our floor by the time they finally booked their cruise.

We flew on Southwest Air to Florida, using air miles, four days early and enjoyed visiting with relatives and friends while the clock moved forward three hours; slowly adjusting us towards the total of nine hours that we would lose by the time that we arrive in Europe. 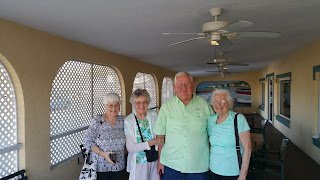 We’d rented a car with Enterprise….they are very good to use when you pass the magic age of seventy-five when many car rental companies refuse to rent to you!   We got an SUV so that we’d be able to transport all of the luggage for four to the cruise ship on Sunday morning.  My twin sister, Mary, had arrived from Indianapolis on April 1st and was settled in with Shirley in her condo.  We joined them and soon our younger brother came to visit for the day, along with Shirley’s children who also live nearby.  Family Reunion!   Our brother lives about an hour north during the winter months.  His primary home is in our home town in Indiana.

We alternated days and spent two of the four with our friends who live in St. Petersburg.    We met them on a trip to Europe in France in 1999; and continue to visit with them on a regular basis.

Up early to attend 8 am Mass, joined by Bonnie from St. Petersburg.  We arrived home and found Shirley packed and ready to go!  She’d been awake and packing all night!   But we soon had all of the bags and Shirley’s walker, loaded and ready.  Mary and I each held a small case and had our feet on another with a 25” suitcase between us!  But we were all together and headed for the port to board the ship before the anticipated furious storm began; it was schedule to start about 3 pm; but we were boarded well before.  Jim and I dropped the girls with all of the luggage at the port, settled them into a safe and dry area with seats and then drove back to Tampa Airport to return the car.  A taxi cab back and then we boarded the cruise ship well before 3 pm.  It was a terrible storm and many passengers missed the ship because of the cancelled flights coming into Tampa.    We met one lady who finally caught the cruise at Bermuda, five days later.

Shirley and Mary are one floor below us so we are never far apart.  We decided to book 5:15 pm daily for our dinner and they assigned the four of us to a table for eight at the windows in the back of the ship giving us a fabulous but sunny view of where we’d been each day during our evening meal…mostly water!  But once we’d worked out the lowering of the shades we were in good shape and truly enjoyed our table location.  Each evening we looked forward to meeting new guests at our table.

The very first evening, Al and Nancy from Tampa; originally from New York, joined us and have  continued to sit with us every evening by request.  We also see them at Mass every morning.  We were joined the first night by Melvin who kept Shirley entertained throughout dinner and Cora, two single travelers.  On Monday evening we were joined by Dick and Jane.  Tuesday brought us Carol and Cathy.  Wednesday night we had Dan and Katherine from Texas; and on Thursday Myra and Steve from Tampa joined our group and continued to sit with us for the rest of the cruise. 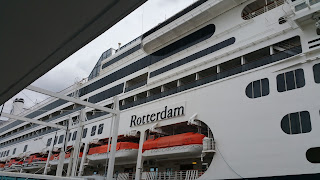 Most evenings we join Nancy and Al at the Ocean Bar for some dancing.  It helps if we wear leather shoes.  There is a piano player that follows the three piece band.  He is a young man from Peru named Gabriel.   He can play just about any tune you can whistle.  This is his first tour and we really enjoy his versatility.   By 10 pm we are generally off to bed instead of the evening entertainment.

As you can see I ’ve finally getting around to writing this on Friday; in between computer classes.
We do keep busy during the day and one of nearly everyone’s favorite time of the day is when the Times Digest arrives.   It gets later each day as we sail further from the USA and the source of the news.  It’s a small eight page compellation of world news, investment news and the weather.    There are racks in the elevator halls and other places with the paper in about eight different languages.
Sunday Steps:  5,658.... Yes, I'm going to be giving you the running count of steps to keep me walking in preparation for my long walk in Spain later this summer.

I will be posting my journals which were written daily during the trip in two day increments.  For my friends on Facebook, you've been getting about 20 photos and a short narrative every day during the journey.   We are now in Amsterdam enjoying our after cruise adventure.  I hope you enjoy our story.
Posted by Martha at 2:48 AM

Lovely, lovely, such fun to read and bring back our memories of the delightful journey. I tell my friends the highlight of the vacation was the people we met. Your family will remain memorable. I’ll be watching for news on your Camino walk.