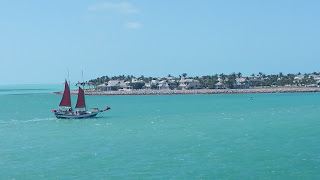 Last night Shirley took a tumble.  There is a step up into the bathroom and in the dark she went head first into the small bathroom in their room.  Now we all keep our bathroom light on all night to prevent any of us from repeating that fall.  She has bumps on her head and face and scrapes on her legs but seems to be weathering these okay.  FYI … she is good about using her walker in the evening and during the day when the ships is rolling more than usual.

On Monday morning Mary and I met at 8 am for the daily morning Mass with Father Mike.  The room is full and various people, including Mary, take turns doing the readings.  The homily is short and by 8:30 am we’re out and back to pick up our partners to go to breakfast in the Lido deck.  Shirley and Mary generally have their breakfast delivered to their room.

Due to the storm on Sunday, we were over an hour late in leaving the port at Tampa and subsequently late in arriving at our first stop:  Key West.  Our friends in St. Petersburg found an app that tracks our location on the internet and they know exactly where we are at all times.  As we entered Key West Bonnie was texting me on my T-Mobile phone using WhatsApp and the reception was wonderful as long as we were in port and on the upper decks.

Mary and Shirley went off to town together on the free trolley for shopping and Jim and I went separately.  Arriving in the town we asked for directions and walked to the Ernest Hemmingway Home; a bit further than we’d thought plus we walked about 4 blocks in the wrong direction but we found it and enjoyed the tour. 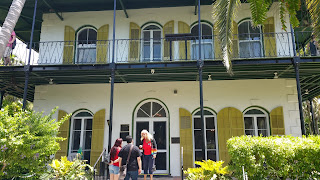 The house has about fifty cats.  Three black and white tabbies are always on the bed in the master bedroom.  Others all have movie star names and are located throughout the property.  The tour guide told us many interesting stories about the property and the Hemmingway family.  Jim, the English teacher, was thrilled to see the room and typewriters that Hemmingway wrote his three most famous novels on …. Standing up he said! 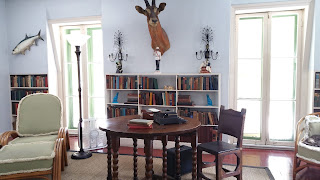 We walked eight blocks back to Sloppy Joe’s Bar; Hemmingway’s favorite place in the evenings.  Crowded, but a lovely couple asked us to join them as they were about to leave.  Later we asked another couple named Bob & Debbie to join us before we left, paying forward the good deed.  They plan to go to St. Petersburg, Russia someday so I gave them my card so they could check out our guide that we used during our visit.  Two beers and french-fries and we were good until dinner.

FYI….the beautiful swimming pool on the Hemingway property was a huge boxing ring where Ernest taught boxing until he went to Spain.  When he returned his wife had spent $20,000. To build a large swimming pool; the original property had only cost $8,000.  It is one of the largest private properties in Key West and sits well above sea level making it much safer during storms.

Tonight we got to know Al and Nancy better.  Al is also a twin and we had lots of fun sharing   He has also written many books on various subjects that we're going to take a look at when we arrive home.  All are self-published and sound interesting.
information.

Today I walked 16,358 steps (7.39 miles) and also went to the gym and did five minutes on the elliptical machine.  My goal is to increase it every day to reach thirty minutes a day.    The third deck is set up as a walking deck and 3.5 loops equals one mile.    The large amount of steps today was mainly a result of walking to Hemingway’s home.

The morning began with Mass at 8 am. We’d moved our clocks ahead one hour during the night.  So now we’re four of the nine hours that will be the difference between California and France. Mass was followed by breakfast in the Lido dining room.  We went out and walked the third deck for some mileage and met the girls for lunch in the Lido at noon.

After lunch Mary got out her cards and we played four rounds of Hand and Foot.  Did not keep score but Jim and I had the highest number of books every hand.  Tomorrow we’ll switch partners.  Fun not keeping score.

Jim did some laundry in the sink today and tomorrow will be my turn.  They provide a small line in the shower to hang a small amount of clothes and then we have a rubber line that we can stretch across the bed as they begin to dry.

The captain did a speech for an hour and a half on the history of the Holland American Cruise Line.  Excellent and very informative.   The two tiered room was full and I didn’t see anyone leaving during the presentation.  But, must admit I did catnap a few times.

Tonight was the Gala Night and we dressed up for dinner.  Carol and Cathy joined our group of six for dinner and photos were taken by the professional photographer.  Not sure if we’re going to purchase some or not.  We even had special menus tonight.  The food has been beautifully prepared and there is a nice selection each night.  Jim is finding duck on the menu regularly and since that is his very favorite dish, he’s very happy. 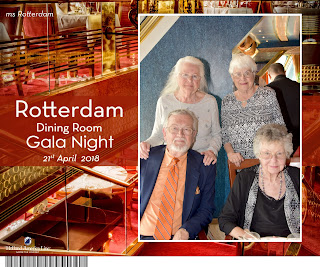 After Dinner Jim and I joined Al and Nancy on the dance floor and enjoyed tripping the light fantastic.  Generally one or two couples at a time are dancing so one feels on display.   Some are really good but we’re holding our own against many of them.