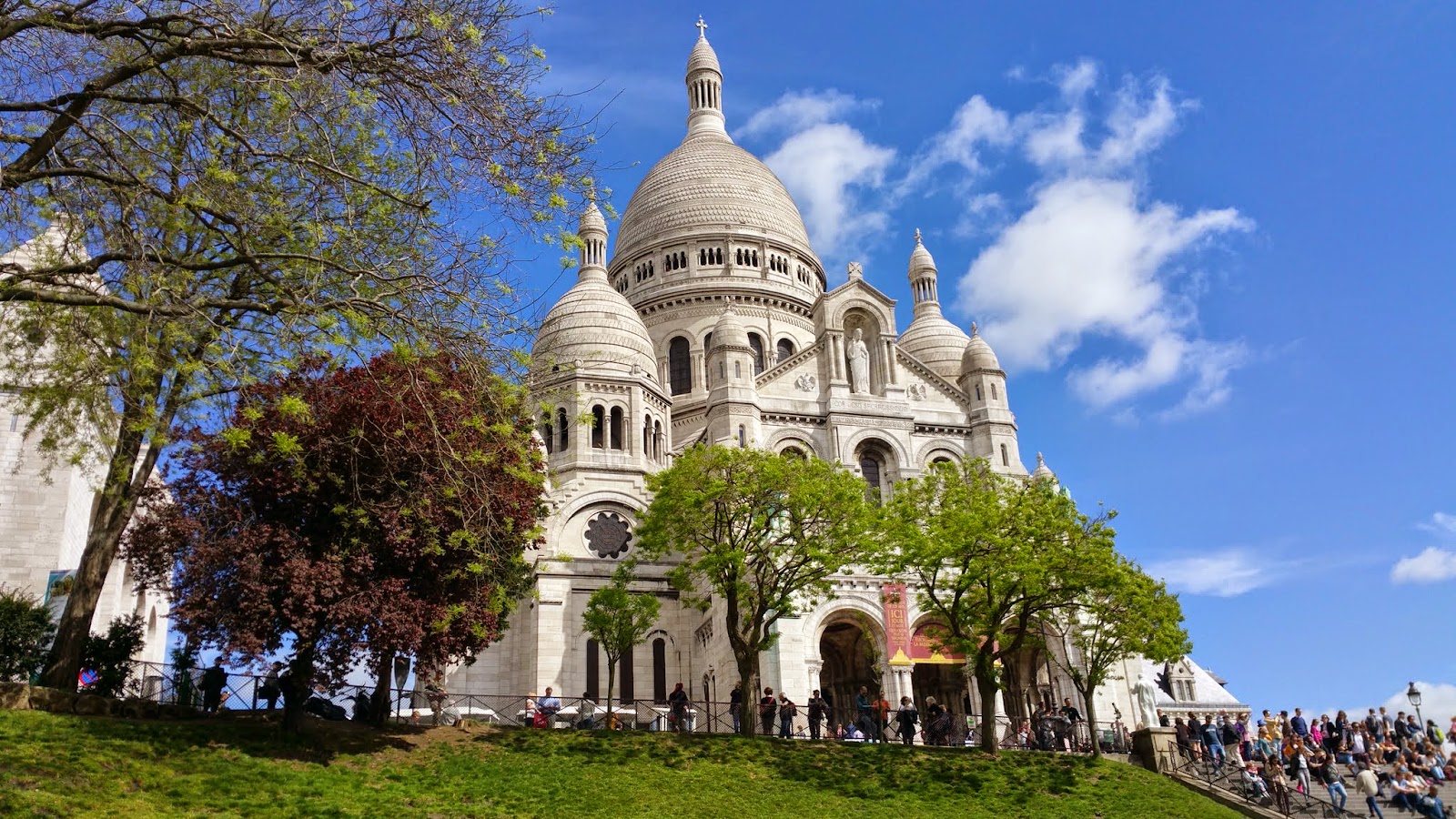 Monday morning arrived full of sunshine and we were out the door by ten o'clock in our first taxi of the day that took us up the hill to Montmatre and the Sacre Coeur Basilica.   We didn't go in because of all of the steps for Philip, but enjoyed the views as we slowly walked from there to the square full of artists surrounded by restaurants.  Each had their own style and we each found at least one that we enjoyed.  Phil found a special painting of the area and kept going back for another look.  He is an artist himself and has a greater appreciation than most for the work that goes into each painting. 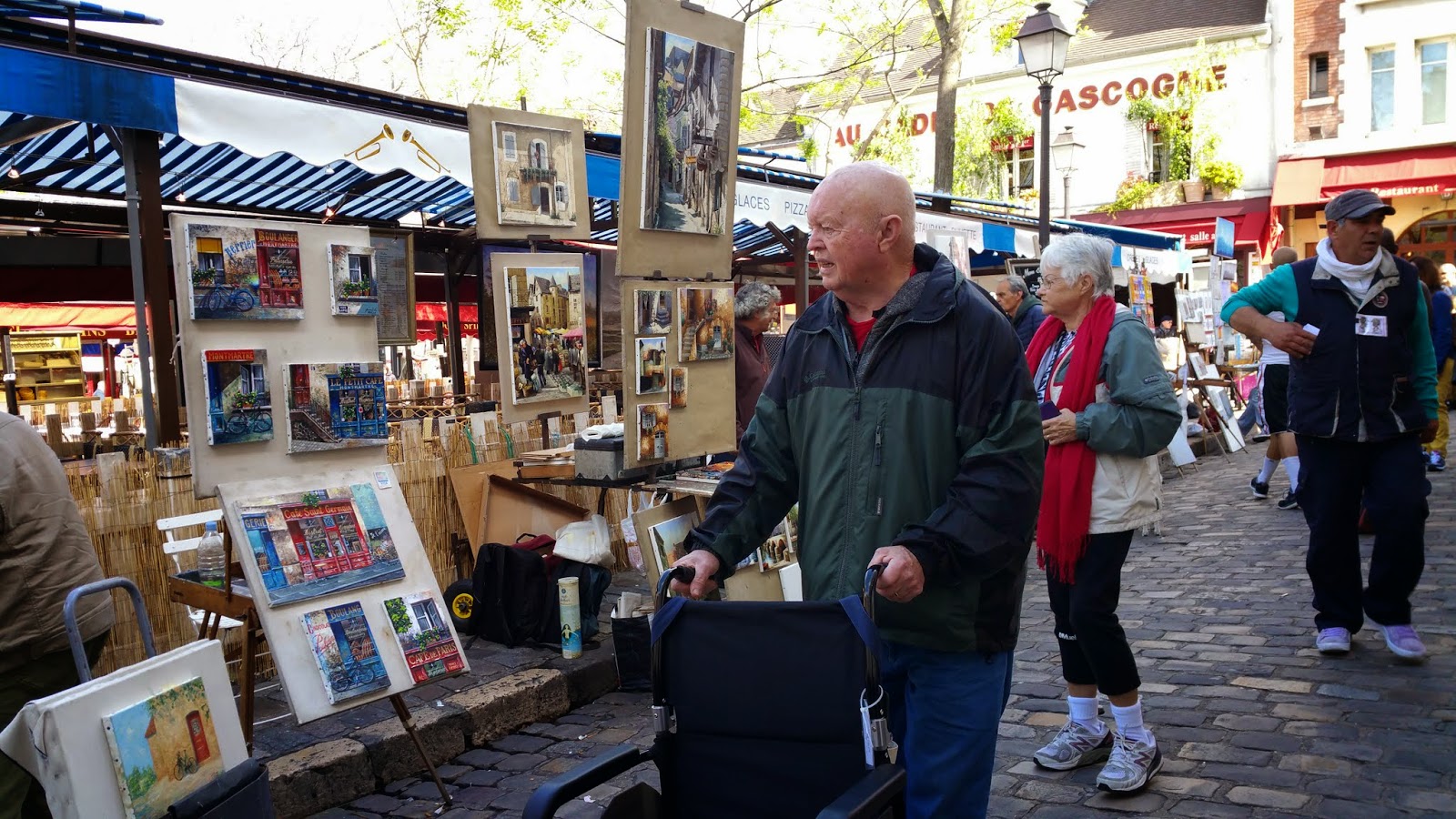 Mary and I were both separately by different artists encouraged to stop for a moment while their fingers moved sharp pointed scissors rapidly across paper and within minutes created a silhouette of our heads...neither were aware that the other one was with an artist.  Then came the sell, first it was twenty euro, then fifteen euro and as I walked away...just for me...ten euro!  Who could resist.  When Mary saw it she immediately returned to her artist and offer ten euros...which was immediately accepted.  So at the ripe old age of 76 we each have a likeness; our parents had them done when we were somewhere around ten years of age and we still have them somewhere.  Fun! 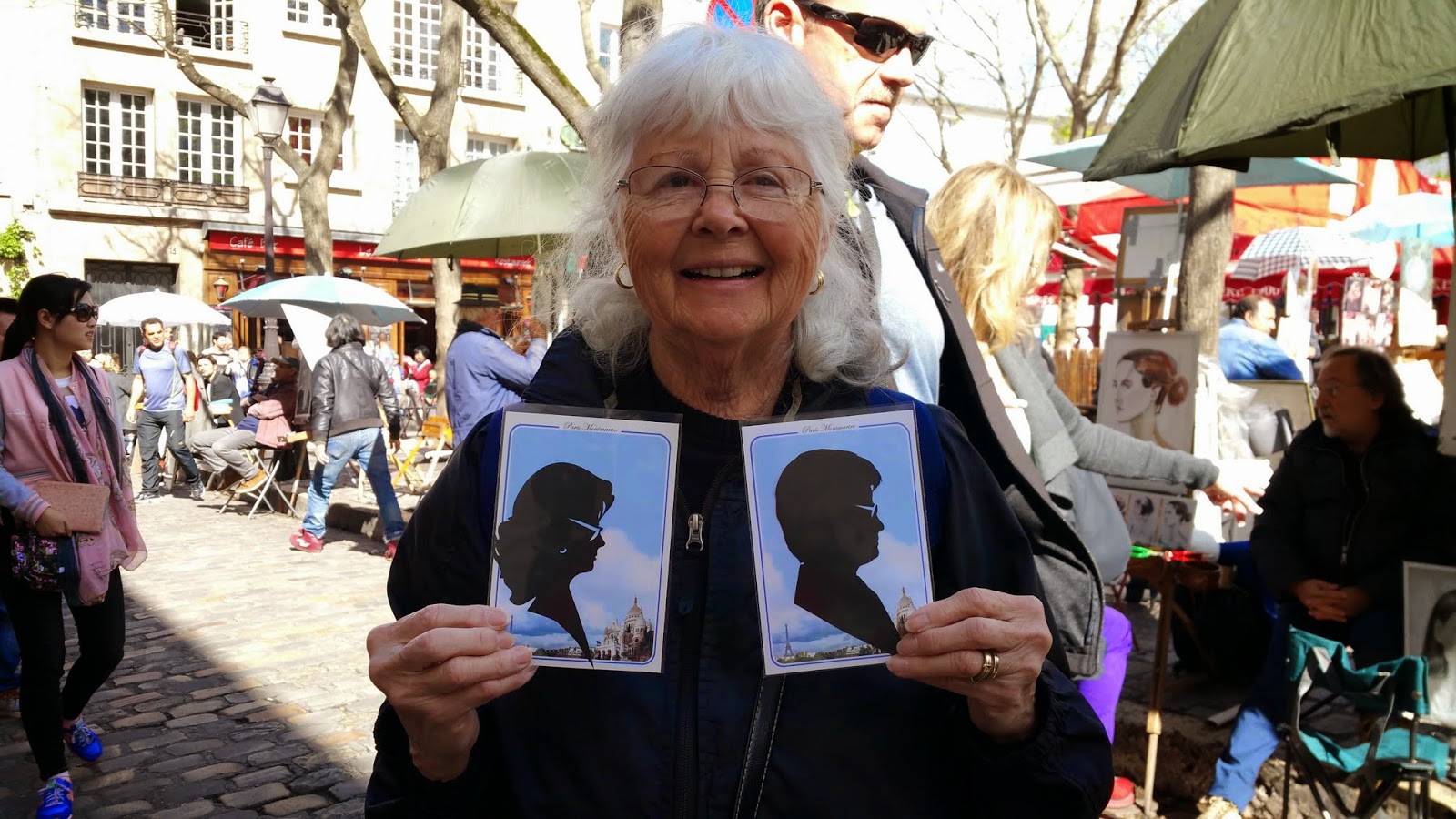 We finally moved the boys away from the square and back towards Sacre Coeur for more vista views.  Along the way, Phil decided he wanted that painting.  It is about four by twelve inches so can easily be carried home.  It had started at forty-five euros and we already had him down to forty.  Jim was nominated to return to negotiate a good price.  He got him to agree to thirty-five euros and he gave him a fifty.  As he counted his change on the way back to us; he'd only paid twenty-five euros.  Phil was thrilled. 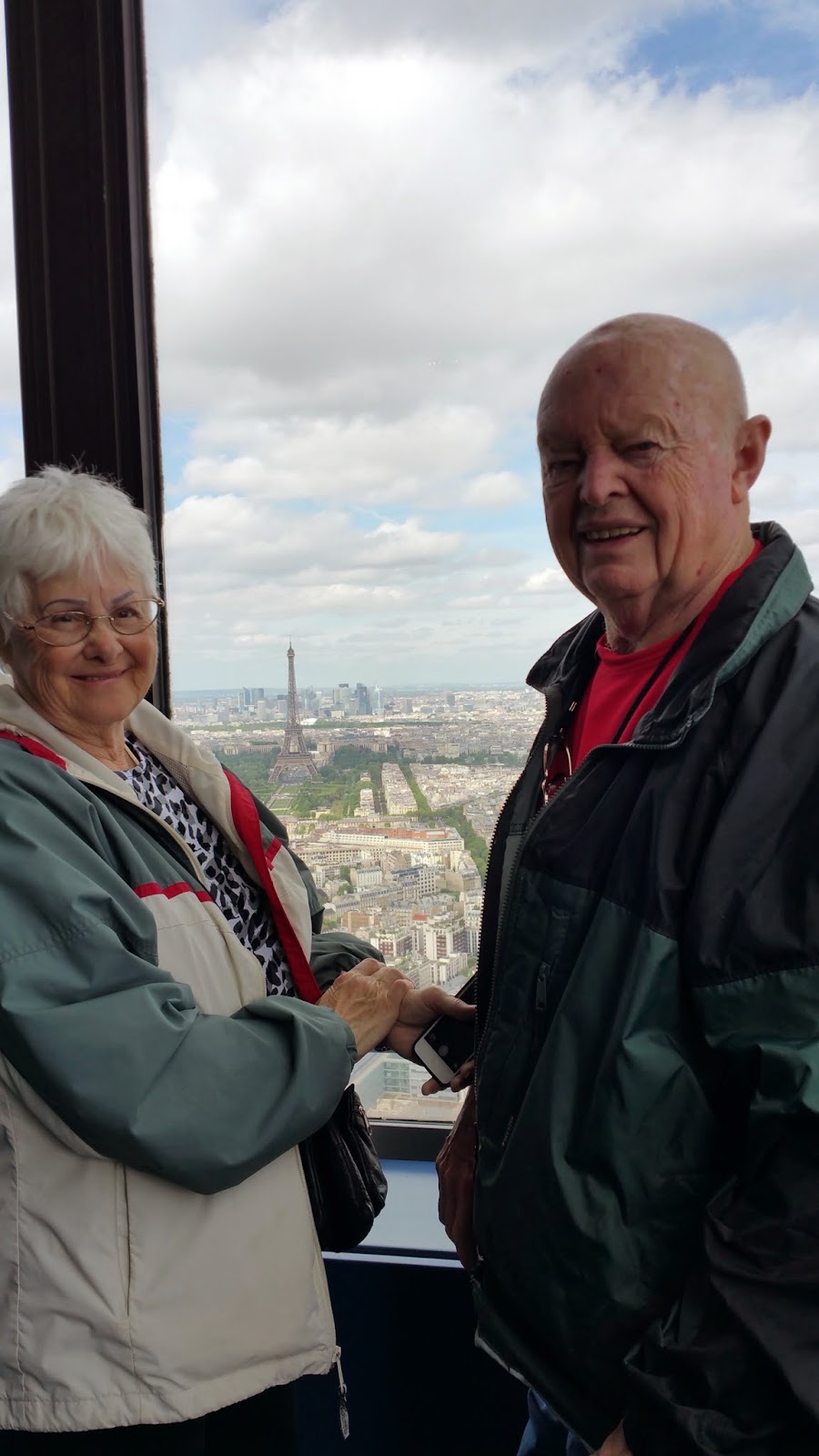 It was hard to leave the hill and the man who was playing the beautiful harp on the steps.   But, we hailed our second taxi that took us down the hill past the Opera House, over the river, finally stopping at the very tall Montparnasse Tower.   We had tickets for ten o'clock tonight but heavy rain storms were predicted and we have an early morning on Tuesday.  So we all agreed that we'd do the tower for the views of the city.  It was very wheelchair friendly and the views from the fifty-sixth floor were wonderful.  There are steps up two more flights to the outside for views but we were happy with our glass windows.

Back to the ground floor where we caught our third taxi that took us to Rue Cler.  It was noon and we decided to walk our favorite market street and stop at Ulysses, our favorite crepe maker, for a lunch of jambon and fromage crepes.  Mary, being a vegetarian, had eggs and cheese!   After lunch we continued our stroll down the street until we reached Avenue de La Motte Picquit.  That took us over to the Champ de Mars, the large park that leads to the Eiffel Tower.  We took a look at the Peace Monument that is closed for repairs and then strolled down the long park towards the Eiffel Tower stopping regularly to take photos. 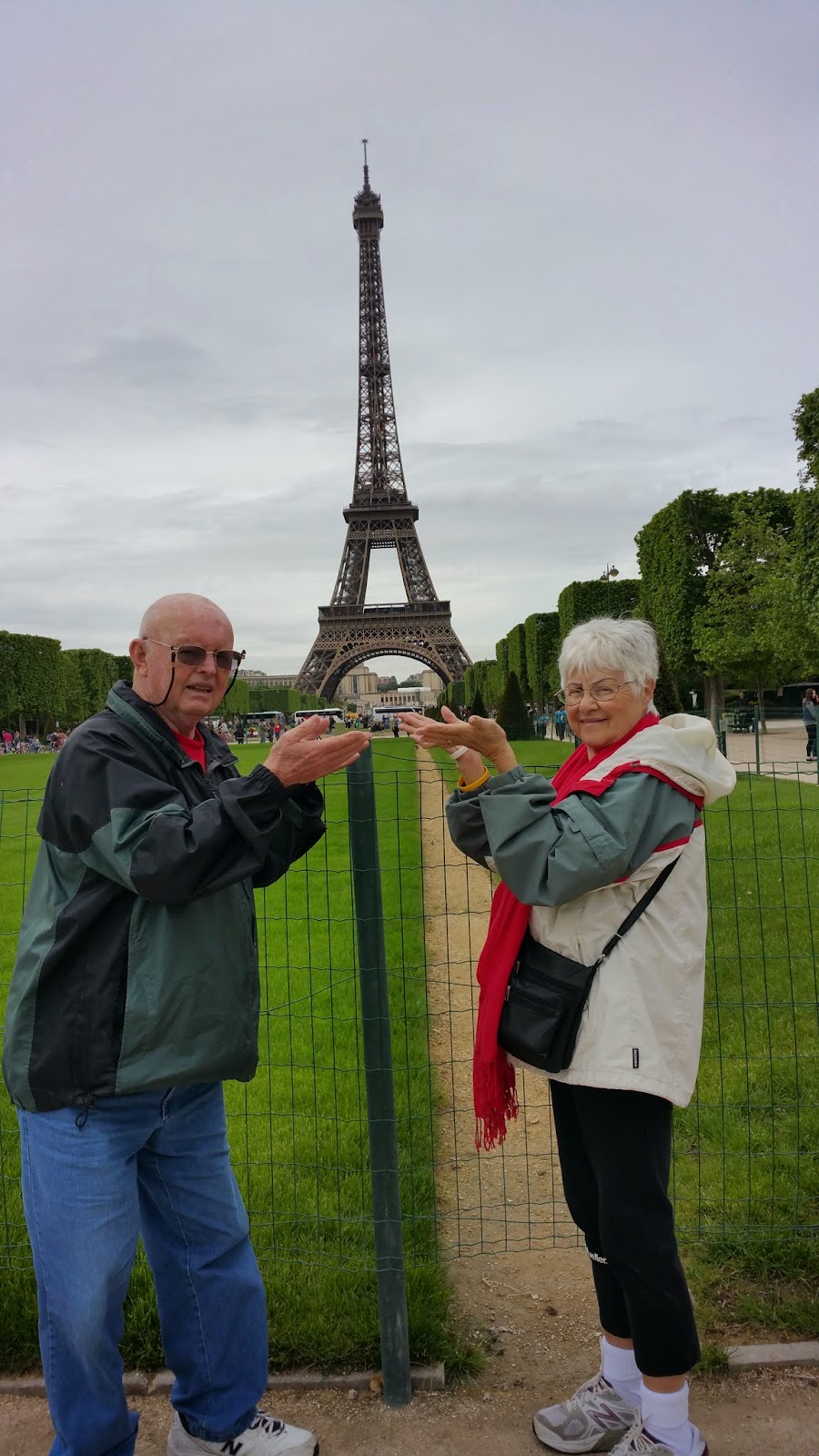 It was fun walking under the tower and looking up to view the new glass floors on the first level that have finally been finished.  Contrary to what we thought, it is still open in the center and only the corners have glass that you can walk on for views of the ground.  Soon we were out on the Quai Branly and flagged our fourth and final taxi just in time as the predicted storm was arriving.  Everyone was tired and ready for a nap when we arrived back at the apartments.

I used the next hour to go over to the restaurant where we'd had dinner on Wednesday evening and retrieved my red hat that I'd purchased in Florence.  This was my third trip as they were closed for the May Day Holiday on Friday and Saturday when I went.  This time I called the restaurant before going to the Metro for the trip.  But, I now have my hat again!

At six o'clock we walked in the rain to Mary and Phil's apartment and enjoyed a great dinner of leftovers; we'll only be eating one more dinner in Paris as we'll be gone for the next two days.  Afterwards we played our requisite game of Hand and Foot.   Mary and Jim beat us soundly on the last round!   Part of it may have been that we had a bottle and a half of wine to finish; and I drank more than my share.  But I did sleep really well that night and that is also the reason that you're getting the journal a day late.  I'm writing this on Tuesday evening at our hotel in Normandy just outside the city of Bayeux.
au revoir