THE AMERICAN CEMETERY OF NORMANDY 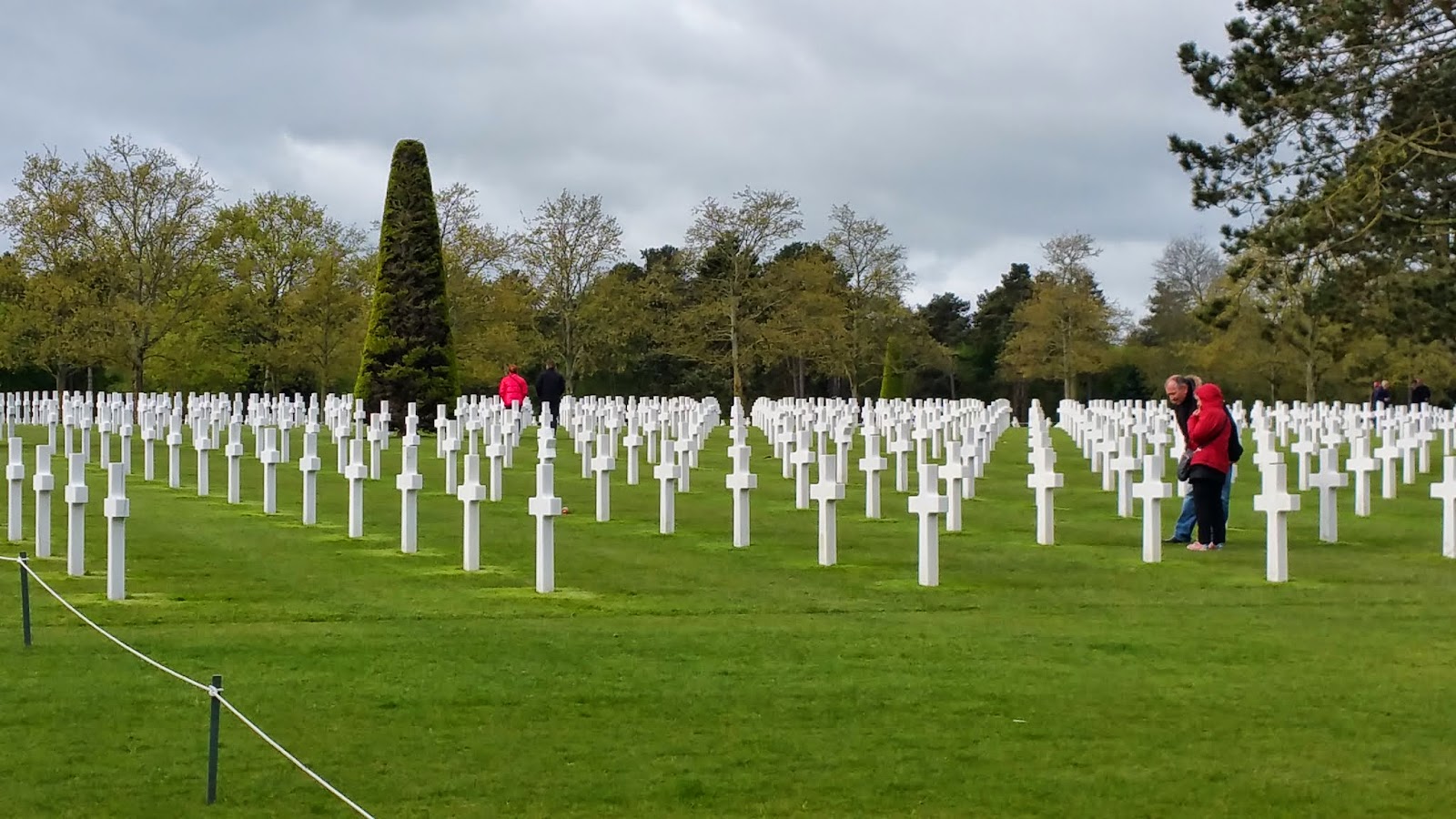 Our hotel outside of Bayeux was very nice last night and we even added the French Breakfast to our bill so that we'd start out the day with full tummies!   It was about half past nine when we left the hotel and headed towards the American Cemetery of Normandy.  We got a bit turned around before finding our way; arriving at the site above Omaha Beach about ten o'clock.  The sun was shining and the wind was blowing very harshly but we were delighted that the rain did not come down until we were leaving the cemetery. 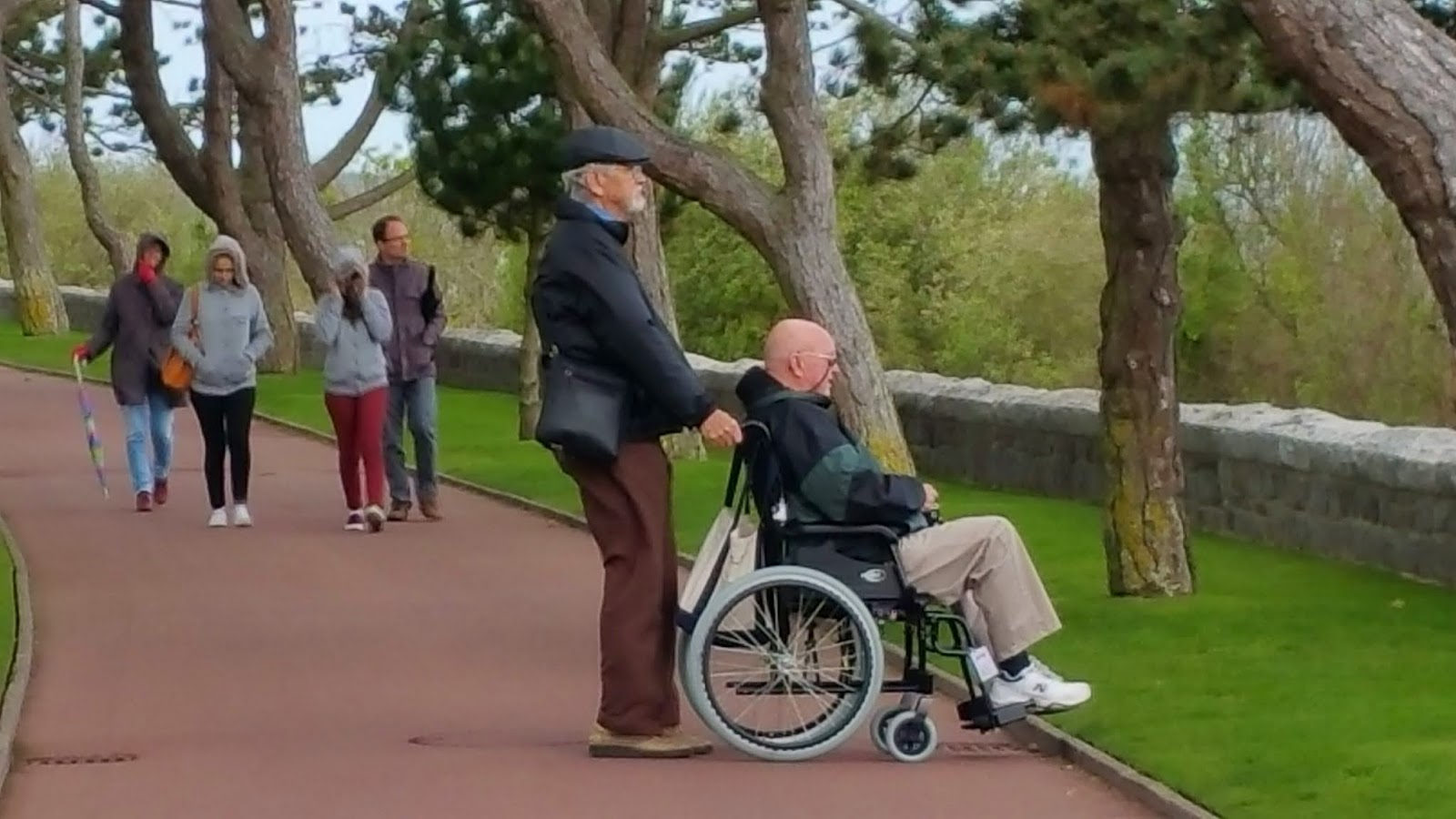 Jim said that one of the most special moments came when he was pushing Phil in the wheelchair and a young french man came up, touched him on the shoulder and said "thank you" softly to each of them.  He probably thought they'd fought in WW II, but they each had their time in the service; Jim right after Korea and Phil was actually in the Vietnam War.   So the thought was much appreciated by both of them.  This visit had much more meaning to them personally than to Mary or to me. 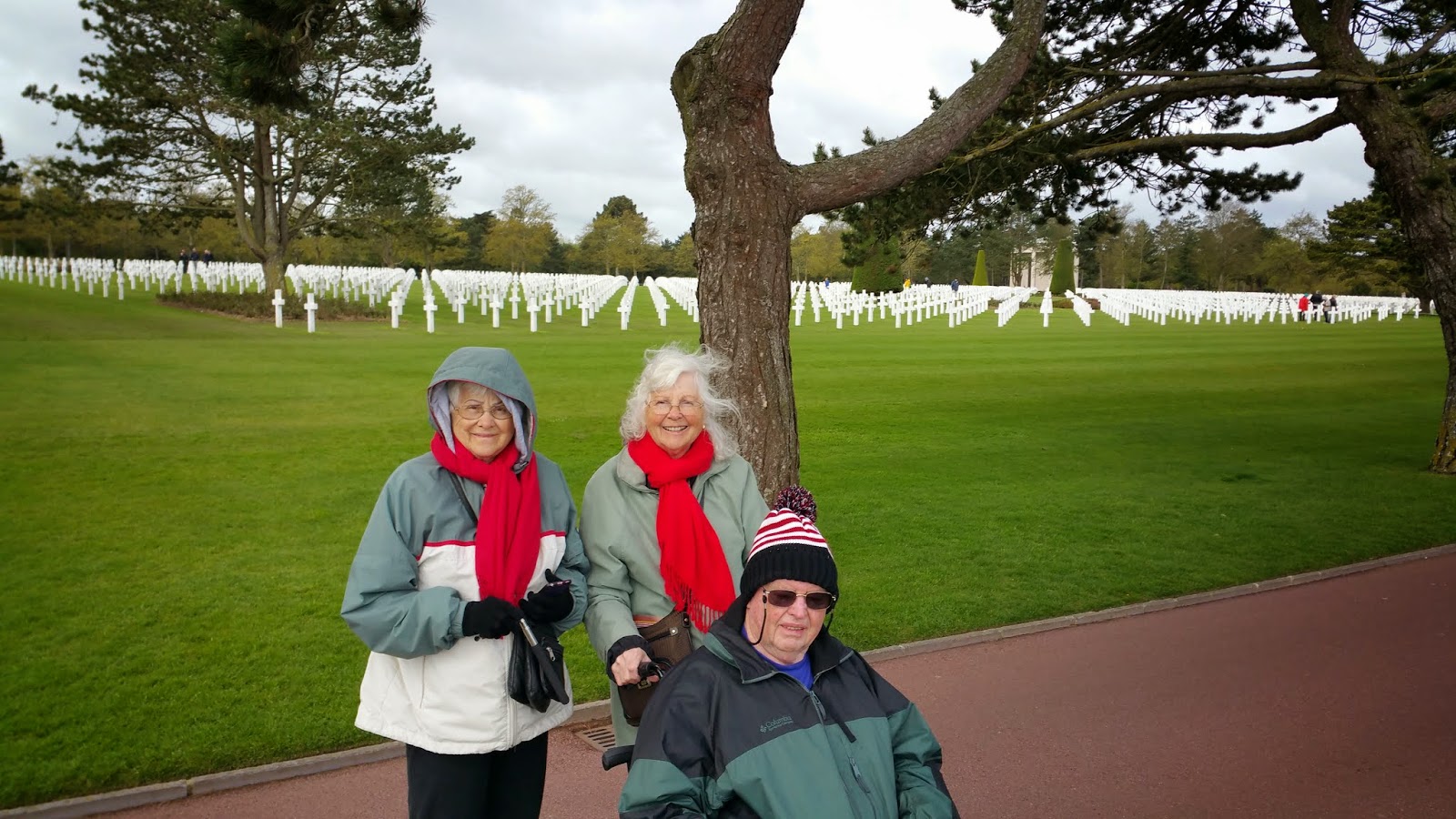 Back in the car before the rain drops began to fall; we drove further west to Pointe du Hoc where The Ranger Units scaled the cliffs.   It's a bit of a walk from the parking lot to the actual site so we mentally said our thank you to the boys, took some photos and continued our day of remembrance.  Yes, we were only youngsters but we all remember those days in the 1940's.   And Phil is feeling the effects of all of the walking that he has done in the past few days.   Yes, he walks and uses his wheelchair as a walker sometimes when he is feeling good. 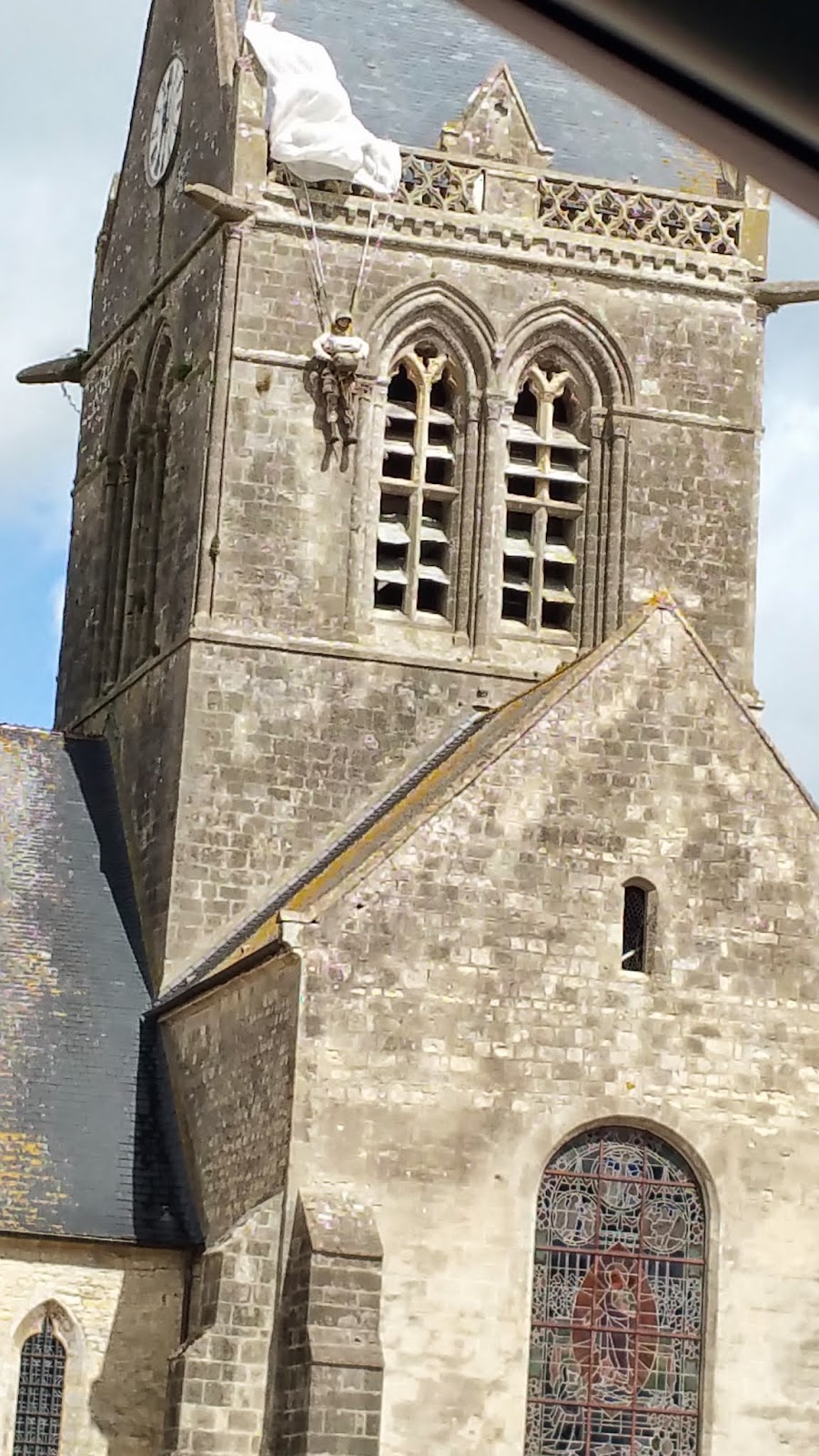 By half past twelve we were at Sainte-Mere-Eglise where the soldier hung all night on the church steeple when it caught his parachute.  The moment was added to a movie starring Red Buttons and called "The Longest Day" about the D-Day Invasion.

You'll see a new monument that is very unusual in the slideshow; a huge silver woman symbolizing Peace I think.   Very modern and unusual.   Not my cup of tea but the boys loved it!

On our return trip towards Caen we made several serendipity stops; first one was at a German Cemetery along the highway called German Cemetery at La Cambe.  It was actually an American Cemetery until 1947 when those bodies were shipped home to America and they moved the German bodies into the cemetery.  They have a book listing all of the men buried and we found five Brockmanns (my maiden name), seven Benders (Phillip) and nine Jansens.  We are all of German descent several generations back. 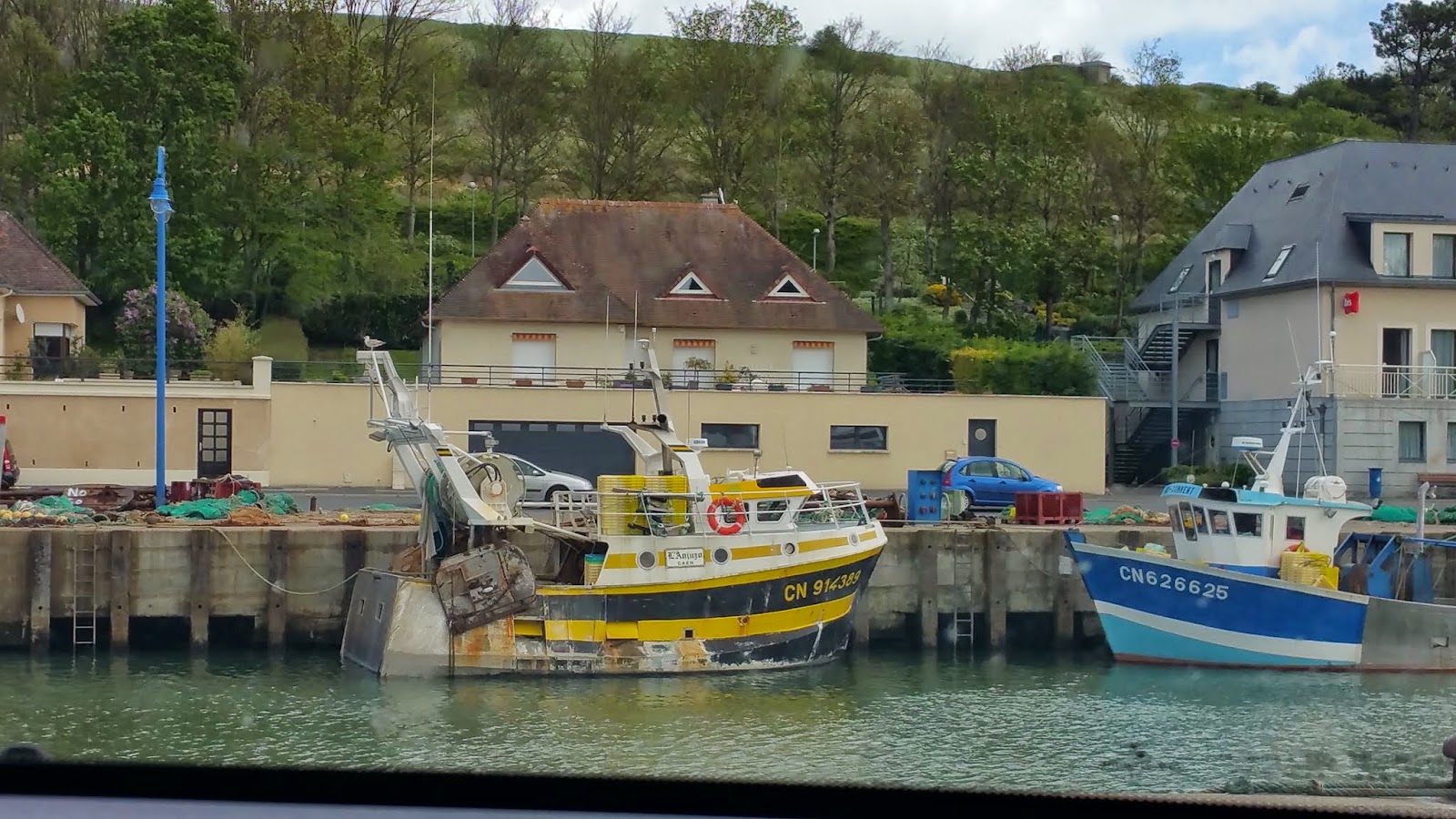 Our second stop was at the fishing village of Port En Bessin that is right on the English Channel.  Found the fish market and many little shops.  The boats were done for the day and tied at the docks.  From there we went off at Bayeux and enjoyed driving through the Centre Ville admiring the half timbered buildings and tiny shops along with the Cathedral.

Soon we were back on the highway and the rain came in buckets for a short time.  Happily it was sunshine again when we reach Caen and returned the car before walking across the street to the 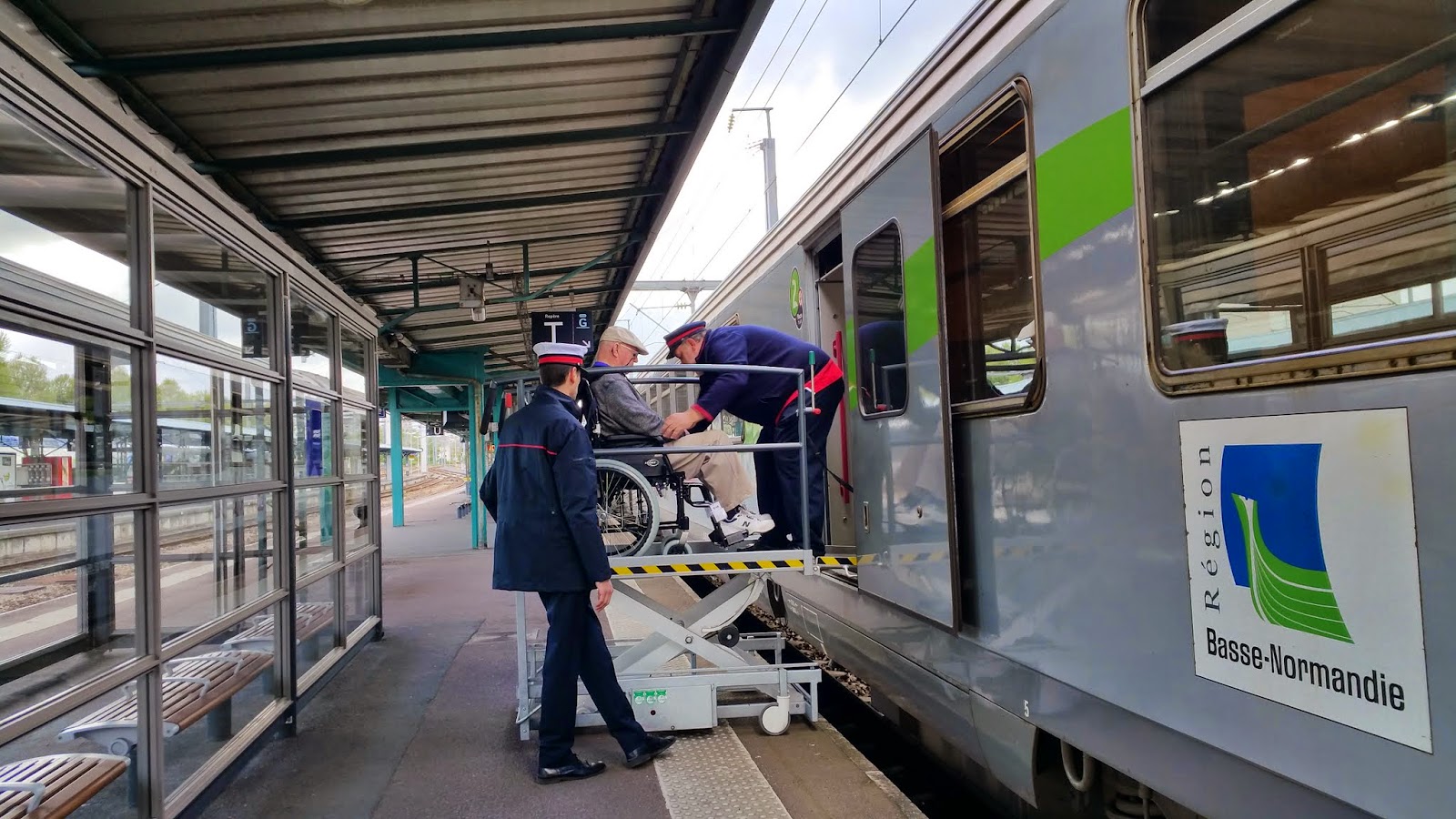 train station.   There we checked into the Assistance for Handicapped and when the time came, Phil was once again put on a lift and into a special car for wheelchairs.  They are fantastic.  They even called ahead and when we arrived in Paris they had a taxi waiting for us so that they could deliver Phil right to the curb and put him in the taxi before returning to the station.  Marvelous; we wondered if the trains in the USA have such a program for the Handicapped.

By nine o'clock we were all safely back in our apartments and getting ready for our last day tomorrow.  We've ordered our taxi for the trip to the airport early Friday morning and the weatherman says it looks like good weather tomorrow.  Hope you've enjoyed reading about our day.