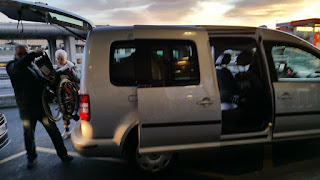 We were all up early and out on the curb by five forty-five in the morning.   The taxi arrived about ten minutes early so by our scheduled six o'clock we were loaded and on the road.   We used a taxi service that we were able to pre-order on the Internet.  And, we were able to specify a mini van that was perfect for all of our luggage and the wheelchair.

By leaving early we saved a bit on the fare since we didn't have the morning commuters that would have extended our half hour drive to possibly an hour and a half.  But, we had to wait for half 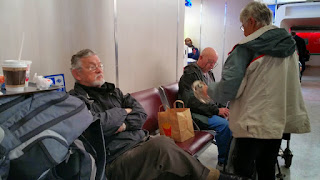 an hour to check-in at the airline counters after we arrived.  Mary and Phil were on US Airways and we were on American Airlines; they were next to each other for check-in so we were able to stay together until they were all checked in.  After going through security; another bonus for arriving early as we breezed through easily with no stress, we found our gate and settled in with free wifi but no electrical outlets that had power.  Lots of outlets but none of them worked! 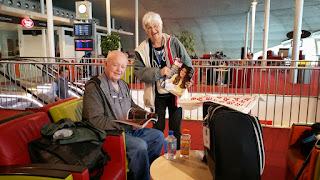 Our gates were a bit of a walk, we were at 50 and they were at 37; just long enough to be a good leg stretch and we each made the trip once to say our final goodbyes.  Our plane was a new one and they had stretched the leg room in the main cabin; a real bonus for the tall men.  Even when the person in front of you leaned back; you didn't feel crowded.  We had a full flight from Paris to Dallas and they kept us busy with movies and two meals.   Great crew with lots of service with a smile!

We generally stay awake coming home because it's daylight the whole way.  This time we have a different experience in that after we'd purchased our tickets with air miles, they changed our flight and we ended up with a sixteen hour layover in Dallas, Texas.  We reserved a room at an inexpensive hotel near the airport with shuttle service.  So we've been able to have some dinner, go for a walk, shower and get some sleep soon.   We have to be back at the airport by five o'clock tomorrow morning for the final three and half hours of flying in LAX.

A pleasant way to arrive rested after a very long trip.  There are storms warnings for the Dallas area tonight.  It may be an interesting night!  And so ends our trip; thanks for joining us on our journey.

American Airlines...stretched the legroom in the main cabin??!! What kind of an aircraft was it? Hard to imagine an American airline giving economy class more legroom! Welcome home!!

It basically requires the general knowledge and also niagara falls night view is one of those activities which are there to be taken care of for me.