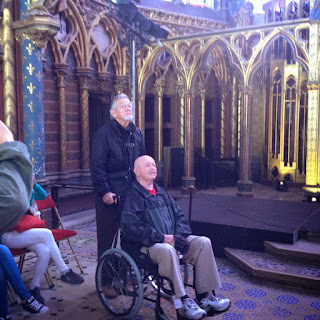 We woke to beautiful sunshine for our last day of adventures in Paris.  Spent some time getting ready for tomorrows trip to the USA and then walked to Mary and Phil's apartment at eleven o'clock.  Jim hailed a taxi and we were off to Sainte Chapelle to see the beautiful floor to ceiling stain glass windows in the top chapel that was built as a home for the "Crown of Thorns" from Jerusalem.   Over the centuries the thorns were removed and distributed throughout Europe but the crown remained in Paris and is now kept at Notre Dame and displayed to the public on special events such as Good Friday during Lent.

The lines were long but because of Phil's wheelchair we were allowed to go through a special entry so that he could use the elevator.  Jim was the caregiver for Mary and Phil and went with them.   Jim has been in the chapel many times over the past twenty years but this was the first time there was no scaffolding inside of the chapel for the cleaning that has been in process for many years.  That, with the sunshine, made this a very special visit for Jim.  Because of the special entry we were limited on the number of people so I elected to stay outside because of the ramps that Jim would have to push the wheelchair up during the visit. 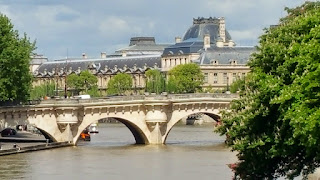 After they returned to the street we walked from there across the Seine River to the Left Bank.  We noticed that the water is running so high there were no boats on the river today; very unusual.    We walked through several of the small streets around St. Michel and ended up at the bookshop Shakespeare and Company and enjoyed the wonderful views of Notre Dame.

Everyone was hungry so we walked back to St. Michel Blvd. to a favorite crepe shop and Jim and Phil each had a jambon and fromage crepe while Mary and I enjoyed a cappuccino drink.   And, 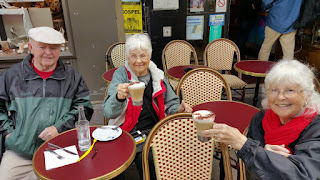 this was also another check mark on the list of things to do:  sit outside of a shop for food and/or drinks and watch the people stroll past.  By the time we finished, Phil was ready to return to the apartment so we hailed a taxi and scooted back to the apartment.  One could really get spoiled using taxicabs but this was the easiest way to get Phil from place to place on his Paris Adventure. 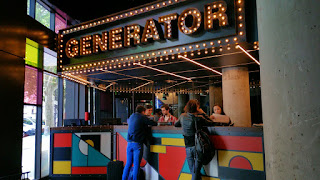 new Hostel called Generator that has just opened.  It really impressed me and I'm looking forward to hopefully staying there at the end of my trip this fall before leaving for the USA in October.  It's a new chain of Hostels all over Europe and although it's in an "edgy" and upcoming area of Paris; their prices are good and it looks great.

Back to our apartment to finish packing and cleaning and then we walked to Mary and Phil's about four o'clock.  We first played our last two hands of Hand and Foot, finishing the game we started on Tuesday in Normandy.    Mary and Jim won! 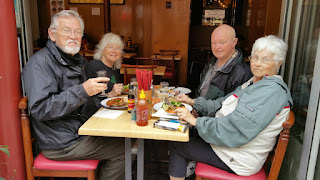 Then we headed out about five thirty for an early dinner.  We intended to eat at the Italian Restaurant on their street.  Oops....all of the restaurants were closed from four to seven o'clock!   One exception:  The Chinese Restaurant....so we enjoyed our last dinner in Paris at the Chinese Restaurant with the windows open to the street and it was just warm enough to enjoy the ambiance!   I must say that although rain was predicted for every day of their short vacation; we've had beautiful sunshine ninety percent  of the time!  God has been good to us.

We're back in our apartment after helping Mary strap up the wheelchair for shipping as baggage but leaving it so that he could still use it as a walker until he has the airport wheelchair.  We used two luggage straps and lots of plastic ties.  Tomorrow we will walk the five minutes to their apartment and the taxi (van) will pick us all up at six o'clock in the morning for our trip out to Charles de Gaulle Airport.    I'll probably do a wrap up blog after we get home, so for now ...  au revoir

Very nice blog and great pictures. I will be seeing next entries.
Everyone is invited to see my blog entries at this address