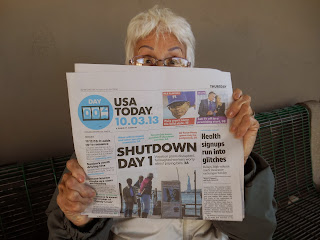 October 3, 2013
(You will be reading this late as we had internet problems in Assisi!)   We woke very early in Cortona; excited about our next adventure.  We walked up to the Piazza for some last minute internet compliments of Bar Signorelli; a good connection in a very empty square!   While we were there we stopped in the Tabac Shop and purchased our bus tickets and a new USA Today Newspaper to read on the train. 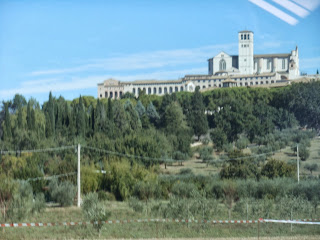 We decided to walk to the bus stop early and found the blue bus waiting when we arrived.  Hopped on this earlier than planned bus and enjoyed our ten minute ride to the train station in the town at the base of the hill.   Checked the schedule and found out that there was a train headed our way at 9:15 am; an hour plus earlier than planned.  One stop and we had to change to a new train for the final leg to Assisi.  The whole trip lasted for less than two hours.
Soon we were in the queue for the bus up the hill to Assisi; tickets in hand.   The first bus was too full and while we waited for the next bus; we saw the taxicabs arriving regularly.  I asked how much to the San Francesco Basilica? 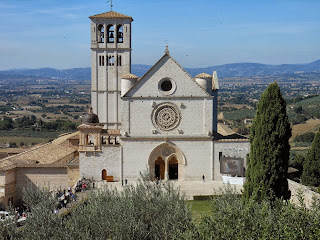 He said 15 euro and I said “sold”.   It was a good thing because we found later than it was still a long walk uphill from the bus stop at the top of the hill!   Traffic was terrible; the Pope doesn’t arrived until tomorrow but there are thousands of people.  We checked into our B&B; gathered what we needed and headed out the door.   The host had saved a map of the city with all of the stops for tomorrow marked.   An interesting note is that our actual rooms are some two hundred plus steps further up the hill than the office that is located on Via San Francesco.  We were surprised at first but they did help carry our luggage up the many steps; and we’ve since found that it is really a lovely location and quiet which is nice.  And breakfast is included which is a nice plus. 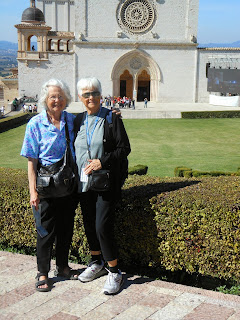 Today we would visit nearly all of the dozen stops where the pope would either have private visits and/or have a public function.  Everything was open to the public; many police were everywhere and all of the manhole covers have been marked with an orange four inch strip of paint.  Not sure why unless it indicated that they’d been inspected.  We spotted many small groups of people in matching orange shirts and gray dress trousers; most were young people.  When we saw them using their cell phones near Cathedrale Di San Rufino; we asked if they had wifi and they laughed and said “yes”.  They told us how to connect and soon I had wifi on my Samsung II cell phone as long as I stayed in one spot on the street!   We asked where they were from and learned that it is a student tour group from Chili.   We walked from noon until 5 pm but visited six of the most important sites.  A fun afternoon but tiring.
Breakfast had been very early in the morning; lunch was a boiled egg (from Cortona) and bread.  Dinner was a slice of pizza and a shared beer!   And, we enjoyed ice cream twice during the day.  The weather was absolutely beautiful all day, but by evening when we went out to see the night lights on the San Francesco Basilica our coats felt good.  It was beautiful to see the calm before the storm! 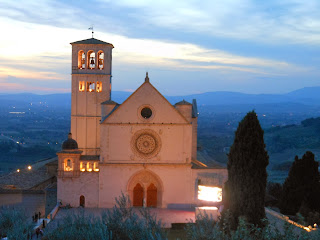 Snug in our B&B, our only complaint was the lack of wifi that worked.  My Samsung II cell phone is our only connection with the world except for the Italian cell phone.  But with that we were able to send emails to let the family know that we are safely in Assisi.  Mary’s apple and my Vista 8 are just too new for the equipment provided.  We are supposed to be given a data cord sometime today!   Hopefully that will at least allow us to get my computer online.
A long day and we’re very tired so I’m signing off.  Hope you enjoy the slideshow when it finally arrives:
Posted by Martha at 6:29 AM