Our Travel Day...The Train to Cortona 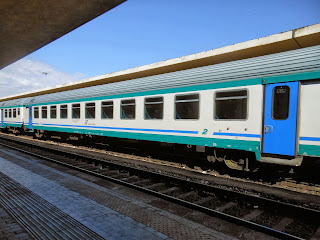 Bonnie and Jane left the apartment at 7:30 am in a taxi that our apartment owner, Marzia, had arranged for us last night.  We had several hours to work on projects such as checking all the bank accounts and credit cards online for some general bookkeeping before it was time for us to leave.
At 10:30 am Marzia arrived for the checkout, we were well prepared; then our taxi arrived to take us to the train station.  Marzia has a wonderful apartment very close to the city center and I’d highly recommend her apartment to anyone visiting Siena.  She can be found on airbnb on the internet.
By 11:00 am we were at the train station; verified the time for our train and then I headed over to the shopping mall.  Yes, the Italian cell phone was still not working.   The clerk waived his fingers over the computer and within minutes told me that it would be working within the hour.  He probably forgot to do something yesterday.   I had no choice but to trust him and headed back to the train station. 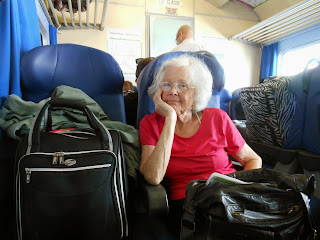 Just before our train left the station; the phone began to work!   I quickly left Bonnie and Jane a message and also called our new landlord in Cortona, Simone, to let him know that we were on the train and would arrive in time.  We had to change trains in Chiusi; only a short wait.  There we got to know an American couple from Spokene Washington a bit better.  They were also traveling from Siena to Cortona.   Better packed then we were, they each had a backpack for their month long trip.  They offered to share a cab with us in Cortona as the train stops at the bottom in the new town.   They were favorably impressed when we told them that our landlord was picking us up at the station. 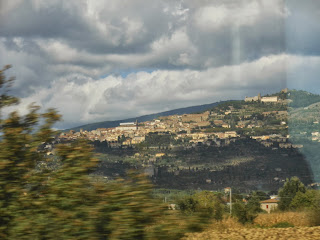 Soon we’d arrived and Simone, who also is a professor at the University in Florence; was very kind and agreed to call a taxi for the stranded Americans who were there with us.  He was in the process when the bus arrived and they decided to go by bus after he explained the difference in the cost.  The train station is closed permanently and there were no taxis waiting for the arrivals. 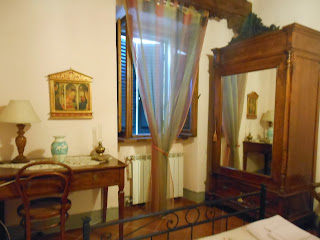 Our apartment is on the ground floor of a building that is over a thousand years old.  It is full of beautiful antiques and beautifully furnished.  We have two bedrooms, a large kitchen, living room, very new bathroom with a large shower.  The ceilings are open beamed.  We have a beautiful patio that would be lovely to eat in if we were staying longer.  It’s a shame we’re only here for two nights.   There was fresh fruit in a bowl, wrapped bread sweets, drinks in the refrigerator.  It was like we were visiting a good friend and not just renting an apartment.  We are less than a five minute walk to the center of the village.  We’re been back and forth twice already and are going back up tonight for dinner at the Bar Caffe Signorelli. 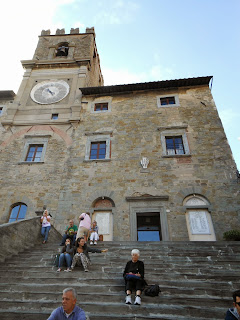 The only thing our apartment lacks is wifi; so we are sitting on the steps at the town hall using the free wifi compliments of the Bar Caffe Signorelli.   We will take the computers back this evening and post our blog; but just in case we don’t; I’ve preserved the right date by doing a mini post while we were there earlier this afternoon…a trick I’ve learned from sister Mary.
Tomorrow we are taking the twenty minute walk to see the summer home of the author Frances Mayes who wrote “Under the Tuscany Sun”.   She is living here sometimes up to six months a year with her husband in their home that is “on the wrong side of the mountain and in the shade after 3:00 pm”, per the tour book.  We’ve been told that she is in residence right now.   We will also be visiting several churches.   It will be a full day and then after a good night’s sleep we will be off to the train station and Assisi.
Hope you enjoy the slideshow: