Travel day from Roma to Napoli to Sorrento 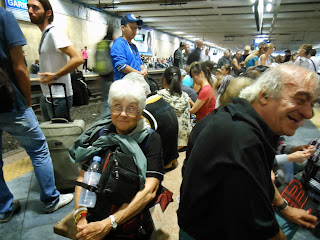 We enjoyed our night in the dorm at The Beehive in Rome; an eight bed dorm with four sets of bunk beds.  We actually were assigned the same set as we used back in 2009 during our stay at the same Hostel.  Mary had the bottom bunk and I took the top; there was a cute note on each bed welcoming us back and a piece of candy! 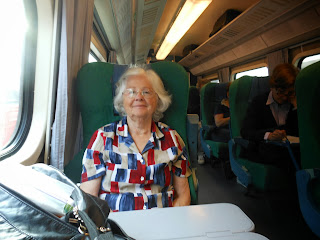 Mary had gone to bed at 9 pm and was awake from 4 am on she said.  I’d gotten to bed about an hour later and slept until 6:30 am.  We’d purchased bananas and cereal loaded with dried fruits to eat as our breakfast on the train this morning; but could not resist the breakfast offered by the Hostel in their small restaurant in the basement.   A cheese omelet with vegetables; toast and coffee.  Delicious and we were glad that we started with a full tummy before the day was over!
Walked to the Termini train station at eight thirty and our train left promptly at nine thirty; we had assigned seats on this train.  It wasn’t overly crowded and we enjoyed facing single seats with great window views.  I’d locked the luggage together and stored it in the luggage area at the end of the car; a constant worry for Miss Mary.  But it was fine and we arrived right on time in Naples at 11:43 am. 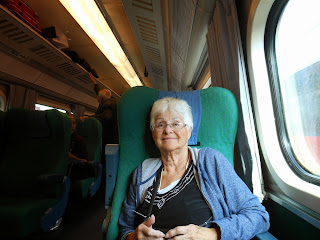 We walked over to the stairs down to the Gabrielle Station that also has the local train to Sorrento called the Circumvesuviana.  I asked a policeman at the top of the stairs to confirm I was correct before we headed downstairs.  “No train today” he said.  “Lundi Strike…no trains”.   It is very common in Europe for one day strikes; so I wasn’t overly surprised; but we had reservations starting today in Sorrento.   We walked over to another gentleman who spoke excellent English and he seemed to think that we could get a train.  Otherwise we’d have to look at finding the boats, a bus or hiring a taxi.  None of these were appealing for both price and finding them.   I left Mary at the top of the stairs with all the luggage and headed down to check things out.    I did find the ticket booth and there was one window open with a long line that appeared to be selling tickets.  I asked one girl and she said they said there would be one train in an hour.   So back upstairs to get Mary and off we went; with a stop at the WC first; it could be a long day before we saw one of them again. 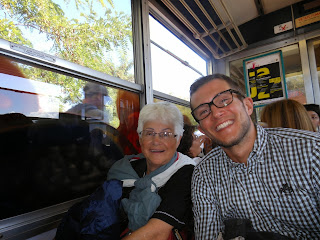 Got back to the ticket window and the girl sold me two tickets and assured me that there would be one train at 1:11 pm on Track # 3.  Down we went to the platform #3 that was already packed with people.  I did find Mary a seat on one of the few benches.  It was now about 12:30 pm.   The platform continued to fill with people and luggage until there was no room left.  At 13:05 a train pulled in and the crowd surged forward; the train was full when it arrive but people started climbing on.  There was no way we could have gotten into that train and soon it pulled away to the dismay of the crowd.
But we soon all realized that the train we were waiting for had not arrived yet. Right on time it pulled into the station and again was already full of people.  Mary and I had positioned ourselves right at the yellow line and we were very lucky in that the door into a car was only a few feet to our right when it stopped.  The crowd surged but we held our ground and slowly inched our way to the door; Mary was behind me…not the original plan…and she was pushing me and others were pushing her and me.  But, we got inside the door; barely inside; and could move no more.   When they kept yelling at us to move; Mary said, “I can’t move!”   And the fellow said in American English…”Okay” and the bumping stopped.  There was no way either one of us could fall as we couldn’t move. 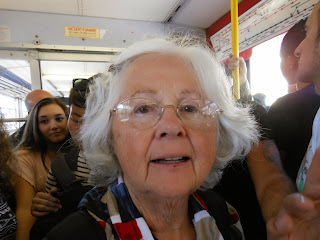 With each stop a few more left the train and within two stops Mary was to the door into the seating area and some wonderful Italians moved so that we could get her into a seat.  About half way down another seat opened up and I also got to sit down after removing my backpack for the balance of the trip.  We had called Jane and Bonnie in Naples so they knew why we were late.
Arrived about 2:30 pm; Bonnie met us while Jane finished up their laundry that they were doing.  We walked to the Piazza Tasso that is located just above the Marina Piccola where our apartment is located.  Waiting a few minutes for a bus, for a Euro we rode down into the marina.   There we located the property manager in the B&B that takes care of our apartment.
Bonnie and Jane have decided to stay in their hotel where they’ve been for the last week, so Mary and I have a two bedroom apartment to ourselves.  It overlooks the Marina where everyone comes to leave by boat to Capri; a very busy place.    We are up four flights of marble stairs but the views from the windows are wonderful.    The manager carried my big suitcase up and I took Mary’s small case; very nice of her as I was not looking forward to the job of getting it up the stairs.   We also found that we can go to the B&B and use their wifi.  Hopefully that will work tomorrow. 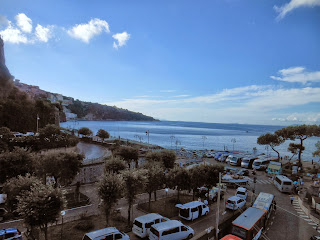 Jane finally caught up with us and after putting everything in the apartment, we all enjoyed drinks at the bar/restaurant just outside of our building.   Then off to find the elevators that go up to the top of the bluff; fun but kinda out of the way.  But, we did see the swimming area with a small beach on the way to the elevators.  I think we’ll probably always take the bus that stops right outside of our building.   The weather is wonderful but rain is predicted for tomorrow.
We walked to Bonnie and Jane’s Hotel:  Hotel Settimo Cielo, Touch of Heaven, and they absolutely love it.  It is a good fifteen minute walk slowly uphill from Piazza Tasso; and with stops for the views it took us half an hour.   They have a lovely room with a view and a nice patio they can sit on.  Also there is a swimming pool that they’ve enjoyed.  We used their wifi to send messages home to family and I actually talked with Jim for a bit but could not reach sister Betty. 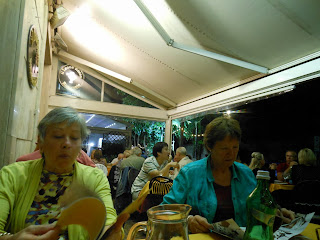 Back down to the town to a restaurant that they like near the train station.  We checked the pedometer and found that it was about a mile and a quarter from the hotel to the train station; a twenty five minute walk mostly downhill.
We enjoyed pizza and wine for dinner at Il Leone Rosso Ristorante; Bonnie and Jane treated us; and then Mary treated us to gelato at David’s Gelatos next door where they had taken a class on how to make gelato ice cream last week.
We left them at the Piazza Tasso and walked to our bus stop.  After a bit Mary agreed to walk down.  It was an easy walk and we’ve decided that we’ll continue to walk down and only use the bus for going up the hill!   A day full of surprises and new experiences ended well.  Hope you enjoy the slideshow:
Posted by Martha at 4:28 AM

Sounds like you had a fun adventure yesterday. Say hello to Bonnie and Aunt Mary from us. We are, as always, very busy with kid activities.