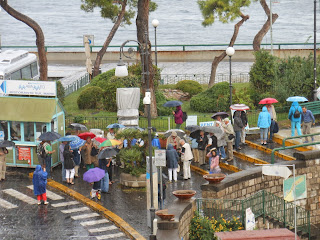 Ah yes…another rainy day.   We woke to cloudy skies but still did our laundry; Mary hung her things on the rack on the small balcony.    By eight o’clock the rain started and we moved the laundry inside.  It would stop occasionally but continued until noon.    I finished my laundry and we had wet clothes hanging everywhere.  It’s still drying as I write this more than twelve hours later!  Some of the rain came down in torrents; we had some lightning and thunder but not much.  We overlook the Marina and we were kept busy during the storms watching the hundreds of tourists that arrive to catch their boats to go to Capri for the day.  Not a good day to do that but if you have only one day and/or on a tour; not much choice. 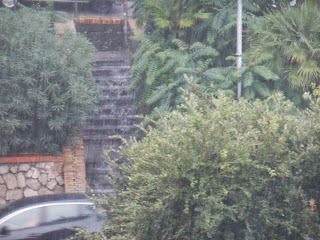 Across from our window we could see stone stairs leading down from the road; it became our own personal waterfall, rivaling Mother Nature’s best.   We had lots of fun filming the crazy people with their umbrellas.  So glad we had the choice not to be one of them.
About noon the weather started to clear; still many clouds all day, never sure if it would start again or not.   We had worked on yesterday’s photos and blog all morning so we were prepared for our wifi time.   Packed up the computers in plastic just in case we got caught in a sudden downpour and walked around the block to the B&B named:  73 Marinapiccola Settantatre. 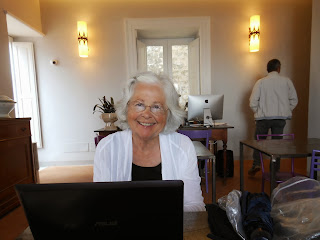 They do the property management for our apartment and we were given the password to use their Internet system.   We enjoyed ninety minutes of wifi while sitting in their beautiful lobby with views of Mt. Vesuvio; the volcano that covered Pompeii so many years ago.   And the Bay of Naples with a view of Naples as tiny dots on the horizon.

Soon we put away our toys and headed for the bus to go up to the top and do our grocery shopping.  Afterwards we met Bonnie and Jane at the coffee shop in Piazza Tasso where they were just finishing their late lunch.  Spent about half an hour there and then they walked down to the apartment with us.  Jane had not seen the inside yet.  They’ve agreed to have dinner with us one night. 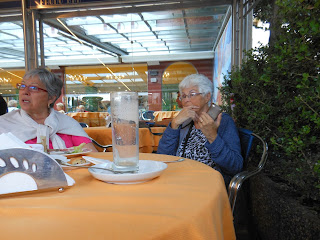 After they left to spend the rest of the afternoon exploring the back streets of Sorrento; it was already after four o’clock; we sat for a while and enjoyed CNN on the television that had finally decided to work!  Maybe we just touched the right buttons with Jane’s help!   But it was nice to catch up on the USA news especially with the government shutdown updates.
We enjoyed a late dinner from our grocery shopping after I walked back to the beach below the B&B and was able to get Skype to work for calling home and talking to Jim.   I’d been trying all day with no luck so it was good to get such a good connection that lasted for quite a while without cutting off. 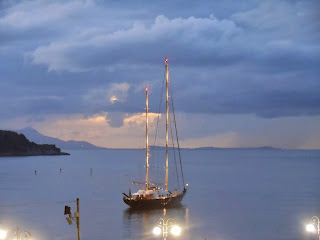 It was a good day; expecting more rain tomorrow; then possibly a dry day on Thursday.   We’ve enjoyed the rest day and actually wouldn’t mind one more.  Hope you enjoy the slideshow:
Posted by Martha at 6:29 AM